ABSTRACT: Lichens came as a consortium of two distinct and dissimilar components- the mycobiont and the phycobionts, which were defined as a composite organism. Lichen vegetation in India is dominated by more than 2500 species. Lichen secondary metabolites specially the phenolics, depsides and depsidones are unique in their origin and are found nowhere else. Much attention has been paid on the biological roles of lichen secondary substances in the recent past; which have been found to possess a lot of bioactivities, such as anti-tumor, antibacterial, antifungal, antiviral, anti-inflammatory and antioxidant activities. The present study aims on the bactericidal activity of lichen, Cladonia scabriuscula, collected from the Gopeshwar, Uttarakhand in the Western Himalayas. The 50% v/v ethanolic extract (CSE) extracted through cold extraction method was tested for its bactericidal potential against prevalent water borne pathogen and its antioxidant potential through CLSI protocol. The CSE was found active against E. coli and S. typhimurium with MIC 2.48 and 1.02 mg/ml respectively; while the FRSA IC50 was 0.625 mg/ml.

INTRODUCTION: In the course of evolution on Earth, the lichen came as a result of mutual inter-relationship of algal and fungal cells. Thus, lichens can be defined as composite organism consisting of two distinct and dissimilar components- the mycobiont and the phycobionts. There are more than 20,000 known lichen taxa. Since the fungal constituent usually dominates the association, lichens traditionally have been considered as a lifestyle of fungi 1.

Erik Acharius, who was the last student of Swedish naturalist, Carolus Linnaeus (1707- 1778), and is acclaimed “The father of Lichenology”, a Physician by profession, studied the specimens collected by Linnaeus and created many new genera and documented his work in Licheno-graphiae suecicae prodromus (1798); Methodus lichenum (1803); Lichenographia universalis (1810) and Synopsis methodica Lichenum (1814).

In the recent past, much attention has been paid on the biological roles of lichen secondary substances; which have been found to have a lot of bioactivities, such as anti-tumor, antibacterial, antifungal, antiviral, anti-inflammatory and also antioxidant activities 4. In the folklore of many European countries, lichens were used as a remedy for pulmonary tuberculosis and in the treatment of wounds and skin disorders. Burkholder reported for the first time the presence of antibiotic substances in lichens 5. Several lichen metabolites were found to be active against Gram-positive organisms 6. The anti-mycobacterial activity of lichen compounds was reported against non-tubercular species of Mycobacterium 7. Lichen extracts have cytotoxic activity in different degrees. The aqueous extract of P. polydactyla and the ethanol extract of the R. farinacea exhibited potent antibacterial activities 8.

On the other hand, the global environment is day by day getting polluted and unhygienic for humans, by anthropogenic activities. The vital life resource, water has become so polluted, that getting potable water from natural sources is now literally not possible. Waterborne bacterial pathogens, such as Escherichia coli, Vibrio cholerae, Salmonella typhimurium, Klebsiella pneumoniae, Shigella dysentriae, etc. have possessed threat to the life of many people residing in the villages, slums, chawls, etc 9. Reports on the antibacterial activity of the medicinal plants have flooded the scientific arena 10, 11, 12, 13, 14. Current study focuses on the antibacterial activity of lichen, Cladonia scabriuscula against prevalent water borne pathogen and its antioxidant potential.

a. Collection of Lichens and Extraction of Metabolites: The lichen Cladonia scabriuscula (Delise) Nyl. is widely distributed in all temperate regions of Uttarakhand, Sikkim, Tamil Nadu, Nagaland and West Bengal. The specimen for the current study was collected from Gopeshwar, Uttarakhand; on the way to Badrinath, at an altitude of 1500 - 1700 meters. The specimen was identified by Dr. D.K. Upreti, Chief Scientist, Lichenology Laboratory, NBRI, Lucknow. The voucher specimen for LWG Herbarium was LWG-014583. The thallus primarily is squamulose, 1-3 mm X 1-2 mm dimensions. Podetia up to 3-8 cm tall, 1-2 mm in diameter. Colour of the thallus is greyish to greenish white, corticated podetia with scaling off to form squamules of the thallus. Apothecia are present, brown coloured, on lateral branches and at the apices Fig. 1a.

Fumeroprotectraric acid is the main compound present in the thallus. The extraction of the metabolite was done by soaking 5 gm of lichen thallus in 50 ml 50% v/v Ethanol (CSE), overnight. The filtrate obtained by Whatman no. 1 filter paper was condensed in Rotary Evaporator (BUCHI). Further, the crude extract dried, weighed and kept at 4 °C in refrigerator. Percentage yield was obtained as follows:

c. Antimicrobial Assay: The susceptibility of the water borne pathogen against the CSE was performed by globally accepted NCCLS, now CLSI (Clinical and Laboratory Standards Institute), recommended broth micro-dilution method 15. Briefly, in a 96 well microtitre plate, a series of dilution was designed for CSE was made in 4th to 11th well in duplicate, to assess the inhibitory action against the pathogen. To minimize, the effect of broth medium and experimental drug, a media control well in 2nd column and 3rd column wells respectively. A negative and positive growth control well was also assigned to 1st and 12th column wells, as well Fig. 2. Results were obtained in form of 50% age Inhibitory Concentration (IC50) and Minimum Inhibitory Concentration (MIC). Stock solution (50mg/ml) of CSE extract, was prepared in DMSO. In brief, the initial bacterial inoculum suspension was prepared as per 0.5 McFarland standards (corresponding to a CFU of 1.5×107 cell/ml). The MIC and IC50 mg/ml values were obtained spectrophotometrically by (SpectraMax Plus384, Molecular Devices Corporation, USA) at 492 nm, after an incubation of 24 h at 35 ± 2 °C. 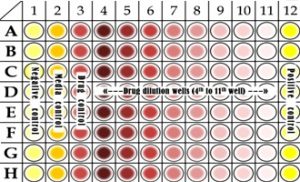 d. Free Radical Scavenging Activity: DPPH assay- The lichen extract was also tested for its free radical scavenging activity (FRSA) by DPPH assay protocol 16. DPPH (2, 2- Diphenylpicryl-1- picryl-hydrazyl) produces free radical in the solution when dissolved in methanol. The reducing power of the lichen extract is thus examined by this assay. The CET from Cladonia scabriuscula, was tested with Ascorbic acid (Vitamin C), taken as Standard. Result was expressed in form of IC50 obtained from the percent inhibition of free radical as FRSA.

RESULTS: Results were expressed in form of IC50 and MIC (mg/ml), based on the turbidimetric results obtained in form of optical density and statistically analyzed by SOFTMAX PRO software- Spectramax Plus 384, Molecular Devices, USA. The CSE, was found active against Escherichia coli, Salmonella typhimurium, Vibrio cholerae, Klebsiella pneumoniae was depicted in the form of IC50 and MIC values Table 1 and Fig. 3. 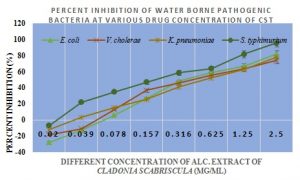 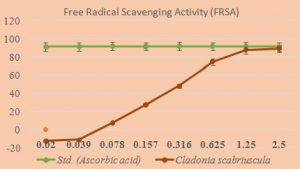 DISCUSSION: With the ever changing world, the microorganisms are also evolving day by day. As the time passes on, pathogenic microbes develop resistance against several classes of antibiotic. At this stage several medicinal plants have shown promising results in the treatment of water borne diseases like diarrhea, dysentery, etc. caused by bacteria. Above results clearly indicate that, CSE was highly active against E. coli and S. typhimurium. Ethanol helps to maximize the extraction of effective phenol acids, here fumaroprotectoric acid. Variability in the MIC may be attributed to the phylogenetic position of the various pathogens 17. The herbal extracts have no side effects as compared to the synthetic drugs and thus are preferably a better alternate. Lichen metabolites are unique and have high degree of antimicrobial potential as compared to other herbals.

Lichen Cladia aggregata was tested for its chemical characterization and antimicrobial activity of barbatic acid and was found active against S. aureus 18. Effect of several herbal plant based medicine are in practice for the development of many herbal drug in a market for consumption purposes. With the range of these views and several properties of the Tridax procumbens L. as well as Lippia nodiflora L. were tested and showed antibacterial activity against both gram-positive and gram-negative bacteria 9, 10.

The phenolic compounds and their derivatives in lichen have been proved to be detrimental for pathogenic microbial fauna. These substances generally acidify the microbial cell wall and consequently, cause cytoplasm membrane rupture, inactivate or immobilize the enzymes, and interfere with physiological functions such as electrons transport, oxidative phosphorylation etc. 19, 20, 21. In a study, on antimicrobial activity of atranorin, it was elucidated that it showed high bactericidal activity values ranging from 5 µg to 70.7 µg/ml and this value also varied from genus to genus, as in case of Cladonia foliacea (15.6µg to 500µg/ml) 22. While, another finding based on the cultured lichens, showed mycobiont and photobiont culture of U. ghattensis and A. awasthii have high antioxidative and antibacterial potential 23. In the current study also, the lichen CSE has an FRSA count of 0.625 mg/ml (IC50), which is a value addition to its bioprospective attributes. Reports on concentration dependant antioxidative activity of lichen metabolites; salazinic, sekikaic and usnic acid. Salazinic acid showed 17.2 to 20.5, sekikaic acid 13.7 to 17.4, and usnic acid 18.8 to 25.5 as IC50 (μg/ml), have also been observed, which indicated lichens as comparatively better natural antioxidant and a good replacement of synthetics 24.

Many path-breaking studies have come recently, focusing on the drug loading capacity of herbal compounds derived from lichens as well their capacity to fabricate nanoparticles. These novel antibacterial compounds have potentiality to not only kill the bacteria but also can be used as an effective drug loader or carrier 25, 26, 27, 28, 29.

CONCLUSION: It is clearly evident from the above results that fruticose lichen, Cladonia scabriuscula 50% v/v ethanolic extract (CSE) has marked antibacterial potential against a wide range of water borne bacterial pathogens, which possess threat to health of human beings in diverse localities, where potable water is still a big problem. Its antioxidant potential is a value addition to its bioprospective values. Moreover, bioprospection should not be limited to mere exploration of the novel antimicrobial agents but should lead formulation development. Thus, present finding strongly supports CSE as a possible alternate of synthetic therapeutic agents after organoleptic analysis, currently in progress.

ACKNOWLEDGEMENT: Thanks are due to the Head of Department of Botany, University of Allahabad for laboratory facilities, to Dr. D.K. Upreti, Chief Scientist, NBRI for lichen identification and CSIR, for financial assistance.

CONFLICT OF INTEREST: This work is a sole outcome of experiments done at Biological Product lab., and authors have no conflict of interest for this work.