INTRODUCTION: Parkinson’s disease (PD) is one of the most common neurodegenerative diseases in the world at present which lies next to Alzheimer’s disease (AD). Gradual loss of cognitive dysfunction and motor disability are the main hallmarks of PD 1. Bradykinesia, rigidity, and tremor are considered as the most common symptoms of PD 2.

The PD prevalence rate at present is 1-2 per 1000 of the population in the world 3. Degeneration of dopamine neurons in the substantia nigra is the main causative factor behind PD 3.

Neurodegeneration of dopamine neurons in PD occurs due to environmental factors, aging or due to genetic reasons 3. Also genetic reasons may drive both familial as well as sporadic incidents of PD3. Alpha-synuclein (a-synuclein) gene mutation is one of the major genetic factors responsible for PD pathogenesis 4. Misfolded a-synuclein leads to insoluble protein inclusions called lewy bodies and lewy neurites located either in neuronal cell bodies or neuronal processes that causes neurodegeneration 5.

Recent research has strongly highlighted dysfunction related to kinase activities and phosphorylation pathways about PD pathogenesis 4. Inactive protein tyrosine kinase (c-Abl) can be activated by cellular stress and DNA damage, which causes increased reactive oxygen species (ROS) production and ultimately leads to dopamine neuron cell degeneration 6. There happens to be a link between c-Abl and a-synuclein in neurodegeneration, as c-Abl phosphorylates a-synuclein and impedes its clearance, whereas a-synuclein overexpression increases c-Abl activity, compromises autophagy and leads to lewy body formation 7. Ultimately, the formation of lewy bodies containing dysregulated a-synuclein contributes to oxidative stress, mitochondrial dysfunction and neuroinflammation, which are the other major etiologies of PD Fig. 1. Hence, drugs, in particular, the combination of drugs targeting c-Abl over-activity and phosphorylation as well as mitochondrial dysfunction seem to hold great potential in reducing the complications such as the decline in cognition and motor activity in PD.

The currently using drugs such as levodopa (L-DOPA), dopamine agonists, monoamine oxidase (MAO) B inhibitors, anticholinergic agents, amantadine and catechol-O-methyl transferase (COMT) inhibitors, are not sufficient in terms of effectively addressing the long term complications like cognitive dysfunction and motor dysfunction8. In the current study we are using a combination of c-Abl inhibitor; dasatinib and a strong antioxidant; resveratrol and evaluate its efficacy in improving cognitive dysfunction by estimating learning and memory, motor dysfunction by evaluating motor coordination and also estimating the level of anxiety. 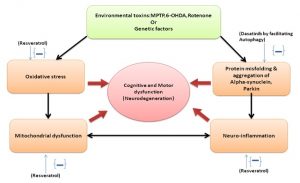 Spontaneous Rotation Behavior: Rats receiving ST infusion were intensively observed for any abnormal activities during the first 72 h. One of the striking features following recovery from anesthesia was spontaneous circling. The animals were kept in transparent cages following surgery, and the spontaneous rotations in the cage were counted throughout one hour.

Resveratrol: Resveratrol was dissolved in DMSO (16 mg/ml) and water (1:1). Then, it was administered to PD induced animals of different treatment groups in two separate doses; low dose (2.5 mg/Kg) and high dose (10 mg/Kg) 13.

Grouping of Animals: Six animals were kept in each group (9 groups) and the different treatment groups used are as follows;

Treatment Period: The animals in the different groups (1-9) were given treatment with the study drugs for 21 days. Behavioral analysis was checked post induction on days 0, 7, 14 and 21 of the drug treatment.

Behavioral Analysis: The behavioral analysis was done to evaluate the efficacy of drug combination compared to individual drug treatments and the current gold standard in neurodegeneration associated with PD, by estimating the parameters like learning and memory, anxiety level and muscle grip strength.

Learning and Memory (Radial arm Maze) Learning and memory is a parameter used to measure the changes in cognitive effects or memory status in animals due to the effect of study drugs. It is estimated with the help of an apparatus called Radial arm Maze 15.

Apparatus: The radial arm maze consisted of eight arms which are of equal length (approx 4 feet long) and placed at a gap of equal distance, and all arms radiating from a circular central platform. The end of each arm consists of a food site, the contents of which are invisible for the animal from the central platform.

Trial: For the first three days consecutively the animals were placed on the central platform for 15 min per day and allowed to explore the maze. The bait or food was reduced to four arms on the third day of habituation, and the session was ended when the animal finished visiting all arms. The animals were trained for further eight days following habituation. The trial continued until the animal had visited all eight arms or completion of 10 min time interval.

Test: The animals were on food restriction overnight. During the test when the animal happened to insert only its head into an incorrect opening and stayed there for more than a minute, it was replaced at the center of the maze. Animals that were repeatedly choosing an adjacent arm or an arm that was only three arms away from the currently visited one were excluded from the current experiment because those animals were considered not to have acquired spatial memory. Ten minutes were allotted to each animal for task completion.

Parameter: Behavioral performances were estimated by analyzing the total time taken for task completion by each animal in the radial arm maze. An arm was considered to be visited by the rat if it enters the arm by at least half of the body. The animal was considered to leave the arm if it keeps four paws in the central platform.

Score: Decreased time for task completion = Improvement in learning and memory and better improvement in cognition.

Apparatus: The elevated plus maze is a plus-shaped apparatus with two open (50 cm ´ 12 cm) and two enclosed arms surrounded by 50 cm high walls of the same dimension, in which the similar arms are opposite to each other. The middle segment is a square with dimension (12´12 cm), which allows transit for the animal from arm to arm. The maze was elevated 50cm from the ground. The lighting conditions were kept identical for each trial. It is based on the general avoidance of animals to open spaces due to anxiety.

Trial: The trials were carried out under low light conditions. The animal was gently placed at the center of the maze facing the same open arm every time. The trials lasted for 5 min allowing sufficient time for each animal to explore the elevated plus maze. The maze was cleaned thoroughly with ethanol 30% between each animal trial and dried afterward.

Test: The animals in the different treatment groups were tested for anxiety behavior in the elevated plus maze on days 0, 7, 14 and 21 of the drug treatment. Entries were counted when the animal had crossed all the four paws into one of the arms.

Parameter: The average time spends in open and closed arms were noted for all the treatment groups with the help of a suitable device.

Apparatus: The Rota rod is a horizontally oriented rotating rod with a diameter of 7 cm, and it can rotate at varying speeds. It is low enough not to injure the animal, but high enough to induce fall avoidance in the rat. Rats normally try to stay on the rotating rod and avoid falling from the rod to the ground. The speed of a Rota rod can be adjusted.

Trial: All the animals were exposed to a prior training session to get acclimatized to the Rotarod by undergoing a 5 days training program before they attain a stable performance in the rotating rod. The speed of the rotating rod was 15rpm on the first day of training and gradually reached 20rpm at the end of the training period.

Test: The animal was placed on the Rotarod and average retention time for each rat in the rotating rod was evaluated. The cut off time was 180 sec, and each animal performed three separate trials with a 5 min gap between each other. The average time the animal falls from the rotating rod was noted and expressed as seconds per 3 min.

Parameter: The length of the time that a particular animal stays on the rotating rod will be measured, and it correlates with the balance, physical coordination and motor planning of the animal.

Effect of Drug Combinations for Learning and Memory on Radial Arm Maze in Rotenone Induced PD Rat Model: The effect of different treatments in rotenone-induced PD animals when tested with radial arm maze for evaluating the time taken for task completion is shown Fig. 2. The data reveals that the pre-trained rotenone control group showed a significant (p<0.001) increase in the total time taken for task completion when compared to the sham control group. The drug combination groups; low dose (dasatinib 5 mg/kg + resveratrol 2.5 mg/kg) and high dose (dasatinib 12.5 mg/kg + resveratrol 10 mg/kg) have shown significant (p< 0.001) decrease in the total time taken for task completion on days 7, 14 and 21 of the drug treatment, when compared to the rotenone control group. 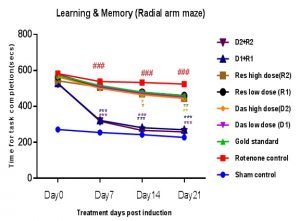 DISCUSSION: Dysregulated a-synuclein protein dysfunction and accumulation, mitochondrial dysfunction and neuroinflammation are considered as the main factors responsible for neurodegeneration in PD that contribute to long term complications like cognitive and motor dysfunction 18, 19. Research suggested that cognitive dysfunction such as learning and memory is a major long term complication in PD that involves brain areas like substantia nigra, prefrontal cortex, hippocampus and amygdala 20. The present study demonstrated that the drug combination was found to be effective in improving cognition as indicated by the improvement in the level of learning and memory. Anxiety is regarded as a common nonmotor psychiatric complication in PD that leads to a decline in the quality of life, increased level of care dependency and distress for the caregiver 21.

Further, the dysfunction in dopaminergic transmission system seems to cause anxiety 22. The drug combination is effective in reducing the anxiety level based on the scores from the elevated plus maze experiment.

Dysfunction of motor coordination is one of the most important reasons for motor difficulties affecting PD, which can affect almost all activities of daily life 23. In PD, degeneration of dopamine neurons in the substantia nigra, striatum, cortex, and thalamus account for motor dysfunction 24. The current study has revealed that the drug combination was found to be effective in improving muscle coordination as indicated by the scores for muscle grip strength obtained from the rota rod experiment.

CONCLUSION: Since, PD is a progressive neurological disorder of multiple etiologies, using a combination of two drugs that target multiple etiologies of PD rather than alleviating only the symptoms could be a crucial approach for treating neurodegeneration. Instead of dopamine replacement therapy or maintaining the balance between dopamine and acetylcholine, the current treatment option of PD, our study demonstrates that dasatinib and resveratrol in minimal dose combination can be an ideal candidate for treating long term complications of neurodegeneration such as cognitive and motor dysfunction. Further, it is our prime hope that our drug combination can be a permanent solution for the long term complications due to side effects of levodopa. However, better neuroprotection could only be possible, should the drugs be given during the early stages of disease with the help of advanced diagnostic techniques and biomarkers.