ABSTRACT: The methanolic extract (MeOH) of the bark of Holoptelea integrifolia (Roxb.) Planch and its partitions namely n-hexane (Hx), ethyl acetate (EtOAC), butanol (BuOH) and water (H2O) was screened for various in vitro biological activities including general cytotoxicity (brine shrimp lethality assay), phytotoxicity (lemna minor bioassay), nematicidal and insecticidal (Tribolium castaneum H., Rhyzopertha dominica F. and Callosobruchus analis F. assays. The extracts were found to have potent significant nematicidal activity against Meloidogyne incognita and moderate insecticidal activity against C. analis F. At the tested concentrations non-significant cytotoxicity and phytotoxicity had intended us for the utilization of extracts as biological control for the agro-ecosystem management having prudent, effectual and eco-friendly assets.

INTRODUCTION: Pests are dilemma for mankind for a myriad of reasons, for instance decreased crop yield, reduced crop quality, and increased harvesting costs1. The annual harvest economic loss from pests and others factors are estimated to be 10-40% of worldwide production 2. At the present times food scarcity is the critical issue due to continuous increasing pressure of expanding human population; in such conditions the massive annual loss of cultivated and stored agriculture products by pests generates most terrible circumstances.

Pest eradication through synthetic chemical pesticides is an important facet to overcome this prerequisite. On the contrary the ecotoxicological effects of conventional synthetic pesticides embrace the environmental pollution 3, human health and non-target organisms, by direct toxicity to beneficial insects, fishes and humans 4, development of resistant strains 5 and residue in food grains 6.

These consequences of synthetic pesticides on health and environment have urged the hunt for alternative control measures for pests 2. Many scientists 7, 8, 9 had explored flora and encountered the noxious effects of plant extracts or pure compounds (lead structure from nature) on pests can be evidenced in numerous manners, as repellent, toxic and lethal effects on stored grain pests 2.

Pakistan has a wide range of agro-climatic zones where all kinds of crops, fruits, vegetable and medicinal herbs are growing and the country’s economy is majorly dependent on the agricultural growth. The agricultural research and development in Pakistan has been focus on major crops and very little on integral part of rural ecosystem that are medicinal herbs. As medicinal herbs are not only conserving soil and water from the ecosystem but they can also provides habitat for other species, cost effective therapeutic and parasitic potentials with minimal adverse consequences 10.

The exploration and utilization of herbal medicines is safe enough and efficacious, even if the desirable therapeutic response is not achieved, due to the combination of phyto ingredients in concert with vitamins and minerals from natural origin. The agriculture growth has been greatly declined with serious economic consequences due to the attack of various types of pests in the cultivated and post harvested stages of crops. Some common stored grain pests are Tribolium castaneum H., Rhyzopertha dominica F. and Callosobruchus analis F.11 while parasitic nematodes provoke morphological and physiological changes within roots and attack nearly world’s 40 major crops 12.

The root knot nematode of Meloidogyne incognita 13is the most abundant and destructive nematode in Pakistan infecting about 102 plant species 14. This study was undertaken on roadside ornamental plant Holoptelea integrifolia (Roxb) Planch cultivated in Pakistan for the biological screening and evaluations of plant bark extracts for any beneficial effect(s) of medicinal and agriculture importance.

Extraction: The fresh bark of H. integrifolia (Roxb.) Planch were cleaned and weighed (10kg) properly, chopped into small pieces. Bark had been percolated in absolute methanol (Merck, Germany) at room temperature and evaporated under reduced pressure on the rotary evaporator (Eyela, Japan) followed by lyophillization (Eyela, Japan) to powder form.

The lyophilized methanolic extract (MeOH) and its partitions were used for screening of its impact on integrated pest management.

The concentrations of 10, 100 and 1000μg/ml of the samples, 5 ml of sea water and ten shrimps per vial were incubated at 26±1oC for 24 h. The assay of each sample was performed in triplicates. The numbers of shrimps that survived were counted after 24 hours. The negative control of the protocol was served as solvent while the reference cytotoxic drug, Etoposide (LD50 = 7.465μg/ml) was used as positive controls respectively. The data were analyzed with a Finney computer program 16 to determine LD50 values with 95% confidence interval.

Phytotoxicity Bioassay: This assay can quickly determine the phytotoxic bioassay that evaluates the test materials for frond proliferation in duckweed (inhibition and promotion of Lemna minor). Lemna minor Linn.breed and collected by standard protocol from the esteemed premises of University of Karachi, Karachi, Pakistan. The Lemna bioassay was carried out by the modified protocol of Mclaughlin 17.The fronds was first washed with water and then inorganic sterilized E-Medium (mixture of various constituents in distilled water having pH 5.5 to 6.0 adjusted by adding KOH pellets) prior to use.

The extracts dose of 10, 100 and 1000µg/ml has been inoculated in three flasks (Allowing the solvent to evaporate overnight). On the next day 20 fronds in each flask along with 20 ml of E. medium had been kept in Fisons Fi-Totron 600 H growth cabinet, 9000 lux intensity, 56±10 relative humidity and 12 h day length for 7 days at 27-29oC while examination had conducted daily during incubation.

In the end numbers of fronds per doses were counted on day 7 to determine growth inhibition or proliferation of fronds in the flasks. Standard herbicide ‘Paraquat’ was used in this study, which have the level of toxicity (0.015mg/ml) against duckweed.

Insecticidal Activity: Holoptelea integrifolia (Roxb.) Planch extracts were exposed to the insects of common grain pest Tribolium castaneum, Rhyzopertha dominica and Callosobruchus analis by direct contact toxicity method using filter paper 18. The insects culture used are incubated at 30±1oC, 12:12 hrs dark/light photoperiod and 65% relative humidity, which have been reported as an optimum for rapid growth. In this experiment each insect species were reared on the recommended diet protocol 20 and this diet has been substituted by a fresh one after every three days to evade habituation by the larvae 19.

All these insects of uniform age and size were utilized and kept them without food for 24 h afterward mortality count had done. The test samples i.e. 20 mg and 40 mg (test samples dissolved in volatile solvent) were loaded on the filter paper of petri plate (9 cm or 90 mm). After 24 hours, 10 insects of each species were placed in each plate and incubated the plates at 27 °C for 24 hours with 50% relative humidity in growth chamber. The volatile solvent was treated as negative control for the determination of solvent effect along with conventional insecticides i.e. Permethrin (239.5 µg/cm2) was used as standards.

Nematicidal Activity: The in vitro nematicidal activity was performed by Meloidogyne incognita against crude extract and partitions of H. integrifolia (Roxb.) Planch. The root knot cultures of Meloidogyne incognita was inoculated on the respective host under maintained net house conditions which was obtained from NNRC (National Nematological Research Center), University of Karachi, Karachi, Pakistan. The concentrations of 1, 0.5, 0.25 and 0.125 mg/ml have been subjected with 100 freshly hatched second stage juveniles, for the evaluation of nematicidal activity whereas the experiment was conducted both in light and dark conditions 21. The concentrations were prepared in distilled water while the stock solution has been prepared in 5% DMSO, so as the control 5% aq. DMSO and conventional nematocide furadan was taken for standard comparison.

The percent of mortality was evaluated timely up to 48 hours under stereoscopic binocular microscope. Mortality of nematodes was confirmed by their inactive even by touching them with the needle. The treatment was replicated thrice for the determination of average percentage of mortality.

RESULT AND DISCUSSION: The agriculture countries are largely depended on the use of conventional synthetic pesticides to protect their harvest from pests. But the consequences of the utilization of synthetic pesticides embrace the development of species resistant, toxic residues on yields, health hazards to farmers, high persistence and eco-toxicology 5, 22.

Moreover these synthetic chemicals are expensive and not accessible to poor rural farmers. These contributing factors provoke interest in the re-exploration of alternative traditional sources that are locally available inexpensive, biodegradable, eco-friendly and non-interfering in the normal growth of plants and human cells. Higher plants are rich resources of novel natural substances, in the establishment of favorable ecological protocol for insect management 23. The medicinal and pesticidal plants have intense correlation 24. In this concern, the present study is conducted to explore safe and cost effective botanical pest controlling agents.

H. integrifolia (Roxb.) Planch crude methanolic extract(MeOH) and its partitions namely n-hexane (Hx), ethyl acetate (EtOAc), butanol (BuOH) and water (H2O) were illustrated by the results about their safe or non significant in the cytotoxic bioassay except Hx extract that had no. of shrimp survivors 50% and LD50 846.705μg/ml at 1000 µg/ml (Figure 1).

The phytoxicity bioassay of all the extracts has been exhibited no bioactivity at three different concentrations except BuOH extract only which showed 21% and 31% growth regulation at 100 and 1000 µg/ml concentrations (Figure 2). 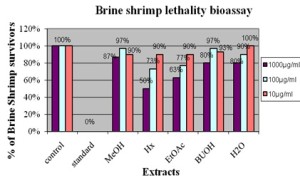 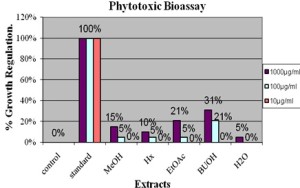 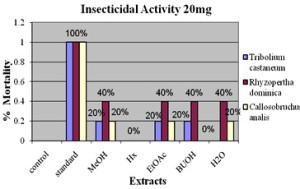 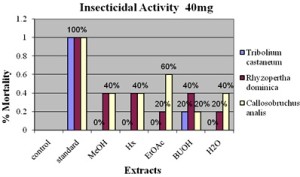 The MeOH and BuOH extracts in both light and dark were found more potent nematocides which gave 100% mortality of Meloidogyne incognita at all four concentrations (1, 0.5, 0.25 and 0.125) after 2 hours while other extracts activity is relatively similar to the conventional nematocide furadan and indicates the potential source of botanical nematocidal compound (Table 1-2).

The results of brine shrimps bioassays depicted the safe and high threshold therapeutic index which will helpful for better utilization in determining pharmacological activities against various diseases. The pesticidal residues due to their non selective toxicity are not only health hazardous but also interferers in the growth metabolism of plants by affecting the balance between the pests and natural predators, this goes in favor of pests (which develops resistance quicker). In such case this plant having no significant phytoxicity along with significant pesticidal activity are considered to be safe, effective and eco-friendly.

On H. integrifolia (Roxb.) Planch, this is the first ever study on this important aspect, as further investigations should be continued to sort out the bioactive agents and novel derivatives, to endorse the relevance of conventional plants as pesticide to conserve the ecosystem.