ABSTRACT: 1,2,3-Benzotriazole (BTA) is a heterocyclic compound with three nitrogen atoms. The enormous investigations on derivatives of benzotriazole reveals wide applicability of this molecules for tagging and delivering huge number of heterocyclic nuclei. This molecule has been used for the analytical determination of silver as well as a restrainer in photographic emulsions. The effectiveness of 1,2,3-Benzotriazole (BTA) as drug precursors have been drawing attention for a long period. The derivatives of benzotriazole act as agonists for many biologically active proteins. For instance, corozole and alizapride have the inhibitory properties against different proteins and Benzotriazole esters have been reported to work as mechanism-based inactivators for severe acute respiratory syndrome (SARS) 3CL protease. The various derivatives synthesized by different research workers showed antimicrobial activities such as antibacterial, antifungal, antiviral, anthelmintics, antiprotozoal and antimycobacterial activity. The present article throws light on the different derivatives of benzotriazole and their related biological activity, and is reported chronologically. The chronologic development in the synthesis of its derivatives and related changes in therapeutic activity opens new channels for the researchers to work on benzotriazole molecules to develop some highly effective lead molecules.

INTRODUCTION: As the micro-organisms are rapidly undergoing genetic changes and developing resistance against many antibiotics and therapeutic agents for various diseases more quickly than new drugs are being made available so the war against the infectious diseases has become a never ending process. Over the past few decades, there are great interest of triazole class arising due to their wide use in industry and agriculture. Benzotriazole and its derivatives have great significance in medicinal chemistry.

Benzotriazoles are often used as corrosion inhibitors, radioprotectors, and photo stabilizer in the production of plastic, rubber and chemical fiber 3. Along with these activities, benzotriazole is also important as a precursor in the synthesis of peptides, acid azides, preparation of 3-hydroxymethyl-2,3-dihydrobenzofurans and 3-hydroxymethylbenzofurans 2.

Benzotriazole have three tautomers, namely two 1H-forms and one 2H-form. In solution, the equilibrium lie almost entirely on the side of the 1H-forms 4. Benzotriazole is an extremely weak base, but with a pKa = 8.2, it is a stronger NH-acid than indazole, benzimidazole or 1,2,3-triazole 5.

Synthesis: Benzotriazoles are synthesized by cyclocondensation of o-phenylenediamines with sodium nitrite in acetic acid (Fig. 1). The reaction involved the simple heating the reagents together. Conversion of the diamine into the mono-diazonium derivative is followed by spontaneous cyclization 6. 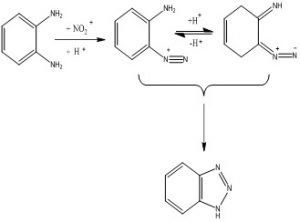 FIG. 1: SCHEME FOR SYNTHESIS OF BENZOTRIAZOLE 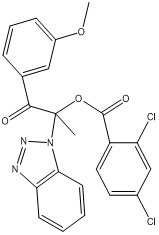 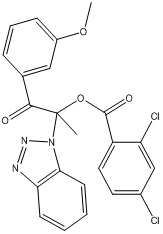 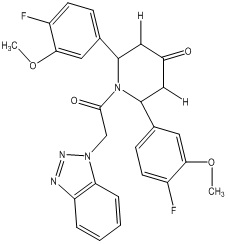 Antifungal activity: Substituted 1,2,3-benzotriazole derivatives (7a-7e) are synthesized from benzimidazoles with 1-chloromethyl benzotriazoles and evaluated for their antifungal activity against P. oryzae, B. cinerea, A. niger, C. albicans and T. rubrum at 1000 ppm, 500 ppm and 100 ppm concentrations by solidified agar method. Compound 7b and 7e (Fig. 8) showed excellent antifungal activity. The inhibitory activity was compared with griseofulvin (standard drug) 12. 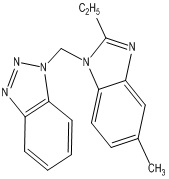 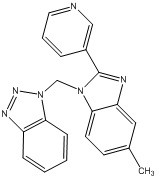 Substituted benzotriazole derivatives containing pyrazolidinedione moiety (8a‐8i) were synthesized and their antifungal activity was tested against A. niger and C. albicans by cup plate diffusion method by measuring the zone of inhibition in mm. Compounds 8e, 8h and 8i (Fig. 9) were found to have good activity against A. niger while compound 8c was found to have good activity against C. albicans. Ketoconazole and Clotrimazole were used as a standard for screening 1. 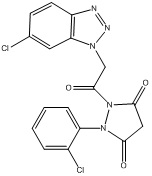 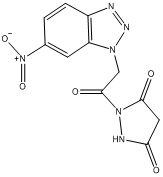 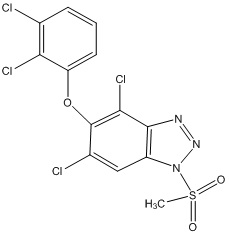 A series of 5(6)-(1N)-substituted benzotriazole derivatives (12a-12f) were synthesized using a crystalline oxirane intermediate. All the compounds were evaluated for inhibitory activity against various species of Candida and Aspergillus. Compounds 12b (Fig. 13), 12c, 12d and 12e exhibited potent antifungal activity, with the MICs for Candida spp. and Aspergillus niger, ranging from1.6 μg/mL to 25 μg/mL and 12.5 μg/mL to 25 μg/mL, respectively 15. 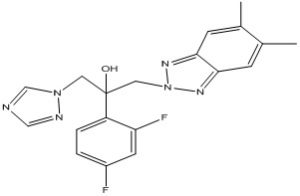 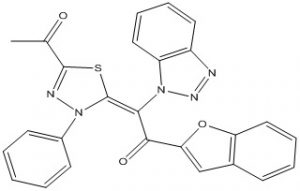 5-Arylidene-2- aryl - 3- (benzotriazoloacetamidyl)-1,3-thiazolidin-4-ones derivatives (16a-16j) were synthesized from ethyl acetoacetate and evaluated the analgesic activity by eddy and leimbach method. Compound 16h, 16i (Fig. 17) and 16j were found to be better analgesic activity. Acetylsalicylic acid was employed as a reference drug 18. 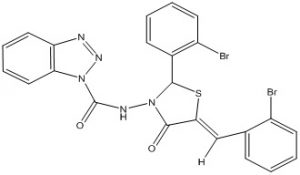 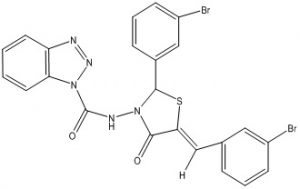 Antiviral activity: A novel series of dialkylamino side chain derivatives of benzotriazole were synthesized and reported as potential inhibitors of respiratory syncytial virus. Compound 17 (Fig. 18) was found to be most potent in series 19. 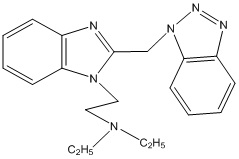 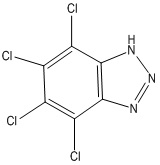 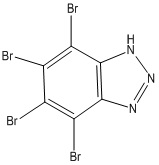 Anticonvulsant activity: A series of benzotriazole containing 1,3,4-thiadiazole derivatives (19a-19f) were synthesized and evaluated for anticonvulsant activity in maximal electroshock seizure(MES) and subcutaneous metrazole (ScMet) test. Compounds 19a and 19d were found to be active in ScMet only, whereas the test compounds 19c (Fig. 20) was active in MES. Activity of compound 19c was similar to the second reference drug phenytoin. Valproic acid was used as a first reference drug 17. 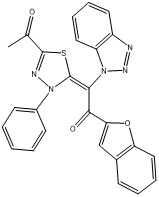 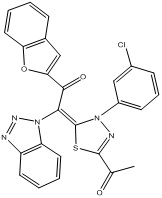 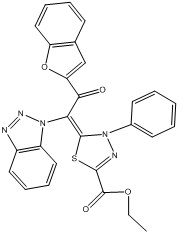 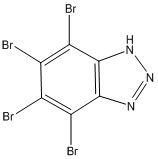 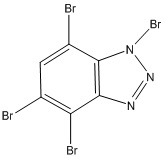 Benzotriazole-substituted benzoate derivative (compound 21a) (Fig. 22) was synthesized and evaluated for its anti-proliferative activity against several cancer cell lines. It could effectively inhibit the proliferation of human hepatocarcinoma BEL-7402 cell with low IC50 value of 0.082 mg/mL 22. 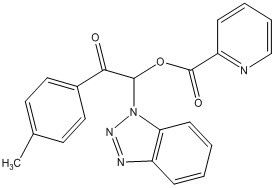 Anti-mycobacterial activity: Development of anti-tubercular agents is very tedious process therefore only one or two new drugs will arrive in the market from these efforts. The treatment of tuberculosis with combination of drugs has even not satisfactory in combating the disease due to bacterial resistance. There is need for effective anti-tubercular agents to win the battle against this millenary scourge 23, new class of benzotriazole derivatives triazoloquinolones were active against multidrug resistant M. tuberculosis (MDR-Mtb) was reported by Carta Antonio et al., 2011.

Anti-protozoal activity: The 5, 6-dimethyl and 5,6-dibromo derivatives of Benzotriazole were reported active against Acanthamoebacastellani by Katarzyna K et al., in 2004.

The antimicrobial activity of Benzotriazole derivatives with reference and main investigator is arranged in chronological order in Table 1.

FUNDING SOURCE: This research did not receive any specific grant from funding agencies in the public, commercial, or not-for-profit sectors.