ABSTRACT: Berberine hydrochloride is an isoquinoline alkaloid isolated in the form of Berberine hydrochloride from the roots and stems of Berberis vulgaris, B. aristata, Coptidis rhizoma and other plant species. Berberine is well known for its antiproliferative and anti inflammatory activity since long time. The present study is carried out to study mechanism of inducing apoptosis by berberine hydrochloride on HEPG2 liver cancer cell line. MTT assay used to study cytotoxicity against HEPG2 cells and COX2, PGE2 and western blot were used to study its apoptotic pathway. PGE2 has been implicated in COX-2-mediated effects; we determined the levels of PGE2 in the berberine-treated cells. Our results revealed that treatment with berberine hydrochloride for 24 h resulted in significant inhibition of PGE2 production in a dose-dependent manner 21-75%, P, 0.01-0.001, suggesting that berberine induced reduction in PGE2 production is associated with an inhibitory effect of the berberine on COX-2 in these cells. Berberine has shown PPAR Gamma activation and COX2 inhibition via PGE2 regulation and caused apoptosis by down regulating anti-apoptotic protein bcl-2 and upregulating bax and bak proteins. From the studies it is concluded that berberine hydrochloride can be a potential chemotherapeutic agent to treat Hepatocellular carcinoma.

INTRODUCTION: Berberine is an isoquinoline alkaloid isolated in the form of Berberine hydrochloride from the roots and stems of Berberis vulgaris, B. aristata, Coptidis rhizoma and other plant species.

It has diverse pharmacological actions like antidiabetic, antilipid peroxidation, neuro-protective, anti-inflammatory, and antibacterial, antifungal and has been used as a remedy for different diseases for thousands of years in India and China traditional medicines 7.

Hepatocellular carcinoma major form of liver cancer is the most prevalent human malignancies in the world. Treatment for liver cancer remains elusive and primary approach to treat is chemotherapy 4. Chemotherapeutic agents induce apoptosis and cause cell death.

Antiproliferative activity of Berberine has dragged the attention of many researchers to study its mechanism of action 6. Berberine has shown antineoplastic properties by induction of apoptosis and cell cycle arrest via multiple pathways 8. directly with nucleic acids and with several proteins, including telomerase, DNA topoisomerase I, p53, NF-kB, MMPs, growth factor receptors and estrogen receptors 5, 7. Berberine induced cell cycle arrest at the G2/M phase in colorectal, breast cancer and hepatocellular carcinoma cells followed by apoptosis activation through reactive oxygen species generation the loss of mitochondrial membrane potential, release of cytochrome c, inhibition of anti-apoptotic proteins (c-IAP1, Bcl-2, Bcl-xL), activation of pro-apoptotic proteins (p53, p21, caspase-3 and -9) and cleavage of PARP-1. 11

Cyclooxygenase is the enzyme that responsible for inflammation. COX-1 is constitutively expressed and has an important role in cell homeostasis, while COX-2 1, 2, 3 is an inducible enzyme activated by extracellular stimuli. Over expression of COX-2 stimulates the production of prostaglandins, including prostaglandins E2 (PGE2), which are implicated in inflammatory responses and also in carcinogenesis and metastasis. Berberine has shown to lower COX-2 expression in many human cancer cell line studies.

MTT Cell Viability Assay: The MTT method was designed to determine the viability of cells by metabolic activity. Yellow water soluble MTT is metabolically reduced in viable cells to a blue-violet insoluble formazan crystals. The number of viable cells correlates to the colour intensity determined by photometric measurements after dissolving the formazan in DMSO 19.

The HEP-G2 cell lines were purchased from National Center for Cell Sciences, Pune. The cell lines were chosen as they have a significant history of use in the anticancer activity assays.

Preparation of MTT Solution: Stock concentration of 5 mg/ml MTT was prepared in PBS and sterile filtered with 0.22 µ filter and was used for the study.

Stock concentration of berberine chloride was prepared by dissolving the test item in 100% DMSO.

From the final stock different concentrations of the final working stocks five concentrations were prepared in DMEM medium by 4 folds and 3 folds serial dilutions as specified in Table 2. Diluted stocks were used for the study.

Cell Seeding for Cytotoxicity Assessment: Cell monolayer was rinsed with PBS, aspirated off PBS and cells were trypsinized with 0.25% Trypsin with 0.2g/l EDTA in tissue culture flask at 37 ± 1 °C until the cells detached and floated. DMEM with 10% FBS was added into the flask to flush out the cells and centrifuged at 900 rpm for 5 min. Cells were resuspended in DMEM medium and cell suspension was subjected for the cell count and viability to determine cell number per ml. Cell number was adjusted to 2 × 105 cells/ml and 0.1 ml of the adjusted cells were seeded in each well of 96 well cell culture plates. Frequent mixing was done during the seeding, to achieve a uniform cell suspension for plating the cells per well. Plates were designated to indicate its contents and date of experiment. Plates were incubated at 37 ± 1 °C for 24 ± 1 h in gaseous environment of 5% ± 1% carbon dioxide.

Data Analysis: A decrease in the number of living cells results in a decrease in the metabolic activity in the sample. This decrease directly correlates to the amount of formazan formed as monitored by optical density at 570 nm. Percent Viability will be calculated using the below formula and shown Table 3 and 4.

In-vitro COX Inhibition Assay: The ability of Berberine to inhibit ovine COX-1 and COX-2 was determined using an enzyme immunoassay (EIA) kit (catalog no. 560101; Cayman Chemical Co., Ann Arbor, MI, USA). COX catalyzes the first step in the biosynthesis of AA to PGH2. PGF2α, produced from PGH2 by reduction with stannous chloride, was measured by EIA (ACE™ competitive EIA, Cayman Chemical, Ann Arbor, MI, USA). Briefly, to a series of supplied reaction buffer solutions [960 μL 0.1 M Tris-HCl (pH 8.0) containing 5 mM EDTA and 2 mM phenol] with either COX-1 or COX-2 (10 μL) enzyme in the presence of heme (10 μL), 10 μL of various concentrations of test drug solutions (1, 10, or 100μM in a final volume of 1 μL) were added. These solutions were incubated for 5 min at 37 °C and subsequently 10 μL AA solutions (100 μL) was added. The COX reaction was stopped by the addition of 50 μL 1 M HCl after 2 min. Then 100μL of stannous chloride was added to produce PGF2α, which was measured by EIA. This assay is based on the competition between PGs and a PG- acetylcholinesterase conjugate (PG tracer) for a limited amount of PG antiserum.

The amount of PG tracer that is able to bind to the PG antiserum is inversely proportional to the concentration of PGs in the wells since the concentration of the PG tracer is held at a constant while the concentration of PGs varies. The specific antiserum-PG complex bound to a mouse anti-rabbit IgG that had been previously attached to the well. The plate was washed to remove any unbound reagents and 200 μL Ellman’s reagents, which contain the substrate to acetylcholine esterase, were added to the well. The product of this enzymatic reaction generates a distinct yellow color that absorbs at 406 nm. The intensity of this color, determined by spectrophotometry, is proportional to the amount of PG tracer bound to the well, which is inversely proportional to the amount of PGs present in the well during the incubation. Percent inhibition was calculated by the comparison of the compounds treated to the various control incubations Table 5.

Measurement of PGE2: HepG2 cells were plated at a density of 2.5 × 105/ml cells in a 24-well plate with 1 ml of culture medium per well and cultured overnight. The cells were pre-incubated for 2 h with various doses of Berberine and stimulated for 24 h with 100 ng/ml LPS. The cell culture supernatants were collected immediately following treatment and centrifuged at 1,000 × g for 15 min to remove the particulate matter. PGE2 was determined using an enzyme immunoassay (EIA) kit (catalog no. ADI-900-001, Enzo Life Sciences, Switzerland). The medium and PGE2 EIA conjugate was added to a 96-well plate pre-coated with goat anti-mouse IgG and left to react for 2 h, followed by a final wash to remove any unbound antibody-enzyme reagent. A substrate solution was added and the intensity of the color produced was measured at 405 nm (correction wavelength set at 570-590 nm).

Principle: Prostaglandin E2 (PGE2) is a primary product of arachidonic metabolism and is synthesized via the Cyclooxygenases (COX) and prostaglandin synthase pathways. PGE2 production is a commonly used method for the detection of COX-1 and COX-2 modulation and prostaglandin synthases. The HTRF® PGE2 assay is a highly sensitive method for quantifying PGE2 either in cell supernatants or directly in the presence of whole cells. Our reagents have simplified protocols requiring only two reagent additions. These protocols are easily miniaturized and amenable to automation and HTS.

SDS PAGE: Tris-HCl 42 mM, 10% glycerol, 2.3% SDS, 5% 2-mercaptoethanol and 0.002% bromo-phenol blue loading buffer was then added to each lysate, which was subsequently boiled for 3 min and then electrophoresed on a SDS-polyacrylamide gel. Proteins were transferred to nitrocellulose and incubated sequentially with antibodies and then with peroxidase-conjugated secondary antibodies in the second reaction. Detection was performed with enhanced chemiluminescence reagent. The results on Western blot analysis shown in Fig. 1 represented the average of three individual experiments. 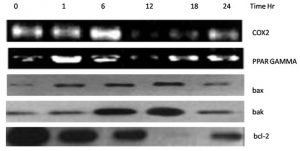 RESULTS: Metabolic activity can be evaluated by measuring the activity of a mitochondrial enzyme succinate dehydrogenase using MTT test. MTT is designed for the quantification of cytotoxic index in cell population using 96 well plate format. This test is widely used in the in-vitro evaluation of the cytotoxic potency of drugs. In the present study we applied the MTT test to evaluate the potency of berberine hydrochloride on HEPG2 cancer cell lines in an in vitro cell-based assay. Berberine was found to have inhibitory activity of 85% at concentration of 0.5 mg/ml and EC50 value of 0.214 mg/ml.

We determined the levels of COX-2 in lysates of cells from the various treatment groups using western blot analysis. As shown in Fig. 1 and Table 5, treatment of HEPG2 cells with berberine hydrochloride reduced the levels of COX-2 expression in a concentration-dependent manner as compared with the expression in untreated controls and increased PPAR Gamma levels. As the COX-2 metabolite, PGE2 has been implicated in COX-2-mediated effects; we determined the levels of PGE2 in the berberine-treated cells. Our results revealed that treatment with berberine hydro-chloride for 24 h resulted in significant inhibition of PGE2 production in a dose-dependent manner Graph 2 21 - 75%, P, 0.01-0.001, suggesting that berberine induced reduction in PGE2 production is associated with an inhibitory effect of the berberine on COX-2 in these cells.

From the studies it is concluded that berberine hydrochloride can be a potential chemotherapeutic agent to treat hepatocellular carcinoma.

ACKNOWLEDGEMENT: Thanks for Vimta Laboratories Hyderabad for providing us facility to test.