Serum albumins are the most abundant proteins in plasma with many physiological functions. Among them, BSA has a wide range of functions involving the binding, transport and delivery of fatty acids, porphyrins, bilirubin, steroids, etc and it is home to specific binding sites for metals, pharmaceuticals and dyes. Recently, nanotechnology has become a popular term in the current science and technology. Nanotechnology has been introduced for the food and drug industry, including encapsulations and delivery systems. BSA nanoparticles were prepared and their binding efficacy with the available analgesics such as acetanilide and its derivatives were studied. The value of apparent rate constant Kapp from the interaction between acetanilide and BSA by UV visible spectroscopic and fluorescence technique was found to be 2.294X106. The quenching rate constant of BSA-Acetanilide was found to be 1.0345X1015M-1 S-1. There are two binding sites in BSA for acetanilide. A QSAR study was performed for the different analgesics. Inhibition of Acetanilide and its derivatives with the Cyclooxygenase (COX 1) was studied using docking mechanism. The electro chemical behavior of acetanilide is studied and it is found to be reversible.

in the current science and technology. It refers to the research at the scale of 100nm or less. Nanotechnology has been introduced for the food and drug industry, including encapsulations and delivery systems. In drug carrier systems, the particles should be small enough to penetrate through the capillary bed. Bioactive ingredients such as nutrient, phytochemicals, nutraceuticals and drug particles can be incorporated into nanoparticles to maximize delivery efficiency and desirable benefits 1. Serum albumins are the most abundant proteins found in plasma and are found to have many physiological functions such as transport, delivery of fatty acids, porphyrins, bilirubin, etc and it has specific binding sites for metals, drugs and dyes 2.

Analgesics are the drugs which relieve pain by acting on the central nervous system and they reduce pain without loss of consciousness. Analgesics can be divided into two main groups namely: Narcotic analgesics and Non- narcotic analgesics 5. Many important properties of molecules are dependent on the microscopic properties from which the molecules are built up. The complex relationship between the molecules and their properties occur in their physicochemical and biomolecular properties as well as in material behavior, in biochemical methods such as molecular docking and analogues design 6, 7. Quantitative Structure Activity Relationship (QSAR) is a method which correlates molecular structure to its in vitro or in vivo biological properties. Computational virtual screening approaches assess the interaction of the small molecules with the macromolecular target in silico 8.

The present work is focused on studying the binding efficacy of acetanilide with BSA and to elucidate the Quantitative Structure Activity Relationship of acetanilide. The work was also aimed to investigate the inhibitory action of acetanilide against the Cyclooxygenase protein (CoX1) based on molecular docking mechanism.

Reagents and Chemicals: The chemicals, acetanilide and cinnamic are purchased from Aldrich of high degree of purity (98%), Bovine Serum Albumin (96%). Fatty acid free product (No. A8806, Sigma) was dissolved in double distilled water to prepare stock solution of (1X10-4) which was then stored at 0-4oC. All measurements were performed at room temperature.

Fluorescence Spectroscopy: Fluorescence Spectroscopy or fluorometry is a type of electromagnetic spectroscopy which analyses fluorescence from sample using a beam of light most probably ultra violet rays. It is the technique used for structural elucidation and compound identification. These instruments record the response of samples by three parameters namely the number of bands in the spectrum, the position of the bands and intensities of the bands at all wavelength simultaneously.

UV- Visible and Fluorescence Studies: UV-VIS spectrometry is an instrumental technique that provides ideal methods for the determination of micro and semi micro quantities of analytes in a sample. The UV-VIS spectrum arises due to the transitions amongst the electronic energy levels of the absorbing species. 0.023g of BSA is dissolved in 5ml of water. The concentration is calculated by measuring the absorbance at 280nm. 3ml solution of BSA containing the concentration of 1X10-5 M was prepared from 1X10-4 M stock solution and titrated by successive additions of 30 µl stock solution of acetanilide (1X10-3 M). UV-Visible spectra of all the solutions were recorded in UV-Visible range. Fluorescence spectra were then measured at ambient temperature.

Docking Studies: Docking studies of the acetanilide derivatives with the target protein was carried out using the software Argus lab. The crystal structure of Cyclooxygenase – 1(PDBID-3N8Z) was downloaded from the Protein Data Bank (PDB). The structures of acetanilide and its derivatives were downloaded from Pubchem, a database for small organic molecules. The compounds were docked with the target at its active site. The energy values and interaction of the compounds with the target were determined and the best inhibitor compound was selected based on the energy values and interaction.

QSAR Studies: To elucidate the Quantitative Structure Activity Relationship of the acetanilide and its derivative compounds DRAGON software was used. The downloaded structures of the compounds were loaded into the software and the constitutional and molecular descriptors were calculated.

Interaction between acetanilide and BSA by UV Visible Spectroscopic and Fluorescence Technique: Table 1 shows the absorption spectrum of BSA in water and water containing acetanilide at different concentrations. In presence of the quencher the absorbance of BSA is increased markedly without change in the location of the peak (280nm). This inference is due to the reason that while adding the quencher solution to BSA solution, the BSA molecules gets absorbed on the surface of acetanilide and involved in the formation of ground state complex of the type BSA-Acetanilide. The newly formed complex also has the absorption at 280nm. This is the reason for increase in absorption of BSA with the addition of acetanilide. This result indicated that there is an interaction between acetanilide and BSA and it is existed through ground state complex formation. The value of apparent association constant Kapp was determined from the plot and it is 2.294 x 106.

TABLE 1: ABSORPTION OF BSA IN PRESENCE AND ABSENCE OF ACETANILIDE AT 280nm

TABLE 2: EFFECT OF FLUORESCENCE QUENCHING OF BSA BY ACETANILIDE

Mechanism of interaction between Acetanilide and BSA: The fluorescence of BSA may be due to the presence of amino-acid residue such as tryptophan and phenyl alanine. Hence, spectroscopic methods are usually applied to study the conformation of serum protein in synchronous fluorescence spectroscopy. Usually the amide I peak for BSA occurs in the region of 1600-1700cm-1 and amide II band near 1548cm-1. Fig. 2, shows the FT-IR spectra of BSA a sharp peak near 1630cm-1 appears while a broad peak appears near 1685cm-1. In Fig. 3, BSA in presence of acetanilide shows the amide peak at 1718cm-1. From the shift in peak position we conform that the conformation of BSA has been affected by the addition of acetanilide as supported by similar observation made earlier.

To elucidate the Quantitative Structure Activity Relationship of acetanilide and their derivatives: The quantiitative Structure Activity Relationship of the acetanilide and its derivatives were analyzed (Table 3). All the five compounds were found to obey the Lipinski’s rule of 5. From the results of QSAR, the compound found to satisfy all the necessary parameters to act as drug.

To study the inhibition efficiency of acetanilide and their derivatives against the protein Cox 1 based on docking studies: The 5 different derivatives of acetanilide were docked against the Cox protein (Table 4). Their interaction binding energy and bond distance were analyzed. The results of docking of the acetanilide derivatives with the Cox1 protein, suggested that the compound Acetaminophen has the lowest energy. It was also found to have the same interaction as that of the ligand. So Acetaminophen was found to inhibit the protein Cox1 with greater efficiency. Fig. 7 indicates the interaction of the different compounds with COX protein.

TABLE 4: ENERGY AND H-BOND INTERACTION TESTED FOR THE COX1 INHIBITION BY THE ACETANILIDE AND ITS DERIVATIVES USING DOCKING STUDIES

To investigate the electrochemical behavior of acetanilide by cyclic voltammetry studies: Fig. 4 and 5 (Cyclic Voltammogram of Acetanilide 0 to 1V) show Cyclic Voltammogram of acetanilide which clearly indicate a well defined oxidative peak a negative -0.4 V and at more the potential at +1.2 V as reported. Furthermore it does not show the reduction peak. Therefore the electrochemical process is found to be reversible. 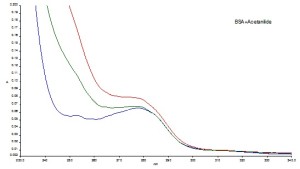 FIG. 1: ABSORPTION SPECTRUM OF BSA (1X10-6) IN PRESENCE AND ABSENCE OF ACETANILIDE 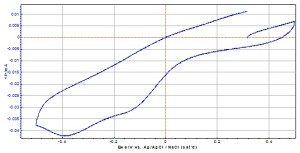 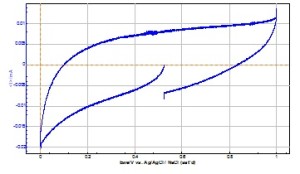 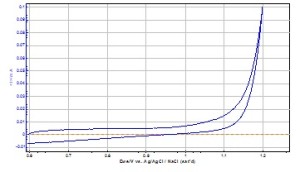 FIG. 5B: CYCLIC VOLTAMMOGRAM OF ACETANILIDE 0 to 1V 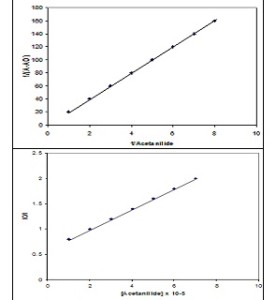 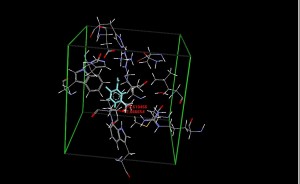