ABSTRACT: Uvaria afzelii Scott Elliot (Annonaceae) is an African traditional medicinal plant. In Ivory Coast, roots of the plant are commonly used as antiparasitic and against others ailments. During our previous investigation on the roots one 1-indanone derivative was obtained together with other compounds that showing interesting antiprotozoal activities. The aim of this study was to isolate other antiprotozoal compounds. The chloromethylenic extract of the roots was fractionated on silica and Sephadex® LH-20 gels columns chromatography. The new syncarpic acid derivative, bingervone (1), was isolated together with the known compounds, demethoxymatteucinol (2) and emorydone (3). The structures of these compounds were established by NMR, IR, UV and HRESIMS spectroscopic data. Bingervone (1) displayed weak antitrypanosomal activity against Trypanosoma brucei brucei trypomastigotes, with a LC100 value of 114.8 µM, and moderated antileishmanial activities against Leishmania donovani and L. major promastigotes, with IC50 values of 38.9 and 44.4 µM, respectively. These antileishmanial activities were in the range of reference drug used.

It was used in folk herbal medicine for the treatment of fever, bronchitis, malaria and jaundice 1–4. Previous phytochemical investigations of U. afzelii revealed the presence of C-methylated flavanones, chalcones, xanthones and miscellaneous compounds 5, 6. Analysis of the essential oils obtained from its barks and roots showed that 2,5-dimethoxy-para-cymene, bornyl acetate, α-epi-cadinol and camphene were the main volatile terpenoids. Benzyl benzoate was found in relative important amounts 7. Recently, we have reported the first 1-indanone derivative isolated from the roots of the species in addition to the two known compounds demethoxymatteucinol (2) and emoridone (3) 8. In our continuing search for biologically active metabolites from U. afzelii, the chloromethylenic extract of the roots, possessing a strong antiprotozoal activity 3, was reexamined. In this paper, we report the isolation and the structure elucidation of a new β-triketone derivative, bingervone (1), and its antiprotozoal activity. Compounds 2 and 3 were obtained as known compounds.

The 1H and 13C NMR spectra as well as 2D spectra (COSY, HSQC, HMBC and NOESY) were recorded in CDCl3 on a Bruker AC-400 spectrometer (Champs-sur-Marne, France) operating at 400 MHz for 1H and 100 MHz for 13C. EIMS spectra were recorded on an Agilent Hewlett-Packard 6890 series apparatus equipped with an Agilent HP 5973 (Issy-les-Moulineaux, France) mass-selective detector (EI mode, 70 eV). HRESIMS spectra were registered with a Bruker Esquire LC00040 spectrometer (Champs-sur-Marne, France).

Roots of Uvaria afzelii Scot Elliot were collected in Bingerville (Ivory Coast) in April 2002 and identified by Professor Aké Assi of the Botanical Department. A voucher specimen, N° 343 CNF, was deposited at the herbarium of the Centre National de Floristique, Cocody University, Abidjan, Côte d’Ivoire

All experiments were performed in triplicate, using 3 wells per condition. DMSO did not show toxicity at the maximum concentration used (0.1%).

The antileishmanial activity of the isolated compounds was tested in vitro against L. donovani (WHO designation: MHOM/ET/1967/L82) and L. major (WHO designation: MHOM/BF/00/COU12/MON74), according to a method previously described 9. Briefly, promastigotes were cultivated in HEPES (25 mM)-buffered RPMI 1640 medium enriched with 10% Fetal Calf Serum (FCS) and 50 µg/mL gentamicin at 27 °C in a dark environment. The screening was performed in flat-bottomed 96-well plastic tissue-culture plates maintained at 27 °C. Promastigotes formed from a logarithmic phase culture were suspended to yield 106cells/mL after haemocytometer counting. Each well was filled with 100 µL of the parasite suspension, and the plates were incubated at 27 °C for 1 hour before addition of the samples dissolved in DMSO. The viability of promastigotes was assessed by the tetrazolium-dye (MTT) colorimetric method. The results were expressed as the concentrations inhibiting parasite growth by 50% after a 3-day incubation period. The starting concentration for screening was 100 µg/mL for extracts or 100 µM for pure compounds. Miltefosine and sitamaquine were used as reference compounds.

Trypanocidal activity: Compounds were tested for their activity against bloodstream forms of T. brucei brucei (Glascow Veterany Research, GVR 35, kindly supplied by Pr F.W. Jennings) as described earlier 10. Briefly, the bloodstream parasites were maintained in vitro without the loss of their infectivity for 24 hours in the dark at 37 °C in a 5% CO2 atmosphere. Screening was performed in 96-well tissue-culture plate in a final volume of 200 µL containing 2 x 105 parasites/mL, in supplemented Minimum Essential Medium (Gibco, BRL) and each sample to be tested at a starting concentration of 100 µg/mL (diluted in DMSO). The minimum lethal concentration (LC100) was defined as the minimum concentration at which no motile parasites were observed microscopically. Confirmation of the LC100 was obtained by injecting naive mice intraperitoneally with 150 µL of the treated trypanosome suspension withdrawn from the well after 24 hours incubation period. The animals were aparasitemic 30 days post-infection. Pentamidine was used as reference compound.

RESULTS AND DISCUSSION: Bingervone (1) Fig.1 was isolated from the chloromethylenic extract of the roots of U. afzelii as pale yellow needles. HRESIMS showed a [M+Na]+ adduct at m/z 293.1322, corresponding to the molecular formula C14H22O5 (calcd: 293.1365). No hydroxyl functionality was observed in the IR spectrum, although absorption bands at 1741 and 1707 cm-1 suggested the presence of an aliphatic ester and a cyclic carbonyl group, respectively. The EIMS spectrum showed peaks at m/z 242 [M-28]+ and 123 [M-147]+, due to the  consecutive losses of one carbonyl and two acetate groups (Fig.2), supporting these observations.

Fig. 1: Chemical structures of compounds 1–3 and of syncarpic acid.

The structure of 1 as indicated in Fig. 1 was deduced from the correlations observed in the NOESY spectrum (Table 1). Furthermore, the downfield resonance of the oxymethine protons suggested a trans-orientation of the acetate groups (meso-cis derivatives, δ c.a. 4.74 ppm) 11–13. The absolute configuration at C-3 and C-5 were then determined as 3(R) and 5(R) by the positive value of optical activity compared to those of trans-diacetate-cyclohexanone derivatives 13. On the basis of the above data, compound 1 was established to be (3R,5R)-3,5-diacetate-2,2,6,6-tetramethylcyclohexan-1-one, and was named bingervone according to the place where the plant was harvested. Compound 1 appeared as the bis-acetylated form of syncarpic acid (Fig.1). Syncarpic acid and a number of its derivatives such as 3 were previously obtained from U. afzelii 5. To the best of our knowledge, in the Annonaceae family, these compounds have been characterized in two genera only. Indeed, syncarpic acid derivatives were reported from Desmos species 14, 15. Nevertheless, β-triketones such as syncarpic acid derivatives have been mainly described in the Myrtaceae family, with interesting biological activities 16–21.

It is noteworthy that emorydone (3), an analogue bearing a benzopyranic ring, was found in two species of the genus Psorothamnus (syn. Dalea, Fabaceae) only 22, 23. The limited occurrence of these compounds is remarkable with a distribution in taxonomically unrelated taxa. 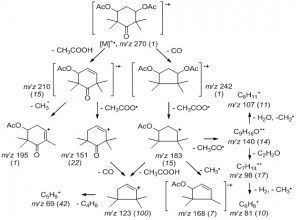 Bingervone (1), tested for its antiprotozoal properties, showed significant in vitro antileishmanial activity against promastigote forms of Leishmania donovani and L. major promastigotes with IC50 (Inhibitory Concentrations 50%) values of 38.9 ± 4.1 and 44.4 ± 3.9 µM, respectively. The antileishmanial activities of 1 were about 6 times weaker than those of miltefosine, the reference drug (IC50 = 7.1 µM and 8.4 µM, respectively). However, such activities were in the range of those of sitamaquine, also used as a control (IC50 = 35.4 µM), which was in the development process for the treatment of visceral leishmaniasis. The trypanocidal activity against Trypanosoma brucei brucei trypomastigotes was weak, with a LC100 (Lethal Concentration 100%) of 114.8 µM (pentamidine: IC50 = 12.5 µM). The antiprotozoal activities of 2 and 3 have been described earlier 8, 24.

CONCLUSION: Investigation of the chloromethylenic extract of the roots of Uvaria afzelii has led to the isolation of two β-triketone derivatives, bingervone (1) and emorydone (3). β-Triketone derivatives were found to have limited occurrence in plant kingdom. The third compound, demethoxymatteucinol (2), was a C-methylated flavanone previously obtained from U. afzelii. Their structures were determined thanks by NMR, UV, IR and HRESIMS spectroscopic data. The unusual β-triketone derivative, bingervone, showed antiprotozoal activities on Leishmania donovani and L. major similar to those of sitamaquine. Thus, it is worth to be studied in other in vitro and in vivo models for leishmaniasis experiments.

Acknowledgements: The authors are grateful to Prs. A. Laurens, R. Hocquemiller and to Dr C. Gleye for their input in this study. This work was supported by the VIHPAL program (French Minister of Research), EGIDE (Centre Français pour l’accueil et les échanges internationaux) and Felix Houphouet Boigny University, Abidjan (Ivory Coast). Our profound respect to the memory of Pr. L. Aké Assi who identifying the plant material.