ABSTRACT: A sensitive method was developed to determine Ethinyl Estradiol in human plasma by liquid chromatography-tandem mass spectrometric (LC–MS/MS). Separation of analyte and the Internal Standard (IS) Ethinyl Estradiol-d4 using SPE followed by LLE in plasma with TBME, was performed on a LC/MS/MS-API-5500 instrument with SB C18 HT (50mm×3.0mm) 1.8 µm columns at a flow rate of 0.300 ml/min with mobile phase consisting of Acetonitrile: 2 mM Ammonium Formate Buffer (80:20 v/v). The interface used with the API 5500 LC/MS/MS was used a turbo ion spray. The positive ions were measured in MRM mode for the analyte and IS. The method was linear over range of 5.000 - 308.560 pg/mL. The correlation coefficient is ≥ 0.9942 for Ethinyl Estradiol. The mean % recovery of extraction across QC of Ethinyl Estradiol in plasma was 68.48%. The reproducibility of Ethinyl Estradiol QC sample at room temperature and at 5 ºC was between 91.80 to 101.20% and 90.63 to 101.44% respectively. The % CV of intra and inter day precision were less than 19.74%. In the present study, a novel, fast, sensitive and robust method to quantify at very low concentration (pg/mL) Ethinyl Estradiol in human plasma using Ethinyl Estradiol-d4 as the IS was described.

Chemically it is 17-Ethynyl-13-methyl-7, 8, 9, 11, 12, 14, 15, 16, 17-octahydro- 6H- cyclopenta[a]phenanthrene-3, 17-diol. As a lipophilic hormone, it diffuses readily through cellular membranes to bind to estrogen receptors situated in the nucleus. Ethinyl Estradiol 3-5 is absorbed with maximum plasma concentrations occurring within 2 hours after drug administration.

Literature surveys of the drug shows that HPLC 6-10 LC-MS 11-19 and GC-MS 20 methods for the determination of Ethinyl Estradiol in human plasma and in pharmaceutical formulations either as a single and in combination with other drugs. The various published method of analysis is available but the proposed method is optimized to quantify at very low concentration (pg/mL), and suitable for the various laboratory conditions (Fig. 1). 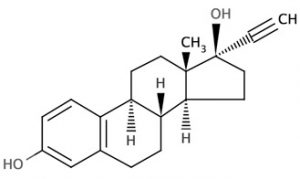 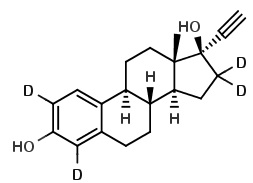 Mass Spectrometric Conditions: LC-MS/MS analysis was performed on an API 5500 LC/MS/MS (Applied biosystems) triple quadrupole mass spectrometer equipped with an electro spray ionization (ESI) interface with turbo ion spray. The positive ions were measured in MRM mode for the analyte and Internal Standard. For operation in MS/MS mode, a mass spectrometer fitted with an electrospray ion source interface was used for analysis. The source was operated initially at a temperature of 400 0C. The mass spectrometer was programmed to monitor the protonated molecule [M+H] + at m/z 530.30 via the first quadrupole filter (Q1), the product ion at m/z 171.10 was monitored via the third quadrupole filter (Q3). Finally, all MS parameters were manually fine tuned to obtain the highest MRM signals. The MRM transition m/z 530.30/171.10 was monitored for the detection of Ethinyl Estradiol as shown in (Fig. 2). In the same way for internal standard also processed as shown in (Fig. 3). 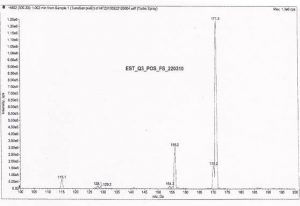 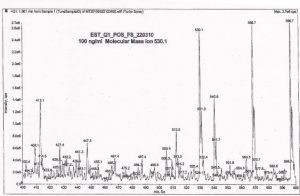 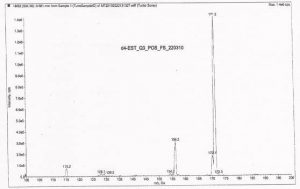 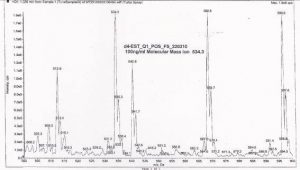 Preparations of Calibration Standard and Samples: Stock solution of Ethinyl Estradiol (400.00µg/mL) was prepared by dissolving 2.0 mg in 2 mL of 100% v/v Methanol and made up to 5 mL with same.

The Internal Standard stock solution (400.00µg/mL) was prepared by dissolving Ethinyl Estradiol-d4 2 mg in 2 mL of 100% v/v Methanol and made up to 5 mL with same.

Standard Intermediate solution of Ethinyl Estradiol (1.200 µg/mL) was prepared by transferring 15 µL stock solution to a 5 mL volumetric flask containing in 2 mL 20 % v/v Methanol and made up to volume 5 mL.

Standard Intermediate solution of Ethinyl Estradiol-d4 (4.000 µg/mL) was prepared by transferring 100 µL internal standard stock solution to a 10 mL volumetric flask containing in 5 mL 20 % v/v  Methanol and made up to volume 10 mL.

Working standard solutions for the plasma calibration curve and QC samples were prepared by diluting stock of Ethinyl Estradiol with 20 % v/v Methanol to yield the required concentrations.

Method Validation: The method was validated in accordance with ICH Guidelines. The objective of the work is to validate specific LC/MS/MS method for the determination of Ethinyl Estradiol in human plasma to ensure the selectivity, accuracy, reproducibility and sensitivity of the method. 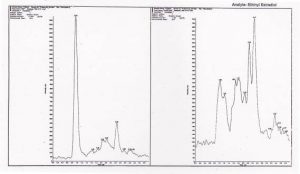 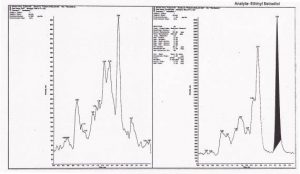 Dilution Integrity: Dilution integrity was carried out at six replicate two times diluted and four times diluted were prepared and concentrations were calculated against the freshly prepared calibration curve. The % accuracy of Ethinyl Estradiol nominal concentrations were 100.82% and 101.13% for 1 in 2 dilutions and 1 in 4 dilutions respectively. The % CV is 0.77% to 2.25%.

TABLE 3: SUMMERY OF PRECISION AND ACCURACY OF ETHINYL ESTRADIOL IN HUMAN PLASMA

CONCLUSION: The proposed method was found to be simple, sensitive, rapid and economical for the determination. All the results obtained are within the acceptance criteria. The developed method is suitable for estimation of plasma at low concentration (pg/mL) of Ethinyl Estradiol as a single analytical run. The high extraction efficiency, low limit of quantization, and wide linear dynamic range make this a suitable method for use in clinical samples for bioequivalence studies following oral administration of Ethinyl Estradiol (0.03 mg) tablets in healthy human subjects.

ACKNOWLEDGEMENT: The authors wish to thank the management of Hindu College of Pharmacy, Guntur for sophisticated analytical instrument facility and for supporting this work. We also thank Matrix (Mylan) Laboratories, Hyderabad, India for samples of Ethinyl Estradiol drug substance and IS. We are thankful for sophisticated analytical Instrument facility in IICT, Hyderabad, India.