ABSTRACT: A simple high-performance liquid chromatographic method was developed and validated for the determination of Temozolomide in rat plasma using paracetamol as internal standard.  The chromatographic separation was carried out with an isocratic elution using mobile phase consisting of 0.5% glacial acetic acid and methanol.  Plasma samples were run at a flow-rate of 1 ml/min using a kromasil C18(4.6×250mm) column and ultraviolet detection at a wavelength of 265nm. The retention times of Temozolomide and paracetamol were found to be 6.92 and 11.2 minutes respectively. The linearity of the method was achieved over the concentration range of 10-60µg/ml demonstrated good linearity with correlation coefficient 0.999. The method was validated for accuracy, precision, linearity, recovery in compliance to international regulatory guidelines

INTRODUCTION: Temozolomide (TMZ), an imidazotetrazine derivative, is a cytotoxic alkylating agent of broad-spectrum antitumour activity. Temozolomide was rapidly and extensively absorbed and widely distributed in tissues. It undergoes rapid chemical conversion in the systemic circulation at physiological pH to the active compound, MTIC (monomethyltriazeno imidazole carboxamide).

The distribution pattern of radioactivity was gender independent. Penetration into the brain following oral or intravenous administration was 10-15% based on the brain/plasma AUC ratio. Temozolomide can be taken orally, degrades spontaneously to an active metabolite and penetrates the blood–brain barrier. It is well tolerated, making it a suitable candidate for combination chemotherapy.

The aim of Present study was to validate the HPLC method for the determination of temozolomide in human plasma to allow pharmacokinetic studies in humans after the administration of TMZ 1, 2 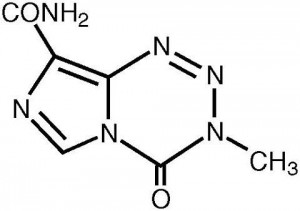 Analysis was carried out on a HPLC system (Perkin-LC 20AT) equipped with PDA detector auto sampler, pressure controlled by prominence pump and operated by total chrom Software. Kromasil C18 column (250mm × 4.6mm particle size 5 ?m) was used for separation. Mobile phase used for separation was mixture containing 0.5% glacial acetic acid and methanol (20:80 v/v). The flow rate was kept at 1.0 mL/min, column temperature was ambient (25°C), eluents were detected by PDA detector at 265 nm, and the injection volume was 20 ?L.

A standard stock solution of Temozolamide was paracetamol prepared by dissolving 100 mg drug in 100ml volumetric flask with methanol in order to make a concentration of 1mg/mL.

0.5ml glacial acetic acid was taken in 100ml volumetric flask. 100ml of water was added to make up the volume.

Plasma spiking solution of temozolomide was prepared for calibration curve in the range of 20-100µg/ml. 90µl plasma was taken in centrifuge tube and 10 µl of standard stock solution of temozolomide and 10 µl of internal standard paracetamol has to added. 1ml methanol was used for precipitation of plasma proteins after addition of methanol vortex for 10min then centrifuged at 4000 rpm for 10min. Supernatant was transferred into another tube and evaporated under nitrogen gas for 15min. 100 µl of mobile phase was added again and  centrifuged  at 4000 rpm for 10min. Supernatant solution was filtered through 0.45 µ filter paper. In similar way all the standards were prepared and analysed in HPLC for calibration curve.

Selectivity was evaluated by extracting different blank plasma samples. The absence of interfering peaks at the same retention time of analytes or internal standard was considered as evidence for selectivity 4.

Calibration curves were constructed using linear regression within the range of 10-60µg/ml of Temozolomide.

Recovery of analyte was evaluated by comparing the response of temozolomide in three solvents methanol, acetonitrile and ethyl acetate.

For precision and accuracy studies, samples were prepared at four concentration levels, limit of quantification (LOQQC), low (LQC), medium (MQC) and high (HQC) quality controls. Corresponding to 10, 40, 60 µg/ml respectively with six replicates each. Precision and accuracy was evaluated at inter and intra batch5.

Bio analytical HPLC method validation was developed for the quantifiable evaluation of temozolomide in plasma. Kromasil C-18 (4.6 x 250mm, 10μm) column for separation of temozolomide was used under the suitable isocratic conditions. The chromatography conditions, especially the composition of mobile phase were optimized through several trials to achieve good resolution and symmetric peak shape for the analyte (TMZ) and internal standard. The composition of the mobile phase was optimized by varying the percentage of methanol: 0.5% glacial acetic acid (10:90), 20:80 finally 30:70 chosen as the final mobile phase since it provided the best separation, with higher sensitivity and selectivity for the UV signal of analyte and internal standard figures are shown in 1, 2, 3. 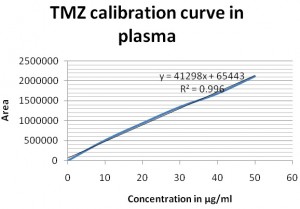 TABLE 1: SPECIFICITY OF THE METHOD:

Linearity was demonstrated from 10-60µg/ml. Table 2 shows data from calibration curves analysed for the evaluation of precision and accuracy on different days. The calibration curve includes 8 calibration standards which are distributed throughout the calibration range. The average correlation coefficient was found to be 0.9956 with goodness of fit.

To determine the intraday and interday precision of the method, repeatability studies were performed. The intraday and interday precision studies were carried out on two different concentrations (40 and 50 ?g/mL). The samples were injected in triplicate on the same day and also on three different days. Concentration was calculated from the areas obtained, and the results were expressed as % RSD. Results are summarized in Table 2.

Accuracy of the method was assessed by three different concentrations of pure drug that were added to a known pre analysed sample, and the total concentration was determined in triplicate, and the percent recovery of the added pure drug was found in the range of 98.67 to 99.98%, indicating that the method is found to be more accurate.

CONCLUSION: The presented bio analytical HPLC method is an easy, rapid, modest, accurate, precise, specific and linear with acceptable LOD, LOQ for the determination of temozolomide in plasma. The developed technique which is suitable for application to a pharmacokinetic, bioequivalence and drug interaction studies for the estimation of temozolomide from plasma.