INTRODUCTION: The seaweed gives great potential as a supplement in functional food or for the extraction of compounds. Philologically active substances in marine algae are classified into two types based on the difference in the mechanisms. They are non-absorbed high molecular materials like dietary fibers and low molecular materials, which are absorbed and which affect the maintenance of human homeostasis directly 1. All algal fucans have complex structures but recent studies have revealed ordered repeated units in homofucans from several species. Several homofucans have large proportions of both alpha -(1-3) and alpha- (1-4) Glycoside link ages with sulphate groups at C-2, without excluding the presence of other sulphates, acetyl groups or branches at positions 2,3 or 4 2.

Fast atom bombardment MS was proposed for the identification of arsenic compounds in environmental matrices 3 and successfully applied to the characterization of a partially purified Sargassum extract 4.

Positive ion electroscopy mass spectrometry (ES MS) spectra of arsenobetaine, arsenocholine, monomethylarsonic acid, DMAA, tetramethyl arsonium iodide and negative mode spectra of as (111) and As (V) were reported 5. Among the macromolecular constituents of the thallus of Sargassum, alginate was identified as the most important with respect to metal binding and selectivity 6.

Alginate is the common name given to a family of linear polysaccharides containing 1; 4-linked β-D-mannuronic (M) and α-L-guluronic (G) acid residues arranged in a no regular, block-wise order along the chain. The relative abundance of the M and G residues and their macromolecular conformation determine the physical properties and affinity of the alginate for divalent metals 7.

Extraction of macro algae: The marine macro algae of Padina australis was collected from Chagkumugam coast, shade dried and pulverized to powder in a mixer grinder. Required quantity of the algal powder of seaweeds were weighed, transferred to flask, treated with methanol until the powder was fully immersed, incubated overnight and filtered through a whatmann No.1 Filter paper along with sodium sulphate to remove the sediments and traces of water in the filter paper. Before filtering, the filter paper along with sodium sulphate was wet with absolute alcohol. The filtrate is then concentrated to 1ml by bubbling nitrogen gas into the solution. The extract contains both polar and non-polar components of the macro algal material. 2ml sample of the solutions was employed in GC-MS for analysis of different compounds.

Mass spectra were taken at 70ev; a scan interval of 0.5 seconds and fragments from 45- 450Da. The solvent delay was 0 to 2 min and the total GC-MS running time was 36 min. The relative percentage amount of each component was calculated by comparing its average peak area to the total areas. The mass detector used in this analysis was Turbo-Mass Gold-Perkin Elmer and the software adopted to handle mass spectra and chromatograms was a Turbomass.

RESULTS: The results on GC-MS analysis of active fraction of methanol extract in Padina australis were presented in Table-1 and Fig-1. Six compounds were detected in methanol extract of Padina australis.The compound Pentadecanoic acid 14-methyl ester showed the peak area 100% at the RT 17.17min and MW was 104, the compound 1, 2 Benzenedi carboxylic acid, butyl octyl ester was occurred the peak area of 91.5% at RT 17.63, extraction compound of 10-Octadecenoic acid, methyl ester was showed the peak area 78.6 at RT 18.95min. 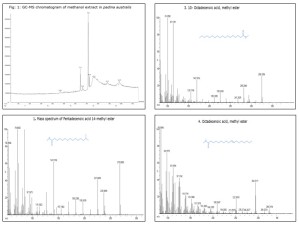 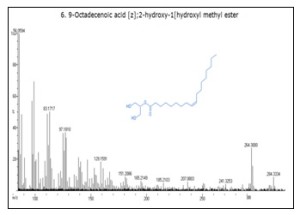 DISCUSSION:Marine chemicals have novel structures with pronounced biological activity and pharmacology. The study of such chemicals therefore is promising. High through put screening of marine metabolites for a given drug target can be achieved only if natural compounds are available as a database. Creating a database of natural products and sharing it with huge scientific community facilitates the understanding of basic mechanism of compounds and can reduce the timeline in drug discovery 8.

The yields of volatile compounds are better in dried seaweed rather than fresh seaweeds 9. The compounds of dried Laminaria sp. by Simultaneous distillation extraction and the compounds they found; those of identical to Sargassum polystum are dodecane 1-iodo, heptanal, 1- octen- 3-ol and hydrocarbons such as heptadecane and others 10. GC- MS analysis of major compounds of Cladophora glomerata second active fraction, Pentadecane, 8-hexyl- was found to be a major compound followed by the hydrocarbon compounds heptadecane, 9-hexyl and octacosane in third fraction 11.

The crude methanolic extract of A. orientalis was separated using gas chromatography analysis revealed the presence of seven fatty acids are Palmatic acid, Lauric acid, Myristic acid, Hexadecatrieonic acid, Stearic acid, Oleic acid, and alpha linolenic acid 12. Mass spectrum of the peak at 18.16 min was due to phthalide and the peak at 18.34 min was due to n-tetradecane, which had been added in a known amount as an internal standard for purposes of quantitating the products 13.