ABSTRACT: Phytochemicals from several herbaceous and spice plants have been reported to have defense properties against various diseases. Potential of some of such plants like Allium sativum, Curcuma longa, Boerhaavia diffusa, Pterocarpus marsupium and Zingiber officinale in cancer therapy has already been proved. The state of Kerala in southern India hosts large number of medicinal herbs and is also referred as a hotspot of biodiversity. The current study aimed at computational screening of potent lead molecules from ten selected medicinal plants and five spices widely used in Kerala, which are rich in biological diversity and its traditional values. Even though, the anticancer properties of all these plants and spices were reported, their mode of action and target molecules is not well explained. Hence, the interaction of these compounds with anti-apoptotic proteins Bcl-2 and Bcl-XL are studied and discussed in this paper. The -CDOCKER energy, -CDOCKER interaction energy, Hydrogen bonds, binding energy, and complex energy were predicted through molecular docking studies. Based on binding energy and CDOCKER scores, the active components of Pterocarpus marsupium, Aegle marmelos, Pseudarthira viscida, Allium sativum, Phyllanthus amarus, Boerhaavia diffusa and Catharanthus roseus were observed to have strong interaction with both the proteins. Pharmacokinetic analysis such as absorption, solubility, BBB penetration, and toxicity were also performed for these compounds. Comparative docking analysis showed higher interaction than the known inhibitors such as Obatoclax and apogossypolone. Finally, the lead molecules were screened based on their hepatotoxicity. Ten of them passed the analysis and some with high binding energy failed to do so. The lead molecules identified and their probable functional groups could be further reported to transform them as potential anti-apoptotic inhibitors.

INTRODUCTION: Cancer deaths are set to increase at an alarming rate in India and approximately one million new cases of cancer are identified in each year among the population of 1·2 billion 1.  Cervix and breast cancer are the most prevalent cases in women 2 and the top five in men are lip/oral cavity, lung, pharynx, stomach, and colorectal cancer.

Cytotoxic chemotherapy, radiation, and surgery have been used to treat this killer disease for the past few decades. Even though these methods are still widely used in the treatment, targeted therapies using small inhibitors and monoclonal antibodies are gaining more importance now 3.

In targeted therapy, drugs aim a specific biological target which is either a gene, tissue environment or a protein and arrests the uncontrolled growth of the cell. Using computer aided drug design methods, molecular interaction of targets and drugs can be easily studied. It is one of the most new approaches which span almost all the drug discovery stages. The main goal of the approach is to predict how the small molecule binds with the target and how strong it is. And the advantage is that it reduces time, cost, and risk factors than the traditional drug development methods.

Several proteins in apoptosis or programmed cell death play a major role in the development and progression of cancer. It triggers through the sequential activation of two distinct pathways 4. The intrinsic pathway is mediated by the Bcl-2 protein family, which includes the pro apoptotic proteins- BAD, BAX and anti apoptotic proteins- Bcl-2 and Bcl-XL. It regulates apoptosis by controlling the permeability of the mitochondrial membrane and prevents the release of the electron carrier, cytochrome c into the cytosol. Over expression of both Bcl-2 and Bcl-XL leads to cancer 5 and hence they are identified as therapeutic targets for various cancers including breast, leukemia, lung, colorectal etc 6, 7, 8, 9, 10.   Even if Bcl-2 and Bcl-XL are of the same family, it shares only 43 % of sequence identity and differs largely in expression. Bcl-2 resides in mitochondrion, ER and nuclear envelope 11. Bcl-XL is located in the nuclear envelope, extra-nuclear membranes like mitochondrion and also in cytosol 12. Therefore, specific targeting is more relevant in the drug design processes.

Bcl-2 and Bcl-XL were chosen as the target receptors due to their imperative role in regulating apoptotic pathway and cancer. The three dimensional structures of human Bcl-2 and Bcl-XL with phenylacylsulfonamide inhibitor (4AQ3) and N-(3-(5-(1-(2-(benzo[d]thiazol - 2 - yl) hydrazono) ethyl) furan-2-yl)phenylsulfonyl) – 6 - phenylhexan amide (3ZK6) respectively were retrieved from the Protein Databank (PDB) (http://www.rcsb.org/).

Binding or active sites of Bcl-2 and Bcl-XL were identified through literature survey and PDB site records. It is reported that a series of phenylacylsulfonamide have confirmed potent binding affinities for Bcl-2 hydrophobic cleft containing the residues Arg 105, Leu 96, Phe 157, Tyr161, Val 92, Tyr 67, Asp 70, Met 74, Arg 66, Phe 71 and Phe 63 13. Another molecular level study on Bcl-XL states that, it inhibits the activation of apoptotic signaling pathways through intermolecular contact with apaf-1 and cytochrome c. The interactional residues of Bcl-XL with cytochrome c were Glu 96, Arg 100, Tyr 101, Asp 132, Asn 136, Trp 137, Gly 138, Thr 190, Phe 191, Leu 194, Tyr 195, and Ser 203 and reveals that these binding sites will be potential druggable binding areas 14. The binding sites involving these critical residues on both Bcl-2 and Bcl-Xl were defined using “From current selection” protocol in Defined and Edit Binding Site tools of Discovery studio 4.0.

Three dimensional structures of all the compounds were retrieved from PubChem database. Before performing the molecular docking using Discovery studio 4.0, the ligands were prepared using Prepare Ligands protocol of Discovery studio 4.0. This includes removal of duplicates, enumerating tautomers / isomers, and generating three dimensional conformations. Druglikeness of these compounds was determined using Filter by Lipinski’s and Veber rule.

Docking procedures were done using CDOCKER protocol of Discovery studio 4.0 to identify the best pose of ligands in the active site region of the targets. It allows flexible docking of ligands and by default; it was set to generate 10 different poses. In addition to molecular docking, pharmacokinetic analysis also was performed to check the bio availability of the identified compounds using ADMET descriptors protocol of Discovery studio 4.0.  The results were analyzed and interpreted to highlight the best phytocompounds for drug development.

RESULTS AND DISCUSSION: Inhibiting apoptotic regulator proteins Bcl-2 and Bcl-XL with compounds may potentially overcome the development of cancer. There are drugs developed which explicitly targets these proteins and Oblimersen sodium, Obatoclax, Gossypol, Apogossypol, Apogossypolone are few among them 15, 16. We here in used molecular docking method to identify the lead compounds from plants which interacts with these proteins. The target proteins from PDB were prepared and the binding sites were defined. Stable form of Bcl-2 protein and Bcl-XL protein was obtained in -3141.7145 and -5986.4987 kcal/mol respectively. A total of 574 phytochemicals were retrieved from selected plants. To find the best fit ligand for the target; the protocol “Prepare Ligands” was applied to generate tautomers and isomers of 2929 ligand structures from 574 phytochemicals. Compounds generated when filtered to determine whether it possess pharmacological properties yielded 868 ligands which satisfied Lipinski’s and Veber rule and these compounds were further used for the molecular docking procedures.

Molecular docking studies were performed for both the proteins because even if they belong to same family, they are not identical and studies reported that each protein has different affinities to compounds. Docking calculations were based on –CDOCKER energy, -CDOCKER interaction energy, number of hydrogen bonds involved, binding energy and complex energy. Analysis of docking was performed based on the following criteria’s:

Docking analysis with the target- Bcl 2:

Molecular docking analysis was performed on anti apoptotic protein Bcl 2 and phytocompounds. It predicts the interaction of ligand with receptor protein and amino acid residues involved in this complex. After docking, the ligands were ranked based on their CDOCKER and binding energy. Out of 868 ligands tried 20 were screened out based on the high CDOCKER and binding energy. The docking results of selected ligands were provided in Table 1.

Docked confirmation revealed that these ligands were interacting to the aminoacid  Arg 105 which is an important active site residue.  The phytocompounds such as Methyl 4 tyramine, 3,7,4- trihydroxy flavone, Ephedrine, Ellagic acid and Gallocatechol from Pseudathira viscida, Pterocarpus marsupium, Sida rhombifolia, and Phyllanthus amarus exhibits higher score and strong binding affinity with least complex energy. The study shows that these screened 20 compounds has good inhibitory activity on Bcl2 and can be helpful in cancer treatment.

An in silico study about the involvement of active site residues with several chemically synthesized compounds such as ABT-737 and ABT-263 has been reported. It suggests that the drugs show close contact with these residues and are potent inhibitors 17. In our study, docking procedures of Bcl-XL was performed with the ligands in the same druggable binding areas. Docking results were tabulated and shown as Table 2.

Metalline and 5-deoxy kaempherol from Pterocarpus marsupium found to be satisfied with the docking scores and binding energy followed by Boeravinone D from Boerrahavia diffusa, Vanillic acid from Curcuma longa and kaempherol from Allium sativum. All 23 compounds showed high scores and binding energy possess complex energy lesser than the protein energy. So we can conclude that all these compounds are stable when they are seen as complexed.

For comparative analysis, known drugs were developed to inhibit the activity of these proteins. As a comparative study, we performed the docking of known inhibitors Obatoclax and apogossypolone with Bcl-2 and Bcl-XL respectively. The results were tabulated as Table 3. Hydrogen bond formed with the protein and inhibitors were found to be in the defined sites and the interaction was shown as in Fig. 1 and Fig. 2.

Parameters such as absorption, solubility, BBB penetration, and toxicity for the 43 compounds were predicted using ADMET descriptor protocol of Discovery studio 4.0.  Analysis was performed based on the criteria’s suggested in the same protocol. Results are provided as Table 4.

Properties of compounds against Bcl-XL: Compounds with high dock score and binding energy such as Metaline, 5-deoxy kaempherol, Boeravinone D, Kaempherol etc. failed to pass the pharmacokinetic analysis based on toxicity. But a total of four compounds such as Curcumin II, Vanillic acid, Alliin and Dodecanoic acid were selected. Curcumin II and vanillic acid from Curcuma longa passed all the ADMET analysis and the rest two Alliin and Dodecanoic acid showed solubility level of 5 and BBB level as 1 respectively. Solubility level-5 denotes too soluble compounds and BBB level-1 denotes as high penetration compounds. The compounds which failed the analysis needs several modifications and can be further used as a potent molecule without side effects. 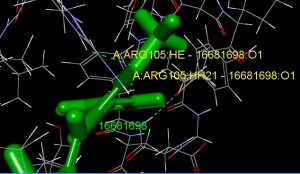 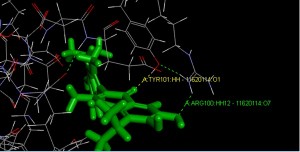 Herein, we screened a total of 574 phytochemicals identified from fifteen plants so as to help developing novel therapeutic drugs targeting Bcl-2 and Bcl-XL proteins. Phytochemicals with high scores and binding energy were obtained and later performed the pharmacokinetic properties to determine whether these screened compounds can act as lead molecule. Some of the compounds failed to pass the pharmacokinetic analysis even if they possess strong interaction and scores with target protein. These compounds can be further utilized to develop therapeutic drugs or targeted drug after structural modifications which will be a dramatic shift in treating the malignancy and a promising way to develop more personalized cancer therapies.

ACKNOWLEDGEMENT: This project was supported by Indian council of Agricultural Research and Department of Biotechnology (DBT), Government of India