ABSTRACT: Candesartan cilexetil, a prodrug is a racemic mixture containing one chiral center at the cyclohexyloxy-carbonyloxy- ethyl ester group. It is soluble in dimethyl formamide, acetone, methanol, 0.1 N sodium hydroxide solution and insoluble in water. Objective of the present study was to develop a simple, sensitive, accurate, precise and rapid derivative spectrophotometric bioanalytical method for the estimation of candesartan in pure form. For the estimation of candesartan, solvent system employed was absolute methanol and wavelength of detection (λdet) was 268.8 nm for first order derivative spectroscopy. The linearity was obtained in the range 2 – 10 µg/ml with a regression coefficient of R2 = 1. The limit of detection is 0.99 µg/ml and limit of quantification was found to be 3.1 µg/ml. Obtained results showed that there is minimum intraday and inter day variation. The developed method was validated and recovery studies were also carried out. Sample recovery using the above method was in good agreement with their respective labeled claims, thus suggesting the validity of the method and non-interference of formulation excipients in the estimation. Thus, Bioanalytical method development by first order derivative spectroscopy method is simple, rapid and reproducible and further it can be used for the analysis

INTRODUCTION: Candesartan cilexetil prodrug is a racemic mixture containing one chiral center at the cyclohexyloxy-carbonyloxy- ethyl ester group 1. Angiotensin II receptor blockers (ARBs) are a new class of therapeutic agents for hypertension 2. The ARBs have a more direct mechanism of action than other drugs affecting the angiotensin converting enzyme inhibitors 3.

Candesartan is a potent, highly selective ARB that is devoid of agonist activity. 4 It is administered orally as Candesartan cilexetil, which is rapidly and completely hydrolyzed to Candesartan, the active moiety, during absorption from the gastrointestinal tract. Candesartan cilexitil is white to off white powder 5. It is soluble in dimethyl formamide, acetone, methanol, 0.1 N sodium hydroxide solution and insoluble in water 6.

Literature review suggested several bioanalytical methods that have been reported for the estimation of Candesartan in bulk or pharmaceutical formulations include High Performance Liquid Chromatography. Literature review also suggested that there is no bioanalytical derivative spectroscopic method. The objective of the work was to develop simple, accurate, precise and economic First order bioanalytical derivative spectroscopic method to estimate the candesartan in bulk. The method should be simple, accurate, precise, reproducible and statistically valid.

Each ml of Candesartan SMEDDS contains-

SMEDDS has been used as the commercial preparation of candesartan for the method development by derivative spectroscopic technique.

Thus, the objectives of project:

The standard sample of CANDESARTAN was obtained as gift sample from Dr. Reddy’s Laboratory Pvt. Ltd., Hyderabad, A.P., India. The candesartan SMEDDS was used as commercial preparation for the estimation of candesartan.

Note: Permission has been obtained from IAEC for performing experiment on animal models, Form B, per rule 8(a).

The stock solution of candesartan is prepared by dissolving 100 mg of drug in 100 ml methanol in volumetric flask with continuous shaking.

A suitable amount of standard solution of candesartan was added to 0.5 ml plasma sample. Methanol was used as the precipitating agent and was added to drug spiked plasma. The solutions were vortex mixed for 1minute and centrifuged at 5000 rpm for 15 mins using an Eltek, Model TC 650 D centrifugal device. The clear supernatant liquid was separated, the solutions were then filtered with 0.45 µ filter and the extracted candesartan was reconstituted with the solvent methanol. The appropriate dilutions were prepared in the above stated manner. And transfer it to quartz cell for analysis.

With the stock solution of Candesartan, known concentration of 10μg/ml plasma standard is prepared by suitable dilution with methanol. Wavelength scanned for the maximum absorption of drug solution using UV-Visible spectrophotometer within the wavelength region of 200–400 nm against blank methanol. Convert the normal mode obtained spectra to first order derivative. The wavelength that shows the peak with a highest absorbance is considered as absorbance maximum of the drug. The result is presented in Fig. 1. 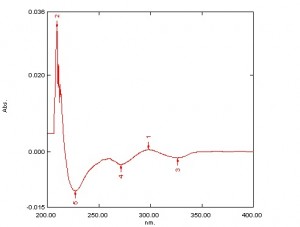 The validation of method was carried out by establishing linearity, limit of detection (LOD) and limit of quantification (LOQ) and within- and between- day precision and accuracy. 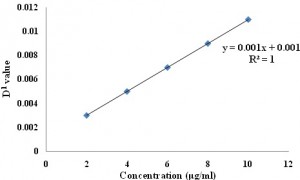 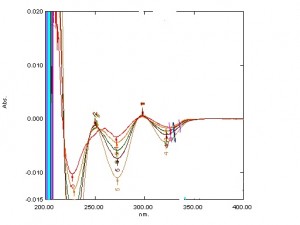 FIG. 3: DEPICTING THE LINEARITY FOR THE CONCENTRATION RANGE (2 – 10 µG/ML)

The precision of method was ascertained; the percent relative standard deviation were calculated and presented.

The prepared stock solution was subsequently diluted to get 2μg/ml, 4μg/ml, 6μg/ml 8μg/ml, and 10μg/ml. The resulting solutions absorbance was measured at detection wavelength of 268.8 nm using double beam UV spectrophotometer against blank of methanol. The findings was made at different time intervals in a day times in a day and performed continuously for six days. Convert the normal mode obtained spectra to first order derivative. The results obtained were tabulated and studied for inter day and intraday variation. The results are presented in Table 2 (a) and 2 (b).

The accuracy/recovery studies were carried out with the commercial preparation of candesartan SMEDDS and percentage recoveries was calculated. Convert the normal mode obtained spectra to first order derivative. The reproducibility of estimation was determined by performing the drug content of different samples. The results of accuracy studies were expressed in %. The result is presented in Table 3.

The assay studies were carried out with the help of candesartan SMEDDS. The percentage purity was calculated. Convert the normal mode obtained spectra to first order derivative. The reproducibility of estimation was determined by performing the drug content of different samples. The results of assay studies were expressed in %. The result is presented in Table 4.

To determine the stability of candesartan in plasma at ambient and refrigeration temperature, four sets of low (4 μg/ml), medium (7 μg/ml) and high (9 μg/ml) concentrations of the spiked calibration standards in plasma were divided in to 18 test tubes. One set of spiked samples was assayed immediately and was considered as standard (100 %). Two of the sets were stored at a temperature of -4o C in a refrigerator for 24 hours and one week. Then one of the sets was stored at -20o C in a deep freeze for one week. The remaining set was allowed to stand at ambient temperature for 24 hours. Stability measurements then carried out. The results were evaluated and comparing these measurements with those of standards and expressed as percentage deviation. The results are summarized in Table 3. The plasma samples were found to be stable for over one week at -20o C (deep freeze) and 24 hours at room temperature and at -4o C (refrigerator). The stability of analyte stock solution was tested for over 7 days in the same assay. The results indicated stability of stock solution for over 7 days at both room temperature and refrigerator temperature. The results are presented in Table 5.

CONCLUSION: Candesartan cilexetil prodrug is a racemic mixture containing one chiral center at the cyclohexyloxy-carbonyloxy- ethyl ester group. Angiotensin II receptor blockers (ARBs) are a new class of therapeutic agents for hypertension. The ARBs have a more direct mechanism of action than other drugs affecting the angiotensin converting enzyme inhibitors. Candesartan is a potent, highly selective ARB that is devoid of agonist activity. Due to this important pharmacological response development of sensitive and accurate methods for determination of candesartan is desired. In the present study a simple, accurate, precise and economic first order bioanalytical derivative spectroscopic method was developed to estimate the candesartan in bulk and pharmaceutical dosage forms. The developed bioanalytical method for candesartan by using first order derivative spectroscopy is found to simple, rapid and selective and the amount of drug recovered were same as the label claim and precise. It can be conveniently employed for the routine analysis and quantification of Candesartan.

ACKNOWLEDGEMENTS: Author (Gunjan Kalyani) would sincerely thank specially to My Guide Mr. Vishal S. Deshmukh Sir for his constant support and guidance, and lab technicians SRIP, Kumhari, Durg, C.G. for their contribution in carrying forward the research work, for providing the necessary support, for his kind and valuable guidance, and for providing basic facilities in lab. A very special Thanks to my Ideal person, inspiration Mr. Din Bandhu Dinanath Baghel for providing his consent regarding this article.