ABSTRACT: The biotransformation of different nitrile compounds into valuable acids was attempted using whole cells of nitrile hydrolyzing enzyme produced from a bacteria strain (BITSN007) isolated from sludge sample of Hot spring Surajkund, Jharkhand. Based on the biochemical characterization, the isolate producing nitrilase is predicted as Bacillus sp. The nitrilase production was observed as intracellular and inducible in nature. The preliminary results showed broad substrate specificity of enzyme, and the highest activity was obtained at 50 ºC and at pH 7.0 with a substrate concentration of 5 mM. Out of all the substrates, nitrilase showed greater activity for propionamide and converted it to propionic acid, which finds application in different food and chemical industries.

INTRODUCTION: Nitrilases are enzymes, which hydrolyze different nitrile compounds into their carboxylic acids and amides. These groups of enzymes are used in various industrial preparations and useful in bioremediation and detoxification processes etc. Harper first reported the bio-transformation of nitriles in plants to corresponding acids in 1977 1. The microbial sources of nitrilase enzymes are explored widely in many literatures for biotransformation due to finite availability in plants. A large number of micro-organisms with nitrile metabolizing enzymes have been studied from different sources such as Streptomyces sp., Bacillus sp. Pseudomonas sp., Agrobacterium tumefacians d3, Acidovorax sp., Arthobacter 31, Bradyrhizobium sp.

The chemical hydrolysis of nitriles lead to carboxamides and carboxylic acids, respectively, that is widely utilized in industries and a topic of research in academics, but the processing requires harsh conditions for completion of reaction along with releasing a large amount of by-products detrimental to the environment. In contrast, bio-transformation of nitriles into the corresponding carboxamides and carboxylic acids proceeds with excellent chemo-, regio, and stereoselectivity under very mild conditions. The potential of bio-transformation of nitriles has been illustrated by the well-known example of manufacturing acrylamide from microbial hydration of acrylonitrile 10.

The production of these enzymes is influenced by medium compositions and types of inducers that influence the enzyme synthesis. The schematic representation of biotransformation of nitriles to different products is shown in Fig. 1. Nitrile-converting biocatalysts have gained considerable interest from the point of treating toxic nitrile and cyanide-containing wastes and as biological agents for the synthesis of chemicals for a wide range of applications such as in pharmaceutical, food industry, cosmetics, etc. 2, 10 Various acids (acrylic acid, adipic acid and propionic acid etc produced during nitrilase mediated conversion have potential applications in synthesis of paint, cosmetics, food industries and different active intermediates in chemical and pharmaceutical industries. The present study highlights the use of whole cells of different bacteria for their nitrile degradation efficiency towards different -CN group-containing compounds. Out of the four, one isolate (BITSN007) showed broad substrate specificity and higher nitrilase activity with respect to propionamide. Further, the conversion of pro-pionamide to propionic acid is confirmed by FTIR. 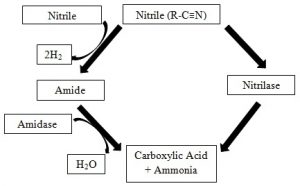 Selection of Nitrile Degrading Bacteria: Nitrile hydrolyzing isolates with nitrilase activity were isolated from the sludge sample of Hot spring, Surajkund, Jharkhand, India, using the specific medium. Luria Bertani agar plates were used in the presence of phenol red (0.02%) as an indicator and different nitrile inducers (1 mM) as primary screening with incubation at 37 °C for 24 h. Further, the pure cultures were maintained in Luria Bertani agar plates with respective inducers.

Media Selection for Bacterial Growth and Nitrilase Synthesis: The microorganisms were enriched in five different media by inoculating the pure colony of bacterial isolates for determining the bacterial growth and nitrile degrading activity as a measure of secondary screening by incubating the production medium at 37 oC for 24 h under the agitated condition at the speed of 175 rpm in an orbital shaker. Inducers such as adiponitrile, acrylonitrile, indole 3-acetonitrile, and a mixture of the three nitriles at a concentration of 1.0 mM were added after sterilization of the medium aseptically. The grown cell broth was harvested by centrifugation at 10,000 rpm for 10 min at 4 °C. The pellets thus, obtained were washed twice with 0.1M potassium phosphate buffer (pH 7) dissolved in a proper amount of buffer and was stored at 4 °C for the study of nitrilase activity 2. The composition of the different media is mentioned in Table 1.

Biochemical Characterization: Various biochemical tests such as catalase, oxidase, SIM, Citrate, carbohydrate fermentation, MRVP, TSI were done with the isolate BITSN007 for the preliminary identification of the most suitable isolate up to genus level.

Measurement of Nitrilase Activity: The activity of nitrilase was assayed in 1.0 ml reaction mixture comprised of 0.1 ml of the whole cells (enzyme), 0.1 ml of different substrates (5 mM), and 0.8 ml of 0.1 M phosphate buffer (pH 7) and incubated for 1h at 50 °C. The enzyme catalyzed reaction was terminated by centrifugation of enzyme substrate reaction mixture and the supernatant thus obtained was used for ammonia estimation (activity of nitrilase) by Berthelot reagent 18. The activity of nitrilase is expressed in the unit (IU), which is defined as the micromoles of ammonia released per minute per ml of reaction at operating conditions.

Specificity of Nitrilase: Different nitriles at a concentration of 5 mM were tested as a substrate during the reaction to observe the preference of substrate by selected bacterial Bacillus sp. at operational conditions.

Fourier-transform Infrared Spectroscopy (FT-IR): The analysis of the biotransformation reaction was performed through Fourier-transform infrared spectroscopy (FTIR). The FTIR spectrum of the transformed product in the reaction mixture and reference substrate and reference product was confirmed and expressed as wavenumber in the range of 500-4000 cm-1. Different band patterns obtained from the FTIR analysis were compared and analyzed 14.

Isolation and Screening of Bacterial Isolates: The primary screening of nitrile degrading bacteria was performed in phenol red agar plates supplemented with inducer and where the colour of media turned red to yellow, suggesting the formation of acid during the incubation Fig. 2. During the primary screening, the number of colonies formed (CFU) on the specific LB agar plates was also counted and presented in Table 2. The purified isolates were further grown in a liquid production medium by an enrichment method using modified basal media supplemented with 5 gl-1 yeast extract to fasten the growth. The strategy used for isolation of the nitrile hydrolyzing bacteria was to provide the inducers as (adiponitrile, acrylonitrile, indole 3-acetonitrile, and mixture of these three nitriles) the nitrogen source for the growth.

Role of Five Different Media on Nitrilase Production: A large number of different micro-organisms have been isolated from different sources using a range of media as mentioned in literatures, but optimization of different parameters, including media optimization, has been insufficient. In the present study, the growth of biomass in five different media was tested for enzyme activity with four different isolates, and observation perceived against different substrates at 37 °C are presented in Fig. 3A to C. From the experimental results of Fig. 3A to C, it was noticed that medium - 5 provided the highest whole-cell activity as compared to other media used for enzyme production and assay at operating conditions, and hence, medium - 5 (modified) was selected for further studies. Further, it was found that the activity was restricted in whole cells, and the supernatant did not show any nitrilase action. 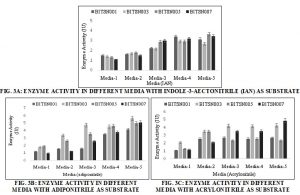 Biochemical Tests: Based on the observations on nitrilase catalysis by different bacterial isolates, the most suitable isolate BITSN007 yielding maximum activity was selected for morphological and different biochemical characterization as mentioned in Table 3.

The gram staining of BITSN007 is given in Fig.  4. The gram’s staining showed gram-positive and thin rod-shaped morphology of isolate BITSN007. The culture is able to hydrolyze starch, casein, citrate, gelatine and ferment five different carbohydrate sources used during biochemical studies without gas production. Further, BITSN007 was observed as catalase, oxidase, and MR VP negative. Moreover, H2S gas production started with the reduction of nitrate to nitrogen dioxide. According to Bergey’s manual, the bacterial isolate BITSN007 belongs to group 18 and is predicted as Bacillus sp. 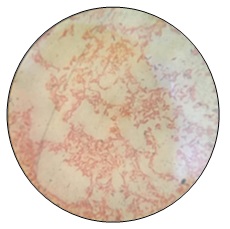 Influence of Temperature on Activity of Nitrilase: The influence of incubation temperature on biocatalysis by Bacillus sp using propionamide was performed in the range of 35 °C to 65 °C, and the activity is shown in the figure: 5. As observed from Fig. 5, the nitrilase activity is maximum when the incubation temperature reached 50 °C, and thereafter, the whole cells' activity decreased. Various other researchers also reported similar types of observations, but the substrate used in enzyme reaction was different 17. 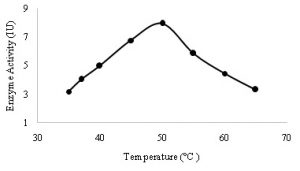 Effect of Substrate Specificity: The substrate affinity of nitrilase activity was carried out for seven different nitriles and amides such as adiponitrile, acrylonitrile, and indole 3-acetonitrile, a mixture of these three nitriles (fixed concentration), 3-cyanopyridine, acrylamide and propionamide at 5 mM concentration and results are mentions in Fig. 6. It has been observed from Fig. 6, that propionamide yielded the highest activity, followed by acrylamide, adiponitrile, acrylonitrile, and 3-cyano-pyridine. The last activity of the enzyme was observed against indole 3- acetonitrile followed by mixed (adiponitrile, acrylonitrile and IAN) substrate. The observation further inferred that BITSN007 showed broad substrate specificity as it was able to hydrolyze maximum nitriles and amides. 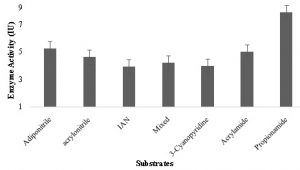 Analysis of whole Cells Enzyme Catalysed Reaction Through FTIR: The analysis of the reaction products and reference compounds (propinamide and propionic acid)  was attempted by FTIR (FTIR spectrophotometer, IR- Prestige 2, Shimadzu Corporation, Japan) in the range of 400- 4000 cm-1 using potassium bromide (KBr) cells. The IR spectrum of the substrate propionamide, product propionic acid, and the enzyme-substrate reaction mixture was compared Fig. 7A to C. The vibrational stretching and the wavenumbers of functional groups are depicted in below Table 4.

The FTIR spectroscopy for the hydrolysis of different nitriles, amides, and the synthesis of their corresponding products were compared from the published data of different literatures.

The stretching of carboxylic salt was reported at the region of 1332-1390 cm-1 15. In the present work, the enzyme-catalyzed reaction showed the stretching of different functional groups in a similar range and therefore, confirming the synthesis of propionic acid from propionamide as substrate. 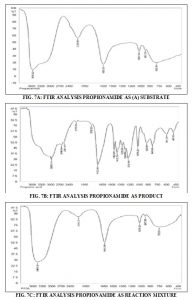 CONCLUSION: The nitrile metabolizing enzymes provide green synthesis to various amides and acids with broad applicability and therefore have commercial interest. Nitrilase produced from bacterial isolate BITSN007 (Bacillus sp) in the present work catalyzes the hydrolysis of nitriles and amides to acids, respectively. The maximum production of nitrilase was obtained at 37 °C for 24 h of incubation in modified medium-5 under supplementation of different inducers.

ACKNOWLEDGEMENT: Authors are extremely thankful to Birla Institute of Technology, Mesra, Ranchi for financial assistance (Ref No: GO/Estb/SMS/2019-20/2122 and Dean (AP) /2018-19/38) to carry out the present work. The authors also acknowledge the Central Instrumentation Facility of BIT Mesra, Ranchi, to analyze different samples.

CONFLICTS OF INTEREST: There are no conflicts of interest between the authors.