ABSTRACT: Biochemical characterization of enzyme is the most fundamental aspects of enzymology from industrial point, as it is desirable to choose an enzyme which will have the fastest reaction rate per unit amount of enzyme which indicates the maximum effect for the minimum amount of added catalyst. In this study, Protease enzyme was extracted from Z. officinale and purified by using various down streaming techniques up to apparent homogeneity from which a model has been generated based on mathematical modelling. Neural networking approach has been applied to optimize the incubation time, pH stability, temperature stability, initial substrate concentration and initial enzyme concentration on casein hydrolysis. The purified protease from Z. officinale is thermo stable and appears to be a promising candidate in applications on various industrial sectors.

Introduction: Proteases also termed as peptidases or proteinases are enzymes play vital role in protein digestion and are ubiquitous among organism like plants, animals and microorganisms. They are involved in health and wellbeing by performing a significant role in survival and maintenance of the organism 1. The classification of proteases is based on the concepts of catalytic type, clan, family and peptidase 2, 3. During normal physiology and disease cleave of proteins occur due to protease 4. Proteases, is one of the most important groups of enzymes which is having commercial applications. The annual sales account 60% of the total world enzyme market 5, 6.

Plants protease respond against herbivore attack by an array of defenses that inhibit the digestive proteases of the feeding herbivores and reduce their growth, development and fertility 7. Plant proteases are involved in almost every regulatory process by releasing peptide hormones, shedding receptors, cleaving transcription factors, activating pro-enzymes or eventually degrading specific proteins. As, protease activity is a subject of active research in virtually every field in plant biology. Therefore, researchers keep searching for novel sources of plant protease to meet commercial needs. Hence, Zingiber officinale is of considerable interest as a potential new source of protease for industry.

Zingiber officinale rhizome has been found to contain proteolytic enzymes reported by Thompson et al., in 1973 8. Among all the plant protease ginger protease is one of the least studied of the plant thiol proteases including papain, bromelain, ficin and actinidin 9, 10. Ginger protease is an active meat tenderizer against collagen and other connective tissue proteins 11-13. In order to promote the commercial utilization of ginger protease on food and other industry, it is important to characterize the enzyme from different varieties of ginger. This study deals with the biochemical characterization of the protease from the Zingiber officinale and integrated the results into mathematical model based on neural network approach.

The artificial neural networks (ANNs), are computational programs projected to simulate biological neural systems facilitates data analysis tools to handle such complex, nonlinear relationships 14, 15. Artificial neural network is a machine learning process that requires a structure of multiple layers of interconnected variables or nodes. This network comprises and output layer of processing units interconnected via one or more hidden layers 16, 17. A machine learning model facilitates improvement and scale-up of extraction processes from laboratory to pilot and industrial scales 18.

Material and Methods: All the chemicals used for the following experiments were of analytical grade. Zingiber officinale was obtained from local market.

Assay of Protease Activity: Protease activity was assayed using Folin-Ciocalteau method 19. The reaction mixture containing casein (1%), enzyme, 0.05 M sodium acetate buffer (pH 5.0) was incubated for 30 min at 30 °C followed by addition of 0.5 M NaOH and folins reagent. 1 International Unit of protease enzyme is defined as 1μg of tyrosine released per minute per ml under standard assay conditions. The amount of protease produced was measured with the help of a tyrosine standard graph. The activity was reported as mean of three determinations.

Assay of Protein: The total protein in the sample was determined by Lowry method using bovine serum albumin as the protein standard 20. The O.D. was taken at 750nm. The protein content is expressed as mg/ml.

Extraction of Protease Enzyme from Zingiber officinale: The pre-weighed samples were crushed in sodium acetate buffer (pH 5.0, 0.05 M), filtered through Whatman filter paper and centrifuged for 20 minutes at 10,000 rpm at 4 °C. The pellet was discarded, supernatant collected and used for biochemical characterization.

Effect of Incubation Time on Protease Activity: To investigate the effect of incubation time on casein hydrolysis, 0.1ml of enzyme solution in 1ml of 1% casein stock solution with the reaction mixture was incubated at different time intervals ranging from 10 min to 90 min and the protease activity was determined using standard conditions.

Effect of pH on Protease Stability: To study stability as a function of pH, 100μL of the crude enzyme was mixed with 100μL of the buffer solutions and incubated at 30 °C for 2 hr, then aliquots of the mixture were taken to measure the residual protease activity (%) under standard assay conditions.

Effect of Initial Enzyme Concentration on Casein Hydrolysis: The rate of enzyme-catalysed conversion of substrate to product is under assay conditions directly proportional to enzyme concentration. Although the rate of hydrolysis increases with increase in enzyme concentration, its characteristic differs for each enzyme. Accordingly, the reaction mixtures were prepared varying the enzyme concentration from 10 to 100µl with substrate concentration of 1ml in the sodium acetate buffer (pH 5, 0.05 M), then were incubated at 40 °C for 30 minutes then folins reagent was added again incubated for 5 min at 30 °C then protease activity was determined at 660 nm.

Effect of Substrate Concentration on Casein Hydrolysis: One of the most fundamental factors affecting the enzyme activity is substrate concentration. In this experiment reaction mixtures were designed varying the substrate concentration from 0.2 to 1.4ml from 1% casein solution to which 100µl enzyme was added. In reaction mixture, sodium acetate buffer (pH 5, 0.05 M) was added and each sample was incubated at at 40 °C for 30 minutes then folins reagent was added again incubated for 5 min at 30 °C then protease activity was determined at 660 nm.

In-silico Analysis: Neural networks are mathematical models for representing the biological processes of the human brain 21, 22. These are also commonly referred to as parallel distributed processing (PDP) models or simply neural nets. These mathematical models can then be used to generate computer graphics which illustrate the usefulness of these techniques for solving problems in such areas as optimization and pattern recognition of speech and images. A neural network is a mathematical model that is defined as a directed graph composed of neurons as the nodes and synapses or nerves as the arcs with an algorithm that describes how the impulses are conducted through the network 23. The model was generated by using EasyNN-plus which grows multi-layer neural networks from the data in a Grid. The neural network input and output layers are created to match the grid input and output columns. Hidden layers connecting to the input and output layers can then be grown to hold the optimum number of nodes. Each node contains a neuron and its connection addresses.

Results and Discussion: The artificial neural network (ANN) is set of processing units called neurons. The ANN can be used to approximate the relationship between input and output signals of the system 24. ANNs use a mathematical or computational model for information processing. This shows the study of the effect of pH stability, temperature stability, initial enzyme concentration, substrate and time incubation. Five inputs fed to the five nodes are pH, temperature, initial enzyme, substrate concentration and incubation time. The output taken from the single output node is the rate hydrolysis (Fig. 1).

The prediction view has two boxes that show how close the predicted value for each example output is to the true value. The training and validating examples are shown in separate boxes. The position of the values on both axis are scaled to be from a minimum of 0 to a maximum of 1. Predicted outputs for training examples get closer to the true values as training progresses. If the predicted values are very close to the true values then the dots will be on the diagonal line. If most of the dots are close to the diagonal line the network may be over-trained and it may not generalize well (Fig. 3). 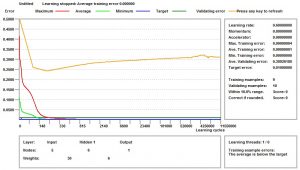 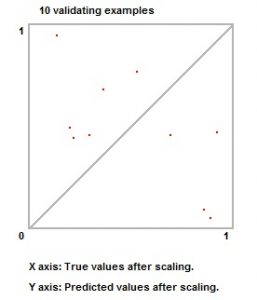 Fig. 4 It shows the importance and the relative importance of each Input column. The Importance is the sum of the absolute weights of the connections from the input node to all the nodes in the first hidden layer. The inputs are shown in the descending order of importance from the most important input.

CONCLUSION: Protease always play vital role in every field of life. Researchers are still working in this field of science for huge enzyme production. In the present study mathematical modelling has been applied to represent the biochemical characterization of the protease from Zingiber officinale. The mathematical modelling is playing vital role in designing appropriate controller for a non-linear process. Hence, the neural networking approach has been applied as the rate of hydrolysis not only depends on several parameters in a non-linear way but they may also be considerable amount of interdependencies between the environmental parameters. Our model may be further applied to optimize the working condition of maximizing the rate of hydrolysis.

ACKNOWLEDGEMENT: We are grateful to Director, Amity Institute of Biotechnology, Amity University Uttar Pradesh, Noida, for his constant support and encouragement during this study.