INTRODUCTION: Various industries are now searching into sources of alternative, more natural and eco-friendly antimicrobials, antibiotics, antidiabetics, antioxidants and crop protection agents. Medicinal plants have provided a good source of a wide variety of compounds, such as phenolic compounds, nitrogen compounds, vitamins, terpenoids and some other secondary metabolites, which are rich in valuable bioactivities, e.g., antioxidant, anti-inflammatory, anti-tumor, antimutagenic, anti-carcinogenic, antibacterial, antifungal and antiviral activities 1, 2. India is endowed with a rich wealth of medicinal plants. India recognizes more than 2500 plant species which have medicinal values. Plants are the source of many bioactive compounds 3.

Traditionally it is useful in the indigenous medicine, as its pods and leaves showed purgative activities and cytotoxic activity 4. Bark of C. nodosa is used as one of the ingredients in antidiabetic ayurvedic formulation 5. Leaves are proved to be active against Herpes simplex infection 6. The presence of these antidiabetic phytochemicals of C. nodosa leaves may give desired pharmacological action. It shows hyperglycemic activity 7. Primary metabolites are of prime importance and essentially required for growth of plants for example; sugar, protein, lipids, starch. Many primary metabolites act as precursors of pharmacologically active metabolites. The present study deals with the study of primary metabolites present in Cassia nodosa.

Collection of Plant Material: Plant material was collected from the hills of Amer, Jaipur. It was then authenticated by Herbarium, Department of Botany, Rajasthan University, Jaipur, Rajasthan, India.

Preparation of Extracts: The stem, leaves, flowers, pods and roots of Cassia nodosa was properly washed under tap water, shade dried and powdered. The resultant was then subjected for successive extraction with petroleum ether, benzene, chloroform, ethanol and water with soxhlet apparatus. The extracts were then concentrated in vacuum under reduced pressure using rotary flash evaporator and dried in desiccators. These extracts were then subjected to preliminary phytochemical screening for the detection of various plant constituents.

Each of these extracts was processed further to evaluate the presence of sugar, proteins, tannins, flavonoids, alkaloids, fats & oil and steroids following the established protocols. The powder was treated with acids like 1N HCl, H2SO4, HNO3, Acetic acid and alkaline solutions like 1N NaOH and ammonia. All the plant parts were then evaluated quantitatively to estimate the total levels of soluble sugars, starch, proteins, lipids, phenols, amino acid and ascorbic acid following the established methods for the sugars, starch 8, protein 9, lipids 10, phenols 11, amino acid 12, ascorbic acid 13. All experiments were repeated five times for precision and values were expressed in mean ± standard deviation in terms of air dried material. (Table 1)

RESULTS AND DISCUSSIONS: All the plant parts of Cassia nodosa were evaluated quantitatively for the analysis of total soluble sugars, starch, protein, phenol, lipid, amino acid and ascorbic acid. Plants are rich sources of high value metabolites like proteins, phenols, sugars, starch, lipids, amino acids and ascorbic acids which are directly involved in the normal growth, development and reproduction and are useful in flavoring, fragrances, insecticides, sweeteners and natural dyes 14.

Starch is biodegradable and renewable in nature. They are increasingly being considered as an eco-friendly alternative to the use of synthetic additives in many other products, including plastics, detergents, pharmaceutical tablets, pesticides, cosmetics and even oil-drilling fluids 15. The highest amount of starch was observed in stems i.e. 10.5mg/gdw and minimum amount was observed in flowers i.e. 3.48mg/gdw (Fig. 1).

Quantitative estimation of sugar shows that content of sugar is highest in pods i.e. 10.3mg/gdw and minimum i.e. 2.45mg/gdw in roots (Fig. 2). Plant sugars can be used as artificial sweeteners and they can even help diabetics by supporting the body in its rebuilding 16.

The total levels of lipid were found to be higher in seed i.e. pods 44.6mg/gdw and lowest in stems i.e. 3.07mg/gdw (Fig. 3). The higher amount of plant lipid can be used as essential oils, spice oleoresins and natural food colors. With a strong foundation in research and development, plant lipids have developed products that work with diverse requirements, be it culinary, medicinal or cosmetic 17.

Ascorbic acid (vitamin C) is a familiar molecule because of its dietary significance, most aspects of its metabolism and some aspects 18. Total levels of ascorbic acid were found to be highest in leaves i.e. 0.764mg/gdw and minimum in roots i.e. 0.04mg/gdw (Fig. 4).

Proteins are the primary components of living things. The presence of higher protein level in the plant points towards their possible increase food value or that a protein base bioactive compound could also be isolated in future 19. Total levels of protein were found to be highest in leaves i.e. 116.00mg/gdw and lowest in flowers i.e. 34.38mg/gdw (Fig. 5)

Total levels of phenols were found to be highest in pods i.e. 22.0mg/gdw and lowest in stems i.e. 3.84mg/gdw (Fig. 6). The higher amount of phenols is important in the regulation of plant growth, development and diseases resistance. It can be used as fungicide, pesticides, an antiseptic, disinfectant and in the manufacture of resins, explosives, plastics, detergents and pharmaceutical substances.

Total levels of DNA and RNA were found to be highest in leaves i.e. 14.32mg/gdw & 6.32mg/gdw respectively minimum in roots i.e. 2.86mg/gdw & 0.46mg/gdw respectively (Fig. 7 and 8). The DNA is the biological molecule that stores all the genetic information. Everything that the cells has to do, at what time in its life cycle, and how it has to do it is determined by the information contained in the DNA molecule.

Total levels of chlorophyll a+b and carotenoids were found to be highest in leaves i.e. 0.211mg/gdw & 1.116mg/gdw respectively minimum in roots i.e. 0.0mg/gdw & 0.34mg/gdw respectively (Fig. 9 and 10). One of the most important process of plants i.e photosynthesis deapendent upon the light capturing capacity of these pigments. 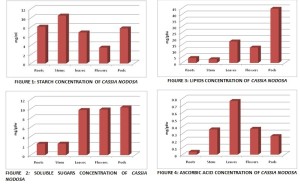 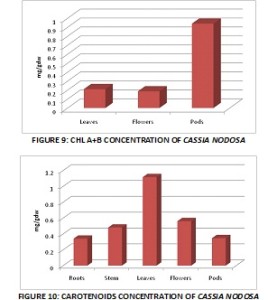