ABSTRACT: Ethnic peoples from Purulia district of West Bengal in India use a lot of plants for their primary health care without studying phytochemical analysis and biological activities in detail. Main objectives of the present study are to evaluate the antibacterial and antioxidant activities of the whole plant extract of Curculigo orchioides using polar and nonpolar solvents. Total phenol content (TPC) was determined by Folin-Ciocalteu assay using Gallic acid (GA) as standard and total flavonoid content (TFC) by AlCl3 method using quercetin as standard. The antibacterial screening was carried out by agar well diffusion method. Methanol extracts exhibit higher phenol (82.93 ± 2.74 mg of GA E/gm of the sample), flavonoid (48.41 ± 1.94 mg of QE/gm of the sample) and alkaloid (5.56 ± 1.56%) content in comparison to other solvents. Similarly, methanol extracts show higher free radicals scavenging property and there was a positive correlation between IC50 values with total phenol and flavonoid content. A positive correlation exists in total phenol and flavonoid with antioxidant activities. The plant contains high phenolic and flavonoid content and exhibits antibacterial and antioxidant activities support the ethnomedicinal value of the plant.

INTRODUCTION: Plants have been used medicinally since prehistoric times. Although, after the discovery of the synthetic drug, the use of natural medicines has decreased drastically. However, synthetic drugs have some side effects 1, allergic reactions 2. So, humans seek some alternative source of medicine. Tribals from a rural area of Purulia district are mainly dependent on medicinal plants for their primary health care. One such traditionally used plant is Curculigo orchioides Gaertn. (Hypoxidaceae) commonly known as kalimusli, known in Purulia it as talmuli, is an important endangered medicinal plant used by the tribal people from all over the district for the treatment of carbuncle and cancer.

The plant is a small annual herb characterized by the yellowish flower, blackish tuberous primary root with dense lateral roots, aerial part possessing numerous linear leaves arranged in rosettes. According to WHO 80% world population relies on traditional medicines for the treatment of common illness 3. At present, phytochemicals are more in demand in comparison to synthetic drugs due to its fewer side effects, lesser immuno-suppressive activity and wide use for the treatment of several diseases 4. The rhizome of C. orchioides possesses immune stimulant potential 5, hepatoprotective 6, antioxidant 7, and platelet regeneration effect 8. The present study emphasizes on antibacterial activity against three strains of bacteria, antioxidant activity, total phenol and flavonoid content of the whole plant of Curculigo orchioides.

Plant Materials: Plant Fig. 1 is obtained from the forest area of Bandwan in Purulia district, West Bengal, India and is identified with the help of books and literature, authenticated by Dr. Basanta Kumar Sing, Botanical Survey of India, Kolkata. A voucher specimen (AMC123) was documented in the herbarium of A.M. College, Jhalda. 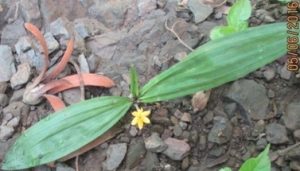 Extract Preparation for Total Phenol, Flavonoid, Alkaloid, Antioxidant and Antibacterial Activities: Freshly collected whole plant of Curculigo orchioides (1800 grams) was washed with running tap water and then shade dried for eleven days. Dried plants crushed to form a powder (780 grams) and extracted successively with soxhlet extractor at 60 ºC by using methanol, ethyl acetate, n-hexane and water for 24 h. After that solvent extracts are removed, filtered and concentrated by using a rotary evaporator at 60 ºC under reduced pressure and 14 gm, 9 gm, 5 gm and 10 gm of the extract obtained respectively which were kept in a refrigerator at 4 ºC for further study.

Determination of Total Flavonoid Content: Total flavonoid content was determined by AlCl3 method using quercetin as standard 10. A mixture of 10% of 100 µl of AlCl3, 100 µl NaNO3(5%), 670 µl of 1 mM NaOH and 100 µl of the sample was vortexed and incubated in the dark at room temperature for 25 min. The O.D. value was measured at 510 nm. The experiment was repeated thrice.

Estimation of Alkaloid Content: Alkaloid content was determined by using a suitable method with slight modification 11. Five grams of the powdered methanol and aqueous plant extracts dissolved in 20 ml of 20% acetic acid prepared in methanol (v/v), then filtered after four hours. The filtrates were kept in a water bath for 30 min at boiling temperature. Ammonium hydroxide was poured into the extract, dropwise and produced some precipitation (ppt). The collected ppt was washed with dilute ammonium hydroxide and filtered. The residues obtained in the filter paper, dried and weighed.

ABTS•+ Antioxidant Activity: For ABTS•+ antioxidant assay, the method of Re et al., 13 was followed with slight modification. The ABTS•+ radical cation was prepared by mixing an equal volume of 7 mM of ABTS•+ stock solution with 2.45 mM of potassium persulfate and incubated in dark condition for 12-16 h at room temperature. Before experimental processing, the ABTS•+ radical reaction mixture was diluted with ethanol to an absorbance of 0.700 ± 0.05 at 734 nm. The requisite amount of plant extract (50-400 µg/ml) was mixed with 2 ml of ABTS•+ radical reaction mixture and incubated in the dark for 6 min. After that absorbance at 734 was recorded by UV-Vis spectrophotometer and percent free radical scavenging activity was determined by the following formula

Where Asample and A blanks are the respective absorbance’s of tested samples and ABTS•+ reaction mixture.

Well Diffusion Method: The good diffusion method was used to study the antibacterial activity as described by Bauer et al. 15 Lawn bacterial cultures were spread on the Muller Hinton agar using a spreader. The wells were cut on the agar plates using a cork borer; plant extracts were poured into the well using sterile micropipette 16. The plates were incubated at 37 ºC for 24 h. After incubation, the diameter of the zone of inhibition was measured by using a scale.

Total Phenol Content: Due to the presence of hydroxyl groups phenolic compounds are very important in plants as they can scavenge free radicals. TPC of C. orchioides was solvent dependent and expressed as milligrams of GA equivalent. Fig. 2 summarize the TPC and ranging from 35.7 ± 3.32 to 82.93 ± 2.74. The methanol extract exhibited the highest total phenol content in comparison to other solvent extracts.

Total Flavonoid Content: Total flavonoid content also depend upon the solvent types as shown in Fig. 2 varied from 12.46 ± 2.08 to 48.47 ± 1.94 mg of quercetin equivalent/gm of extract. The methanol extract showed the highest amount of flavonoid content Fig. 2 followed by aqueous, ethyl acetate and n-hexane. 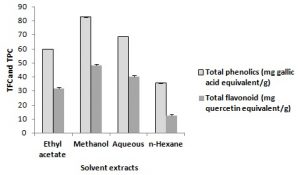 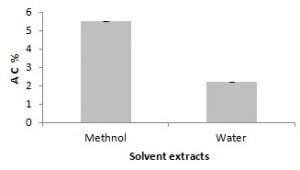 DPPH Radical Scavenging Activity: Antioxidants present in the plant extracts decrease the absorbance of DPPH radical at 517 nm because of the reaction between antioxidants and radicals. It is noticeable by seeing the color changes from purple to yellow.

The scavenging effects of various solvent extract on DPPH radical Fig. 4 shown in the following order: methanol > aqueous > ethyl acetate > n-hexane. The IC50 value was shown in Table 1. Though the capability of scavenging the free radicals is very low in comparison with vit - C but plants have the potentiality to scavenge the free radicals and may be used as natural antioxidants.

IC50 Value: Inhibitory concentration (IC50) parameter was used for the interpretation of the results of antioxidant activities. The discoloration of the sample was plotted against sample concentration to determine the IC50 value. Its value in four solvents extracts shown in Table 1 by using three different assay techniques.

DISCUSSION: Studies have revealed that medicinal plants are very good sources of antioxidant and play a significant role in the treatment of several diseases globally 17. The plant C. orchioides contains a higher amount of phenolic compounds in the methanolic extract in comparison to other solvent extracts. Due to the presence of phenolic compounds plant exhibit antioxidant properties and methanolic extract shows more potential on free radical scavenging properties 18. There was a positive correlation between phenolic compounds and IC50 values; this study corroborates the findings of previous authors 19, 20. The phenolics and polyphenols are the largest groups of secondary metabolites to have antimicrobial and antioxidant properties 21, 22.

Naturally occurring plant flavonoids possess antimicrobial activities 23, 24. The variation in the antibacterial activity of flavonoids and phenolics is due to the number and positions of methoxy and phenolic groups within their structures 25, 26. The alkaloid extracts obtained from medicinal plant species have a multiplicity of host-mediated biological activities, including antimalarial, anti-microbial, antihyperglycemic, anti-inflammatory, and pharmacological effects 27, 28. With respect to different liver marker enzymes, such as aspartate aminotransferase (AST), alanine aminotransferase (ALT) and alkaline phosphatase (ALP) methanol extract of C. orchioides exhibit hepatoprotective properties. Nagesh and Shanthamme 29 reported the antibacterial property of rhizome extract against pathogenic bacteria. Mehta et al., 30   identified some fatty acid from the root of C orchioides. Anticancer phenolic compound curculigoside identified by Kubo et al., 31 from the rhizome of the plant. Whole plant extract and uses of different solvents vary the biological activities as reported by previous authors.

Further study on phytochemical analysis and isolation of bioactive components urgently needed for the development of natural medicine.

CONCLUSION: Due to the presence of secondary metabolites (Phenolic and flavonoid compounds) the studied plant exhibits antioxidant and antibacterial properties. Out of the four solvents used methanol has the more potential to extract the bioactive components from plant powder. This study supports the ethnomedicinal uses of the plant in Purulia district. Further research on phytochemical analysis and isolation of bioactive components urgently needed for the development of natural medicine.

ACKNOWLEDGEMENT: UGC, Government of India is acknowledged for financial assistance (Project no. F.PSW-204/15-16/ERO). We are indebted to the tribal people of Purulia who helped us a lot to give the manuscript a full shape. GM, the first author is grateful to the Principal, A. M. College, Purulia for giving permission for fieldwork.

CONFLICT OF INTEREST: No conflicts of interest.