BIOEFFICACY OF PREMNA CORYMBOSA ROTTL. (VERBANACEAE) WITH SPECIAL REFERENCE TO ITS ANTIOXIDANT ACTIVITY

BIOEFFICACY OF PREMNA CORYMBOSA ROTTL. (VERBENACEAE) WITH SPECIAL REFERENCE TO ITS ANTIOXIDANT ACTIVITY

ABSTRACT: In the present investigation, the bioefficacy of an indigenous plant was investigated with special reference to its antioxidant potential. Antioxidant effects of Methanolic, Chloroform and Ethyl acetate extracts of the leaves of Premna corymbosa Rottl. (family Verbenaceae) were tested based on DPPH (1, 1-diphenyl-2-picryl-hydrazyl), phosphomolybdenium assay, superoxide radical scavenging activity, and metal chelating activity. Results about the present investigation indicate that the methanol extract of the P. corymbosa showed strong antioxidant activities than the other solvent extracts. This study has made it clear that Premna corymbosa is an effective antioxidant. Such extracts could be more widely used in developing countries for the prevention and treatment of cancer. These extracts may be considered as good sources for drug discovery.

Obtained from several aromatic plants possess strong antioxidant properties. Today there are at least 120 distinct chemical substances derived from plants that are considered as important drugs currently in use in one or more countries in the world. Several of the drugs sold today are simple synthetic modifications or copies of the naturally obtained substances.

Many European countries, including Germany, regulate herbal products as drugs and pharmaceutical companies, prepare plant-based drugs simply by extracting out the active chemicals from the plants (e.g., cynarin, silymarin). Plants have evolved the ability to synthesize chemical compounds that help them defend against attack from a wide variety of predators such as insects, fungi and herbivorous mammals. By chance, some of these compounds, while being toxic to plant predators, turn out to have beneficial effects when used to treat human diseases. Such secondary metabolites are highly varied in the structure; many are aromatic substances, most of which are phenols or their oxygen-substituted derivatives.

MATERIALS AND METHODS: General laboratory techniques recommended by Purvis et al., 10 was followed for the preparation of media, inoculation, and maintenance of cultures. The leaves were carefully washed with tap water, rinsed with distilled water, and air-dried for 1 h.

Then leaves are separated & dried in room temperature for one week. Then they were ground into a powder and stored in room temperature. Direct extraction with chloroform, ethyl acetate, and methanol was done following the method described by Eloff 11. In this method, finely ground plant material was extracted with chloroform, ethyl acetate, and methanol in the ratio of 1:10 in the conical flask in shaking condition for overnight.

The extract was filtered through the Whatman no. 1 filter paper in a separate container. The process was repeated 3 times and the same plant material but using fresh solvent. The solvent was removed by placing the extracts in the distillation unit in the respective temperature. The extracted residues were weighed and re-dissolved in different solvents to yield 10 mg/mL solutions ready for further analysis.

DPPH Assay (2, 2-diphenyl-1-picrylhydrazyl): The Radical Scavenging Activity of different extracts was determined by the method proposed by Chang 12 but with a small modification. The decrease of the absorption at 517nm of the DPPH solution after the addition of the antioxidant was measured in a cuvette containing 2960μl of 0.1mM ethanolic DPPH solution was mixed with 40μl of 20 to 200 μg/mL of plant extract and vortexed thoroughly. The setup was left at dark in room temperature and the absorption was monitored after 20minutes. Ascorbic acid and Butylated hydroxytoluene (BHT) were used as references. The ability of the plant extract to scavenge DPPH radical was calculated by the following equation:

Phosphomolymbdenium Assay: The antioxidant activity of samples was evaluated by the green phosphomolybdenum complex formation 13. An aliquot of 100μl of sample solution was combined with 1ml of reagent solution (0.6M sulphuric acid, 28mM sodium phosphate, and 4mM ammonium molybdate) in a 4ml vial. The vials were capped and incubated in a water bath at 95°C for 90 min. After the samples had cooled to room temperature, the absorbance of the mixture was measured at 695 nm against a blank. The results reported (Ascorbic acid equivalent antioxidant activity) are mean values expressed as g of ascorbic acid equivalents / 100g extract.  Superoxide anion radical scavenging activity was studied 14. Hydroxyl radical scavenging activity of methanol extract of P. corymbosa on hydroxyl radical was measured. The chelating of ferrous ions by methanol extract of P. corymbosa was estimated 15. 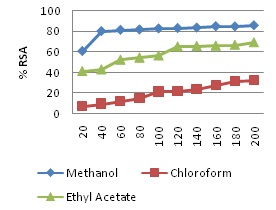 Table 2 shows the combined effect of the methanolic extract of P. corymbosa against Phosphomolybdenium Assay (PMA), Superoxide Radical Scavenging Activity (SOD), and Metal Chelating Activity (MCA). The extract has scavenged the free radicals in all the three assays. The % RSA was more for the test when compared to the standard and the control for Phosphomolybdenium Assay. This shows the reduction of phosphomolybdic acid to phosphomolybdenum blue complex by sodium sulfide. The obtained phosphomolybdenum blue complex was oxidized by the addition of nitrite, and this caused a reduction in the intensity of the blue color. The methanolic extract of P.corymbosa has reacted with the hydrogen peroxide produced in Super Oxide Radical Scavenging Activity and has eliminated it, which reflects in the O.D. Value. Thus, it eliminates the free radical and makes it unavailable, which can lead to cellular damage and apoptosis. 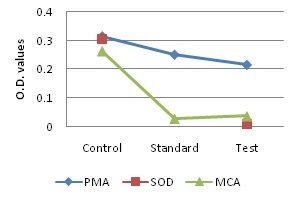 The antioxidants present in plant extract forms a coordinate complex with the metal ions (chelating activity) and inhibit the transfer of electrons. Thus oxidation reaction is arrested, and no free radicals are produced. The results obtained shows that the ferrous ions have been chelated by the methanolic extract of the plant. Thus, a color change has occurred when compared to the control and a decrease in O.D. Value. Similarly, Fig. 2 shows the free radical scavenging activity of the plant extract when compared to the control and standard. 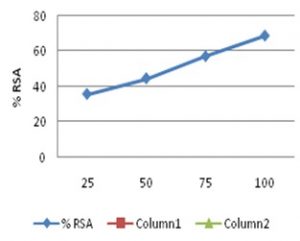 Nature has provided an excellent storehouse of remedies to cure all the ailments of mankind. In ancient days, almost all the medicines used were from natural sources, particularly from plants. Plants continue to be an important source of new drugs even today. The importance of botanical, chemical, and pharmacological evaluation of plant-derived agents used in the treatment of human ailments has been increasingly recognized in the last decades. Herbal remedies are widely used for the treatment and prevention of various diseases and often contain a highly active multitude of chemical compounds. Modern research is now focusing greater attention on the generation of scientific validation of herbal drugs based on their folklore claim. In this modern era, a large Indian population still relies on the traditional system of medicine, which is mostly plant-based.

Plants have played a significant role in the treatment of cancer and infectious diseases for the last four decades. Natural products have been rediscovered as important tools for drug development despite advances in combinatorial chemistry. This study has made it clear that Premna corymbosa might provide effective anti oxidant and anti-cancer therapeutic. Such extracts should be more widely used in developing countries for the prevention and treatment of dangerous diseases like cancer. These extracts should be considered as good sources for drug discovery.

On the other hand, without more supporting evidence, the notion that the antioxidant capacity of plant-based foods can directly determine the therapeutic utility of these foods in cancer treatment should be observed with some caution. The exact mechanism behind the observed antitumor effects of Premna corymbosa is still under exploration. Many studies suggest that there are additional functions responsible for the antitumor activity produced by this family of plants that go beyond their antioxidant capacity 16.

Extensive molecular and metabolic studies are needed to identify these other pathways. Even though studying whole foods provides a more normal way for the provision of food components and phytochemicals, it is still much simpler than the real human diet. This present investigation provides first-hand report on the selected plant species.

CONCLUSION: The screening of plant extract using the DPPH free radical method proved to be effective for the selection of plants that could have antioxidant activity. The present study revealed that the leaves of P. corymbosa are an effective potential source of natural antioxidants. Further, more detailed studies on the chemical composition of the extracts, as well as studies with other models, such as lipid peroxidation and in vivo assays may lead to the development of a potential drug from P. corymbosa.