The study was designed to determine the relative bioavailability of two sustained release Fixed dose combination (FDC) products of two manufacturers containing Lornoxicam [CAS No. 70374-39-9] 8mg and Thiocolchicoside [CAS No. 602-41-5] 8mg in 24 healthy male volunteers. The pharmacokinetics of Lornoxicam and Thiocolchicoside individually after oral administration of tablet formulation has been extensively evaluated in adult volunteers. However, no published data are available regarding the combined pharmacokinetics and bioavailability of this particular fixed dose combination. The clinical study was randomized, balanced, open-label, 2-period cross-over study. Each subject was randomized at the beginning of the study to receive either a single dose of test fixed dose combination or reference fixed dose combination during Period I. Following a 7-day wash out period, all subjects received the alternate formulation during Period II. No statistically significant differences were obtained between the two products with respect to the mean concentration-time profiles or in the pharmacokinetic parameters, including area under the serum concentration-time curve from the present study. The relative extent of absorption as assessed by the AUC ratio (Test/Reference) and Cmax, the average value was found to be 1.00±0.09 with 90% confidence limits (C.L.) of 0.82-1.18. Thus, these findings clearly indicate that the two products are bioequivalent in terms of rate and extent of drug absorption. Both the preparation was well tolerated with no adverse reactions throughout the study.

INTRODUCTION: Muscle and joint pain is a common complaint in individuals whose jobs require repetitive isometric maneuvers or awkward body positions. Such pain has been reported in individuals with various occupations such as bus drivers, unskilled laborers, musicians, physical therapists, and computer keyboard operators.Recently, ergonomic mechanisms related to the development of work-related musculoskeletal disorders have drawn substantial interest.

The fixed drug combination of Lornoxicam [CAS No. 70374-39-9] 8mg and Thiocolchicoside [CAS No. 602-41-5] 8mg has been approved recently for the treatment of patients with acute painful musculoskeletal conditions.

The pharmacokinetics of Lornoxicam and Thiocolchicoside individually after oral administration of tablet formulation has been extensively evaluated in adult volunteers. However, no published data are available regarding the combined pharmacokinetics and bioavailability of this particular fixed dose combination. This paper describes the bioequivalence study of fixed dose combination product containing Lornoxicam and Thiocolchicoside using a simple, sensitive and reproducible validated method of analysis.

It is available in oral and parenteral formulations. Thiocolchicoside is a synthetic sulphur derivative of colchicoside, a naturally occurring glucoside contained in the Colchicum autumnale plant 3. It is a muscle relaxant with anti-inflammatory and analgesic effects. Thiocolchicoside has a selective affinity for γ-amino- butyric acid (GABA) receptors and acts on the muscular contracture by activating the GABA-nergic inhibitory pathways thereby acting as a potent muscle relaxant 3, 4. According to literature, thiocolchicoside is absorbed rapidly from the gastrointestinal tract, after oral administration and peak plasma concentrations are observed within approximately 1 h 3.

The pharmacokinetics of Lornoxicam and Thiocolchicoside individually after oral administration of tablet formulation has been extensively evaluated in adult volunteers. However, no published data are available regarding the combined pharmacokinetics and bioavailability of this particular fixed dose combination. This paper describes the bioequivalence study of fixed dose combination product containing Lornoxicam and Thiocolchicoside using a simple, sensitive and reproducible validated LCMS/MS method.

Lornoxicam is a yellow crystalline substance with a pKa of 4.7 and a partition coefficient of 1.8 determined in octanol-phosphate buffer pH 7.4. It belongs to the chemical class of the oxicams like piroxicam, tenoxicam and meloxicam. It is more potent than other oxicams, clinically single doses of 4 or 8 mg are used. It is used for inflammatory disease of the joints, osteoarthritis, pain following surgery and pain in the lower back and hip which travels down the back of the thigh into the leg (sciatica). It works by blocking the action of cyclooxygenase, an enzyme involved in the production of chemicals, including some prostaglandins, in the body. LXM differs from other oxicam compounds in its potent inhibition of prostaglandin biosynthesis, a property that explains the particularly pronounced efficacy of the drug. All NSAIDs reduce inﬂammation caused by the body’s own immune system and are effective pain killers 5-9.

Thiocolchicoside is metabolized so rapidly after oral administration that it is impractical to determine concentrations in plasma over the periods generally used for bioequivalence studies. The aglycone, 3-desmethylthiocolchicine is the major metabolite and appears in plasma at concentrations which can be assayed over the required periods and therefore represents an appropriate surrogate analyte for the assessment of bioequivalence after oral administration of thiocolchicoside 10-13. We have used a highly specific and sensitive liquid chromatography–tandem mass spectrometry (LC-MS-MS) method which was developed and validated in our laboratory, for the determination of lornoxicam and thiocolchicoside in plasma. 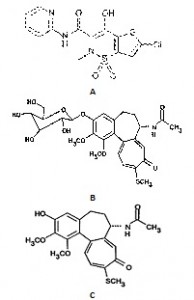 A combination formulation of Lornoxicam and Thiocolchicoside is beneficial in treatment of acute painful musculosketal conditions and also in terms of its convenience and patient compliance. Musculoskeletal pain can be caused by damage to bones, joints, muscles, tendons, ligaments, bursae, or nerves. Injuries are the most common cause. Pain is the chief symptom of most musculoskeletal disorders. The pain may be mild or severe, local or widespread (diffuse).

Although, pain may be acute and short-lived, as is the case with most injuries, pain may be ongoing with chronic illnesses, such as rheumatoid arthritis. Hence, Thiocolchicoside is co-administrated with Lornoxicam and this combination offers a significant benefit to persons requiring long term therapy, maximizing the benefits of their potency at the same time improving the quality of life. It is also necessary to confirm that the pharmacokinetics of the component drugs is compatible and that the bioavailability is not affected relative to concomitant administration of the two active agents.

Reference preparation: Lornoxicam 8mg and Thiocolchicoside 8mg was purchased from a local pharmacy.

Study design and subjects: The study was conducted in a single centre according to an open, randomized, two-period crossover design. The two dosing periods had duration of one day each and were separated by a wash-out phase of seven days. Prior to the study all subjects underwent a comprehensive medical examination. This comprised physical examination, medical history, laboratory investigation, drug screening, ECG and HIV/hepatitis testing. The Bioequivalence study was carried out on twenty four normal voluntary subjects aged between 20 and 32 years (mean 25.58 years), their weights varied from 53 to 70 kg (mean 58.83 kg), and height from 152 to 180 cm (mean 166.37 cm).

The study protocol was reviewed and approved by Drugs Control General of India (DCGI) and Institutional Ethical Committee of Jadavpur University and each subject gave a written informed consent prior to participating in the study. The study was a single dose, fasting two periods, two way crossover studies with a wash out period of one week. All the volunteers assembled in Clinical Pharmacology Unit (CPU) ward at 6.00 a.m. on the study day of each session, after overnight fasting of 10 hrs. Their total pulse rate and blood pressure were recorded. Each subject was randomized at the beginning of the study to receive either a single dose of test fixed dose combination or reference fixed dose combination during Period I. Following a 7-day wash out period, all subjects received the alternate formulation during Period II.

The subjects were fasted for 10 hours before dosing and until 4-hr post dose blood collection. Water was not allowed for one hour prior to dosing and until one hour after dosing except for the 240 ml of water administered with the study medication. A series of blood samples were collected prior to and following administration of the drug during Periods 1 and 2.

Sample preparation: 0.05ml of Internal standard (Aceclofenac -CAS no. 89796-99-6) was added to 0.5 ml of plasma and mixed well for 30 seconds. 200 µl of 10% Tris Buffer (10 mM) was then added and sonicated for 1 min. This mixture was extracted with 5 ml of Ethyl acetate followed by shaking for 10 mins and then centrifuged for 5 mins. The organic layer was removed in a separate centrifuge tube. 4 ml of the resulting organic layer was evaporated to dryness (in low temp.) in presence of nitrogen atmosphere. The residue was reconstituted with 200 µl of diluent (methanolic soln. of 2.5 % Tris Buffer) and the same was injected for chromatographic analysis.

Analytical determinations: All the chemicals and reagents used in the analysis were of HPLC grade. The determination of Lornoxicam and 3DMT serum concentrations was performed by API 2000 LC-MS/MS (Applied Biosystems, USA), using a validated LCMS/MS method with UV detection. The LCMS/MS system consisted of a Shimadzu (Prominence model) liquid chromatography, equipped with SPD 20A UV/Vis detector, LC 20AT pump, SIL 20AC auto-sampler, CTO 10 AS VP column oven was coupled with API 2000 LC-MS/MS.

The chromatography was on Peerless Basic CN (33 x 4.6 mm, 5µ particle size) at 30°C temperature. The software employed was Analyst version 1.4.1. The mobile phase composition was Methanol and 10 mM Ammonium formate pH 5.5 (90:10 v/v) which was pumped at flow rate of 0.5 ml / minute. The method was validated for linearity, range, accuracy, precision and system suitability parameters as per the following guidelines 14. 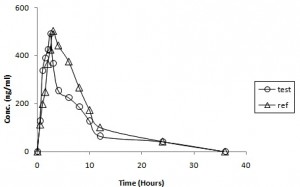 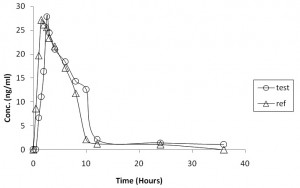 Cmax and tmax were determined as the highest observed concentration and the time to reach the maximum concentrations, respectively. The elimination half life (t1/2) was calculated from the slope of the terminal log linear phase.

An analysis of variance (ANOVA) was performed on the pharmacokinetic parameters Cmax and AUC0-∞ using general linear model (GLM) procedures, in which sources of variation were subject, treatment and period. The 90% confidence intervals of the Test/Reference ratios for Cmax and AUC0-∞ (log transformed) were determined. Bioequivalence between two formulations can be concluded when the 90% confidence intervals for these pharmacokinetic parameters of two products are found to be within the acceptable range of 80 – 125%.

RESULTS AND DISCUSSION: The described analytical method used for measurement of Lornoxicam and 3DMT was shown to be accurate and sensitive. An internal standard was used in the study and the run time was 6 min.

The elimination half life of Lornoxicam was in the range 5 - 6 hrs and that of was in the range of 4-4.5 hrs. Thus the washout period of one week was sufficient due to the fact that no sample prior to administration in phase 2 showed any level of the two drugs.

ANOVA (Subject, period, treatment) was applied to the Cmax, ln Cmax, AUC0-24, ln AUC0-24, AUC0-∞ and ln AUC0-∞ values. There was no statistically significant difference for the treatment values. The pharmacokinetic parameters of the test were comparable with that of the reference. None of the volunteers complained of any adverse reaction during the study periods. The 90% confidence interval for Cmax, AUC0-24 and AUC0-∞ values are summarized in Table 3.

TABLE 3: THE 90% CONFIDENCE INTERVAL OF TEST AND REFERENCE PREPARATION FOR LOG TRANSFORMED DATA FOR LORNOXICAM AND 3DMT

The aim of the bioequivalence trials is to assure interchangeability between an innovator and a generic formula in terms of efficacy and safety. When a pharmacological effect is difficult to measure, the plasma levels of drug may be used as an indirect indicator of clinical activity.

Therefore, the Lornoxicam and 3DMT plasma levels obtained in this study suggest an equal clinical efficacy of the two brands tested and provide pharmacokinetic data from an Indian population.

Bioequivalence of the test preparation and the reference preparation could be demonstrated with respect to all tested pharmacokinetic parameters. Moreover, both the formulations were safe and well tolerated as no volunteer reported any adverse reaction and there were no dropouts in the study.

ACKNOWLEDGEMENTS: The authors are thankful to DST under Women Scientist Scheme New Delhi A (WOS-A) [SR/WOS-A/LS-136/2008] and Cosmas Pharmacls for the financial support provided by them for carrying out this study.