The leaf extracts of Lantana camara in different organic solvents (methanol, acetone, ethanol and aqueous) were assessed in-vitro for fungitoxic activity against phytopathogenic Alternaria alternata isolated from potato (Solanum tuberosum) and tomato (Lycopersicon esculentum). The assessment of fungitoxicity was carried out by food poison technique1 using four different extracts at 200 mg/ml and their activity was recorded as radial growth and percentage inhibition. Among the four extracts, ethanol and acetone extracts showed complete inhibition of growth of fungus; while methanol extract showed 50% inhibition and aqueous extract did not produce any inhibition of fungus. Findings from present study confirmed that ethanol and acetone extract of Lantana camara can be used as biofungicide to control this phytopathogenic fungus.

INTRODUCTION: Fungi rank second only to insects as a cause of plant diseases which results in heavy loss of plant products. It can cause nearly 20% reductions in yield of major food and cash crops 2. Alternaria genus is cosmopolitan in occurrence. The members of this species like A. alternata, A. solani, A. porri, A. dauci, A. helianthi, A. carthami, and A. macrospore cause different disease in their respective host 3. Alternaira alternata is usually reported as a weak pathogen, but it can sometimes attack the plant vigorously and can cause economic losses 4.

Alternaria solani causing early blight of potato (Solanum tuberosum) and tomato (Lycopersicon esculentum) is the most destructive 5. In order to prevent the plant diseases and to protect the crop plants and other plants against pathogens, chemical control methods are in practice. No doubt the use of chemicals has been found very effective in controlling plant fungal diseases but some major problems threaten to limit the continued use of fungicides. Firstly, some fungi have developed resistance to chemicals. This necessitates higher dosage the development of new chemicals to replace those to which fungi are resistant. Secondly some fungicides are not readily biodegradable and tend to persist for years in the environment, which also pollute soil and water, and this leads to third problem, the detrimental effect of chemicals on organisms other then target fungi 6.

So, In order to avoid the hazardous effects of chemicals natural products of some plants have been used to control plant diseases 7, 8, 9 which are able to produce antifungal substances 10. Biological screening of plant extracts is carried out throughout the world for the determination of their antifungal activity. Many higher plants and their constituents have been successful in plant disease control and proved to be safe and non-phytotoxic 11.

Scientists are involved in finding the cheaper and more environmentally friendly bio-compounds for control of plant diseases using diffusates formed by different plants 12, 13, 14.

Fungicides of plant origin are environmentally safe and non phytotoxic. The extracts of these plant materials can easily be prepared by farmers 15. Therefore, the development of biopesticides has been focused as a viable pest control strategy in recent years. The major characteristics of such biopesticides are that they should have minimal toxic effect to human and other organism, rapid degradation and often a narrow spectrum of the activity 16. There will be great advantage if the antifungal property resides in weeds. So, for the present study Lantana camara, a weed has been used.

The aim and objective of the present study were to evaluate the antifungal potential of different extract of leaves of Lantana camara to control the phytopathogenic fungi, Alternaria spp. isolated from solanaceae family.

Collection of plant parts: Fresh and healthy leaves of Lantana camara were collected from different localities of Haridwar (Uttarakhand, India). These collected leaves were thoroughly washed, shade dried and converted into powdered form by the use of mixer grinder.

Preparation of plant extract: For the preparation of plant extract the concentration which was selected was 200 mg/ml, so 20 gm leaf powder were mixed with 100 ml of respective solvents (methanol, acetone, ethanol and aqueous). The extraction was carried out by soxhlet extraction method and followed by filtering using Whatman’s filter paper No. 1. After filteration it was evaporated until 1/5th of the total volume remained and the final content was stored at 4°c for further use in airtight bottles.

Isolation of Test Fungus: Alternaria alternata were isolated from the infected leaves of potato (Solanum tuberosum) and tomato (Lycospersicon esculentum). The media used was Potato Dextrose agar (PDA). The pure culture of fungus was maintained on PDA at 27±2°C.

Autoclaved media was transferred into petriplates aseptically. After solidification of media, they were inoculated with 3 mm inoculum plug of the 7 days old culture of test fungus and incubated at 27±2°C for 7 days. After the period of incubation the radial diameter was measured in mm. Petriplates without the test extracts but with same amount of sterilized water served as negative control while the petriplate along with antifungal griseofulvin (5 mg/ml) served as positive control. Radial mycelium growth on different extracts was transformed into inhibition percentage by using the following formula18.

The experiment were carried out in triplicates. The result presented in table 1 are based on the mean values of all replications.

From the above experimental results, it is found that the antifungal activities of ethanolic and acetonic extract of leaf powder of Lantana camara were significantly active against the tested organism, while the methanolic extract gave lower antifungal activity and aqueous extract does not gave any activity against tested organism. There are some articles indicating more effectiveness of plant extracts performed with pure solvents such as ethanol in comparison with aqueous extracts, for instance Hassanien et al., (2008) screened ethanol, ethyl acetate extracts and aqueous extracts of neem and chinaberry against two fungal pathogens and found that ethanol and ethyl acetate extracts of these plants suppressed the growth of F. oxysporum and A. solani in comparison to aqueous extracts which were less effective 19. In connection Shirzadin et al., (2009) compared antifungal properties of ethanol, petroleum ether and water extracts of some plants against some pathogenic fungal pathogens including Alternaria alternate and found highest antifungal activity in ethanolic extract 20.

On the basis of the data obtained in the present investigation, conclusion may be drawn that the ethanolic and acetonic extracts of leaf powder of Lantana camara can be used as as noval fungicide against Alternaria spp. but for large scale use further identification of the active ingredients of these extracts would be useful for laboratory synthesis and commercial production of biofungicides.

* Values are the average of three replicates, **  Synthetic antifungal agent, - No inhibition 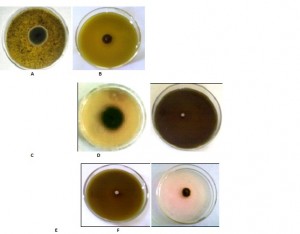 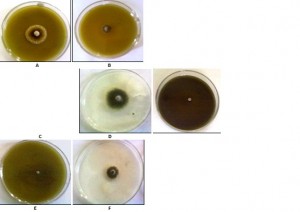 AKNOWLEDGEMENT: The authors are thankful to the Department of Microbiology, Kanya Gurukul Girls campus for providing infrastructure and other facilities and along with that also thankful to the library, Gurukul Kangri University, Haridwar for reference of literature.