Categories Menu
Home » BIOGENIC SYNTHESIS OF MYCONANOPARTICLES FROM MUSHROOM EXTRACTS AND ITS MEDICAL APPLICATIONS: A REVIEW

BIOGENIC SYNTHESIS OF MYCONANOPARTICLES FROM MUSHROOM EXTRACTS AND ITS MEDICAL APPLICATIONS: A REVIEW

BIOGENIC SYNTHESIS OF MYCONANOPARTICLES FROM MUSHROOM EXTRACTS AND ITS MEDICAL APPLICATIONS: A REVIEW

ABSTRACT: Mushroom extracts such as proteins, amino acids, polysaccharides and vitamins implicated as the reducing, stabilizing and capping agents in synthesis of myconanoparticles. Therefore, it is just a little attempt to study the journalism of this important of myconanoparticle. For this literature survey, basically library data was collected and digital resources were also included. From these sources we obtained reliable information about diverse nanoparticle synthesis from different mushroom species. Myconanotechnology is used in numerous medical applications like diagnosis of various diseases, therapeutic field and other applications like catalysis of bio molecules, microelectronics, biosensing devices, air and water purifiers and paints. Studies by different researchers specify that myconanoparticles possesses various pharma-cological activities such as antimicrobial activity, anticancer activity, anti-proliferative activity, and various other effects like antioxidant activity, cellular uptake, catalytic activity etc. There are many literatures demonstrating the various global uses of myconanoparticles. Till date very inadequate information is available from different sources so, we try to assemble this information in one review article. This review article gives an account of updated information on synthesis of various nanoparticles from different species of mushroom extracts and its optimal synthesizing factors and its medical significance.

INTRODUCTION: In latest years, nano-technology is the fast-growing modern science, which has blossomed the human beings in the field of medical, chemical and physical sciences. In this field, synthesis of nanoparticles with erratic size, shape, chemical composition and prohibited poly-dispersity. It has vigorously developed as an important field of modern research with probable effects in electronic and medicine 1.

Compared to the large particles of bulk materials nanoparticle has novel characteristics because it is tremendously small in size and large surface to volume ratio. Oyster mushroom is considered safe for most people to eat because it is grown in controlled, sterilized environments.

Medicinal mushrooms have been in use for thousands of years. However, it has been only recently that the medicinal values of mushrooms have started to flourish in the western world. Mushrooms are tremendously high in fiber and contain high levels of vitamins such as thiamine, riboflavin, niacin, biotin, ascorbic acid, cobalamins, and minerals like potassium and phosphorus. Recently, medicinal mushrooms have come beneath close examination as a “wonder drug” of the 21st century. There have been claims that mushrooms augment the immune system, inhibit the growth of tumors, and help in eliminating the body of cancer and pathogens. Most of the superior researches are mainly focused on metal nanoparticles synthesized from the mushroom. Recent researches are terminate that large production of nanoparticle is reachable in fungi when compared to bacteria, because it produces large amount of enzymes dependable for nanoparticle production 2 and also using of their extracts viz. proteins, amino acids, polysaccharides and vitamins plays an major role as tumbling, stabilizing and capping agents in the process of the nanoparticles 3.

Naturally and artificially producing mushroom indicates that it could be expensive sources of antioxidant, anti-inflammatory, antiviral, anti-bacterial, cardiovascular, hepatoprotective and hypotensive activities in biological system 4 sizes and shape of nanoparticles depends on the preparation temperature and type of mushroom extract. The synthesis of nanoparticles from edible mushroom must be non-toxic for producing drugs. Novel biomaterials were used to biosynthesize of newly metallic nanoparticles bio resources 5.

Nanoparticles of noble metals, viz. gold, silver, platinum, and zinc are widely applied in fast moving consumer goods such as toothpaste, soaps, detergents, shoes, cosmetic products and besides their applications in medical and pharmaceutical products. Synthesis of nanoparticles can be performed using several habitually used chemical and physical methods and using fungus Fusarium, Oxysporum, Verticillium sp. Nano-particles can be synthesized using an array of methods including physical, chemical, biological, and hybrid techniques 6, 7, 57 Fig. 1.

The present review emphasizes reported mushroom resources for the synthesis of different myco-nanoparticles because edible mushroom has various therapeutic compounds which of being exploited since ancient time as traditional medicine. Here biosynthesis of extra and intracellular synthesis of glyconanoparticles process has been reported 5.

MATERIALS AND METHODS: For this study, fundamentally library data was collected, and digital resources such as Google Scholar, Scopus, PubMed, and Research gate, etc. also helped for this literature survey method. Through different journals of synthesis of nanoparticles, books we could gain recent information to continue this work. From these resources, we have reviewed the various works related to synthesis of myco-nanoparticles by using different species of mushroom, mechanism of synthesis and effect of various factors on psychosynthesis of nanoparticles, which are given below.

Biosynthesis of Nobel Metal Nanoparticles by Mushroom: Recently, magnification of nano-particles synthesis in an ecological process is rising. Huang et al., reported that the nanoscience and technology field has numerous potential applications in many areas such as drug and gene delivery, diagnosis, tissue engineering, artificial implants, medical diagnostic and chemical, textile, materials industries 8. Maurya et al., reported that synthesis of nanoparticles might be moreover intracellular or extracellular and it’s also most favorite during downstream processing as it is cost effectual and less laborious during industrial applications. During nanoparticles synthesis, light plays a key role that the light-sensitive riboflavin presents in mushroom extract plays a major role in the decline process 9.

Mustafa Nadhim Owaid et al., reported that a broad variety of mushrooms consists of proteins and polysaccharides that have been utilized in both intracellular and extracellular gold and silver nanoparticles. It has been reported that using extracts of different mushroom species viz.

In this article reported that mycosynthesizes Au-NPs are spherical and triangular with a varying size of 10-50 nm 77. Philip et al., Navin Jain et al., and Gerike et al., reported that diverse sizes and shapes of Au-NPs lies in the varying temperature of the extract 31, 78, 79. In this article documented that synthesis of AuNPs by edible mushroom Pleurotus florida. The synthesized gold nanoparticles from mushroom showed anticancer activity beside human chronic myelogenous leukemia (K562), human cervix (HeLa), human lung carcinoma (A-549) and human adenocarcinoma mammary gland (MDA-MA) under in-vitro conditions. Syed et al., Ahmad et al., and Bhat et al., reported that mostly the glucan content of mushroom was responsible for the stability of synthesized AuNPs 80, 81, 75. Borovaya et al., reported that synthesis of gold nanoparticles using T. cordifolia mushroom is demonstrated by this article 82. Some other typical gold nanoparticles produced by microorganisms are summarized in Table 2.

Other Nanoparticles: Wong et al., Senapati et al., Wu et al., reported that synthesis of CdTe quantum dots by using fungi 32, 34, 83. Only two types of mushroom such as Coriolus versicolor and P. ostratus have been used to form CdS-NPs and were applied in the industrial field. Meng et al., reported that a solution of extracellular biomass of C. versicolor and cadmium sulfide was effectively used for the formation of NPs; Coriolus versicolor-CdS-NPs are 100-200 nm in size and have a spherical shape 84. Tiwari et al., reported that the species of P. ostratusit, Cd-NPs has been producing from intracellularly which have the size of 4-5 nm and spherical and used for diverse industrial applications 85.

TABLE 3: MYCOSYNTHESIS OF OTHER NANOPARTICLES

Effect of Various Method or Technique: There are various methods for synthesizing nanoparticles, ranging from physical techniques using mechanical procedures to chemical or biological protocols using various organic and inorganic chemicals and living organisms. Pennycook et al., and Narayanan et al., reported that when to evaluate biological methods with other methods, which has additional benefits and low drawbacks. Then biological methods for nanoparticles synthesis are ecological and more adequate than established methods 41, 42.

Effect of Pressure: Pressure is essential for the mycosynthesis of nanoparticles. Abhilash et al., reported that the shape and size of the biosynthesized nanoparticles would be exaggerated by pressure applied to the reaction medium 52. Tran et al., reported that the rate of diminution of metal ions using biological agents like mushroom extracts has been establishing to be much faster at ambient pressure conditions 53.

Effect of Other Factors: Park et al., reported that the porosity of the mycosynthesized nanoparticles was influenced their quality and application 61. Various living systems such as mushrooms are wealthy in secondary metabolites that act as reducing and stabilizing agents for the myco-synthesis of nanoparticles. Haverkamp et al., reported that the composition of theses metabolites varies depending on the type of different mushroom species and the procedure used for its extraction 62. Mohanpuria et al., reported that different species of mushroom have distinctive intracellular and extracellular enzymes in unreliable quantities that affect nanoparticle synthesis 63. Baker et al. reported that the choice of purification methods of mycosynthesized nano-particles could persuade their quantity and quality 38. 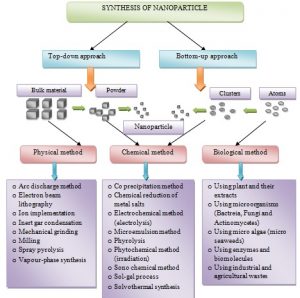 The Mechanism Behind Mycosynthesis: While various studies have been commenced on the screening and identification of mushroom species for controlled synthesis of noble metal nanoparticles, extremely little work has been performed to appreciate the genuine mechanism behind the synthesis of nanoparticles Fig. 2 64, 65, 66, 36. Pal Sovan Lal et al., reported that nanoparticles can be synthesized throughout two major methods, i.e., “top-down” and “bottom-up” approaches Fig. 1 67. 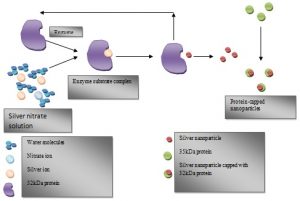 Juhi Saxena et al., reported that the top-down approach principally works with a bulk form of material, and their nanoscale of size will be achieved by physical method of size reduction, e.g., thermal decomposition, laser ablation, mechanical milling, etching, lithography, and sputtering 68. Rai et al., reported that the bottom-up approach is comprehensively used for the preparation of nanoparticles, where involving a homogeneous system wherein catalysts like biological extracts (e.g., reducing agent and enzymes) synthesize nanostructure that are forbidden by catalyst properties, reaction media, and circumstances (e.g., solvents, stabilizers, and temperature) 69.

Gade et al., reported that the biological synthesis of nanoparticles is more favored than physical and chemical means because of hasty synthesis, better control over size and shape characteristics, cost-effectiveness, less toxicity and ecological approach 70. Role of fungi such as mushroom is effective nanofactories is communicable consideration from the researchers worldwide. Mycosynthesis of nanoparticles has been well predictable because this totipotent eukaryotic microorganism has numerous incredible features which have been well documented. Gade et al., reported that various species of mushroom restrain different types of enzyme-like extracellular, intracellular enzymes and polysaccharides, etc., so which can be used to synthesize diverse nanoparticle synthesis. There are various reasons mushroom can be elected as superior nano-factories over bacteria and plants 70. Kashyap et al. reported that mushroom produces huge amounts of extracellular enzymes which catalyze the heavy metal ions and produce nanoparticles. It can produce nanoparticle at an earlier rate than chemical synthesis 71.

Namita Soni et al. reported that mushroom could produce nanoparticle extracellularly which is very appropriate for easier downstream processing and handling of biomass 72. Mushroom can produce nanoparticles together extracellularly as well as intracellularly. The accurate mechanism of mushroom is not understood entirely. Aromal et al., reported that putative mechanisms throughout intracellular synthesis comprise heavy metal binding to mushroom’s mycelia cell wall by proteins or enzymes present on it via electrostatic interactions. Moreover, the metal ions are reduced by enzymes present in the cell wall. This leads to aggregation of metal ions and configuration of nanoparticles 73. The different size, shape, and types of nanoparticles will be fashioned by different species of mushroom, which is mentioned in Table 1, 2 and 3.

A thorough understanding of biochemical mechanisms complicated in the fungi-mediated nanoparticle synthesis is a prerequisite to make this approach reasonably competitive with the conventional methods. Mycosynthesis of metallic nanoparticles (viz., Ag-NP, Au-NP, Se-NP, CdS-NP, Fe-NP, Pa-NP, and ZnS-NP) using mushrooms by different routes, and tested for 79% of biomedical and 21% of industrial applications. Mushroom metal-NPs were investigated for industrial applications such as for inorganic NPs, carbon nanotubes and treatment of waste as nano-biosorbents for adsorption of toxic metals for clearout our environment using ecological natural material and reducing environmental pollution in the future.