INTRODUCTION: The allopathic drugs are good in onset and have good therapeutic activity but side effects associated are poignant. Thus, the herbal medicines from natural sources with least or no side effect having similar or better therapeutic activity are best. The Nerium indicum is an evergreen shrub growing to 4m by 4m. It is in leaf all year, in flower from June to October. The flowers are hermaphrodite 1. The major components of it are oleander, neriin and oleandrin. The bark contains toxic glucosides, rosaginin and nerrin, volatile oil, fixed oil, etc 2. The leaves and the flowers are cardio-tonic, diaphoretic, diuretic, emetic and expectorant 3. Cardio tonic, leaves also used as cutaneous eruption to destroy maggots infesting wounds, for homeopathic medicine 4. The objective of over study is to determine the phenolic content, anti-oxidant (DPPH) activity of drug and also efficacy of this toxic shrub for analgesic activity by various models of it.

MATERIAL AND METHOD: The leaves of Nerium indicum were collected in the month of January-February and it was authenticated by Dr. D. A. Patil, Late Karmveer Dr. P.P. Ghogrey Science College, Dhule, Maharashtra. A voucher specimen is placed in the Department of Pahramcognosy, SVKM, NMiMS, SPTM, Shirpur Campus, Maharashtra. Methanol as solvent, Folin-Ciocalteu (Phenol) reagent, Gallic acid solution, Sodium carbonate and all other reagents of laboratory grade (for phytochemical investigation) were used.

The leaves 100 gm was extracted with methanol in soxhlet apparatus for 35 hours. The mixture was treated with 5% Lead acetate to remove tannins. Finally the extract was obtained and it was kept for evaporation on a water bath. The extract obtained was 6.26 g. The Preliminary Phytochemical Analysis was performed with extract.

Determination of Total Phenolic Content: Total phenolic content of Nerium indicum extract was measured by Folin-Ciocalteu reagent method. In this method, the blue colour was formed due to polyphenol present in the extract and was measured at 760 nm by using UV spectrophotometer and results were expressed as g/100g of gallic acid equivalent 5, 6.

The phenolic content with reference to gallic acid can be calculated by formula;

DPPH Scavenging Activity 7: The percentage radical scavenging activity was investigated using the method reported by (Chidambra, et al., 2002) [8]. 1 ml of extract solution from all concentration range was taken in vials. To this, 5ml of methanolic solution of DPPH was added, shaken well and the mixture was incubated at 370C for 20min. The absorbance was measured against methanol as a blank at 517nm. The absorbance of DPPH was taken as a control. The percent antiradical activity was calculated by using following formula.

Where, A Control = Control absorbance (DPPH).

The antioxidant activity of the extract was expressed as IC50 value was defined as concentration (in µg/ml) of extracts that inhibits the formation of DPPH radicals by 50%.

Determination of Analgesic Activity: An attempt was made to check the analgesic activity by Acetic acid induced Writhing, Tail-flick activity and Hot plate models in methanolic extract of leaves of Nerium indicum 9.

RESULTS: The Preliminary Phytochemical Analysis of methanolic extract of leaves of Nerium indicum showed the presence of alkaloids, tannins, phenols and starch. Total phenolic content was determined by Folin Ciocatteu’s Method and was found to be 55.20μg/10 mL. 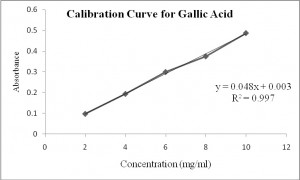 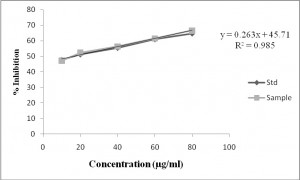 Acetic acid induced Writhing: Group wise the animals received dose of methanolic extract of drug i.p. (50mg/kg). Control group received 1% v/v acetic acid intraperitoneally. The onset and the number of writhing were recorded for a period of 20 min for each animal of the group. The second group received (100 mg/kg, i.p.) and they were observed for the control group. The third group of animals administered Diclofenac (5 mg/kg i.p.) and 30 min later acetic acid was administered to the animals of that group (table 3).

Tail Flick Model: The initial reading was taken immediately before administration of test and standard drugs and then 30 and 60 minutes after the administration (table 4).

DISCUSSION: The methanolic extract was prepared using leaves of Nerium indicum. The percentage yield for extract was found to be 6.26 % w/v. The preliminary phytochemical investigation revealed the presence of alkaloids, tannins, phenols and starch. Hence, total phenolic content was determined by the Folin Ciocatteu’s Method and was found to be 55.20μg/10 mL. The in-vitro antioxidant activity of extract by DPPH method showed sample has equal antioxidant potential as standard 7.

The results were found to be highly promising (p< 0.001) in comparison to the control and accompanied with dose dependence. The stem extract showed only 6.78% and 27.89% inhibition of writhing response at oral doses of 125 mg/kg and 250 mg/kg body weight of mice, respectively. The analgesic activity of stem extract was less significant as compared to that of crude flower and root extracts. All the fractions of crude leaf extract of Nerium indicum showed 100% inhibition of writhing reflex. This indicates that administration of the fractions of crude leaf extract inhibited the pain sensation produced by acetic acid since the mice did not show any writhing reflex during this investigation 10. Thus, the analgesic activity was further investigated on the leaves extract by different models. The acetic acid induced model showed the percentage inhibition for test and standard 44.5069 and 29.4551. Test drug was found better in this case as compared to standard.  Percentage TFLD in tail flick model was found to be for control 9.29 and 18.60 for 30 sec and 60 sec respectively; Standard showed 55.87 and 88.53 for 30 and 60 sec respectively and test showed 50.09 and 62.54 for 30 and 60 sec respectively.

The hot plate experiment showed the test drug to be more effective than standard as the % Inhibition was found to be for test drug at 30, 60, 90 and 120 sec was found to be 46.46, 171.08, 179.59 and 47.35 respectively where as for standard drug it was found to be 36.57, 164.57, 194.86 and 12.76 respectively. The plant showed activity for all the models. The mechanism of analgesic activity action of Nerium indicum may be due to its inhibitiory effect on the synthesis of prostaglandins and leukotrienes 11. Thus in all models the methanolic extract showed a prominent effect and found to be effective as analgesic.

CONCLUSION: The methanolic extract of Nerium indicum showed the presence of alkaloids, starch, tannins and phenols. The total phenolic content by the Folin Ciocatteu’s Method was found to be 55.20μg/10 mL in extract. The in vivo analgesic activity was found to worth effective for the indication of pain. Thus the methanolic extract of leaves of Nerium indicum can be used as analgesics.