INTRODUCTION: Spondias pinnata is a highly ornamental tree, reaching a height of 12 to18 m with upright growth. It is wholly or partly deciduous with occasionally small buttress. Its bark surface is smooth, with irregular cracks, greyish to pale reddish brown, exceeding a clear, sticky sap with turpentine smell. The leaves are aromatic, acidic and astringent.

They are arranged spirally, leaflets are alternate to opposite. They have a sour taste and used for flavoring. Flowers are stalkless, white and bisexual. Fruit is yellow in color, fleshy, drupe with a finely flavored edible pulp; seed is hard, ridged and has a fibrous surface. It is being cultivated commercially in our country for both local and international market.

The bark is astringent and refrigerant; infusion of the bark is given in dysentery, diarrhoea and to prevent vomiting. Paste of the bark is used as an embrocation for both articular and muscular rheumatism. Decoction of the bark is given in gonorrhoea. Gum of the bark is demulcent. Roots are useful in regulating menstruation. The leaves are appetizing and astringent. Fruit possesses antiscorbutic and astringent properties; used in bilious dyspepsia. The unripe fruit is good for rheumatism and sore throat. Ripe fruit is tonic, aphrodisiac and astringent to the bowels; cures burning sensation1.  As a part of our continuing studies on medicinal plants of Bangladesh the organic soluble materials of the leaf extracts of Spondias pinnata were evaluated for membrane stabilizing activity through hypotonic solution and heat induced heamolysis, in-vivo neuropharmacological activity through open field test and forced swimming test, gastrointestinal motility and acute toxicity for the first time2-6.

Collection and Processing of Plant Samples: Fresh leaves of Spondias pinnata was collected from Dhaka, Bangladesh in July 2014 and a plant sample was submitted to the Bangladesh National Herbarium for identification (Accession number- 39649). Leaf was sun dried for seven days. The dried leaf were then ground in coarse powder using high capacity grinding machine which was then stored in air-tight container with necessary markings for identification and kept in cool, dark and dry place for the investigation.

The powdered plant parts (22gm) were successively extracted in a soxhlet extractor at elevated temperature using 250 ml of distilled Methanol (40-60) °C which was followed by ethanol, and chloroform. After extraction all extracts kept in refrigerator 4°C for future investigation with their necessary markings for identification. Then kept in cool, dark and dry place for further investigation.

Blood (n=6) was drawn from healthy human volunteers without a history of oral contraceptive or anticoagulant therapy and 5ml of blood was transferred to the previously weighed micro centrifuge tubes and was allowed to form clots.

The membrane stabilization by hypotonic solution and heat-induced haemolysis method was used to assess anti-inflammatory activity of the plant extracts by following standard protocol 7-8. Since the erythrocyte membrane resembles to lysosomal membrane and as such, the effect of drugs on the stabilization of erythrocyte could be extrapolated to the stabilization of lysosomal membrane9. The membrane stabilizing activity of the extractives was assessed by using hypotonic solution-induced and heat-induced human erythrocyte haemolysis. To prepare the erythrocyte suspension, whole blood was obtained from healthy human volunteer and was taken in syringes (containing anticoagulant 3.1% Na-citrate). The blood was centrifuged and blood cells were washed three times with solution (154mM NaCl) in 10mM sodium phosphate buffer (pH 7.4) through centrifugation for 10min at 3000g 10-11.

The test sample consisted of stock erythrocyte (RBC) suspension (0.5mL) mixed with 5mL of hypotonic solution (50mM NaCl) in 10mM sodium phosphate buffered saline (pH 7.4) containing either the extract (1.0mg/mL) or acetyl salicylic acid (ASA) (0.1mg/mL). The control sample consisted of 0.5mL of RBCs mixed with hypotonic-buffered saline alone. The mixture was incubated for 10min at room temperature, centrifuged for 10min at 3000g and the absorbance of the supernatant was measured at 540nm. The percentage inhibition of either haemolysis or membrane stabilization was calculated using the following equation:

Isotonic buffer containing aliquots (5ml) of the different extractives were put into two duplicate sets of centrifuge tubes. The vehicle, in the same amount, was added to another tube as control. Erythrocyte suspension was added to each tube and mixed gently by inversion. One pair of the tubes was incubated at 56°C for 30min in a water bath, while the other pair was maintained at (0-5) °C in an ice bath. The reaction mixture was centrifuged for 5min at 2500g and the absorbance of the supernatant was measured at 560 nm. The percentage inhibition or acceleration of hemolysis in tests and was calculated according to the equation:

For the experiment Swiss albino mice of either sex, 4-5 weeks of age, weighing between 10-24 gm were collected from ICDDR, B, Dhaka. Animals were maintained under standard environmental conditions (temperature: (27.0 ±1.0) ºC, relative humidity: (55-65) % and 12 hour light/12 hour dark cycle) and free access to feed and water. The animals were acclimatized to laboratory condition for one week prior to experiments. All protocols for animal experiment were approved by the institutional animal ethical committee.

To check the neuropharmacological effects or side-effects of drug, two types of experiment is carried out which are open field test and swimming test.

Group 7, 8 received chloroform extracts of Spondias pinnata at 100 and 200mg/kg of body weight. The forced swim test was carried out on mice individually forced to swim in an open acquire water tank apparatus (29cm x 19cm x 20cm), containing 9 cm of water at 25±1°C. The total duration of immobility during the 4-min test was scored as described. Each mouse was judged to be immobile when it ceased struggling and remained floating motionless in the water, making only those movements necessary to keep its head above water. The duration of immobility was recorded. Decrease in the duration of immobility during the FST was taken as a measure of antidepressant activity13.

Forty eight Swiss Albino mice, weighing between 10-20 g were selected and housed properly for 10 days before performing the experiment. On the test day, the animals were divided into eight groups of six mice each. They were weighed and deprived of food, with free access to water. Three hours after food deprivation, the animals in group 1 received orally by gavages 5 ml/kg body weight of 0.9% NaCl (normal saline) as control group, while those in group 2 received 5 mg/kg body weight of butapen as standard group. The other six groups received their respective doses as shown in the table. After 90 min, 0.3 ml of an aqueous suspension of 5% charcoal in normal saline was administered to each animal orally by gavages (time 90 min). Sixty minutes later they had free access to food (time 150 min).

The animals were observed at 5 min intervals until feces with charcoal were eliminated (maximum time of observation was 300 min). Charcoal was observed on the feces using normal light when it was easily visible, or using a microscope to help the identification of the black spots. The results were based on the time for the charcoal to be eliminated14.

Acute toxicity describes the effects of a substance which result either from a single exposure or from multiple exposures in a short space of time (usually less than 24 hours). The acute toxicity study was conducted to find out LC50 of the test samples. The test samples were administered orally to the test animals at different concentration (500 & 1000 mg/kg body weight).

After administration of the extract solutions mortality or sign of any toxicity was observed for one hour. Then the test animals were observed every 1 hour for next 5-6 hours. The animals were kept under observation for 1 week15-17.

In the study of membrane stabilizing activity, the leaf extracts of Spondias pinnata at   concentration of 1.0mg/mL were tested against the lysis of human erythrocyte membrane induced by hypotonic solution as well as heat, and compared with the standard acetyl salicylic acid (ASA) (Table 1). For hypotonic solution induced haemolysis, at a concentration of 1.0mg/ mL, the ethanol extract inhibited 76.92% haemolysis of RBCs as compared to 85.42% produced by acetyl salicylic acid (0.10mg/mL. The methanol and chloroform soluble extractives also revealed good inhibition of haemolysis of RBCs. On the other hand, during heat induced condition different organic soluble materials of Spondias pinnata demonstrated 76.68%, 77.19% and 74.83% inhibition of haemolysis of RBCs, respectively whereas ASA inhibited 78.04%.

TABLE 1: EFFECT OF EXTRACTIVES OF SPONDIAS PINNATA ON HYPOTONIC SOLUTION AND HEAT INDUCED HAEMOLYSIS OF ERYTHROCYTE 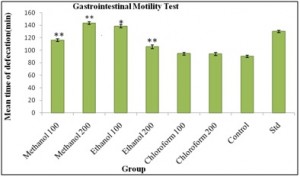 FIG. 1: TIME OF DEFECATION AT GASTROINTESTINAL MOTILITY ACTIVITY AFTER ADMINISTRATION OF DOSES OF CONTROL, STANDARD AND EXTRACTS

Open field test: This experiment was performed to assay general locomotor activity levels. After investigation with leaf extracts of Spondias pinnata following data was observed (Table 2 and Fig.2, 3 and 4). 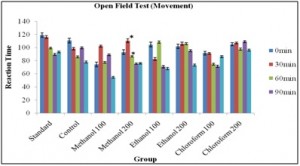 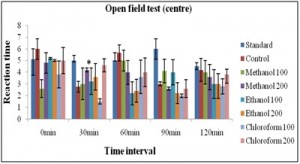 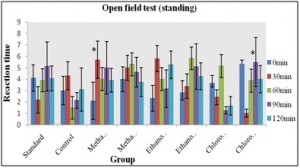 Table 2 and Fig. 2, 3 & 4 represents the effect of different extracts of Spondias pinnata on various parameter of open field test. The most important step in evaluating drug action on CNS is to observe its effect on locomotors activity of the animal. The activity is a measure of the level of excitability of the CNS and this decrease may be losely related to sedation resulting from depression of the central nervous system. The extract significantly decreased the locomotor activity as shown by the results of the open field.Chloroform extract decreased movement of rodents in a dose dependent manner but could not reach significance; whereas clonazepam decreased movement significantly. Clonazepam also decreased standing significantly. But extracts exhibited exert effect on standing and entrance in the center of the open field.

Ethannol and chloroform extract showed decreased immobility with dose dependently like the standard diazepam which indicates its anti-depressant effect. This plant part has a great sensitivity with all the antidepressant classes and all the mechanisms of action of treatments could be determined, but clinical correlations should be considered very carefully. When rodents are forced to swim in a confined place, they tend to become immobile after vigorous activity (struggling). This stressful inescapable situation can be evaluated by assessing different behavioral strategies and immobility during the test could be an efficient adaptive response to the stress. The development of immobility when the rodents are placed in an inescapable container of water reflects the cessation of persistent escape directed behavior18.

Acute toxicity: In the time of investigation of acute toxicity none of the extracts ranging from 500 & 1000mg/kg body weight showed any sign of toxicity in the period of one week (Table 4).

CONCLUSION: So far some chemical and biological investigations have been carried out on Spondias pinnata plant in this study mainly focusing on the leaf of the plant but those are considered to be preliminary. As a result more sophisticated research is necessary to reach concrete conclusion about the finding of the present study. On the basis of above result and available reports, all three leaf extracts of Spondias pinnata had potent membrane stabilizing activity. This study also exhibited little gastrointestinal motility activity and neuropharmacological activity. But all three leaf extracts of Spondias pinnata did not have any effect on the acute toxicity test.

Therefore, further chemical and pharmacological studies with extract of Spondias pinnata for in vivo antioxidant, analgesic activity, anti-pyretic activity, hypoglycemic effect, anti-cancer activity, isolating new bioactive compounds and evolution of their extracts mode of action and chronic toxicity profile might be the next steps to be followed to eventually find new led compounds. The plant can be further screened against various diseases in order to find out its unexplored efficacy and can be a potential source of chemically interesting and biologically important drug candidates.

ACKNOWLEDGEMENT: We thank Office of the Iinstitute of Energy, Environment Research and Development (IEERD), University of Asia Pacific (UAP), Dhaka, Bangladesh for their assistance.