INTRODUCTION: Albizia lebbeck (L.) Benth belongs to Fabaceae (alt. Leguminosae) family. The Fabaceae or Leguminosae, commonly known as the legume, pea, or bean family, with 730 genera and over 19,400 species 1. It is a deciduous tree about 18-30m long with a trunk 50cm to 1m in diameter, gray colored bark 2, leaves are evenly 2-pinnate and the leaflets are in 5-9 pairs, flowers are stalked, white fragarant in globose umbellate heads 2-3.8cm diameter, stamens are longer than the corolla 3.

Albizia lebbeck is used as general and universal antidote. Preliminary phytochemical screening of Albizia lebbeck was done earlier 4. The plant is considered as the most potent alexipharmic and every part of it is prescribed for the treatment of bites and stings from venomous animals. It possesses anti-inflammatory activity 5, favorable response in all kinds of allergic conjunctivitis 6, anti bacterial activity against infectious diarrhea 7, 8.

The alcoholic extract of the bark revealed moderate anthelmintic activity against in vitro human ascaris lumbricoides9. Bark is antihelminthic, antispermatogenic10, antiasthmatic11, antidiabetic12, relives toothache, and strengthens the gums and the teeth, used in leprosy, skin diseases. The root is astringent and used in ophthalmia, hemicranias, antihelminthic, rat bite and shows antifungal activity 13. The seeds are anti-tumor, aphrodisiac, brain tonic, used for gonorrhea and tuberculous glands; the oil is applied topically in leucoderma (Yunani) 14, 15. The pods show antispermatogenic effect 16, 17. The leaves are good for syphilis, ophthalmic diseases, night blindness anxiolytic activity and nootropic activity18, 19. They are reported to be good fodder with 17-26% crude protein; 100 kg of leaves yield 11-12 kg of digestible protein and 37 kg of digestible carbohydrate20. In the area of apiculture its flowers are fragrant and attract bees. It is highly regarded by beekeeper for the light colored honey its nectar provides 21. Albizia lebbeck has nitrogen fixing woody legume. The nitrogen fixation increases with the age of the plant 22.

The present study deals with the biological investigation of different extracts of the bark of the plant Albizia lebbeck. The antimicrobial activity, cytotoxicity and free radical-scavenging activity of the bark of this plant is being reported here.

Chemicals and solvents: The reagents used in this work were of analytical grade (Merck and BDH). All the solvents were distilled before use.

Sample collection: The bark of Albizia lebbeck (locally known as Shirish) was collected from Dhaka city, Bangladesh. The taxonomy of the plant was confirmed by consulting with Prof. Dr. Md. Abul Hassan, Department of Botany, University of Dhaka. A voucher specimen of this plant was deposited in the Bangladesh National Herbarium (BNH), having ACCESSION NO DACB 36551. The bark was first cleaned and dried below 400C. The dried bark was grinded to powder by a cyclotec grinder (200 meshes) and the powder was stored in an airtight bottle, and this was used throughout the investigations.

Extraction: The powdered bark (800 gm) was extracted with methanol (3×2.5 Liter) at room temperature for 48 hours. Then it was filtered and the filtrate was concentrated below 40°C with a rotary evaporator to obtain a dry mass. Dry mass of methanol extract (~40 gm) was triturated with distilled water (200 ml) and then the solution was partitioned with n-hexane followed by ethyl acetate and lastly with n-butanol.

Antimicrobial screening: Five extracts (hexane, methanol, ethyl acetate, water and butanol extract) of the bark of Albizia lebbeck were used for the test. The antimicrobial sensitivity of the extracts was tested using the disc diffusion methods 23, 24 and the sample concentration was 400mg per disc. Both gram-positive (Staphylococcus aureus, B. cereus) and gram-negative (Escherichia coli, p. Aervgin and Salmonella typhi) organisms were taken for the test. The test samples were weighed accurately and calculated amounts of the solvents were added accordingly using micropipette to the dried samples to get desired concentrations. The test samples were applied to previously sterilized discs using adjustable micropipette under septic conditions.

The sample discs, the standard antibiotic discs and the control discs were placed gently on the previously marked zones in the agar plates pre-inoculated with test bacteria and fungi. The plates were then kept in a refrigerator at 40C for about 24 hours upside down to allow sufficient diffusion of the materials from the discs to the surrounding agar medium. The plates were then inverted and kept in an incubator at 370C for 24 hours. The antimicrobial potency of the test agents are measured by their activity to prevent the growth of the micro-organisms surrounding the discs which gives clear zone of inhibition. After incubation, the antimicrobial activities of the test materials were determined by measuring the diameter of the zones of inhibition in millimeter with a transparent scale. In this investigation, chloramphenicol (30mg/disc) standard disc was used as the reference.

DPPH radical scavenging activity is described as IC50, which is the concentration of samples to produce 50% reduction of the DPPH. 200μl of various concentrations of the extracts in methanol was added to 2 ml of a 0.004% methanol solution of DPPH. After 30 min incubation period at room temperature the absorbance was read against a blank at 517 nm. Inhibition free radical DPPH in percent (I%) was calculated as follows:

Where Ablank is the absorbance of the control reaction (containing all reagents except the test material). Extract concentration providing 50% inhibition (IC50)was calculated from the graph plotted inhibition percentage against extract concentration. Ascorbic acid was used as positive control. Tests carried out in triplicate and average value was taken.

Brine shrimp lethality bioassay: 4 mg of each of the test samples (methanol, butanol, ethyl acetate, n-hexane and aqueous extract) were taken and dissolved in 200 µl of pure dimethylsulfoxide (DMSO) in vials to get stock solutions. Then 100 µl of solution was taken in test tube each containing 5ml of simulated seawater and 10 shrimp nauplii26. Thus, final concentration of the prepared solution in the first test tube was 400µg/mL. Then a series of solutions of varying concentration was prepared from the stock solution by serial dilution method. In each case 100µl sample was added to test tube and fresh 100µl DMSO was added to vial.

Thus the concentrations of the obtained solution in each test tube were as- 400, 200, 100, 50, 25, 12.5, 6.25, 3.125, 1.563, 0.781 and 0.391 mg/ml. In the present study vincristine sulphate was used as the positive control. After 24 hours, the vials were inspected using a magnifying glass and the number of survived nauplii in each vial was counted. From this data, the percent of lethality of the brine shrimp nauplii was calculated for each concentration.

The antimicrobial sensitivity of five different extracts (hexane, ethyl acetate, butanol, methanol and water extract) of the bark of Albizialebbeck was tested using sample concentration 400mg per disc. Standard disc of Chloramphenicol (30 mg per disc) was used as reference. After incubation the antimicrobial activity of test material were determined by measuring the diameter of zones of inhibitions in milimeter(mm) and following results (Table 1) were found.

From these results (Figure 1), it appears that all the extracts of Albizia lebbeck have moderate antimicrobial activity27. Butanol extract was found to be most effective for both gram-positive and gram-negative bacteria and water extract showed least activity. Also some other factors for example, the extraction methods into column volume and culture medium composition pH and incubation temperature can influence the results28. 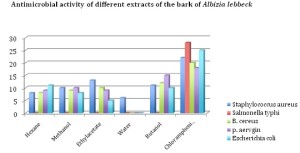 TABLE 2: IC50 VALUES OF STANDARD AND DIFFERENT EXTRACTS OF BARK OF ALBIZIALEBBECK

Free radical-scavenging activity: The antioxidant potency of five extracts (water, hexane, ethyl acetate, methanol and butanol) of the bark of Albizia lebbeck was studied using 1, 1-diphenyl-2-picrylhydrazyl. IC50 value was calculated from the graph plotted inhibition percentage against extract concentration and results are given below (Table 2). The results (Figure 2) show that all the tested plant extracts have moderate to potent antioxidant activity 29. The hexane extract exhibited highest radical scavenging potentiality with an IC50 value of 2.54µg/mL compared to ascorbic acid having IC50 value of 0.58µg/mL, which is a well-known antioxidant compound. Water and methanol extract also showed good antioxidant activity (IC50 value 1.41µg/mL and 1.05µg/mL respectively). Other extracts (ethyl acetate and butanol) also showed moderate antioxidant activity.

Brine shrimp lethality bioassay: Bioactive compounds are almost always toxic at higher dose. Thus, in vivo lethality in a simple zoological organism can be used as a convenient informant for screening and fractionation in the discovery of new bioactive natural products.

TABLE 3: LC50 VALUES OF STANDARD AND DIFFERENT EXTRACTS OF BARK OF ALBIZIA LEBBECK

Crude extract of hexane, ethyl acetate, butanol, methanol and water were screened by brine shrimp lethality bioassay for probable cytotoxic activity of Albizia lebbeck. Plotting of log of concentration versus percent mortality for all test samples showed an approximate linear co-relation. From the graphs, the median lethal concentration (LC50, the concentration at which 50% mortality of brine shrimp nauplii occurred) was determined for the samples (Table 3). The degree of lethality was found to be proportional to the concentration ranging from lower to higher. The LC50 value of hexane extract was found to be 2.95mg/ml, at concentration 0.49mg/ml, which showed the highest toxicity. From this, it can be said that the highest toxic constituent may be non polar in nature (Figure 3). 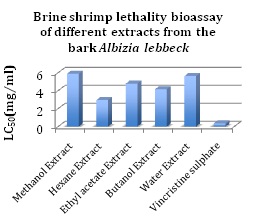 It appears from the result that all the test samples were lethal to brine shrimp nauplii. Comparison with positive control vincristine sulphate signifies that cytotoxicity exhibited by the crude extract of hexane, ethyl acetate, butanol, methanol and water are promising and they might have antitumour or pesticidal compounds30. However, further study with specific case may establish its potentiality and discovery of new cytotoxic compounds