INTRODUCTION: CdSe quantum dots are some of the most studied nanocrystals due to their use in numerous applications such as solar cells, bio-labels, optoelectronics, and many others 1-3. Even though there are numerous routes to synthesize CdSe nanocrystals in sub-10-nm regime, the advantages of biosynthetic processes include eco-friendliness, economy, and ambient characteristics.

Researchers opted for alternative synthetic routes, including biological methods using microbes as a potential alternative to the existing hazardous methods, for a variety of nanoparticles 4-6.

Microbes possess complex synthetic machineries that explain the limited exploitation of biosynthetic routes. In general, microorganisms possess biomolecular machineries to overcome the physiological stress created by ‘foreign’ substances 7. It is believed that counter-stress measures evolved by microorganisms are responsible for the biosynthesis of nanoparticles. A number of reports have indicated the use of precursors for the synthesis of nanomaterials using microbes that are otherwise toxic to the microbes in question 8.

A better understanding of the role of different factors involved in the process of detoxification of physiological stress is imperative to exploit the full potential of bio-synthetic routes. In an attempt to understand the biosynthesis of nanoparticles by fungi, the enzymes, sulfite reductase and nitrate reductase and a templating protein were isolated from the extra-cellular broth of fungus Fusarium oxysporum and utilized in vitro synthesis of gold, silver, and other metal sulfide nanoparticles 9-11. Molecular templates are used to control precisely the fabrication of nanoparticles.

Glycopeptides play a vital role in the homeostasis in a biological system that includes many vital process such as fertilization, endocrine system, cell-cell interaction, etc.16-18. Glycopeptides are widely used as targeting molecules that can be attached to a molecule of interest to be targeted to a particular cellular location. Tsao et al. have studied the tissue distribution and imaging potential of 68 Ga-glycopeptide using Positron Emission Tomography (PET) 19. Richter et al. have reviewed the potential of radio-labeled peptides in diagnostic imaging and therapy 20.

Experimental: All the chemicals and reagents were from standard commercial sources and of the highest purity available. The enzyme nitrate reductase was purified as described by Kumar et al 10. The reaction mixture (3 mL) containing CdCl2 (1 mM), SeCl4 (1 mM), NaNO3 (5 mM), 100 μg of synthetic peptide (SP) having amino acid sequence (γ-Glu-Cys-Glu-Cys)-Gly, 1.0 mM α-NADPH (reduced form of nicotinamide adenine di-nucleotide phosphate sodium salt), and 1.66 U of nitrate reductase was incubated under anaerobic conditions at 25 °C.

The reaction mixture was subjected to UV-Vis spectrophotometric measurements performed on Shimadzu dual-beam spectrophotometer (model UV-1601 PC) operated at a resolution of 0.5 nm. Fluorescence was measured by exciting samples at 366 nm, and the emission spectra were recorded from 400 to 700 nm using a spectrofluorimeter, FLS920, Edinburgh Instruments, UK at a scan rate of 300 nm/min. PXRD patterns were recorded in 2θ range of 20°–80° with step size of 0.02° and time 5 s per step using Philips X’PERT PRO instrument equipped with X’celerator, a fast solid-state detector with Iron-filtered Cu Kα radiation (λ=1.5406 Å) as the source. CdSe nanoparticles suspension coated on carbon coated copper TEM grids were subjected to TEM analysis on FEI Tecnai 30 transmission electron microscope operated at an accelerating voltage of 300 kV.

Dynamic light scattering measurements were performed on Brookhaven 90 Plus/BI-MAS Instrument (Brookhaven Instruments, New York), equipped with a 15 mW solid state laser at a wavelength of 657 nm, and scattering signals were collected at 90° at an average of 6 runs per scan. Chemical analysis of a drop-coated film of CdSe nanoparticles suspension on a conductive substrate was carried out on  ESCALAB MK II set-up X-ray photoelectron spectrometer (V. G. Scientific, UK) with Al Kα as the exciting source (hγ = 1486.6 eV) operating at an accelerating voltage of 10 kV and 20 mA at a pressure of about 10-8 Pa.

The core level binding energies (BEs) were aligned with respect to C 1s binding energy (BE) of 285 eV. The pI of the synthetic peptides was calculated from peptide property calculator available online (http://www.innovagen.com/custom - peptide-synthesis/peptide-property-calculator/ peptide -property- calculator.asp). The free amino groups were estimated as described elsewhere 21-22.

RESULTS AND DISCUSSION: The reaction mixture containing CdCl2, SeCl4, NaNO3, the synthetic peptide (SP) (γ-Glu-Cys-Glu-Cys)-Gly, NADPH, and nitrate reductase, when incubated at 25 °C resulted in the formation of CdSe quantum dots (Fig. 1). The synthesis was monitored by following the appearance of absorption band centered at 366 nm that indicated the formation of CdSe nanocrystals. No absorption band at 366 nm was found in the absence of nitrate reductase or NADPH, and when the denatured enzyme was used (data not shown). This observation confirms involvement of enzyme in the reduction of Cd2+ and Se4+ to stable CdSe nanoparticles utilizing nitrate as substrate and NADPH as cofactor. We used the fungus, Fusarium oxysporum, for the extracellular biosynthesis of CdSe quantum dots; the same was used in earlier study to purify the nitrate reductase 23.

The as-synthesized CdSe nanocrystals were subjected to preliminary investigation using dynamic light scattering to determine the size distribution of CdSe nanocrystals. The nanocrystals were in the range of 3.9 to 9.0nm. The absence of SP did not result in the synthesis of CdSe quantum dots as indicated by the absence of absorbance at 366 nm. A possible mechanism of the biosynthesis of CdSe nanoparticles using enzymes in the presence of synthetic capping peptides is proposed. The SP which has a pI of 3.1 behaves as an anionic polyelectrolyte in solution at pH 7.2. The precursors, cadmium chloride (CdCl2) and selenium tetrachloride (SeCl4), completely dissociate in aqueous solution generating Cd2+ ions and Se4+ ions, respectively.

In neutral or slightly alkaline solution, the peptide having pI 3.1 carries a net negative charge of ­–2.1 owing to the functional groups of constituent amino acids, thereby attracting Cd2+ and Se4+ ions due to electrostatic interactions. This might result in the formation of nuclei for nanoparticles. The reduction of the electrostatically bound cadmium and selenium cations results in the formation of stable CdSe nanocrystals stabilized by the SP. It is worth to note that CdSe nanoparticles of larger size were synthesized upon incubation of the same precursors in the culture broth of the fungus, Fusarium oxysporum 23. Similarly, Zhou et al. demonstrated the potential of His-tag proteins in the crystallization of ZnS nanocrystals 24.

The absorption spectra of the as-prepared CdSe in aqueous solution showed a peak corresponding to the first excitonic transition. The relative blue shift in the UV-Visible spectrum corresponding to 366 nm indicates the formation of CdSe quantum dots with a band gap of 2.73eV, which is relatively large as compared to that of bulk CdSe (698 nm, 1.78eV) (Fig. 1). This is in close agreement with the quantum size effect associated with direct gap semi-conductors. Luminescence characteristics of the nanocrystals were studied by exciting the nanocrystals in aqueous solution at 366 nm.

The emission band centered at 454 nm (Fig.1) could be attributed to the band gap or near band gap emission resulting from the recombination of electron-hole pairs in the CdSe nanocrystals with a band gap of 2.73 eV. This corresponded well with the photoluminescence achieved for CdSe quantum dots. The half width of the emission peak of ≈ 90 nm indicated that the size distribution of particles was not even. 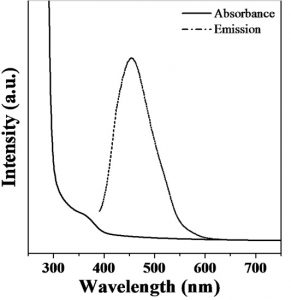 X-ray diffraction analysis of the sample showed well-defined Bragg’s reflections indicating that the particles were crystalline in nature and possessed wurtzite structure (Fig. 2). The diffraction measurements also indicated that the CdSe nanocrystals were in hexagonal phase having cell parameters of a = b = 4.30 and c = 7.02 and α = β = 90° and γ =120°. The peaks corresponding to cadmium oxide were also observed (indicated by (*) asterisk) which might be due to the oxidation of Cd atoms present on the surface of CdSe nanoparticles. 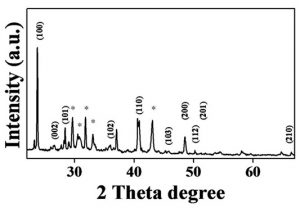 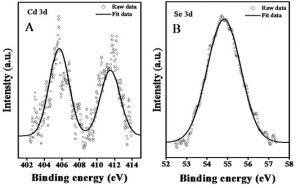 TEM observations showed that the CdSe nanocrystals were discrete, and essentially spherical in shape (Fig. 4. A). The particle size histogram was constructed by counting ~100 individual particles from different TEM images. The formation of spherical nanoparticles might be due to its energetically favourable nature. The nanoparticles were found to be in the range of 3.9 to 9.0 nm with an average size of ~5.5 nm (Fig. 4.B). HR-TEM images showed that the nanoparticles possess good crystallinity, with discrete lattice fringes (Fig. 4.C & D). 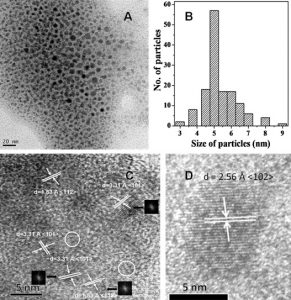 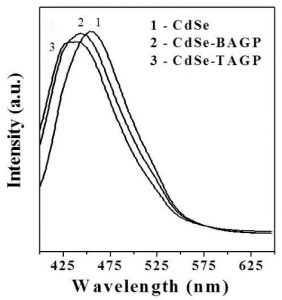 The formation of CdSe-glycopeptides conjugates indicates the potential of the surface reactive amino groups to be utilized in the conjugation of these CdSe nanoparticles with other biomolecules such as proteins, polysaccharides, etc. This obviates the need for further functionalization of the as-synthesized CdSe nanoparticles for potential biomedical applications.

In this report, we have attempted to shed some light on the biomolecular factors that might be responsible for the biosynthesis of CdSe nanoparticles by the fungus, Fusarium oxysporum. We have demonstrated that the enzymes produced by fungus, Fusarium oxysporum could be used for the production of water-dispersible CdSe nanoparticles. In addition, we have proved that synthetic peptide, (γ-Glu-Cys-Glu-Cys)-Gly could be used as a capping peptide for the synthesis of CdSe nanoparticles that could be used for biomedical applications. This method is simple, efficient, straight-forward, economical, and eco-friendly for the production of water-dispersible CdSe quantum dots.

CONFLICT OF INTEREST: The authors have no financial conflicts of interest.

ACKNOWLEDGEMENTS: We sincerely thank Dr. SM Gaikwad for her sincere and valuable inputs in realizing this manuscript. We would like to inform that Dr. MI Khan, who conceptualized the idea on which this work is based, died of illness during the course of this work. His contribution to this work is acknowledged with due respect. AAA thank the Council of Scientific and Industrial Research (CSIR), Government of India, for financial assistance. This work was supported by a grant to Dr. MI Khan from Department of Biotechnology, India. Imran Uddin thank the Council of Scientific and Industrial Research (CSIR), India for Senior Research Associate ship (Scientists’ Pool Scheme).

Abu A. Ansary *, Imran Uddin and Muhammed I. Khan