ABSTRACT: Extracellular lipases are ubiquitous in occurrence and are essential for various applications such as organic synthesis, hydrolysis of fats and oils, modification of fats, flavor enhancement in food processing, resolution of racemic mixtures and chemical analysis. In the present study, an attempt was made to screen and characterize potent extracellular lipase producing bacteria from the pond water of Dakshina Kashi Kshetra, Antharagange, Vibhuthipura Village, Kolar Taluk, and Kolar District, Karnataka, India. Based on the ability to produce extracellular lipase the isolate was selected and identified through 16S rRNA sequencing as Acinetobacter nosocomialis.

INTRODUCTION: The exploitation of micro-organisms is widely used in many different industry sectors, such as agricultural, chemical, environmental, food, health, etc. 1 Enzyme are delicate protein molecules found in all living organisms, and are necessary for cell growth and differentiation 2. The extracellular lipases are ubiquitous in occurrence and are essential for various applications such as organic synthesis, hydrolysis of fats and oils, modification of fats, flavor enhancement in food processing, resolution of racemic mixtures and chemical analysis 3. The lipase enzymes are well known as a subclass of hydrolases 4.

Lipases (glycerol-ester-hydrolases, E.C.3.1.1.3.) are carboxylesterases that are capable of catalyzing the hydrolysis of triglycerides into diglycerides, monoglycerides, free fatty acids and glycerol 5, 6. Lipases are the single class of enzymes which play an important part in the metabolism of many microorganisms like species of Pseudomonas sp. Pseudomonas fragi 7, Pseudomonas fluorescent 8, 9, Pseudomonas sp. ATCC 21808, 10, 11 Pseudomonas cepacia 12, 13, Pseudomonas putida 3SK 14 and Pseudomonas aeruginosa 15.

Experimental Chemicals: All chemicals and reagents used in this research were of analytical grade and are mostly purchased from Sigma USA and Hi-media Mumbai.

Collection and Preparation of Sample: Water samples were collected from the pond of Dakshina Kashi Kshetra, Antharagange, Vibhuthipura Village, Kolar Taluk, and Kolar District, Karnataka, India. The samples were labeled and preserved at 8 ºC 36. Before isolation of lipase-producing microbes, the samples were centrifuged at 10,000 rpm for 5 min at 37 °C, and the resultant pellet was suspended in distilled water 37, 38 for the isolating lipase promising microbes.

Isolation of Lipase Producing Microorganisms by Plate Assay: The suspended sample of 100 µl was inoculated on tributyrin agar plates containing per liter of peptone, 5 g; yeast extract, 3 g; tributyrin, 10 ml, and agar-agar, 20 g followed by incubation for 24 h at 37 °C to visualize the micro-organisms promising for extracellular lipases 39, 40. A clear zone around the growth of the bacteria was indicated to extracellular lipase activity.

Molecular Characterization of Selected Extra-cellular Lipase Producing Microorganism: The molecular identification of the selected strain was carried out by sequencing and analysis of the 16S rRNA gene. Therefore, genomic DNA was extracted with the commercial kit Qiagen and the partial 16S gene was amplified as described by Hiraishietal 41, using the pair of primers 16S-F: AGAGTTTGATCCTGGCTCAG and 16S-R: AAGGAGGTGATCCAGCCGCA. The reaction consisted of 50 μl containing 1× buffer of Taq DNA polymerase, 0.2 mM of each dNTP, 0.5 μM of each primer, 2 mM of magnesium chloride, 1 U of Taq DNA polymerase (Invitrogen), 50 ng of genomic DNA, and the final volume adjusted with ultrapure water. The program used for PCR was 94ºC for 240 sec, followed by 35 cycles of 94 ºC for 30 sec, 50 ºC for 30 sec and 72 ºC for 30 sec and finally, extension at 72 ºC for 360 sec.

Subsequently, the amplification product was cleaned and analyzed on BDT v3.1 cycle sequencer on ABI3730XL, Genetic Analyzer. The consensus sequence of the 16S rDNA gene was generated from forward and reverse sequence data using aligner software. The 16S rDNA gene sequence was used to carry out BLAST with the database of the NCBI genebank database. Based on maximum identity score first ten sequences were selected and aligned using multiple alignment software program Clustal W. Distance matrix was generated, and the phylogenetic tree was constructed using MEGA 7. 42, 43

Screening and Molecular Characterization of Lipolytic Bacteria: The water sample was placed on tributyrin agar media (TBA), after 24 h incubation period seventeen colonies were identified for extracellular lipase activity Fig. 1. Best four colonies were streaked on TBA media for confirming the enzyme activity Fig. 2. Based on the zone of clearance one colony was subjected to molecular identification and identified as Acinetobacter nosocomialis Fig. 3, 4 and 5. 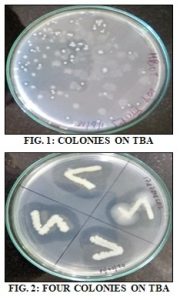 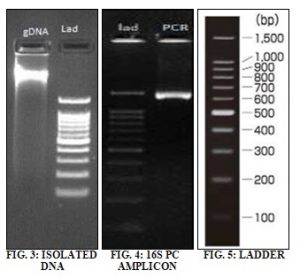 BLASTn search of this nucleotide sequence with the most similar 16S rRNA gene sequences of the Gen Bank database (http:// www. ncbi.nlm.nih. gov/blast) revealed the closest sequence identities from the sequence database. All the similarities have been summarized in Table 1. 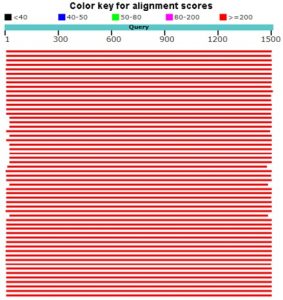 FIG. 6: COLOUR KEY FOR ALIGNMENT SCORE OF NUCLEOTIDE QUERY SEQUENCE OF BACTERIAL ISOLATE WITH OTHER NUCLEOTIDE SEQUENCES PRESENT IN THE DATABASE USING BLAST ANALYSIS (RED LINES SHOW THE SIMILARITY OF THE QUERY SEQUENCE IS MORE THAN 200)

Molecular Phylogenetic Analysis by Maximum Likelihood Method: The evolutionary history was inferred by using the maximum likelihood method based on the Kimura 2-parameter model 42. The bootstrap consensus tree inferred from 1000 replicates is taken to represent the evolutionary history of the taxa analyzed 43. Branches corresponding to partitions reproduced in less than 50% bootstrap replicates are collapsed. The percentage of replicate trees in which the associated taxa clustered together in the bootstrap test (1000 replicates) is shown next to the branches 43. Initial tree(s) for the heuristic search were obtained automatically by applying Neighbor-Join and BioNJ algorithms to a matrix of pairwise distances estimated using the maximum composite likelihood (MCL) approach and then selecting the topology with superior log-likelihood value. The analysis involved 11 nucleotide sequences. Codon positions included were 1st + 2nd + 3rd + Noncoding. All positions containing gaps and missing data were eliminated. There were a total of 1459 positions in the final dataset. Evolutionary analyses were conducted in MEGA7. 43 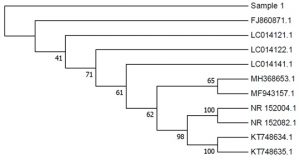 FIG. 7: PHYLOGENETIC TREE OF GENUS ACINETOBACTER 16S rRNA. THE GENE BANK ACCESSION NUMBERS OF THE ANALYZED SEQUENCES ARE SHOWN. A TOTAL 100 BOOTSTRAP REPLICATES WERE PERFORMED, AND THE BOOTSTRAP VALUES ARE INDICATED AT THE BRANCH POINTS

CONCLUSION: Keeping in view the industrial importance of extracellular lipases, researchers are more and more focusing on discovering bacterial extracellular lipases with novel properties to meet the industrial requirements as well as increasing demand of global enzyme market. The search for promising strains of bacterial extracellular lipase producers is a continuous process. The isolates which show higher lipase activity were selected for molecular characterization. The organism was identified as Acinetobacter nosocomialis. Based on data obtained in the present work, it can be concluded that Acinetobacter species isolates can be employed in the production of important industrial lipases.

ACKNOWLEDGEMENT: The authors would like to thank Dr. (Fr) Thomas C. Mathew, Vice Chancellor, Christ (Deemed to be University), Bengaluru, for encouraging and supporting us throughout our review work and also thank Mr. William Joseph for helping in sample collection.