INTRODUCTION:    Endophytes are defined as "microbes that colonize living, internaltissues of plants without causing any immediate, overt negativeeffects"1.

Common endophytes include a variety of bacteria, fungi and actinomycetes, and they can be isolated from wild or cultivated crops of either the monocotyledonous or dicotyledonous plant groups 2. It is noteworthy that, of the nearly 300,000 plant species that exist on earth, each individual plant is host to one or more endophytes3. However, only a handful of plants, mainly grass species, have been completely studied in relation to their endophytic biology 4. Endophytic bacteria in a single plant host are not restricted to a single species but comprise several genera and species. The exact mechanism by which bacteria induce protection in the host plants remains unclear, although production of siderophores, metabolites with anti-fungal activity, or competition for nutrients and exclusion from the ecological niche of colonizing microorganisms have been suggested as possible mechanisms 5. Some endophytic bacteria exert several beneficial effects on host plants, such as stimulation of plant growth, nitrogen fixationand induction of resistance to plant pathogens 6.

Such bioactive metabolites find wide-ranging application as agrochemicals, antibiotics, immunosuppressants, antiparasitics, antioxidants, and anticancer agents 8. Many workers have demonstrated that the endophytes isolated from medicinal plants are excellent producers of strong fungicides, bactericidal and cytotoxic metabolites 9.

On the basis of above justification, the present endeavour was to study the bioprospecting potential of endophytic bacteria isolated from indigenous plants of Ambala, Haryana, India.

Sample collection: For the isolation of endophytic bacteria, healthy and fresh leaves of different plants like Tomato, Aloevera, Chilli, Radish, Cauliflower, Cabbage, Arjun, Pomegranate, Grass, Carrot, Coriander, Guava, Stevia, Mint, Garlic, Peas, Giloy, Turmeric, Neem, Rose were collected from different areas of Ambala, Haryana. Each sample was tagged and placed in separate polythene bags and transported aseptically to the laboratory and processed within 24 hours of collection. Fresh plant materials were used for isolation to reduce the chance of contamination 10. 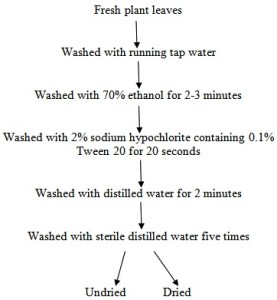 Purification and maintenance of endophytic bacteria: Bacteria were purified by streak plate method on NA and incubated at 370C for 24hrs and transferred to NA slants and then maintained in refrigerator at 40C till further analysis 12.

TABLE 1: A LIST OF BACTERIAL STRAINS USED IN PRESENT STUDY

Isolation of endophytic bacteria: Endophytic bacteria were isolated from different plants. The isolates were differentiated on the basis of their colony morphologies; two-three distinct colonies were observed and selected from each sample. A total of thirty bacterial isolates were finally selected, purified and maintained for further analysis. 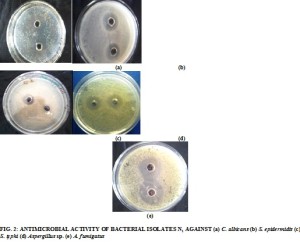 In the present study, isolate obtained from tomato showed strong antibacterial activity against S. typhi with zone of inhibition 30mm. In vitro experiments on antifungal activities of the isolates against pathogenic fungi showed that endophytic bacteria also possess the ability to inhibit the growth of several plant pathogenic fungi by the production of diverse microbial metabolites including antibiotics. In the study carried out by Ebrahimia et al 19 none of the five endophytic bacterial isolate showed activity against E. coli   but in our study four out of 30 isolates showed activity against E. coli. Other endophytic bacterial filtrates which showed low or lack of antimicrobial activity in the bioassays may have active compounds but probably in smaller amounts and/or the screened filtrates could yield more potent compounds once they had undergone some purification 20. Also, extracts which showed no antimicrobial activity in these assays may be active against other microbes which were not tested 19.

Number indicates the diameter of zone of inhibitions in mm, ‘-’ No activity

Identification of endophytic bacteria: Out of 30 isolates only 6 isolates which showed the best antimicrobial, enzymatic and dye degradation activity were selected for further identification. For the morphological and biochemical characterisation of bacterial isolates, different tests were performed. 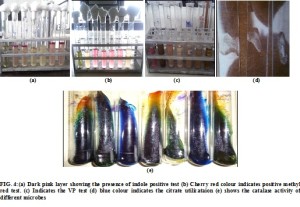 CONCLUSION: In conclusion, endophytic microorganisms are a very promising source for production of bioactive compounds. They are a poorly investigated group of microorganismsthat represent an abundant and dependable source of bioactiveand chemically novel compounds with potential for exploitationin a wide variety of medical, agricultural, and industrial arenas.The mechanisms through which endophytes exist and respond totheir surroundings must be better understood in order to bemore predictive about which higher plants to seek, study, andspend time isolating micro floral components. This may facilitatethe product discovery processes. Further investigations are suggested in order to classify the microorganisms and exploit the potential of the substance produced to inhibit pathogenic microorganisms.

ACKNOWLEDGEMENTS: The authors are grateful to the Management and Director of Ambala College of Engineering and Applied Research (ACE), Devsthali, PO-Sambhalkha, Ambala, Haryana for providing laboratory facilities in the Department of Biotechnology Engineering and also encouraging us to write this research article.