Background/Aim: Endosulfan is a pesticide of organochlorine group uses by 55 % of farmers in Bihar. Present study aims to illustrate effect of Endosulfan on biochemical, hormonal and sub cellular anomalies of spermatozoa of mice and their restoration through root extract of Withania somnifera.

Materials and Methods: Experimental mice were administered with endosulfan for eight weeks followed by eight weeks administration of Withania somnifera.

Conclusion: These combined effect finally leading to restoration in structure of spermatozoa in mice. This is very effective in restoring male fertility by combating endosulfan toxicity.

INTRODUCTION: Chemical pesticides have become part of our agriculture since 1960s. Farmers have been exposed to toxic pesticides like DDT and endrin since then. Nineteen sixties officials from the government departments had to plead and cajole them to start using a pesticide. Since 1980, people living in the villages near and around the plantation found some abnormalities first in the environment and later in their own body and their new born babies for which they could not find any reason 1. In the ’90s it is realized that the spraying of pesticides in the cashew plantations near their homes could be the reason for the strange happenings 2. Environmental contaminants due to the intensive use of pesticides as modern agrochemical have created a lot of problem to the animal 3. In terms of biochemical and physiological alteration in their metabolism.

It exerts their impact at cellular and sub-cellular level prior to any gross sign of damage, being apparent in the morphology of the animal. Endosulfan is a group of organochlorine which has been used primarily to kill mosquitoes or different insects. Endosulfan enters into mammalian body through food chain or direct contact through inhalation leading to various physiological or metabolic dysfunctions including infertility.

India has a rich history of using plants for medicinal purposes. The Indian System of Medicine, viz Ayurveda, Siddha, Unani and Homeopathic system predominantly use plant-based raw materials for most of their preparations and formulations. Ashwagandha (Withania somnifera) is a medicinal plant extensively used in Ayurveda as home remedy for various diseases 4.

Animals: The mice were reared in our laboratory. The age group of mice selected for the study was 12 weeks old with 30±2 gm. b.w. 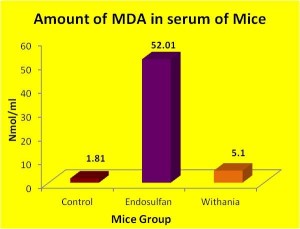 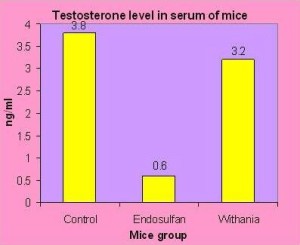 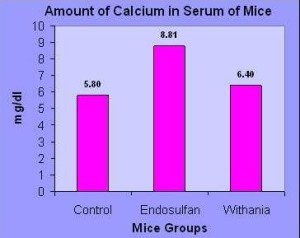 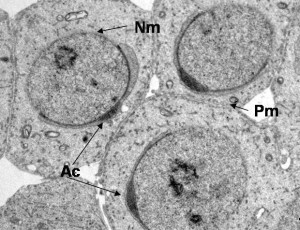 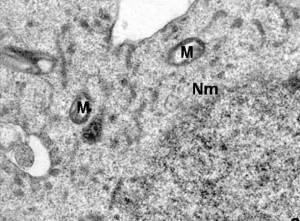 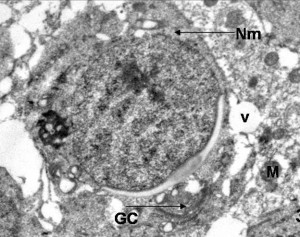 FIGURE 3: SHOWING DEGENERATION OF MITOCHONDRIA AS WELL AS GOLGI COMPLEX AFTER ENDOSULFAN TREATMENT 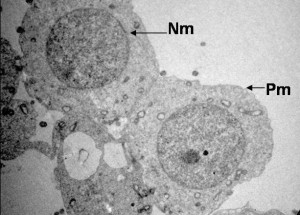 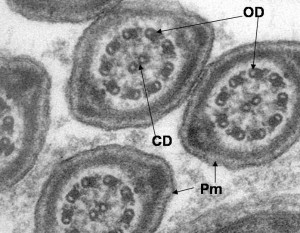 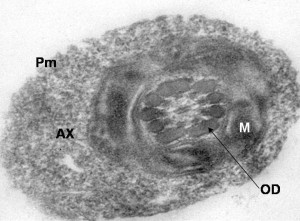 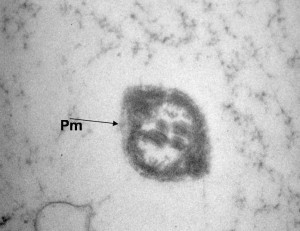 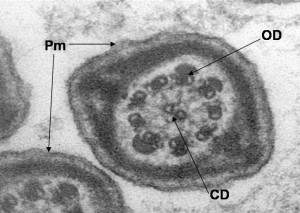 DISCUSSIONS: Endosulfan has also been shown to disrupt the reproductive endocrine system and affect reproduction 5. Several research groups have demonstrated the harmful effects of this pesticide on various organs such as liver and gonads 6.

Testosterone is made in the testes from cholesterol. The first step is to move cholesterol into the cell’s mitochondria, the energy generating organelles located in a cell’s liquid cytoplasm. A protein called steroidogenic acute regulatory protein (StAR) escorts cholesterol across the mitochondria’s membrane. An enzyme called cytochrome p 450 side-chain cleavage (p 450 sec) converts cholesterol into pregnenolone. A series of steps controlled by other enzymes change pregnenolone into testosterone 7. Testosterone level is found to be very low due to high amount of calcium released into serum. Testosterone is required for spermatogenesis while least testosterone level causes altered formation of spermatozoa.

It was found that Ca2+ stimulates respiration of mitochondria in a stoicheiometric and cyclic fashion, in such a manner that 2 Ca2+ ions yield the same amount of extra oxygen uptake as 1 molecule of ADP 8, 9. Accumulation of Ca2+ during electron transport is accompanied by H+ ejection 10, 11. Due to increase in calcium ion concentration in serum accumulation of calcium does not occurs inside mitochondria, it decreases electromotive force generated in mitochondria causing least formation of ATP. More ATP is needed for detoxification by SER (Smooth Endoplasmic Reticulum) but very least were formed causing degeneration of mitochondria due to toxicity.

In the etiology of male infertility, there is growing evidence that damage to spermatozoa by reactive oxygen species (ROS) play a key role 12. Spermatozoa contain large quantities of polyunsaturated fatty acids (PUFA). Therefore, they are susceptible to ROS-induced damage. It has been suggested that ROS induce membrane lipid per oxidation in sperm 13, 14, 15. MDA level was found increased many times indicates that lipids were oozes out from membranous system of cell causing degeneration of spermatozoa.

Depletion of lipid was observed from microtubule causing non motility in spermatozoa. It has been observed through electron microscopic photographs that mitochondrial membrane is degenerated of mid piece of spermatozoa which is mentioned earlier. This may be the reason that after administration of endosulfan the level of testosterone declined drastically compared with control causing infertility in male mice. Jung et al., 16 have studied the effect of medicinal plant extract on swimming capacity of spermatozoa of mice. Mathur et al., 4 have observed the effect of Withania somnifera root extracts on cell cycle and angiogenesis.

ACKNOWLEDGMENT: The authors are grateful to Mahavir Cancer Institute and Research Centre, Patna for providing research facilities and we are also thankful to all research laboratory staff and animal house staff for their proper support during study.