The present study of seventy one endophytic fungi isolated from Avicennia marina, Suaeda monica and Rhizophora mucronata plant leaf. Among 34 genera and 71 species was identified by Lactophenol cotton blue mounting techniques. To induce the biosynthesis of silver nanoparticles (AgNO3) using Aspergillus conicus, Penicillium janthinellum and Phomosis sp. And evaluate their antimicrobial potential. The characterization of silver nano particles on these fungi by FT-IR, UV, and Fre-SEM analysis to confirm the reduction and it is believed that protein might have played an important role in the stabilization of silver nanoparticles. The synthesized AgNO3 were found to be extracellular polydispersed spherical or hexagonal particles ranging from 6-12mm, 8-14mm 10-16mm in size. Antibacterial activity was performed using a Agar well diffusion method against Bacillus subtillus, E-coli, Enterobacter aurogens, Enterococcus, Klebseilla Pneumonia, Micrococus lutes, Salmonella typhi, Staphylococus aureus Streptococcus sp. Vibrio cholera. AgNO3 can be mycosynthesized extracelluraly using A.Conicus, Penicillium janthinellum and Phomosis sp. As the fungal system. Which is highly advantageous over chemical synthesis not only because in can be synthesized on a large scale, but because of the case of downstream processing and its biomedical activity.

INTRODUCTION: Nanotechnology is emerging field of science which involves synthesis and development of various nano materials. Silver compounds have also been used in the medical field to treat burns and a variety of infections. Commendable efforts have been made to explore this property using electron microscopy, which has revealed size, dependent interaction of silver nano particles with bacteria nano particles of silver have thus been studied as a medium for antibiotic delivery, and to synthesize composites for use as disinfecting filters and coating materials. However the bactericidal property of these nanoparticles depends on their stability in the growth medium, since this imparts greater retention time for bacterium nano particle interaction. There lies a strong challenge in preparing nanoparticles of silver stable enough to significantly restrict bacterial growth 1 (Li   et al., 2007).

Biologically synthesized silver nanoparticles have many applications, as in spectrally selected coatings for solar energy absorption, as intercelation material for electrical batteries, as optical receptors, as catalysts in chemical reactions and in bio-labelling.

Silver has been recognized to have inhibitory action on microbes present in medical and industrial process 2. (Lok et al., 2007). The most important application of silver and silver nanoparticles is in topical ointments to prevent infection against burn and open wounds. Chemical synthesis of nanopaticles leads to presence of traces of toxic chemical adsorbed on the surface which is undesirable in the medical applications of nanoparticles.

Isolation of Fungi: The plant leaf samples were surface sterilization and cut with 0.5 mm sized and were placed on potato dextrose Agar (PDA) and incubated at 300C for three days. Fungi was isolated from the mixed isolates from each plate and sub cultured on PDA. Sub culturing was continued until a pure isolate was obtained.

Characterization and Identification Isolates: Colonial morphology and microscopic examination of the various isolates of pure cultures were used to determine the reproductive and vegetative structures. Consequently, identification was done using onions 4 et al., (1981). Spore identification was achieved by reference to spore atlases of Gregory 5 (1973) Anna 6 (1990) and Ainsworth et al., (1973) 7.

Biosynthesis of Silver Nanoparticles: The fungal mat was washed thrice in deionized water to remove the unwanted material. Approximately 3.5 gm of fungal mat taken in a conical flask containing 100ml deionized water 10-1mM AgNO3 was added then it was incubated 37oC for 3 days. After incubation period observed colour change.

Ultra Violet Spectroscopy: The bioreduction of pour AgNO3 are monitored using UV-Vis spectroscopy at regular intervals. During the reduction, 0.1ml of samples was taken and diluted several times with Millipore water. After dilution, it was centrifuged at 800 rpm for 5 minutes. The supernatant was scanned by UV-300 spectrophotometer (UNICAM). For UV-Vis 1601 schimodzu spectrophotometer, operated at a resolution of 420 nm.

FT-IR (Fourier Transform Infrared Spectroscopy) FTIR analysis of bioactive TLC Fractions: A known weight of sample (1 mg) was taken in a mortar and pestle and ground with 2.5 mg of dry potassium bromide (KBr). The powder so obtained was filled in a 2 mm internal diameter micro-cup and loaded onto FTIR set at 26oC±1oC. The samples were scanned using infrared in the range of 4000-400cm-1 using Fourier Transform Infrared Spectrometer (Thermo Nicolet Model-6700). The spectral data obtained were compared with the reference chart to identify the functional groups present in the sample.

Scanning Electron Microscopy (SEM): For SEM, the silver nanoparticle synthesized using Fungi was allowed to was allowed to dry completely and grounded well to a powder specimen is normally required to be completely dry. Since the specimen is at high vacuum. Living cells and tissues and whole, soft-bodied organisms usually require chemical fixation to preserve and stabilize.

Fixation is usually performed by incubation in a solution of a buffered chemical fixative, such as glutraldehyde. The fixed tissue is then dehydrated. The dry specimen was mounted on a specimen stub using and adhesive which as epoxy resin or electrically- conductive double-sided adhesive tape and sputter coated with gold palladium alloy before examination in the microscope.

Preparation of Extract: 1 gm of silver nanoparticle synthesizing fungi were kept in the 10ml of organic solvent namely aqueous, n-Butanol and methanol, silver nanoparticle synthesizing fungi was grounded well with the help of mortar and pestle. The grained fungi was filtered through whatmann No.1 filter paper and the supernatant was collected, and stored for Antibacterial screening purpose.

Screening of Antibacterial Activity:            The antibacterial activity of the aqueous and organic solvents (n-butanol and methanol) extracts from the normal strain and silver nanoparticle synthesized strain (Aspergillus conicus, Penicillium Janthinellum, Phomosis sp) were tested against the selected human pathogenic bacteria. The sterilized Nutrient agar medium was poured into each sterile petriplate and allowed to solidify using a sterile cotton swab. Fresh bacterial culture was spread over the plates by following spread plate technique. A well was cut on the solidified agar. The solvent extract was added into the each well. All the plates were incubated at 37oC for 24-48hrs. After the inclubation, the zone of inhibition was observed.

RESULT AND DISCUSSION: The present study, number of fungi isolated from the plant leaf sample. Among the fungi isolated, seventy one identified. Among the identified isolates, only three fungi culture namely A.conicus, Penicillium janthinellum and Phomosis were predominantly found. A. conicus, Penicillium  janthinellum and Phomosis were selected for the biosynthesis of silver nanoparticles abilities.

This fungus dominantly presented in mangroves plant leaf sample so it was selected further study.

Identifications of functional group using FT-IR: FT-IR measurements of the freeze dried samples were carried out to identify the possible interactions between silver and bioactive molecules, which may be responsible for synthesis and stabilization (capping material) of silver nanoparticles. The amide linkages between amino acid residues in proteins give rise to well known signatures in the infrared region of electromagnetic spectrum (Fig. 1). 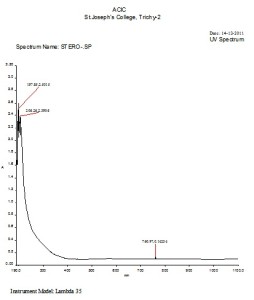 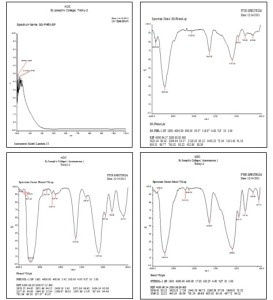 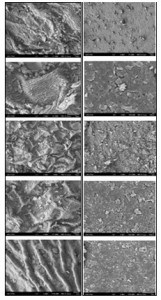 TABLE 2: DETECTION OF VARIOUS FUNCTIONAL GROUPS BY FT-IR FROM A. CONICUS, PENICILLIUM JANTHINELLUM AND PHOMOSIS