INTRODUCTION: Low-dimensional nanoscale materials are currently of great interest due to their unique biological and optical properties and considered as an efficient building blocks and new comprehensive models of the next generation of technology with application in therapeutics and diagnostics. Nanoparticles of Metal oxide are receiving attention in a large variety of biomedical applications like antimicrobials 1 Antibacterial 2 - 4 antitumor activity 5 and anticancer activity 6. Researchers have recommended the use of copper ions in hospitals as superior disinfectants for waste water containing infectious microorganisms 7.

However, residual copper ions in the treated water may adversely affect human health 8. The emergence of Nano-biotechnology presents opportunities for exploring the microbicidal effect due to unique chemical and biological properties of metal nanoparticles. The microbicidal effect of metal nanoparticles has been recognized to their small size and high surface to volume ratio, which allows them to interact closely with bacterial surface 9. Metal nanoparticles with bactericidal activity can be immobilized and coated on to surfaces, which may find application in various fields, i.e. medical instruments and devices, gas sensors, catalytic processes, high temperature superconductors, solar cell and preservative 10-13.

Although only a limited article have been reported the antibacterial properties of copper oxide nanoparticles (CuO NPs), they show CuO NPs have a significant promise as bactericidal agent 14. Yoon et al., reported the antibacterial effects of Cuo NPs using single representative strains of E. coli and Bacillus subtilis 15. Cuo NPs supported on various suitable materials, such as carbon, polyurethane foam, polymers and sepiolite have also been effectively used for bactericidal applications 16-21.

Although, various physical and chemical process have been extensively used to produce CuO NPs. The use of toxic chemicals on the surface of NPs and non-polar solvents in the synthesis procedure limits their applications in medical fields. Therefore, the interest in this field has shifted toward ‘green’ chemistry approach to development of clean, biocompatible, nontoxic and eco-friendly protocol for NPs synthesis. These approaches focus on utilization of environment benign, cost effective and biocompatible reducing and capping agents for synthesis of CuO NPs. Review of literature revealed that biological synthesis of CuO NPs has been unexplored; there are only a very few reports on the use of microorganisms or plant extract for synthesizing CuO NPs 22 - 24. Therefore, in the present study, attempts were made to utilize the potential of cell-free extracts of S. platensis as a bio-factory for the CuO NPs synthesis.

Preparation of Microalgal Extract: Typically, 5 g (dry weight) S. platensis biomass was suspended in 100 ml of double distilled sterile water for 15 min at 100 °C in an Erlenmeyer flask. After boiling, the mixture was cooled and centrifuged at 10,000 rpm for 15 min. Supernatant was collected and was stored at 4 °C for further analysis 27.

Biosynthesis of Copper Oxide Nanoparticles: In the typically synthesis process of Copper Oxide nanoparticles, add 2 ml of S. platensis extracts drop wise into the 100 ml of 1mM of copper (II) acetate [Cu(CH3COO)2⋅H2O] solution in 250 ml conical flask. The reaction mixture was kept at 100 °C -120 °C temperature under constant mechanically stirring. After few hours, the deep blue solution gradually became colourless and then turned slowly to brick red which changed to dark brown after vigorous stirring for 24 h. The colour change was noted and nanoparticles formation was monitored using UV-vis Spectrophotometer. The synthesized CuO NPs were centrifuged at 15,000 rpm for 20 min at 4 °C, and collect the pellet. The pellet was washed with distilled water for several times to remove impurities and 90% ethanol to get pure CuO NPs powder.

Antibacterial Activity of CuONPs: 100 μl of bacterial suspension with optical density 0.5 at 595 nm correspond to 1×108 CFU/ ml was prepared in an isotonic NaCl (0.85%) solution. Furthermore, this solution was diluted ten times (1×107 CFU/ml) and used as inoculums. 100 μl of bacterial suspension was prepared and inoculated on Mueller - Hinton Agar-II (MHA-II) plates by spread plate technique. The sterile disc of 6 mm in diameter (Hi-Media Laboratories Pvt. Ltd.) was impregnated with 50 μl of 1 mg/ml solution of CuO nanoparticles in deionized water. The discs were evaporated at room temperature for 24 hours. Aqueous extract of S. platensis used as negative control and Gentamycin (10 μg/disc) was used as positive control. The discs were gently pressed on MHA Petri Plates and incubated at 37 °C for 24 hours. The zone of inhibition in the diameter of each disc was measured in millimeter (mm) using a Hi-Media Laboratories Pvt. Ltd. zone scale. The experiments were done in four replicates and mean values of ZOI were reported. The CuO NPs prepared by S. platensis  were used to evaluate antibacterial activity against Gram (-) and Gram (+) Bacteria (Escherichia coli - MTCC-9721, Proteus vulgaris - MTCC-7299, Klebsiella pneumonia - MTCC-9751, Staphylococcus aureus - MTCC-9542, S. epidermidid - MTCC- 2639, Bacillus cereus - MTCC-9017) on MHA plates by Kirby- Bauer disk diffusion method 28.

RESULTS AND DISCUSSION: The formation of CuO NPs was initially confirmed visually and by using UV–visible spectroscopy technique which has been frequently used to characterize the synthesized metal and metal oxide nanoparticles. The change in color of the reaction mixture due to surface plasmon resonance to indicate the formation of CONPs in the reaction mixture 29 (Fig. 1).

Fig. 2 shows the UV–vis absorption spectra recorded for CuO NPs and resonance at about 259 nm which are attributed to the formation cupric oxide nanoparticles (CuO) 30. The shape and size of the resultant particles were elucidated by SEM and TEM analysis. Nanoparticles observed from the micrograph are spherical particles. It is observed that there is a variation in particle size ranged from 30 to 40 nm in size (Fig. 3: a and b). 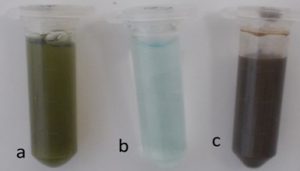 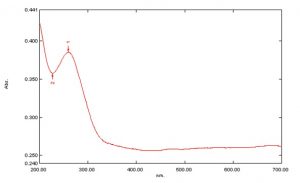 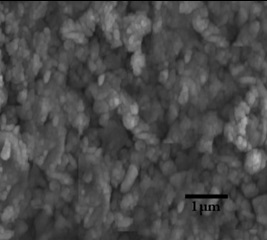 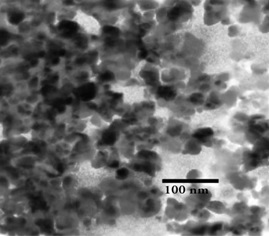 FIG. 3: (A) THE SEM IMAGES (B) TEM IMAGE OF CuO NPS SYNTHESIZED BY CELL FREE EXTRACTS OF S. PLATENSIS

Antibacterial Activity of CuO Nanoparticles: The antibacterial activity of alga extract and CuO NPs was examined against both Gram-negative and Gram-positive bacteria by using disc diffusion method. The study revealed that CuO NPs (50 µg/100 µL) had shown maximum inhibitory effect against Proteus vulgaris MTCC-7299 and The radial diameter of the zone of inhibition found to be 28.0 ± 0.41 mm, followed by Bacillus cereus - MTCC-9017 (27.0 ± 1.47), S. epidermidis - MTCC- 2639 (24.0 ± 0.91), Staphylococcus aureus - MTCC-9542 (23.8 ± 0.48), Staphylococcus aureus - MTCC-9542, Klebsiella pneumonia - MTCC-9751 (23.3 ± 1.11) and Escherichia coli - MTCC-9721 i.e. 21.3 ± 0.85 (Fig. 4: a-f). Based on these results, it can be concluded that these synthesized CuO NPs had significant antibacterial action on both of the Gram - positive and Gram -negative bacteria, which may be recognized to the greater abundance of carboxyl and amines groups on bacterial cell surface and greater affinity of released copper ions toward these groups 31. CuO NPs show competent antibacterial property due to their enormously large surface area, which provides superior contact with microorganisms. Copper ions released consequently may bind with DNA molecules which lead to degrade the helical structure by cross-linking within and between the nucleic acid strands. Cu-NPs were found to cause multiple toxic effects such as generation of reactive oxygen species, protein oxidation, and lipid peroxidation and also disrupt biochemical processes 21, 32. 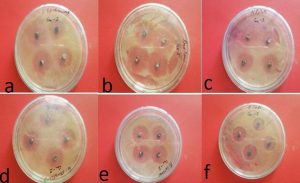 CONCLUSION: In the present work, we report an eco-benign and convenient method for the synthesis of CuO NPs using cell free aqueous extract of S. platensis. The developed nanoparticles were characterized by UV–vis spectroscopy, TEM, XRD and FTIR measurements and showed good antibacterial activity against both Gram-negative and Gram-positive bacteria. An important potential benefit has numerous benefits i.e. non-toxic, cost effective, rapid reduction, economic viability. This biosynthesis method can be a promising method for the preparation of other metals and metaloxide nanoparticles and can be valuable in environmental, biotechnological, pharmaceutical and medical applications. Future prospects of this research would be to large scale production of CuO NPs using S. platensis and to ascertain its efficacy against wide spectrum of microbial population. Further investigations would involved is covering the potency of S. platensis to synthesize copper nanoparticles.

CONFLICT OF INTEREST: The author declares that there is no conflict of interest regarding the publication of this article.