INTRODUCTION: Attention-deficit / hyper-activity disorder (ADHD) is a neurobehavioural condition resulting in impairment of concentration, impulsivity and cognitive processing. The symp-tomology of ADHD was initially believed to be caused by brain damage from illness or traumatic injury. But functional and structural studies of the ADHD brain compared with the typical brain showed an activity deficit in the prefrontal cortex. The prefrontal cortex in the brain is known for its involvement in working, attention, organization, constraint, and impulsivity, all of which can be impaired in the individual with ADHD.

ADHD always begins in childhood, and symptoms may continue beyond adolescence. The symptoms of ADHD include anxiety, depression, emotional trauma, bipolar disorder, and many other psychological disorders 1. Delivery of drugs to the central nervous system (CNS) remains a challenge in the development of therapeutic agents for central targets due to the impenetrable nature of the drugs through the blood-brain barrier (BBB).

The BBB blocks the substrate penetration based on several characteristics, including lipophilicity, molecular size, and specificity for a variety of ATP-dependent transport systems. Injection of dyes in the ventricles of rabbits and monkeys showed that the cerebrospinal fluid (CSF) is drained via the olfactory neurons, originating from the olfactory bulb and connect the brain with the nasal cavity by penetrating the cribriform plate, which brings the neurons into the nasal mucosa. This coined the idea that this transport route could also exist in the opposite direction that would imply direct access from the nasal cavity to the brain and thus circumventing the BBB 2. In recent years, vesicular systems became a formulation scientist’s choice in drug delivery. Lipid vesicles were found to be of value in immunology, membrane biology, and diagnostic techniques along with targeted drug delivery systems (especially brain). They enhance effective drug permeation into cells, prolonged existence of drugs in the systemic circulation, selective uptake by reducing toxicity, effective for treating intracellular infections, sustains drug release, and lessens the therapeutic cost 3.

Fatty acid vesicles nowadays are widely used for the brain targeting drug delivery systems, mainly for the drugs that is unable to cross the BBB due to their physical characteristics 4. They are useful as carriers for the oral administration of poorly absorbable drugs, drugs that are unable to cross BBB, drugs having hindrance for passing through stratum corneum, and for the horizontal transfer of genes from plants.

This study's prime objective was to prepare, characterize, and evaluate the capability of fatty acid vesicles as a base component for nanocarrier development to deliver highly water-soluble drugs into the brain across BBB in a sustained manner. Further, its efficiency was evaluated by performing ex-vivo studies.

Preparation of Fatty Acid Vesicles by Reverse Phase Evaporation Method: Reverse phase evaporation method is used for the preparation of fatty acid vesicles. The organic phase (phospholipid, fatty acid, and organic solvent) and the aqueous phase (drug and buffer) in respected ratios were mixed and probe sonicated to form o/w emulsion. Then the emulsion formed is evaporated by rotavap to get viscous gel formulation. The gel formulation is mixed with 20 ml buffer and bath sonicated to form fine dispersion. The obtained vesicles were ultrasonicated and sized subsequently by polycarbonate membrane 5.

Experimental Design: Full factorial design method was used to optimize the fatty acid vesicular formulation. A factorial design is an effective method in indicating the relative significance of several variables and their interactions.

In this experimental design, the number of experi-ments required for studying the significance of variables and their interactions is dependent on the number of independent variables selected 6.

A 32 full factorial design was utilized in the optimization study. In the design, two factors were evaluated each at three levels, and experimental trials were carried out at nine possible com-binations. The design layout and coded value of the independent factor are shown in Table 1.

Potassium bromide (KBr) disks were prepared by mixing a few mg of a sample with potassium bromide and by compacting that in a hydrostatic press under vacuum at 6-8 tons pressure. Then the resultant disc was mounted in a suitable holder in IR spectrophotometer, and the IR spectrum was recorded from 4000 cm-1 to 200 cm-1. The resultant spectrum was compared for any spectral changes. The spectra were observed for the presence of characteristic peaks for the respective functional group in the compound.

Entrapment Efficiency: Fatty acid vesicular formulation of about 1.5 ml was transferred into Eppendorf tubes. Then it was centrifuged for 30 minutes at 4 °C at 8,000 rpm for two cycles, followed by 15 minutes at 6,000 rpm for one cycle to separate free drug and atomoxetine HCl loaded fatty acid vesicles. The clear fraction was used to determine the un-entrapped drug with the following formula 7.

Vesicle Shape: Fatty acid vesicles can be easily visualized by using scanning electron microscopy (SEM). A scanning electron microscope or SEM is a powerful microscope that uses electrons to form an image and allows for imaging of conductive samples at magnifications that cannot be achieved using traditional microscopes 8. As the SEM doesn’t use light to create images, the resulting pictures it forms are colorless (black & white). SEM was performed for the optimized formulation for determining the surface morphology, size, and shape of the formulation.

Vesicle size and Zeta Potential: The particle size of the fatty acid vesicles can be determined by dynamic light scattering (DLS). Particle size can be determined by measuring the random changes in the intensity of light that is scattered from a suspension or solution. Small particles in suspension undergo random thermal motion, which is known as Brownian motion. The Zeta potential of the formulation was measured by Zetasizer. The electrophoretic light scattering method was utilized for zeta potential measurement. A dip cell (zen1002, Malvern Instruments) with a pair of parallel Pd electrodes was used to provide an electrical trigger on charged particles. The signals were collected at 12.8º, and the data were analyzed using Zetasizer software.

In-vitro Diffusion Studies (Dialysis Membrane): Diffusion studies were performed using two sides open-ended boiling tube. The boiling tube acts as a donor compartment, and the receptor compartment was a beaker of volume 250 ml. The dialysis membrane used for diffusion studies was placed between donor and receptor compartment 9. The fatty acid vesicular suspension was added to the membrane and clamped together. The receptor compartment was filled with pH 6.4 phosphate buffer saline and maintained by continuous stirring at 50 rpm with a magnetic bead and maintained at 37 ºC. At pre-determined time intervals, 1ml samples were withdrawn and replaced with an equal volume of buffer. The samples were analyzed after appropriate dilution at λmax of 273 using a spectrophotometer.

Ex-vivo Permeation Studies (Nasal Mucosa): Ex-vivo drug permeation study was carried out for the optimized formulations. Fresh nasal tissue was removed from the nasal cavity of the goat obtained from a local slaughterhouse. The mucosal tissue was stored in saline water in frozen conditions. It was placed in between the donor and the receptor compartment, and above same procedure was followed. Ex-vivo permeation rate studies such as % drug release, steady-state flux (SSTF) for atomoxetine HClwere calculated 10.

Release Kinetics: Various models like linear and non-linear kinetic models that are dependent on the curve fitting procedure were tested for explaining the kinetics of drug release. To analyze the dosage form's drug release rate kinetics,  the obtained data was fitted into zero-order, first-order, Higuchi, and Korsmeyer peppas release model, to study the drug release from the dosage form. The dissolution profiles of the optimized formulations were subjected to zero-order, first-order, Higuchi, and Korsmeyer peppas models to ascertain the kinetic modeling of drug release.

Drug Excipient Compatibility Studies: The FTIR spectra of formulation with fatty acids and phospholipids reveal no interaction between drug and excipient; both the drug and excipient peaks were identified and interpreted in spectra 11. The spectra confirmed the absence of any chemical interaction between the drug, fatty acids, and phospholipids. Thus, it can be concluded that the pure drug is not altered functionally and compatible with excipients in the optimized formulation prepared.

FIG. 1: FTIR SPECTRA OF PURE DRUG (A) AND OPTIMIZED FORMULATION (B) 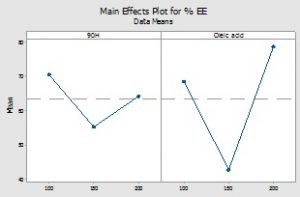 Vesicle Size Analysis and Zeta Potential: The vesicles obtained had a diameter of 152.9 ± 90.03 d. nm and the polydispersity index 0.381, indicating that the optimized formulation is polydisperse in nature.

The particle size analysis revealed that the fatty acid vesicles were nano-size, which is an ideal characteristic for the brain's targeted delivery of the drug 14.

It was found that with a decrease in the particle size, the penetration ability of the encapsulated drug increases. Therefore, the size of the vesicles is an important character that ensures a positive outcome of the preparation. Zeta potential was found to be -9.41 mV indicating that the formulation stable. The negative charge on the particle may be due to ethanol's presence in the sample, which prevents vesicle aggregation due to electrostatic repulsion, ensuring the stability of fatty acid vesicular dispersion and avoidance of aggregation of the vesicles 15.

FIG. 4: PARTICLE SIZE ANALYSIS (A) AND ZETA POTENTIAL (B) OF OPTIMIZED FORMULATION (F8)

Ex-vivo Diffusion Studies: Results of permeation studies are shown in Fig. 6. The cumulative amount of drug permeated in 4 h from the pure drug was 3278. 061 ± 0.03 while from vesicular dispersion was 1278.432 ± 0.21. Drug permeated from vesicular dispersion was low because maybe fatty acid vesicles increased the accumulation of the drug in the mucosal layer and thus decreased the permeation of the drug through the mucosa. Drug permeated from the pure drug was very high because it is in free form for penetration.

The drug release of nasal mucosa when compared to dialysis membrane was less; the reason was attributed to the high thickness of nasal mucosa. Slow drug permeation from vesicular dispersion indicates the release of drugs in a sustained manner for a prolonged period of time from fatty acid vesicles.

Further, for many other CNS drugs that cannot cross BBB sufficiently, the developed formulation of fatty acid vesicles may be a suitable option to carry those drugs into the brain for better therapeutic management of CNS disorders.

CONFLICTS OF INTEREST:
The authors declare that there was no conflicting interest.