INTRODUCTION: All chromatographic methods -with the exception of TLC- use columns for the separation process. Column chromatography has found its place in many laboratories for preparative purposes as well as for reaction control in organic syntheses. The importance of column chromatography is mainly due to following factors:

In traditional column chromatography a sample to be purified is placed on the top of a column containing some solid support, often silica gel. The rest of the column is then filled with a solvent (or mixture of solvents) which then runs through the solid support under the force of gravity. The various components to be separated travel through the column at different rates and then can be collected separately as they emerge from the bottom of the column. Unfortunately, the rate at which the solvent percolates through the column is slow. In flash chromatography however air pressure is used to speed up the flow of solvent, dramatically decreasing the time needed to purify the sample, therefore making the column and running the separation could take less than 10-15 minutes.

Flash chromatography differs from the conventional technique in two ways: first, slightly smaller silica gel particles (250-400 mesh) are used, and second, due to restricted flow of solvent caused by the small gel particles, pressurized gas (ca. 10-15 psi) is used to drive the solvent through the column of stationary phase. The net result is a rapid (“over in a flash”) and high resolution chromatography.

The absorbent has a much smaller particle size (about the same as that on TLC plate). There are many different of kinds of chromatographic columns. If the column contains a porous plate to support packing, no additional support such as cotton, glasswool and sand is necessary 1.

It classified into two types 2:

Automated flash chromatography systems include components normally found on more expensive HPLC systems such as a gradient pump, sample injection ports, a UV detector and a fraction collector to collect the eluent. Typically these automated systems separate samples from a few milligrams up to an industrial kg scale and offer much cheaper and quicker solution to doing multiple injections on prep-HPLC systems.

The software controlling an automated system  coordinate the components, allow a user to only collect the factions that contain their target compound (assuming they are detectable on the system's detector) and help the user to find the resulting purified material within the fraction collector. The software also saves the resulting chromatograph from the process for archival and/or later recall purposes.

Principle 3: The principle is that the eluent is, under gas pressure (normally nitrogen or compressed air) rapidly pushed through a short glass column with large inner diameter. The glass column is packed with an adsorbent of defined particle size. The most used stationary phase is silica gel 40 – 63 µm, but obviously packing with other particle sizes can be used as well.

Particles smaller than 25 µm should only be used with very low viscosity mobile phases, because otherwise the flow rate would be very low. Normally gel beds are about 15 cm high with working pressures of 1.5 – 2.0 bars. Originally only unmodified silica was used as the stationary phase, so that only normal phase chromatography was possible. In the meantime, however, and parallel to HPLC, reversed phase materials are used more frequently in flash chromatography.

Sorbent Selection 1, 4: The basic prerequisite for successful separations is the choice of the proper adsorbent. The most important stationary phase in column chromatography is silica. Silica gel (SiO2) and alumina (Al2O3) are two adsorbents commonly used by the organic chemist for column chromatography. These adsorbents are sold in different mesh sizes, as indicated by a number on the bottle label: “silica gel 60” or “silica gel 230-400” is a couple examples. This number refers to the mesh of the sieve used to size the silica, specifically, the number of holes in the mesh or sieve through which the crude silica particle mixture is passed in the manufacturing process.

These are some adsorbents which are mainly used in flash chromatography 5:

Solvent Systems 1, 5: Flash column chromatography is usually carried out with a mixture of two solvents, with a polar and a nonpolar component. Occasionally, just one solvent can be use. The only appropriate one-component solvent systems (listed from the least polar to the most polar):

The most common two-component solvent systems (listed from the least polar to the most polar):

Higher polarity of solvent increases rate of elution for all compounds. If your Rf is a ≈0.2, you will need a volume of solvent ≈5X the volume of the dry silica gel in order to run your column.

TABLE 2: TYPICAL VOLUME OF ELUANT REQUIRED FOR PACKING AND ELUTION

* Typical Volume required for equilibrium of the column and elution

SINGLE Step Flash Columns (patented) represent an innovative step forward in chromatography. Flash Chromatography is a quick and inexpensive technique for the purification of organic compounds. Thomson flash columns come in a wide variety of sizes ranging from 4g to 300g silica-based for easy scalability of synthetic reactions. Thomson also offers other packing material like Amine and C18 flash columns which enable the end-user to utilize these flash columns for a broad range of reactions 8.

Packing the Column 1: Obtain a glass column and make sure that it has either a glass frit or a plug of cotton wool directly above the stopcock to prevent the silica gel from escaping from the column through the stopcock. (IF it doesn’t have either, we have to put in a somewhat loosely stuffed plug of cotton wool; if we stuff it too much; solvent flow becomes painfully slow even with air pressure above the column).

Next, put a ~1/2 inch layer of clean sand above the plug of glass wool. Use only as much as is necessary to obtain a flat surface, with the same diameter as that of the body of the column. Make sure the surface is flat. Add dry silica gel adsorbent, 230-400 mesh   usually the jar is labeled "for flash chromatography." One way to fill the column is to invert it into the jar of silica gel and scoop it out & then tamps it down before scooping more out (fig.1). 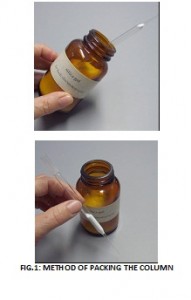 FIG.1: METHOD OF PACKING THE COLUMN 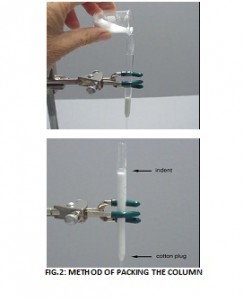 FIG.2: METHOD OF PACKING THE COLUMN

Load the sample onto the silica gel column 9: Two different methods are used to load the column: the wet method and the dry method: wet and dry. Below are illustrations of both methods of loading a crude sample of ferrocene onto a column.

Wet Loading Method: In the wet method, the sample to be purified (or separated into components) is dissolved in a small amount of solvent, such as hexanes, acetone, or other solvent. This solution is loaded onto the column. Sometimes the solvent of choice to load the sample onto the column is more polar than the eluting solvents. In this case, if we use the wet method of column loading, it is critical that we only use a few drops of solvent to load the sample. If we use too much solvent, the loading solvent will interfere with the elution and hence the purification or separation of the mixture. In such cases, the dry method of column loading is recommended.

Dry Loading Method: First dissolve the sample to be analyzed in the minimum amount of solvent and add about 100 mg of silica gel. Swirl the mixture until the solvent evaporates and only a dry powder remains. Place the dry powder on a folded piece of weighing paper and transfer it to the top of the prepared column. Add fresh eluting solvent to the top now we are ready to begin the elution process.

Elute the column 9: Add a good part of our elution solvent to the column. Apply pressure to force the solvent through the column by pressing on the top of the Pasteur pipette with a pipette bulb. Only force the solvent to the very top of the silica: do not let the silica go dry. Add fresh solvent as necessary. The pressure should be the minimum necessary to keep a steady stream coming out of the column. Fig. 3 shows the colored compound as it moves through the column after successive applications of the pipette bulb process. The last two photos illustrate collection of the colored sample. Note that the collection beaker is changed as soon as the colored compound begins to elute. The process is complicated if the compound is not colored. In such experiments, equal sized fractions are collected sequentially and carefully labeled for later analysis.

Cleaning the Column 1, 5: Flush all the remaining solvent out of the column using pressurized gas. Flowing air through the column for ~2 hours will give dry, free flowing silica gel. Pour out the contents of the column into the silica waste container. In most cases, washing the column with water and acetone is sufficient. If necessary, a small amount of liquid soap can be used. When all liquid solvent has bee removed from the reservoir, remove the last remnants of solvent by applying a vacuum (from aspirator) to the bottom of the column. Try to avoid scratching the columns with abrasive brushes or soaps.

General procedure 1: First a low viscosity solvent system (e.g. ethyl acetate/30-60°C petroleum ether) is found which separates the mixture and moves the desired component on analytical TLC to an Rf of 0.35. If several compounds are to be separated which run very close on TLC, adjust the solvent to put the midpoint between the components at Rf = 0.35. If the compounds are widely separated, adjust the Rf of the less mobile component to 0.35.

Having chosen the solvent, a column of the appropriate diameter (Table 1) is selected. Dry 40-63 mm silica gel is poured into the column in a single portion to give a depth of 5.5-6 in. With the stopcock open, the column is gently tapped vertically on the bench top to pack the gel. Next a 1/8 [to 1/4] in. layer of sand is carefully placed on the flat top of the silica gel bed and the column is clamped for pressure packing and elution.

The solvent chosen above is then poured carefully over the sand to fill the column completely (Air pressure is then applied by holding the cork containing the air line on the top of the column). This cause the pressure above the absorbent bed to climb rapidly and compress the silica gel as solvent is rapidly forced through the column. It is important to maintain the pressure until all the air is expelled and the lower part of the column is cool; otherwise, the column will fragment and should be repacked unless the separation desired is a trivial one.

Fractions are collected until all the solvent has been used (see Table 1 to estimate the amount of solvent and fraction size). It is best not to let the column run dry since further elution is occasionally necessary. Purified components are identified by TLC and the appropriate fractions are combined and the solvent removed by rotary evaporation to yield the desired material. If the foregoing instructions are followed exactly, there is little opportunity for the separation to fail.

Column Chromatography vs. Flash Chromatography 6: In the example below, an 8 hours glass column chromatography run was separated in just 50 minutes using a 40mm ID flash cartridge. In this case there were no mixed fractions either (fig.4). 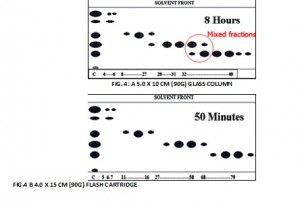 CONCLUSION: Flash Chromatography is a simple, fast, cost effective Preparative Liquid Chromatography approach. Separations are based upon traditionally obtained TLC results which are simply extrapolated to preparative scale.Flash chromatography is very useful technique for quickly separating increasing quantities of samples. It is predictable and easy to scale up and down as required. Modern instrumentation is making it easier still to take full control over the separation and the technique continues to develop quickly.