The buccal mucosa has been investigated for local drug therapy and the systemic delivery of therapeutic peptides and other drugs that are subjected to first-pass metabolism or are unstable within the rest of the gastrointestinal tract. The mucosa of the oral cavity presents a formidable barrier to drug penetration, and one method of optimizing drug delivery is by the use of adhesive dosage forms and the mucosa has a rich blood supply and it is relatively permeable. The buccal mucosa is very suitable for a bioadhesion system because of a smooth and relatively immobile surface and accessibility. Therefore, drugs with a short biological half life, requiring a sustained released effect and exhibiting poor permeability, sensitivity to enzymatic degradation, or poor solubility may be good candidates to deliver via the oral cavity. To overcome the drawbacks of tablets flexible patches for use in the mouth have been developed. Erodible and non-erodible adhesive films have been used as bioadhesive films. These adhesive patches for oral mucosal delivery can be used to designed uni or bidirectional systems for buccal tissue absorption.The objective of this article is to review buccal drug delivery of patches (films) by discussing buccal mucosa and pathways of drug absorption and their formulations.

INTRODUCTION:Within the oral mucosal cavity, the buccal region offers an attractive route of administration for controlled systemic drug delivery. Buccal delivery is the administration of drugs through the mucosal membrane lining the cheeks. Although the sublingual mucosa is known to be more permeable than the buccal mucosa, the latter is the preferred route for systemic transmucosal drug delivery. This is because the buccal mucosa has an expanse of smooth muscle and relatively immobile mucosa, which makes it a more desirable region for retentive systems. Thus, the buccal mucosa is more appropriate for sustained delivery of less permeable molecules and peptide drugs 1.

Buccal Dosage form can be of;

Structure of Oral Mucosa: The oral mucosa is comprised of squamous stratified (layered)epithelium, basement membrane, the lamina propria and submucosa. It also contains many sensory receptors including the taste receptors of the tongue. 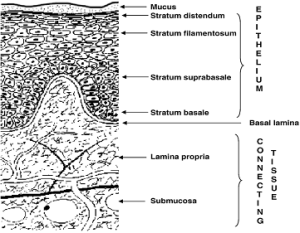 Buccal Mucosa and Pathways of Drug Absorption: The buccal mucosal tissues consist of a multilayered, stratified squamous epithelium covered with mucous. The epithelium of the buccal mucosa is about 40-50 cell layers thick, while that of the sublingual mucosa contains somewhat fewer layers 3. The epithelial cells increase in size and become flatter as the travel from the basal layers to the superficial layers. The basal lamina connects the epithelium to a connective tissue layer, the lamina propriya 4. The thickness of the buccal mucosa is about 500-800 µm. the buccal epithelium is not keratinized and has small amounts of ceramide, neutral but polar lipids and cholesterol sulfate in the intercellular lipid region.

Buccal epithelia have been found to be considerably more permeable to water than keratinized epithelia present in other regions of the oral mucosa 5. Apart from the intercellular lipids, the basement membrane may present some resistance to permeation as well. The basic drugs transport mechanism for the buccal epithelium is the same as that for other epithelia in the body. Two major routes are involved: Transcellular (intracellular) and Paracellular (intercellular) 6.

The transcellular route may involve permeation across the apical cell membrane, intracellular space and basolateral membrane either by passive transport (diffusion, PH partition) or by active transport (facilitated and carrier-mediated diffusion, endocytosis). The transcellular permeability of a drug is a complex function of various physicochemical properties including size, lipophilicity, hydrogen bond potential, charge and conformation. Transportation through aqueous pores in the cell membranes of the epithelium is also possible for substances with low molar volume (80 cm3/mol) 7.

Buccal Drug Delivery Systems: Hydrogels are hypdrophilic polymeric matrices that are capable of swelling when placed in aqueous media. These include natural gums and cellulose derivatives. They swell infinitely and the component molecules dissolve from the surface of the matrix. Drug release then occurs through the spaces or channels within the network as well as through the dissolution and /or disintegration of the matrix. Often, hydrogels are across -linked so that they do not dissolve in the medium and only absorb water 9.

Multilayered tablets are one of the commonly employed dosage forms. They can circumvent the relatively short residence time of oral gels on the mucosa, which are easily washed and removed by saliva. Unlike conventional tablets, they lack a disintegrating agent and tend to remain intact during the drug release period. Generally, the buccal tablets have a drug-incorporated polymeric matrix with a backing impermeable membrane. The drug-releasing surface is placed on the mucosal surface and the backing membrane faces the oral cavity. The rate of release from such systems is usually diffusion controlled. Buccal tablets are considered relatively bulky when compared to buccal films 10.

Striant is a monoconvex, tablet-like, mucoadhesive buccal system recently approved by United States food and drug administration (FDA). Striant adheres to the gum tissue above the incisors, with the flat surface facing the check mucosa. The active ingredient in striant is testosterone. Insertion of striant twice a day, in the morning and in the evening, provides continuous systemic delivery of testosterone.

Buccal films are preferred to adhesive tablets because of their flexibility and comfort. Moreover, they are also suitable for protecting wound surfaces, thus reducing pain and increasing the effectiveness of treatment. Buccal films or patches are designed either as matrix-controlled or membrane-controlled devices. Some biodegradable or erodible formulations for the timed release of drugs are being investigated.

Atrix laboratories, Colorado, USA have developed Bio-erodible Mucoadhesive (BEMA) technology, which is designed to deliver either local or systemic levels of drugs across mucosal tissues. The BEMA system consists of a small disc with bio-erodible layers that can deliver drugs rapidly at specified time intervals. The BEMA disc adheres to the buccal mucosa and delivers the drug into the mucosa as the disc erodes in the mouth 12.

The different components of Buccal Mucoadhesive Patches are as following:

Following are the critical properties for candidature to Buccal Mucoadhesive Drug Delivery:

The adhesion of materials with mucosa can be considered as the result of the following steps: Polymer hydration, wetting of mucosa, diffusion into the mucus and chemical bonding with glycoprotein.  Hydrated polymer wets the mucus when interatomic and intermolecular forces occur at the interface. The formulation of an assembly is determined by a liquid -solid contact step and thus, the criteria of good wetting and free energy of interaction between the two materials should be considered.

After the initial contact between the hydrated polymer and the mucus, the mucoadhesion strength is determined by the formation of secondary chemical bonds due to polymer chain/mucin interpenetration, which is affected by polymer flexibility and mobility. Hence, the ideal bioadhesive polymer should have satisfactory surface energy and chain flexibility favouring its spread and diffusion into the mucus and functional groups forming secondary chemical bonds (for examples, ionic and hydrogen bonds) 14.

Appropriate materials for bioadhesion are mostly hydrogel-forming polymers that are cellulose derivatives such as sodium carboxymethylcellulose, methylcellulose, methyethylcellulose and hydroxyethyl cellulose. Natural gums such as karaya and pectin and other polymers such as starch, sodium alginate and poly vinyl pyrrolidone can also be used. The high molecular weights of polyethylene oxide (PEO) and polyethylene glycol (PEG) show good mucoadhesive characteristics because of their linear flexible molecular structure and ability to form physical bonds entangling the mucus 15.

The main function of backing membrane is to provide unidirectional drug flow to buccal mucosa. It prevents the drug to be dissolved in saliva and hence swallowed avoiding the contact between drug and saliva. The material used for the backing membrane must be inert and impermeable to drugs and penetration enhancers. The thickness of the backing membrane must be thin and should be around 75-100 microns. The most commonly used backing materials are Polyester laminated paper with polyethylene. Other examples include cellophane- 325, multiphor sheet and polyglassine paper.

The choice of the plasticizer depends upon the ability of plasticizer material to solvate the polymer and alters the polymer- polymer interactions. When used in correct proportion to the polymer, these materials impart flexibility by relieving the molecular rigidity 18.

Ethanol at different concentrations (5% and 30%), propylene glycol, n-methylpyrrolidone and dimethylsulfoxide have been used as penetration enhancers in buccal dosage forms. Protease inhibitors such as aprotinin, bestatin, puromycin and bile salts, which have been tested and shown to stabilize peptides again buccal mucosal enzymes, have also been used.

Advantages and disadvantages of Buccal Drug Delivery: The advantages of buccal drug delivery are that the direct entry of the drug into systemic circulation obviates first pass hepatic metabolism and that the formulation can be easily administered and, if necessary, removed from the site of application. Fast onset of action, no, or little, irritation expected, not painful and patient compliance are the other advantages. The buccal mucosa also used for controlled drug delivery for extended periods of time 19.

The drawbacks of buccal delivery include the need for the device to maintain its position for many hours against buccal motion and salivary flow, the latter also being responsible for dissolving important parts of the drug, thus reducing mucosal absorption. Another disadvantage is the smaller area of tissue available for dug administration, when compared to the skin, intestinal or lung epithelium 20.

CONCLUSION: The buccal mucosa offers several advantages for controlled drug delivery for extended periods of time. The mucosa is well supplied with both vascular and lymphatic drainage and first-pass metabolism in the liver and pre-systemic elimination in the gastrointestinal tract are avoided. The area is well suited for a retentive device and appears to be acceptable to the patient. With the right dosage form design and formulation, the permeability and the local environment of the mucosa can be controlled and manipulated in order to accommodate drug permeation. Buccal film may be preferred over adhesive tablet in terms of flexibility and comfort. In addition, they can circumvent the relatively short residence time of oral gels on the mucosa, which is easily washed away and removed by saliva.

Moreover, the buccal film is able to protect the wound surface, thus reduce pain and also could treat oral diseases more effectively. Buccal drug delivery has been proposed as an alternative to parenteral administration of drugs. The buccal cavity offers many advantages for drug delivery application, the most pertinent being high accessibility and low enzymatic activity.

Additionally, buccal drug delivery can be promptly terminated in cases of toxicity through the removal of dosage form thereby offering a safe and easy method of drug utilization.