ABSTRACT: Introduction: Green tea contains epigallocatechin gallate (EGCG) that widely use as antibacterial. Formulation development with buffer and emulsifier addition is needed to increase its stability and effectiveness. Buffer addition will increase EGCG stability while emulsifier will increase the cream stability. Objective: This study aimed to determine the optimal formulation from buffer combination between citric acid, ascorbat acid, and triethanolamine that produce pH 5 and also emulsifier combination from propylene glycol, tween 80 and span 80 using simplex lattice design method. Moreover, the effectiveness of optimum cream formula was tested against Propionibacterium acnes (P.acnes) and Staphylococcus epidermidis (S.epidermidis) while its sensitivity was tested on rabbit’s skin. Methods: Buffer optimization was obtained using 13 compositions with the combination of citric acid, ascorbat acid, and triethanolamine namely: 100-0-0,0-100-0,0-0-100,50-0-50,50-50-0,0-50-50,33-33-33,1,67-1,67-6,67, 6,67-1,67-1,67, 1,67-6,67-1,67, 100-0-0,0-100-0,0-0-100. Data was analyzed using design expert. The optimum buffer combination from ethyl acetate fraction of green tea leaves extract then formulated in the cream which contained various emulsifier composition. The comparison from 13 emulsifier composition of propylene glycol, tween 80, and span 80 is 100-0-0,0-100-0,0-0-100,50-0-50,50-50-0,0-50-50,33 -33-33,1,67-1,67-6,67,6,67-1,67-1,67, 1,67-6,67-1,67, 100-0-0,0-100 -0,0-0-100. Cream evaluation data included dispersive ability, adhesion and chemical stability was optimized using design expert. Furthermore, the optimal cream (contained 6% ethyl acetate fraction of green tea leaves extract, buffer composition, and optimal emulsifier) was evaluated its antibacterial activity through in vitro and sensitivity using patch test method.  Result: The result showed that combination of 23,5 citric acid : 54 ascorbic acid : 22,5 triethanolamine as the optimum buffer composition and combination of 21 propylene glycol : 57 tween 80 : 22 span 80 as the optimum emulsifier composition. The amount of optimum cream hindrance on S.epidermis was 25mm, while on P.acnes was 18 mm. The optimum cream did not cause irritation on rabbit’s skin after 3 days evaluation. Conclusion: Optimal cream has the desired physical characteristics, chemical stability, and effectiveness.

INTRODUCTION: EGCG has a good solubility at pH 4-6. On other hand, due to its stability, EGCG is highly unstable at alkali with pH >8. EGCG stability is influenced by pH because EGCG will be more stable in acid aqueous 1

Therefore, buffer addition is needed in formulation. However, buffer optimization on anti-acne cream formula containing EGCG has not been reported. EGCG is unstable to light because it will be degradated up to 85% after 1 hour exposure of radiation 2. Studies about EGCG on 8 green tea products that circulated in USA, Japan, and Korea showed a decrease in EGCG concentration after had been stored in dry temperature 20◦C during 6 months 3. It happened because EGCG as an antioxidant could experience oxidation due to the antioxidant activity of green tea itself was not enough to cope with the excessive oxidative stress. Therefore, antioxidant is needed to enhance the green tea stability.

Ascorbic acid is a water soluble antioxidant, its activity can protect catechin by reducing catechin free radical form into the reduced form. Citric acid is a buffer that has function to create acid pH on EGCG, while triethanolamine has function as alkali reductor. The three materials are expected to produce a pH 5 in cream preparation, pH 5 was selected due to the stability of EGCG on pH 4-6 and skin pH namely 4.5-6.5. Too much acidic pH can cause irritation on skin, whereas too alkaline pH can cause dry and falky skin.

Span 80 and tween 80 emulsifier are non-ionic emulsifier that safe for skin use. Non-ionic emulsifier was chosen because less irritative and less toxic. The combination of non ionic lipophilic and hydrophilic can establish a highly structured emulsion. Propylene glycol acts as a co-surfactant. Propylene glycol will penetrate into surfactan layer that cause the increase of interface fluidity so the emulsion stability will be increased 4. The combination between tween 80 and propylene glycol will increase microemulsion area 5. The use of these three components is intended to obtain a high HLB value thus increasing the stability of the oil-in-water emulsion. Simplex lattice design (SLD) is used in order to obtain the optimum comparison from those three oil in water emulsion. The optimum formula based on tween 80, span 80, and propylene glycol variation has not been reported.

EGCG separation from inside the cream was obtained by 2 grams cream added with 3 mL ethanol then centrifuged with 3000 rpm speed during 30 minues. Supernatant containing oil phase throwned out, while the water phase was extracted again using 3 mL chloroform. After centrifuging with 3000 rpm during 30 minutes, the water phase then added by methanol up to 5 mL volume 6. EGCG concentration tested using HPLC. The mobile phase was combination of 0, 1% phosphoric acid: methanol: acetonitril: aquabidest with ratio 14:1:3:7. Aquabidest had been filtered before used. After those four solvents mixed, then tri ethylamine was added until the aquoeus pH become 4 7. Condition that used in EGCG concentration testing was 20µL sample injected then eluted by C18 stationary phase. The mobile phase was the combination of 0, 1% phosphoric acid: methanol: acetonitril : aquabidest with ratio 14:1:3:7 with the flow rate 1 mL/minute and detected using UV spectrophotometer detector on λ 280 nm.

The optimum cream was tested its antibacterial activity against P.acnes and S.epidermidis using modified method 8.

P.acnes ATCC 6919 and S.epidermidis ATCC 35984 were incubated inside blood gelatine media for 72 hours under anaerob condition for P.acnes test and 24 hours under aerob condition with temperature 37◦C for S. Epidermidis. The bacteria suspension was made using sterile 0.85% NaCl. Sterile cotton stick was inserted into the tube containing the bacteria, then pressed to the tube wall to avoid it’s getting too wet. The cotton was swabbed on Mueller Hinton (MH) media which had previously been incubated for approximately 2 hours until flat and thin as possible, then made a hole in the MH media. The ethyl actetate fraction of green tea leaves extract cream was added into the hole. The plate then incubated under 37 ° C temperature during 72 hours for P.acnes under anaerob condition and 24 hours for S. Epidermidis under aerobic condition. 5% lamb blood was added for P. acnes MH testing.

A = the proportion of citric acid component

B = the proportion of ascorbic acid component

C = the proportion of triethanolamine component

The optimization result with the highest desirability namely one, was the combination of citric acid, ascorbic acid, and triethanolamine with composition ratio 0, 235; 0, 54; 0, 225. High desirability value showed direction to the desired result. Contour plot was served on figure 1. According to the result, blue area showed acidic area or low pH and red area showed alkali pH or high pH. The three combinations produced the optimum composition of citric acid, ascorbic acid, and triethanolamine with ratio (gram) 0, 4; 0, 5; 0, 5 that appeared from pH 5 between the blue and green. 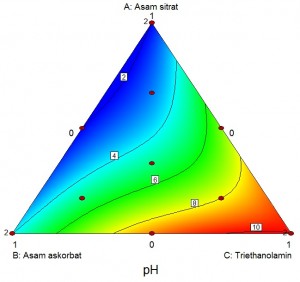 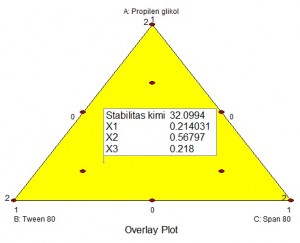 Emusifier composition on desirability value 0,908 was chosen as the optimum composition. Based on the super imposed contour plot diagram (Fig.2), showed that the chosen formula by the software as the optimum formula was the formula containing 21% propylene glycol, 57 % tween 80, and 22% span 80. Each component consist of 2, 1 gram, 5,7 gram and 2, 2 gram in 100 gram formula. Moreover, the software predicted physical characteristics and chemical stability value from the optimum formula namely dispersive ability was 5, 6 cm, adhesive 33 seconds, and chemical stability 32, 1%w/w.

FIG.3: THE OPTIMUM CREAM’S ANTIBACTERIAL ACTIVITY ON S.EPIDERMIS BACTERIA (a) AND P. ACNES (a)

Irritation test: The result showed that the cream did not cause irritation on rabbit’s skin that indicated by no reddish spots appeared on rabbit’s skin from the first day until the third day (72 hours). It indicated that 6% ethyl acetate fraction of green tea leaves extract cream or even the optimum cream did not cause irritation for skin use. It accordance to the study 10 that 1% and 3% concentration did not cause toxicity effect while 7% and 10% concentration could cause toxicity on mice that given topical cream during 30 days.

CONCLUSION: The optimum cream containing combination ratio 23, 5 citric acid: 54 ascorbic acid : 22, 5 triethanolamine and combination 21 propylene glycol : 57 tween 80 and 22 span 80. The hindrance amount of the optimum cream was 25 mm on S. epidermis and 18 mm on P. acnes. The optimum cream did not cause any irritation on rabbit’s skin that had been evaluated for 3 days. Moreover, the optimum cream had the desired physical characteristic, chemical stability, and effectiveness and also could difuse EGCG well.