CAFFEINE AND P-ANISALDEHYDE FROM THE FRUITS OF ENTEROLOBIUM SAMAN PRAIN

CAFFEINE AND P-ANISALDEHYDE FROM THE FRUITS OF ENTEROLOBIUM SAMAN PRAIN

ABSTRACT:Fruits of the plant were air dried for several days and cut into small pieces, which were subjected to oven dried for 24 hours at 45-50°C to effect further chopping. Cold methanol extract of fruits were subjected to acid-base treatment to separate the alkaloids. The treated extract was subjected to column chromatography to isolate the pure compound. The xanthine alkaloid, 1, 3, 7-trimethyl-1H-purine-2, 6 (3H, 7H)-dione, caffeine (compound 1) and also p-anisaldehyde (compound 2) were isolated from the column fraction of this ‘alkaloid containing residue’ by elution with ethyl acetate/10% methanol and ethyl acetate/50-100% methanol, respectively. The isolated pure compounds were identified by extensive spectral (1H-NMR, 13C-NMR, DEPT, HMBC, HSQC, Mass) data analysis. Greshoff isolated an alkaloid, pithecolobin from the bark, which is saponin like in its action. Wehmer stated that the seeds also contain pithecolobin. In the Philippines, a decoction of the inner bark (fresh cambium) and the fresh leaves of this tree is used in diarrhea. All these above mentioned study lead us to work on it.

INTRODUCTION: Enterolobium saman (Jacq.)Prain (Leguminosae, subfamily Mimosoideae) is a large tree of 20 to 25 meters high with characteristic umbrella-shapped canopy, native to Latin America where is commonly known as “Rain-tree” and also available in Bangladesh with the bengali name of “Koroi” 1. The fresh leaves of the plants are used in diarrhea 1.

Previous investigations of Enterolobium samanPrainhave revealed the presence of a number of secondary metabolites viz., triterpene bisdesmosides enterolosaponins A and B 2, albizzine 3-5. Fruit sample of Enterolobium samanPrain was collected from the University of Dhaka, Dhaka-1000, Bangladesh, in December 2005. The plant was identified by Mr. Monjurul Kader Mia, Principal Scientific Officer, Bangladesh National Herbarium.

A voucher specimen for this collection is maintained at the Bangladesh National Herbarium (BNH) under the accession number, DACB- 32081.

MATERIALS AND METHODS: Usually the intact plant/plant part(s) is collected as a whole and sun-dried. In fresh condition, it is then oven-dried at reduced temperature (not more than 50oC) to make suitable for grinding purpose. The coarse powder is then stored in airtight container with marking for identification and kept in cool, dark and dry place for use. Extraction can be done in two ways- Cold Extraction and Hot Extraction. Chromatographic techniques are the most useful in the isolation and purification of compounds from plant extracts. Nuclear magnetic resonance (NMR) spectroscopy is used to determine the structure of the compound.

Extraction of dried and powdered fruits of E. saman was done by cold extraction process by using methanol as a solvent 6. The air driedand pulverized plant material(100 gm) was cold extracted with methanol. Cold methanol extract of fruits were subjected to acid-base treatment to separate the alkaloids. The xanthine alkaloid caffeine 7 (compound 1) and also p-anisaldehyde 8-10 (compound 2) were isolated from the column fraction of this ‘alkaloid containing residue’ by elution with ethyl acetate/10% methanol and ethyl acetate/50-100% methanol, respectively. The structures of compounds 1 and 2 were unambiguously elucidated by high-resolution NMR techniques.

RESULT AND DISCUSSION: The 1H NMR and 13C NMR spectra of compound 1 have shown four 1H signals (three methyl groups and one methine proton) and eight 13C signals (five ring carbons and three methyl carbons) that assumed to be a substituted xanthine system. The 1H NMR spectrum has shown one singlet integrating for one proton at d 7.49 typical for an aromatic or olefinic proton.

The three singlets, each integrating for three protons, centered at d 3.40, d 3.57 and d 3.98 could be assigned to three methyl groups each of which is adjacent to an electro negative element as N or O. Again the presence of these three methyl groups was also observed in 13C NMR at d 27.9, d 29.8 and d 33.6 respectively, that tentatively could be assumed the presence of three N-CH3 groups.

High-resolution ESI-TOFMS of compound 1 showed a [M+H]+ peak at m/z 195, suggesting the molecular formula C8H10N4O2 in agreement with the NMR spectra.

These spectral data was fund to be identical to those published for caffeine 6. On this basis compound 1 was identified as Caffeine (1, 3, 7-trimethyl-1H-purine-2, 6 (3H, 7H)-dione). This is the first report of its occurrence from the Enterolobium genus.

The 1H NMR spectra of compound 2 showed two symmetric pairs of coupled two-protons doublets at d 7.84 (H-2 and H-6) and at d 7.0 (H-3 and H-5), assigning to a 1,4-disubstituted benzene ring. The presence of one sharp one-proton singlet at d 9.88 and another sharp three-proton singlet at d 3.89 could be attributed to one aldehydic group and one methoxyl group respectively. So it is clear from all of these 1H NMR signals that the aldehydic and methoxyl groups are the substituents at C-1 and C-4, respectively, of the 1, 4-disubstituted benzene ring. On this basis the compound 2 was identified as 4-methoxybenzaldehyde (p-anisaldehyde). 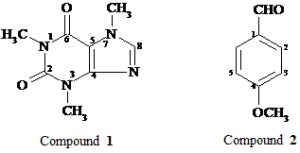