Gynura procumbens has been known to be used as traditional medicine for treatment of kidney disease, rashes, fever and for hypertension. We report here the cardiovascular effects of the different ethanol (95%, 75%, 50%, 25% v/v) and water extracts using in vitro studies. Gynura procumbens leaves extract was prepared by maceration process. The cardiac effects (chronotropic and ionotropic) of each extract were examined on isolated right and left atrium which was prestimulated with 5x10-8 M Isoprenaline. Vasorelaxant effect was examined on intact isolated endothelium rat aorta rings precontracted with 10-6 M Phenylephrine. Water extract was found to be most potent to exhibit dose dependent vasorelaxation and negative chronotropic and ionotropic effects. Chemical analysis of GPWE showed the presence of significant amounts of polyphenolic and flavonoid constituents. The data suggests GPWE contains cardiovascular active substances which are responsible for significant dose-dependent cardiovascular effects. Such cardiovascular effects can possibly be attributed to the high polyphenolic content of this plant.

INTRODUCTION: Hypertension and other cardio-vascular diseases are the leading causes of morbidity and mortality worldwide. Globally, enormous efforts are being done to find the better therapeutic options for cardiovascular diseases. Traditional herbs have been widely used and served as major sources of drug research in pharmaceutical R&Ds. About 30% of worldwide sales of drugs are based on natural products 1.

Gynura procumbens Merr. is a fast growing herb belonging to family compositae, and is widely distributed in certain areas of Southeast Asia. The leaves of this plant are routinely used in Indonesia for the treatment of kidney diseases, eruptive fever, rash, hypertension, diabetes mellitus and hyperlipidemia 2.

It has been reported that an ethanolic extract of Gynura procumbens significantly reduces serum cholesterol and triglyceride levels of diabetic rats. Furthermore, the terpenes and saponins found in the organic extract of plant have been demonstrated to possess antiinflamatory activity. Antihypertensive effect of this plant has been reported 3, but plant cardiovascular effect have not been studied.

We report in this investigation, the cardio-vascular effects of different extracts of Gynura procumbens using in vitro experimental approach.

Plant material: Gynura procumbens Merr. was obtained from Penang Island, Malaysia. A voucher specimen 10833 was deposited at the Herbarium of the School of Biological Sciences, University Sains Malaysia.

Preparation of Crude Extract: The leaves were separated from the small branches of plant and dried in the hot air oven at the 40oC for 3 days. The dried leaves were milled into a fine powder using a milling machine. The powdered leaves were extracted by maceration process at 60oC in water bath using different concentration of ethanol i.e., 95%, 75%, 50%, 25%, and 0%v/v (water extract). These extracts were then concentrated on rotary evaporator (Buchi, Switzerland) under reduced pressure and subsequently freeze dried. The yield obtained for each extract was as follows:

Animals: Experimental animals consisted of adult male SD rats 250-300g, which were bred and obtained from Animal Research And Service Centre (ARASC), USM, Malaysia. The animals were housed in standard environmental conditions (25oC, 60-70% humidity) under natural lighting and fed with normal commercial rat chow (Gold Coin Feed Mills Sdn. Bhd., Malaysia) and water ad libitum. The rats were acclimatised for one week in transit room before used for experiments. Guidelines of the Animal Ethics Committee, USM, Malaysia, were followed while handling and taking out tissue from animals. For aortic ring experiments number of determinations were 8 rings, while for left and right isolated atrium number of determinations were 6 for each tissue.

Aorta rings were suspended horizontally in an organ bath containing 10ml of the above solution, thermoregulated at 37oC and bubbled with carbogen with a resting tension of 1g. The rings were equilibrated at 1g resting tension for 60 min, during which the bathing solution was replaced every 10 min and if needed, the tension was readjusted to 1g. Isometric contraction and relaxation were recorded using Force Displacement Transducer (model- Grass® Force Displacement Transducer FT03). The transducer signals were displayed and stored on a computer for further analysis using AD Instruments Power Lab Software). Concentration dependent relaxation of extracts were studied by precontracting the rings with 10-6 M phenylephrine and when stable maximal contraction plateau was reached, cumulative concentrations (0.25, 0.5, 1.0, 2.0mg ml-1 of organ bath) of extract were added at intervals of 15 min. Dose response curve of different extract were assessed by comparing their vasorelaxing response 4.

Right atrium for beat per minute measurement (Chronotropic Effect): The rats were anaesthised in carbon dioxide chamber (40 sec) and subsequently exanguinated. Carefully, heart was removed and placed in a petri dish containing Kreb’s solution aerated with carbogen. The spontaneously beating right atrium was isolated with precautionary steps to ensure no damage to SA node was done. Right atrium was suspended in organ bath containing 10 ml of physiological solution, thermoregulated at 37oC and bubbled with carbogen, with a resting tension of 1g.

The right atrium was stabilised at 1g resting tension for 90min. During stabilisation the bath solution was replaced every 10 min and if needed the tension was readjusted to 1g. Heart rate (beats per min.) were recorded using Force Displacement Transducer (model Grass®FT03). The transducer signals were displayed and stored on a computer for further analysis using AD Instruments Power Lab Software. Concentration dependent chronotropic effect of extracts were studied by inducing maximum BPM with 5x10-8 M isoprenaline and when stable BPM plateau was recorded, cumulative concentration (0.25, 0.5, 1.0mg ml-1 of organ bath) of extracts were added at intervals of 3 min. Concentration response curve of different extracts were assessed by comparing their chronotropic effects.

Left atrium for amplitude of cardiac muscle contractile tension measurement (Ionotropic Effect): From the above heart, left atrium was isolated and suspended in between electrodes to enable electrical stimulation (2Hz, 5ms, threshold voltage + 50%) (Grass®S6 stimulator) containing 10ml of Kreb’s solution, thermoregulated at 37oC and bubbled with carbogen with a resting tension of 1g. The left atrium was stabilised, at 1g resting tension, for 90 min and during stabilisation the bath solution was replaced every 10min. and if needed the tension was readjusted to 1g. Systolic isometric contraction and relaxation were recorded using force displacement transducer and signals were analysed using AD Instrument Power lab software. Concentration dependent ionotropic effect of extracts were studied by pre inducing maximum amplitude of contraction to the left atrium with 5x10-8 M isoprenaline and when stable contraction plateau was reached, cumulative concentration (0.25, 0.5, 1.0, 2.0mg ml-1 of organ bath) of extract were added at intervals of 3 min. Dose response curve of different extracts were assessed by comparing cardiorelaxing effect of extracts 5.

Chemistry: Based on the experimental results, further attempts were made on the most potent plant extract to chemically define the composition of the active crude extract using the chemical analytical procedures below:

The amount of 10% aluminium chloride was replaced by same amount of distilled water in a blank. The concentration of total flavonoid content in the extract was determined as microgram of quercetin equivalent by using an equation that was obtained from a standard quercetine graph. 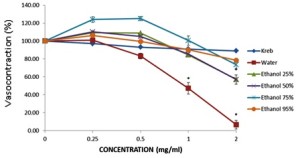 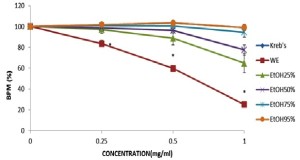 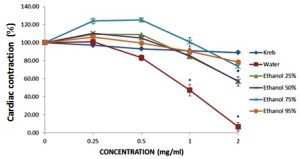 Chemistry: The results of the vasorelaxation, _ve chronotropic and –ve ionotropic effects of GPWE forced the interest to look deeper into the chemical composition of this extract and possible constituents responsible for these effects. The calculated phenolic contents of GPWE were found to be 12.5%,   While the total flavonoid contents of the same extract were approx. 1.6%. Flavonoids comprise a large group of naturally existing polyphenolic compounds widely distributed throughout the plant kingdom. These compounds are reported to have cardiovascular effects and contribute to an essential reduction in the occurance of cardiovascular diseases 9.

In summary, the in vitro vasorelaxation, chronotropic and ionotropic experiments suggests that GPWE is the promising extract among all the extracts obtained from G. procumbens to produce concentration dependent relaxation of vascular smooth muscles, _ve chronotropic  effect and –ve ionotropic effect in the isolated aorta, right atrium and left atrium respectively. GPWE possesses the ability to dilate the vessels along with reduction in heart rate and force of contraction of heart. As the data shows, -ve values indicating non-competitive effects.

This finding indicates the presence of biologically active constituents that can be isolated, purified and used for cardiovascular ailments. Moreover, these findings justify the traditional use of this plant in hypertension management.