Foods and nutrients play a vital role in normal functioning of the body. They are helpful in maintaining the health of the individual and in reducing the risk of various diseases. Worldwide acceptance of this fact formed a recognition link between "nutrition" and "health" and the concept of "nutraceuticals" has evolved. More than any other disease, the etiology of cardiovascular disease reveals many risk factors that are amenable to nutraceutical intervention. The scientific literature shows that there are several bioactive ingredients that are present in small amounts in plants that can affect mammalian biological processes relevant to cardiovascular disease and other common human diseases. The ability of bioactive ingredients to positively influence cardiovascular risk factors should be recognized as an enormous opportunity in the treatment of a highly prevalent disease. Nutraceuticals hold promise in clinical therapy as they have the potential to significantly reduce the risk of side effects associated with drugs and pills along with reducing the global health care cost.  Common ingredients that have been studied include soluble fiber (from oats and psyllium); long-chain omega-3 fatty acids; plant sterols or phytosterols; polyphenols (from dark chocolate, red wine, green tea, or extravirgin olive oil); isoflavones from soy; Chinese red-yeast rice; and probiotics from dairy products. Amongst this vast array of bioactives, there is emerging evidence indicating role of phytosterols in mitigating risk of cardiovascular disease and promoting general health and well-being. Phytosterols are cholesterol-like molecules found in all plant foods. They are absorbed only in trace amounts but inhibit the absorption of intestinal cholesterol including recirculating endogenous biliary cholesterol, a key step in cholesterol elimination. In this review, an attempt has been made to summarize some of the recent research findings on phytosterols that have beneficial effects on the heart, in order to update the practicing clinician on the benefit of using phytosterols for the management of cardiovascular diseases.

Majority of the CVD are preventable and controllable through dietary manipulation. Many research studies have identified a protective role of nutraceuticals against CVD 2. The phytosterols are arguably the most intensively studied of nutraceutical substances with regard to prevention of CVD and as a result, conclusions about them can be drawn with good scientific support. Phytosterols are plant-derived sterols that are structurally similar and functionally analogous to cholesterol in vertebrate animals. In many foods sitosterol is the most abundant form, followed by campesterol and stigmasterol.

The plant sterols are esterified in intestinal cells by creating an ester bond between a fatty acid and the sterol or stanol.Esterification makes plant sterols and stanols more fat-soluble so they are easily incorporated into fat-containing micelles in body.The various research work  has shown that  phytosterol feeding resulted in changes in serum cholesterol levels and dietary cholesterol absorption was noticed to be inhibited and the response to a high-cholesterol diet was attenuated 3.

However, recent convention among nutritionists has divided phytosterols into the two categories of “sterols”or “∆5-sterols,” indicating a double bond at position 5, and “stanols,” indicating 5α-reduction of that double bond 4. These classes are reflected in the common names of the compounds. The sitosterol is structurally identical to sitostanol except for the double bond at position 5, and campesterol bears the same relationship to campestanol.

Reduction of the double bond to give a β-hydrogen at position 5 (facing upward from the ring system) is a common intestinal bacterial degradation product of cholesterol and plant sterols but is not generally found in foods 5, 6. Sterol biosynthesis and metabolism are quite different in plants and animals 7. Cholesterol is synthesized from acetate through the straight-chain compound squalene and then cyclized to form many intermediate precursor sterols, but the final product is most often nearly pure cholesterol, and only trace amounts of related precursors are found in humans 8. In plant cells phytosterols are also synthesized from acetate subunits through squalene, but the first cyclized product after squalene is the unique plant sterol cycloarterol (Figure 2).

Some foods, such as rice, contain cycloartenol or related compounds in significant amounts 9. Plants produce a variety of final sterol products, and each species has a characteristic distribution of sterols that has sometimes been used as a chemical fingerprint for identification of food product sources. Although modifications to the sterol nucleus occur, the most common plant sterols have a nucleus that is identical to cholesterol, with changes occurring in the side chain. In foods three compounds account for most of the phytosterol mass: sitosterol (24-ethylcholesterol), campesterol (24-methylcholesterol), and stigma sterol (122-24-ethylcholesterol).

The structural similarity to cholesterol is striking, and it is difficult to separate cholesterol from phytosterols or different phytosterols from each other by physical methods unless powerful techniques such as high pressure liquid chromatography or gas chromato-graphy involving thousands of theoretical plates are employed.

The complexity of phytosterols is increased further by steric asymmetry. Addition of alkyl groups in the side chain results in the substituted carbon becoming asymmetric 10. Generally the α-configuration is more common in higher plants, whereas the β-configuration predominates in algae 7. Stereochemistry has not generally been considered in human and animal studies of phytosterols. In animals most of the total body cholesterol is free, with a relatively small aggregate amount present as long-chain fatty acyl esters in plasma lipoproteins and specialized cells.

Plants have a more diverse variety of derivatives at the 3-position.Long-chain fatty acyl esters are present in most plants and constitute over 50% of the total sterol in foods such as corn oil 11. Ferrulate esters are found in appreciable quantity in many foods 12. Glycosylation occurs more actively in plants than in animals, and glycosylated phytosterols are a minor component of most foods. However, the amount is sometimes appreciable, and glycosides constitute 82% of potato phytosterols 13. It should be emphasized that glycosidic linkages are not cleaved by the alkaline conditions used to hydrolyze sterol esters but rather require acidic hydrolysis. Phytosterol glycosides are therefore not measured by common procedures for phytosterol quantitation, and future techniques need to include both alkaline and acidic hydrolysis conditions. 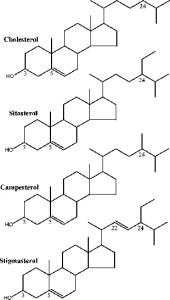 Sources &Foods Enriched with Plant Sterols and Plant Stanols: Phytosterols are found in all plant foods, but the highest concentrations are found in unrefined plant oils, including vegetable, nut, and olive oils 14. Nuts, seeds, whole grains, and legumes are also good dietary sources of phytosterols 15. The majority of clinical trials that demonstrated a cholesterol-lowering effect used plant sterol or stanol esters solubilized in fat-containing foods, such as margarine or mayonnaise 16. More recent studies indicate that low-fat or even nonfat foods can effectively deliver plant sterols or stanols if they are adequately solubilized 17, 18.

The effect occurred in micellescontaining the trihydroxy bile salt taurocholate and not with the dihydroxy bile salt glycodeoxycholate, suggesting that the distribution of bile salts present in the intestine may be important in determining the effectiveness of phytosterols in reducing cholesterol absorption. The lack of complete solubilization of cholesterol in bile salt/phospholipid micelles limits absorption is supported by studies. Further evidence of the importance of micellar solubility is the finding that the absorbability of different sterols is directly related to their equilibrium micellar concentration 45.

At the level of the liver the LDL production rate was reduced by 20% and the plasma concentration of dense LDL was reduced by 22% with light LDL remaining unchanged 54. So, scientific studies have suggested that phytosterols when consumed in the diet decrease the absorption and plasma levels of cholesterol. Increasing the aggregate amount of phytosterols consumed in a variety of foods may be an important way of reducing population cholesterol levels and preventing coronary heart disease.

CONCLUSION: In the recent years, a trend has been seen in that phytosterol incorporation in practical commercial products which lower LDL cholesterol with minimal risk. Although more work needs to be done on the safety of phytosterols, it is likely the population risk of heart disease can be reduced appreciably over time by the use of more phytosterols in foods and supplements. Up to this time attention has been focused principally on the addition of phytosterol esters to fatty foods. This needs to be complemented by development of biologically active phytosterol preparations that contain minimal fat and are capable of being added to a variety of foods including nonfat foods.

However, perhaps the most important future work needs to be focused on the potential role of the lower levels of phytosterols in the natural diet and standard foods. Food databases need to include phytosterol levels to allow dietary consumption to be calculated. Clinical trials need to be done to evaluate the role of phytosterols in vegetable oils and other foods with respect to cholesterol lowering in which both the phytosterol content and the fatty acid composition of the diet are measured and controlled. Finally, industrial manufacturing processes need to emphasize the retention of phytosterols in foods. Refining of vegetable oils can reduce the phytosterol content substantially, taking out most of the phytosterols and carotenoids from steam-refined palm oil55 and making substantial reductions in other oils11,56. With cooperation between the food industry and academia phytosterols may prove to be a useful tool to reduce cholesterol levels in large numbers of people with minimum expense and risk.