ABSTRACT: Acute lymphoblastic leukaemia (ALL) of the B-cell lineage (B-ALL) is a malignant neoplasm identified by the accumulation of immature lymphoid progenitor cells in bone marrow and blood. Numerous chromosomal aberrations have been found to be correlated with disease, relapse and its clinical outcome. The survival and cure rate has been improved drastically with the advent of modern methods of diagnosis and availability of targeted pharmacological agents. However, the limitation is the higher incidence of relapsed disease. An 8-year old male child was diagnosed with B-ALL, the disease relapsed despite proper therapeutic regimen after reporting to the hospital. Conventional cytogenetic analysis revealed a normal male karyotype. FISH panel for B-ALL including t(9;22) BCR-ABL, t(12;21) ETV6-RUNX1, KMT2A (11q23) rearrangement and t(1;19) PBX1-E2A was performed and was positive for translocation t(12;21) ETV6-RUNX1 in 70% of the cells at the time of diagnosis. At the time of relapse, patient underwent cytogenetics workup including cytogenetics and FISH. Bone Marrow karyotyping showed a male karyotype with t(12;21) in all the metaphases studied and FISH was positive for translocation t(12;21) ETV6-RUNX1 in 90% of the cells. Also, next-generation sequencing for 57 gene panel showed a novel single nucleotide polymorphism (SNP) in the FLT3 gene in exon 24, c.2888C>T. Taken together, these genetic abnormalities may have an important contribution to a good prognosis and therapeutic efficacy post relapse in the present case study. The clinical functionality of novel SNP reported in the FLT3 gene should be further explored in relation to diagnosis and clinical outcome of a disease.

INTRODUCTION: Acute lymphoblastic leukaemia (ALL) is the most common subtype of childhood cancer and is characterized by recurrent genetic aberrations. An array of clinical and patho-physiological features play an important role as prognostically significant markers in childhood ALL including age, Leukocyte counts, chromosomal abnormalities, biochemical markers and some immunophenotypic markers 1.

Paediatric ALL involves recurrent clonal chromo-somal abnormalities in ~80% of ALL cases which includes abnormalities of structural and numerical alterations 2. Overall, T-ALL has a bad prognosis when compared to B-ALL.

Approximately, 90% of ALLs have numerical or structural chromosomal changes. The genetic abnormalities in B-ALL include hyperdiploidy, hypodiploidy and balanced chromosomal translocations t(12;21), t(1;19), t(9;22), t(4;11) 3. These aberrations serve as risk stratifying markers, predictors of disease prognosis, helps in decision making for therapeutic planning, implementation of targeted therapy, and sensitive monitoring of therapeutic response 4. Most paediatric ALL patients respond well to conventional chemo-therapeutic agents with a 5-year overall survival rate around 85-90% 5. However, after the relapse of the disease, the outcome becomes less favorable.

Identification of these specific gene aberrations and rearrangements allows stratifying prognostically valuable patients in paediatric B-ALL. The four common gene rearrangements which have been widely studied for prognostic values include TEL-AML1, BCR-ABL, E2A-PBX1, MLL-AF4 in childhood B-ALL. The t(12;21) is the most common chromosomal rearrangement in ALL. It has been reported in 25% of children with B-ALL and conferred an excellent prognosis in previous studies. This translocation occurs in joining with the TEL (or ETV6) gene on chromosome 12p with the AML1 (RUNX1) gene on chromosome 21 and is associated with an early pre-B immuno-phenotype, a younger childhood population, and non hyperdiploidy. The ETV6-RUNX1 fusion protein is thought to disrupt the normal expression of RUNX1-regulates genes by converting RUNX1 to a transcriptional repressor.

Case Report: We report a case of an eight-year-old male child patient from India, diagnosed with ALL in April 2014, hematological and biochemical markers were investigated for diagnosis and during the course of treatment Table 1.

TABLE 1: HAEMATOLOGICAL PARAMETERS OF THE PATIENT DURING FOLLOW UP

Written informed consent was taken from the guardian of the patient for this report and images. The flow cytometry results identifying the most important markers for diagnosis including CD19, CD20, CD22, CD24, and CD79a. The B-lineage markers are CD19, CD22 (membrane and cytoplasm) and CD79a 6 Table 2. A positive reaction for any two of these three markers, without further differentiation markers, identifies pro-B ALL confirming it as B lineage ALL with aberrant expression of myeloid markers.

Cytogenetic analysis of cells was processed by standard methods of setting the culture followed by harvesting and chromosome stained by G-banding. Karyotype analysis was performed and the latest ISCN nomenclature was followed 7. In pre-ALL patients, we normally get chromosomes with poor morphology. Analysis of 26 metaphases at ISCN400 banding resolution showed a normal male karyotype in all the metaphases studied. Further, we performed FISH panel for B-ALL which included the most common chromosomal rearrangements of known prognostic significance i.e. t(9;22) BCR-ABL, t(12;21) ETV6-RUNX1, KMT2A (11q23) rearrangements, and t(1;19) PBX1-E2A. The FISH analysis showed positivity for translocation, t (12;21) ETV6-RUNX1 in 70% of the cells. CSF for cytospin was found negative for malignant cells.

Initially, treatment included three-drug induction with dexamethasone, vincristine, and Pegaspargase. At the end of induction, remission was confirmed, limited MRD assessment was negative. The treatment included a higher dose of methotrexate followed by maintenance therapy. The total duration for treatment was 3 years and 2 months. During initiation and follow up, the haematological and other parameters were assessed in Table 1. The patient was admitted, bone marrow examination showed hypercellular marrow replaced by blasts having coarse chromatin and inconspicuous nucleoli. Pre B ALL CSF was negative for cytospin. The conventional cytogenetic analysis was performed on 24 and 48-h un-stimulated bone marrow cultured cells. 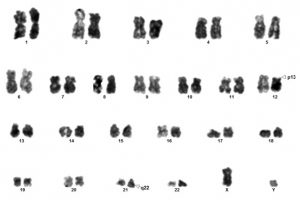 RTPCR was performed for FLT3 ITD, FLT3-TKD, NMP1 and PDGFR mutations and was found negative as we found wild type sequence. To identify the reason for relapse, in this case, we subjected the sample to NGS analysis. Next-Generation Sequencing has enabled an improved understanding of the pathogenesis of many diseases, including ALL at the nucleotide level, which enables a tailored therapeutic regimen for the patient. 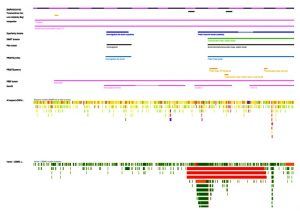 However, the results showed no significant genomic aberrations with prognostic /risk identification, the only SNP in gene FLT3 gene, in exon 24, c.2888C>T with amino acid change p.Ser963Leu was reported. Which is a novel SNP in FLT3 gene on exon 24, c.2888C>T and has not been analyzed in relation to disease or drug interaction so far. Further, we tried to study the function of the encoded protein and its effect on the signaling pathway involved in leukemia by using tools of bioinformatics Fig. 1, 2 and 3. The prediction showed that FLT 3 gene mutation (POSITION: 2888-[C/T] at GENE LEVEL & SER -> LEU at PROTEIN LEVEL) doesn't have any significant impact at both structure and function level. The protein structure of both mutated and un-mutated was validated using the SWISS-MODEL server for structure similarities at 2D & 3D levels but no significant changes found and also predicted protein functions using InterProtScan tool and found no differences at functional properties level Fig. 3, 4 and 5.

The patient was started with BFM RFZ chemotherapy protocol, because of late relapse of TEL AML positive B cell ALL and bone marrow transplant suggested and the patient well tolerated the chemotherapeutic treatment.

DISCUSSION: In our case, TEL AML1 was positive and is related to a good prognosis. The TEL gene rearrangements due to the 12; 21 translocation is the most common previously established molecular abnormality markers in ALL, approximately 25% of cases with a B-precursor immunophenotype 8, 9. The authors claimed that this gene rearrangement is related to favorable prognosis and was independent of recognized good-risk features in B-precursor leukemia, including age, initial leukocyte count, and hyperdiploidy and therefore, promises the possibility to treat these patients less aggressively without loss of therapeutic efficacy 8. In another study, the authors assessed the use of the TEL/AML1 fusion transcript as a marker of minimal residual disease, 2 of 7 patients relapsed with TEL/AML1 rearrangements in their bone marrow 9.

The FMS-like tyrosine kinase 3 (FLT3) has a crucial role in many regulatory processes of hematopoietic cells, including phospholipid metabolism, transcription, proliferation, apoptosis, and establishing a connection with the RAS pathway; it is also involved in leukemogenesis. Possible target in paediatric acute leukemia is FMS-like tyrosine kinase 3 (FLT3) 10. FLT3 aberrations are among the most frequently identified transforming events in AML and have significant clinical implications in both high-risk paediatric AML and in certain high-risk groups of paediatric ALL. Therefore, the successful targeting of FLT3 has tremendous potential to improve outcomes in these subsets of patients 11. FLT3 signaling is central to the development of hematopoietic stem cells, B-cell progenitors, dendritic cell progenitors, and natural killer (NK) cells.

Mutational profile of several subtypes of paediatric ALL investigated by Ding et al., using next-generation sequencing (NGS) which enables the complete knowledge of the disease pathogenesis at the nucleotide level, and enables a tailored therapeutic regimen for each patient 12. FLT3 is an oncogene (a receptor tyrosine kinase), expressed on hematopoietic progenitor cells and is indicative of poor prognosis 13, 14. Mutations in the FLT3 gene have already been established in an association of Leukemia disease especially in relapse cases in patients even after 1 year of initial diagnosis in previous studies 15. Our results are in alignment with previous studies 16. Since the protein structure modeling of this SNP has not been characterized biochemically and clinically its role has not been evaluated so far, its impact in ALL remains speculative 17, 18.

It has been hypothesized in studies that at relapse, a dominant subclone emerges as founding clone, because of additional mutations a particular subclone might have survived initial therapy, Therefore, the mechanism of relapse is likely to be shaped by whatever remission including therapy the patient has received.

CONCLUSION: TEL-AML1 is a good prognosis factor for ALL in paediatric patients, in our case also the patients responded well to therapeutic treatment. The disease was relapsed as evidenced from bone marrow blasts cells percentage and by using other significant immunophenotypic markers and TEL-AML1 was confirmed positive by cytogenetic and FISH. The NGS test using 57 gene panel showed the only SNP in the FLT3 gene for which the clinical significant has not been evaluated so far. For the first time, we report a novel SNP in FLT3 gene on exon 24, c.2888C>T with amino acid change p.Ser963Leu was reported in association with a good prognosis. Therefore, we conclude that TEL-AML1 gene rearrangement and FLT3 SNP exon 24, c.2888C>T in our case has contributed significantly towards the good clinical outcome in ALL. However, the clinical outcome of the reported SNP in the FLT3 gene remains to be explored using further prospective case/cohort studies. The Paediatric ALL is a heterogeneous disease and to detect genetic changes/aberrations is pivotal in order to predict the prognosis and to ensure the appropriate treatment administered, which in turn has a direct impact on response to therapy. Therefore, the diagnostic dilemma can be solved using further prospective case/cohort studies.

ACKNOWLEDGEMENT: We greatly acknow-ledge the patient who kindly consented to be a part of the study. The authors also thank the whole-hearted support and encouragement from the management of Indraprastha Apollo Hospitals.

CONFLICTS OF INTEREST: The authors declare no conflict of Interest Financial, or otherwise.