CASSIA FISTULA LINN: A REVIEW OF PHYTOCHEMICAL AND PHARMACOLOGICAL STUDIES

CASSIA FISTULA LINN:  A REVIEW OF PHYTOCHEMICAL AND PHARMACOLOGICAL STUDIES

ABSTRACT: Cassia fistula Linn. (Family: Caesalpinaceae), commonly known ‘Sonali’ or ‘Bandarlati’, has been used in different traditional system of medicines for various ailments since ancient times. Cassia fistula grows throughout in Bangladesh and in many other Asian countries such as India, China, Hong Kong, Philippines, Malaysia, Indonesia, and Thailand. This article aims to provide a comprehensive review on the phytochemical and pharmacological aspects of Cassia fistula.  In traditional medicine, it has been used in the treatment of diabetes, hematemesis, leucoderma, pruritis, intestinal disorder and as antipyretics, analgesic and laxative.  The fruits, stem bark, and leaves of this plant contain a variety of biologically active compounds such as anthraquinones, flavonoids, flavon-3-ol derivatives, alkaloid, glycosides, tannin, saponin, terpenoids, reducing sugar and steroids those have various medicinal properties. The fruit and stem bark extract shows various activities like antipyretic, anti-inflammatory, antioxidant, antidiabetic, hypolipidemic, hepato-protective, antimicrobial, antitumor, antiulcer etc. The article reviews the various activities of the plant

INTRODUCTION:Cassia fistula Linn also known as the golden shower tree (Bengali name: Sonali or Bandor lathi), belongs to the family Caesalpiniaceae, is widely used for its medicinal properties, its main property being that of a mild laxative suitable for children and pregnant women.

It is also a purgative due to the wax aloin and a tonic 1 and has been reported to treat many other intestinal disorders like healing ulcers 2.

According to the WHO, more than 70% of the world’s population must use traditional medicine to satisfy their principal health needs.

In developing countries 80% population are using traditional medicine in primary medical problems 3, 4. Plant drugs and herbal formulations are frequently considered to be less toxic and free from side effects than synthetic one 5.

In traditional medicine, Cassia fistula is one of the most commonly used plants in Unani and Ayurvedic medicines, this plant has been described to be useful against skin diseases, liver troubles, tuberculous glands and its use in the treatment of haematemesis, pruritus, leucoderm and diabetes has been suggested 6. Traditionally, the plant is also used as an infusion, decoction, or powder, either alone or in combination with other medicinal plants. In modern times, and in any controlled clinical trials, commercial preparations have tended to be standardized extracts of the whole plant. The plant has documented to possess analgesic7, anti-inflammatory 8, antioxidant 9, antidiabetic 10, as well as hepatoprotective activity 11.

Since many disease conditions commonly treated with Cassia fistula in traditional medical systems are considered self-limiting, its purported benefits need critical evaluation. This review summarizes current scientific findings and suggests areas where further research is needed and also to verify the therapeutic efficacy of Cassia fistula. 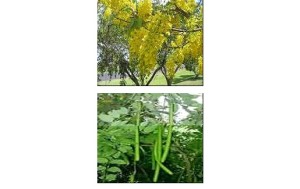 Herbal Medicine Uses: There are many Cassia species worldwide which are used in herbal medicine systems. These particular families of plants are used widely for their laxative actions. Cassia fistula is no exception... it is often used as a highly effective moderate laxative that is safe even for children.

However, in large doses, the leaves and bark can cause vomiting, nausea, abdominal pain and cramps. Cassia fistula is also employed as a remedy for tumors of the abdomen, glands, liver, stomach, and throat, for burns, cancer, constipation, convulsions, delirium, diarrhea, dysuria, epilepsy, gravel, hematuria, pimples, and glandular tumors. In Ayurvedic medicine systems, the seeds are attributed with antibilious, aperitif, carminative, and laxative properties while the the root is used for adenopathy, burning sensations, leprosy, skin diseases, syphilis, and tubercular glands. The leaves are employed there for erysipelas, malaria, rheumatism, and ulcers. In Brazilian herbal medicine, the seeds are used as a laxative and the leaves and/or bark is used for pain and inflammation.

Ayurvedic Medicine Uses: In Ayurvedic medicine, Golden Shower Tree is known as "disease killer". Its fruit pulp is used as mild laxative. as well as cardiac conditions and stomach problems such as acid reflux. Flowers used for fever, root as a diuretic. The bark and leaves are used for skin diseases. The seeds are recognised as antibilious, aperitif, carminative, and laxative while the root is used for curing adenopathy, burning sensations, leprosy, skin diseases, syphilis, and tubercular glands. The leaves of the tree is used for erysipelas, malaria, rheumatism, and ulcers, the buds are used for biliousness, constipation, fever, leprosy, and skin disease and the fruit for abdominal pain, constipation, fever, heart disease, and leprosy. Thus every part of this plant is recognized for its medicinal properties.

The plant is being considered as a firewood source in Mexico. The reddish wood, hard and heavy, strong and durable, is suited for cabinetwork, farm implements. The bark has been employed in tanning, often in conjunction with avaram. The drug "Cassia fistula", a mild laxative, is obtained from the sweetish pulp around the seed.

CONCLUSIONS: Before the introduction of modern medicines, disease treatment was entirely managed by herbal remedies. It is estimated that about 80% of the world population residing in the vast rural areas of the developing and under developed countries still rely mainly on medicinal plants. It is quite obvious that the plant is widely used in traditional medicinal system of India and has been reported to possess hepatoprotective, anti-inflammatory, antitussive, antifungal and also used to check wounds healing and antibacterial properties. It is known as a rich source of tannins, flavonoids and glycosides present in Cassia fistula might be medicinally important and/or nutritionally valuable. The plant is rich in carbohydrates, Linoleic, Oleic, and Stearic acid. Leaf of Cassia fistula mainly contains Oxalic Acids, Tannins, Oxyanthra-quinones, Anthraquinones derivatives. Fruit of Cassia fistula contains Rhein Glycosides Fistulic Acids, Sennosides A B, Anthraquinones, and Flavanoid-3-ol-derivatives. Ceryl Alcohol, Kaempferol, Bianthraquinone Glycosides, Fistulin, Essential Oils, Volatile Components, Phytol (16.1%), 2-Hexadecanone (12%), Crystals, 4-Hydroxy Benzoic Acids Hydrate have been reported from the plant.

The present review summarizes some important pharmacological studies on Cassia fistula and phytochemical investigations and isolated principles from them, which can be investigated further to achieve lead molecules in the search of novel herbal drugs.

ACKNOWLEDGEMENT: The authors are thankful to the Department of Pharmacy of Southeast University, Bangladesh for providing literature survey facility to carry out the work.