CAVERNOUS HEMANGIOMA OF UTERINE CERVIX – A RARE CAUSE OF POSTCOITAL BLEEDING

CAVERNOUS HEMANGIOMA OF UTERINE CERVIX – A RARE CAUSE OF POSTCOITAL BLEEDING

Hemangiomas are abnormal accumulation or growth of blood vessels in the internal organs or in the skin. Most hemangiomas occur at birth while others develop after birth. There are two types of hemangiomas the capillary hemangioma and the cavernous hemangioma. A capillary hemangioma is usually seen at the top layer, while the cavernous hemangioma is often found at the deeper layer. Some patients, however, may present with both types. The cavernous hemangioma, also known as cavernoma, occurs less commonly than the capillary hemangioma. It is a benign tumor of blood vessels that rapidly grows over a period of time and does not usually reduce in size. Most cavernous hemangiomas are usually soft to the touch. Hemangiomas are common vascular, childhood benign tumors with special predilection to head & neck region. Benign vascular tumors are fairly common with wide distribution through the body. They may be single or multiple. They may occur in combination, affecting a number of organs and producing well known syndromes but vascular tumors of the female genital tract are very rare. There are relatively few reports in the world literature of hemangiomas of uterine cervix. To-date fewer than 50 cases have been reported. Most of these lesions show asymptomatic behavior and are incidental findings, but sometimes, they may cause abnormal vaginal bleeding in the form of menometrorrhagia and post coital bleeding. Whenever these lesions are there the presenting clinical features mimic the malignancy. Such tumors of the female genitalia are generally found in one organ and are rarely associated with other organ. They should be included in the differential diagnosis of patients with vaginal bleeding.

INTRODUCTION: Vascular tumors are rare in female genital tract, they can present with symptoms similar to epithelial malignancies and may lead to unwarranted radical surgery 1 .The Cavernous hemangioma of the cervix is extremely rare, benign lesion. To, date fewer than 50 cases have been reported, but may cause serious bleeding 2. We present a case of 43 years old educated  parous woman who attended the outpatient department with history of  three episodes of post coital bleeding in last  4 months duration, of which the last episode of bleeding was frightening due to heavy bleeding. The examination revealed a polypoidal mass arising from endocervical region.

Case report: A 43 years old parous woman presented to outpatient department of obstetrics & gynecology with complaints of three episodes of painless post coital bleeding in a span of four months. She narrated that the in the first episode the amount of vaginal bleeding was small in amount and she has to use only one sanitary pad. The second episode of the bleeding was slightly more than the first one. She reported to the hospital at the third episode of vaginal bleeding which was heavy, fresh & bright red in color. She had two normal vaginal deliveries and her last childbirth was 12 years back. She was using barrier method for contraception and there was no significant history of any medical or surgical disorder. Her menstrual cycles were normal. General physical examination was unremarkable. Her vitals were stable. On speculum examination fresh vaginal bleeding was present. A tongue shape spongy vascular mass was hanging from the cervix, the surface of this mass was still oozing (Fig. 1). 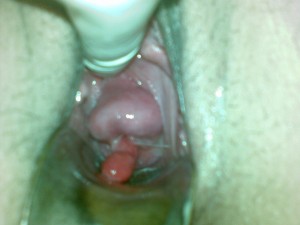 Vaginal examination revealed that the same mass was arising from the endocervical canal hanging with a pedicle, soft to feel, uterus was multiparous in size, firm, non-tender, mobile and the fornices were free. After routine investigations she was admitted for removal of polyp. Polypectomy followed by cauterization of base of pedicle which was slightly oozing was carried out. The post-operative period was uneventful. The histopathological evaluation of the specimen revealed as the cavernous hemangioma of the cervix (Fig. 2). 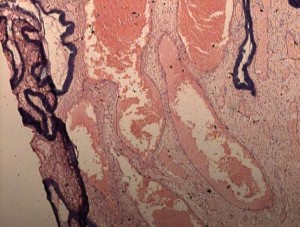 FIG. 2: CAVERNOUS HEMANGIOMA OF THE CERVIX

Discussion: Hemangiomas are benign vascular malformation of enlarged dysplastic vascular channels with abnormal growth of the endothelial cells which are fairly common with wide distribution throughout the body, but such tumors are rare in female genital organs. These lesions when traumatized and/or ulcerated lead to vaginal bleeding which has been reported to cause torrential hemorrhage in some cases requiring hysterectomy also.

They are classified into capillary, cavernous, arteriovenous or mixed type. Capillary hemangioma is comprised of numerous intertwining capillary sized vessels lined by endothelium. When lesional vascular channels are considerably enlarged, the term cavernous hemangioma has traditionally been applied. They differ from capillary hemangioma in that it is less well circumscribed, is larger and is usually deeper in submucosal tissues 3. Cavernous type is less common than the others.

Not much is known regarding the aetiopathogenesis of these mesenchymaltumours. According to Batsakis 4 the cavernous type is either the consequence of trauma or a congenital malformation; hereditary factors may play a role in the pathogenesis of some familial forms of these tumors.

On gray-scale and Doppler hemangioma appears as a well-defined, uniformly hyperechoic lesion with peripheral feeder vessels that are characteristic of a hemangioma 5.

Most of these lesions are asymptomatic incidental finding but sometimes they may cause abnormal vaginal bleeding in the form of menometrorrhagia and postcoital spotting 2. In Gupta et al., 1 a retrospective study, vascular tumors of female genital tract over 4 years were reviewed. The age range of these cases was 12-52 years and the presenting complaint was abdominal pain/mass, postcoital bleeding, and vaginal and vulval mass.  The vascular tumors occurred most commonly in ovary (six), followed by vulva (two), and one each in cervix and vagina in their study.

Clinical diagnoses ranged from cystadenoma in ovarian tumors to endocervical polyp in cervical tumor. Histologically, all were benign vascular neoplasms, ranging from hemangioma (five), lymphangioma (one), lymphangiomacircumscriptum(one) to angiomatosis (two) and arteriovenous malformation (one). At the time Athern’s 6 review 35 cases of cervical hemangioma had been reported in the literature. Ages ranged from 9 to 71 year and cases were equally present in the menstrual, perimenopausal and postmenopausal periods. In review of the literature most of the patients were treated with excision,cauterization, trachelectomy, radiation or hysterectomy. Surgical approach using the co2 laser has been described by bcllina 7and davis 8. Bleeding may persist despite curettage and suturing and ultimately require hysterectomy 9.

CONCLUSION:   Though Cavernous hemangioma of cervix is extremely rare but they may cause abnormal vaginal bleeding in form of menometrorrhagia, post coital bleeding or postmenopausal bleeding.

Key message: One should always keep cavernous hemangioma of genital tract as one of the differential diagnosis in woman presenting with vaginal bleeding.