ABSTRACT: Epilepsy is an achronic neurological disorder characterized by recurrent seizures. There is a positive feedback cycle between epileptogenesis and brain inflammation. It has been proved that COX 2 is expressed constitutively in certain parts of the CNS and is further induced as a result of seizurogenic activity. Of the various experimental models of epilepsy, one is the maximal electroshock (MES) model, which is highly predictive of AED against GTCS. Other is the pentylenetetrazole (PTZ) model, which is useful in the AEDs activity against absence seizures. The present study was done to evaluate the antiepileptic effect of selective COX 2 inhibitor celecoxib in MES and PTZ models in mice and to see the differential effect of celecoxib in electrically chemically induced seizures. In the first part of the study, Celecoxib (2.5mg/kg, 5mg/kg & 10mg/kg) was injected intraperitoneally in albino mice. MES was induced, and durations of various phases were noted. Duration of Tonic hind limb extension was taken as an index of antiepileptic activity. The results indicated that celecoxibin, the dose of 10mg/kgi.p. Significantly reduced the duration of THLE. In the second part, celecoxib was injected in (10mg/kg & 20 mg/kg i.p.), in PTZ induced model, and the result displayed the proconvulsive activity in the PTZ seizure model. i.e., decrease in the latency to preclonic jerk and increase in the duration of clonus. This suggested the role of inflammation and COX2 isoenzyme in the pathophysiology of epilepsy and the clinical application of COX 2 inhibitors as a future therapeutic strategy for GTC seizures management.

INTRODUCTION: Epilepsy, defined by the sporadic occurrence of spontaneous recurrent seizures (SRS) is often accompanied by inflammation of brain.

Pronounced increase in the expression of key inflammatory mediators (e.g., Interleukin – 1 β, TNF α, COX – 2 & C-X-C motif chemokine 10) after seizures may cause secondary damage in the brain & increase the likelihood of repetitive seizures 1.

Cytokine and prostaglandins are well-known mediators, and their biosynthesis is enhanced following seizures 2. The key role of inflammatory mediators in relation to epilepsy has been clarified over the last decade. Numerous studies have shown PGs as potential mediators of epilepsy. Studies have shown the protective effect of aspirin in MES and PTZ models of epilepsy in a dose-dependent manner and potentiation of the anticonvulsant effect of Lamotrigene with Aspirin 3, 4. COX-2 enzyme has been shown to be upregulated by convulsive nerve activity. In some previous studies, non-selective COX inhibitors (Mefenemic acid, Melclofenemic acid, Acetaminophen) have shown to delay the onset of PTZ-induced convulsions 5, 6. As weal ready know, the COX enzyme has two isomers, COX-1, which is widely distributed in various cell types, while COX-2 is constitutively expressed in inflammation sites. COX-2 is mainly expressed in Glutaminergic neurons, particularly in the hippocampus and cerebral cortex, the areas that demonstrate prominentrolein seizures, suggesting that COX-2 plays a critical role in convulsive states 7.

Most current AEDs act on ion channels that directly control neuron excitability. These medications have at least two major problems. First, even with optimal AED therapy, 20–30% of the patient has poor seizure control and become intractable. Second, these medications act as general CNS depressants and must be taken chronically for seizures up press ions, they also have marked inhibitory effects on cognitive development. Therefore the development of a new AED that can modulate seizures through other mechanisms is required for refractory epilepsy treatment. With the evidence of the protective effects of non-selective COX inhibitors in MES and PTZ seizures and to spare the housekeeping functions of COX-1enzyme, the present study has been planned to evaluate the anticonvulsant effect of selective COX -2 inhibitor, celecoxib, in MES and PTZ induced seizures in mice and to see its differential effect on electrically and chemically induced seizure.

Animals: Adult, healthy swiss albino mice, aged 6-8 weeks of either sex, weighing 20 – 30 g were used. They were housed under standard laboratory conditions [controlled temperature (around 22±2°C) and humidity (50%) colony room] for one week before experiments were started and were kept in groups of 3-4 in per polypropylene cages. Animals were allowed a standardized diet and water ad libitum, except for the period of experimentation. Techno-electro convulsometer. Stop-watch, Drugs and Chemicals Celecoxib (Cadilla pharma, Ahmedabad 0): the fresh solution was in 0.9% saline, with the dispersion of 2-3 drops of Tween 80.

MES Induced Seizures: The results of the present study show that Celecoxib in the doses of 2.5mg/kg ip and 5mg/kg ip, failed to produce any significant reduction in the duration of any phase of MES induced seizures (P>0.05) Table 1-4, Fig. 1. On increasing the dose of celecoxib to 10mg/kg ip, a significant decrease in the duration of tonic hind limb extension (index of antiepileptic activity) (P<0.001) Table 2, Fig. 1 was found, without any change in any other phases of MES challenge (P>0.05) Table 1-4, Fig. 1. 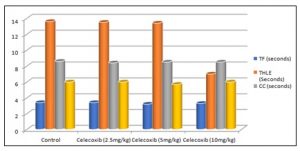 PTZ Induced Seizure: Celecoxib was administered in the dose of 10mg/kg ip and 20mg/kg ip. The animals were observed for about 30 min.

TABLE 6: EFFECT OF COX-2 ON DURATION OF CLONUS IN PTZ INDUCED SEIZURES IN MICE 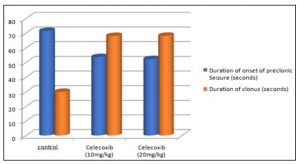 FIG. 2: EFFECT OF CELECOXIB ON DURATION OF ONSET OF PRECLONIC SEIZURES AND CLONUS ON PTZ INDUCED SEIZURES IN MICE

DISCUSSION: Results of the present study correlates with the significant antiepileptic activity of selective COX-2 inhibitor, celecoxib, in MES induced seizures. COX-2 is responsible for the pathological production of prostaglandins in response to a variety of stimuli from proinflammatory factors (e.g., cytokines and endotoxins), seizure activity, brain injury to the activation of NMDA receptors (main receptors for the excitatory neurotransmitter, L- glutamate) 8. COX – 2 proteins significantly increase in the hippocampi of genetically seizure susceptible E1 mice 9. The role of inflammation in the excitotoxicity induced by overstimulation of glutamate receptors using kainic acid and neuronal cell death, especially in CA1 and CA 3 areas of hippocampus has been investigated, and it has been hypothesized that inhibiting neuroinflammation after kainic acid injection will produce less inflammation, less cell loss and enhancement of cognitive function or both. In previous studies, brain-derived neurotropic factor levels were examined, and results confirmed the above hypothesis that kainic acid injected rats treated with a selective COX-2 inhibitor (after kainic acid injection) performed better in the spatial and non-spatial tasks. There was not any improvement if celecoxib was given before kainic acid treatment. This underlines the importance of the production of PGs at the beginning of inflammation 10. Some researchers have studied the anticonvulsant action of pre-treatment of celecoxib in electroshock induced convulsions and found that celecoxib in dose-dependent manner increases the (a) CC50 (threshold current inducing THLE in 50% of animals; (b) Percent protection of animals 11. Although Celecoxib suppresses epileptogenesis, this inhibitor may be more effective for post-seizure inflammation than for the prevention of seizure incidence 12. Possible dual roles might partly explain these conflicting results for COX-2, which has been shown to play early neuroprotective and late neurotoxic roles following seizures 13. Thus, limiting COX-2 inhibitor administration may be crucial when treating epilepsy. The bifunctional aspects of COX-2 in epileptogenic can be explained by the diversity of PGs. PGD2 & PGF2α exhibit anticonvulsive functions; hence PGD2 synthetase knockout mice showed more severe seizures after PTZ treatment 14, and the intracisternal administration of PGF2α after KA treatment reduced the seizure score and mortality 15. On the other hand, PGE2 mainly functions as a promoter of epileptogenesis, and the administration of PGE2receptor (EP) antagonists reduces seizure severity and neuronal injury following pilocarpine or PTZ-induced seizures 16, 17, 18.

The above studies explain that the differential effects of COX-2 inhibitor son animal models of epilepsy depend on the administration timing. In contrast to the anticonvulsant effect in MES model, celecoxib, in the present study, displayed a proconvulsive activity in the PTZ seizure model. It showed a decrease in the latency to preclonic jerk and significantly increased clonus duration (P<0.01). The explanation for this differential effect in two models of seizures lies in the two test paradigms. In MES, THLE occurs first, followed by clonic episodes, whereas in the PTZ test, latter events precede the phase of THLE 19. In the PTZ test, besides a decrease in GABA activity due to PTZ, there is evidence of an increased excitatory amino acid activity, which is relative to GABA in the beginning but is further exaggerated as a result of nitric oxide-induced upregulated excitatory amino acid release 20.

The increased excitatory amino acid release is mainly responsible for the prolonged/continuous phase of clonic or even clonic-tonic seizure activity 21, 22. Due to the blockade of up-regulated COX -2, there is a blockade in PGs synthesis but did not affect increased excitatory amino acid activity; therefore, the COX-2 inhibitor was observed to enhance the PTZ convulsive effect. COX-2 inhibition results in the accumulation of arachadonic acid due to inhibition of its metabolism to PGs. This accumulated arachidonic acid has shown to block GABA – gated chloride channel 23. Also, it has been established that the reis enhancement of excitatory amino acid activity in PTZ induced seizures. Thus, in the present study, both of these effects may be contributing to the observed exaggerated PTZ response in animals pretreated with a COX-2 inhibitor.

CONCLUSION: There are increasing evidence on the role of inflammation and COX-2 (a pro-inflammatory enzyme) in epilepsy pathogenesis. The results of the present study substantiate the applicability of COX-2 inhibitors as a therapeutic approach in the management of generalized tonic-clonic (GTC) seizures (as the drug was found to be effective against MES induced seizures) but not in the absence of seizures (as the drug was found to have proconvulsive effect in PTZ induced seizures). Further studies should be done to improvise selective COX-2 inhibitors and optimize their use without any complications.

ACKNOWLEDGEMENT: The contribution, commitment, and dedication of study participants, practitioners, and my colleagues who participated in the study are gratefully acknowledged. We thank Dr. Sadhna Kaushik, Prof/HOD, Department of pharmacology, MLB Medical College, Jhansi, and Dr. Anil Kaushik, Prof/ HOD, Department of Pediatrics, MLB Medical College, Jhansi for their suggestion, supervision, a constant source of inspiration and to use the facilities of college during the study. I extend my sincere help to lab technician Mr. Satyendra Gupta for providing technical help.

Author’s Contribution Statement: Ashish Jain and Raina Jain conceived of the presented idea. Raina Jain developed the theory and performed the computations. Ajay Upadhyaya verified the analytical methods. All authors discussed the result and contributed to the final manuscript.

CONFLICTS OF INTEREST: Conflicts of interest declared none.