INTRODUCTION: Wound is defined as the disruption of the cellular and anatomic discontinuity of a tissue. Healing of wound is a biological process that is initiated by trauma and often terminated by scar formation. The process of wound healing occurs in three phases such as inflammatory phase, proliferative phase and remodelling phase 1. In India, there has been interest in the potential of medicinal plant for development of drugs with wound healing properties as taught in a popular form of Indian medicine known as Ayurveda 2. Fenugreek, Trigonella foenum-groecum L., is an annual herb grown in various countries around the world.

It was thought to be indigenous to the countries bordering on the eastern shores of the mediterranean, 3 but now is widely cultivated in India, China, northern and eastern Africa, and parts of Europe and Argentina 4. Fenugreek seeds are used as a tonic, as well as a treatment for weakness and edema of the legs. In India, fenugreek is commonly consumed as a condiment 5 and used medicinally as a lactation stimulant 6. In the light of Trigonella foenum graecum use in the management of diverse diseases and treatment of skin ulcer in folklore medicine, the present study was conducted to evaluate the excision and incision wound healing capacity of Trigonella foenum graecum seed extract in experimental rats.

Collection and preparation of plant sample: Trigonella foenum graecum seeds were collected from authorized suppliers. Dirt was removed from the plant by rinsing in clean water. The seeds were air-dried for three weeks and pulverized using motorized blender

The resulting powder of Trygonella foenum graecum seeds was submitted to dynamic maceration with ethanol 70% for 4 h. This procedure was repeated three times with the same powder. After filtration, the residue was discarded and the solvent evaporated at 40°C under vacuum to obtain the hydroalcoholic extract of Trigonella foenum graecum (HETG) 7.

The HETG was subjected to preliminary phytochemical screening for the presence or absence of phytoconstituents 8.

Hydroalcoholic extract of Trigonella foenum graecum was used for the preparation of the ointment for topical application 8. A 5% and 10% (w/w) of extract ointment was formulated 9 (Table 1)

Healthy albino rats were procured after taking permission for animal studies from Institutional Animals Ethics Committee (XII/VELS/PCOL/25/ 2000/CPCSEA/IAEC/08.08.12). Rats of either sex, weighing between 200 g and 220 g were obtained from the animal house of the C. L. Baidmetha College of pharmacy. The rats were housed in polypropylene cages on normal food and water ad libitum. Animals were periodically weighed before and after experiments. The rats were anaesthetized prior to infliction of the experimental wounds. The surgical interventions were carried out under sterile conditions using ketamine anaesthesia (10 mg/kg). Animals were closely observed for any infection; those which showed signs of infection were separated and excluded from the study. An acute toxicity study was conducted for the extracts by the stair-case method 10.

Excision and incision wound models were used to evaluate the wound – healing activity of hydroalcoholic extract of Trigonella foenum graecum(HETG) and was treated as following:

Group I: control (Simple ointment only)

The back of the animals were shaved and sterilized with 70% ethanol before 7 X 7 mm excision wound was created by a surgical blade from a predetermined shaved area on the back of each animal 9. The wound was left undressed to the open environment and no local or systemic antimicrobial agents were used. This model was used to monitor the rate of wound contraction. The experimental groups were topically applied with the extract twice daily for consecutive 14 days.

The group treated with Povidone iodine drug served as a reference. A progressive decrease in the wound area was monitored for 14 days. The wound contractions were measured by a tracing paper on the wounded margin and calculated as percentage reduction in wound area. The actual value was converted into percentage value taking the size of the wound at time of wounding as 100 %. The granulation tissues were removed on the 5, 10 and 14th post wound days and analyzed for protein content (collagen). The animals were divided into 3 groups of four rats each 11.

A longitudinal para-vertebral incision of 5 cm in length was made through the entire thickness of the skin and cutaneous muscle with the help of a scalpel 11. After complete homeostasis the wound was closed by means of interrupted sutures placed at equidistant points of 1 cm apart. The sutures were removed on the 8th post wound day and the topical application of extract ointment and oral administration of the extract continued. The animals were divided into four groups of four animals each. The skin-breaking strength was measured by the method of Lee 12 on the 14th day evening after the last application. Then the granulation tissue was taken for further studies.

Collagen content was estimated in terms of hydroxyl proline.  The samples of healed skin were hydrolyzed by autoclaving for 4 hours in 6 N HCl. To the hydrolyzed skin sample, 1 mL of copper sulfate (0.01 M) and 1.0 mL of NaOH (2.5 N), followed by 1.0 mL of hydrogen peroxide (6% vol/vol), were added to each tube. Tubes were capped tightly and heated for 5 minutes at 80°C and were cooled to room temperature. To all tubes, 4 mL of 3 N sulfuric acid was added by agitation in cold condition. Two milliliters of p-dimethylaminobenzaldehyde (5% solution in n-propanol) solution was added to each tube and vortex-mixed for 2 minutes. Once again, all the tubes were heated to 70°C for 15 minutes. Tubes were cooled, and optical density was read against a reagent blank at 540 nm 13.

The healing tissues obtained on the 11th day from all four groups of animals of the incision wound model were processed for histological study. The amount of collagen was quantified using Vangeison stain 14.

The administration of this HETG 5%w/w and 10%w/w accelerated the progression of wound healing by 14th day by 80.39% and 100% compared with control 30.76%  in incision wound model(Table 4) and showed significant increase in breaking strength (P<0.01). Both HETG 5%w/w and 10% w/w animals showed increased hydroxyproline content (P < 0.001) when compared with the control group of (Table 5).

TABLE 3: EFFECT OF EXTRACT ON COLLAGEN CONTENT OF THE GRANULOMA TISSUE IN RATS (EXCISION WOUND MODEL)

TABLE 5: EFFECT OF EXTRACT ON HYDROXYPROLINE AND BREAKING STRENGTH 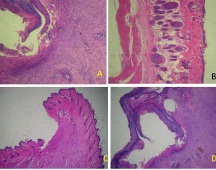 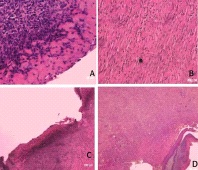 DISCUSSION: Wound healing is an intricate process in which the skin (or another organ) repair itself after injury 16. Proliferation phase in wound healing consists of granulation, contraction and epithelialisation. Understanding wound healing involves understanding of inflammation, proliferation, and maturation phase 17. The granulation tissue of the wound is primarily composed of fibroblast, collagen, edema, and small new blood vessels. The undifferentiated mesenchymal cells of the wound margin modulate themselves into fibroblast, which start migrating into the wound gap along with the fibrin strands. The collagen composed of amino acid (hydroxyproline) is the major component of extra cellular tissue, which gives strengthand support. Breakdown of collagen liberates free hydroxyproline and its peptides 18. Measurement of the hydroxyproline could be used as an index for collagen turnover 19. The data depicted in table 4 showed that the hydroxyproline content of the granulation tissue of the animals treated with HETG 200mg/kg and HETG 400mg/kg was significantly increased when compared to the control.

Thus, wound-healing property of hydroalcoholic extract of TrigoneIla foenum graecum may be attributed to the phytoconstituents present in it, which may be either due to their individual or additive effect that fastens the proliferation process of wound healing. At this stage, it is difficult to say which component(s) of the extracts are responsible for this proliferative action. However, further phytochemical studies are needed to isolate the active compound(s) responsible for these pharmacological activities.