ABSTRACT: One of our greatest challenges in improving nation’s economy is to reduce the dependence on imported petroleum products. To accomplish this, we need a variety of alternative fuels, which includes ethanol produced from cellulosic materials. Cellulose is a rich natural biopolymer on earth and most dominating agricultural waste. Apart from the fossil fuels, bioethanol is used as chief renewable energy source found on earth. Hence, we developed the structural molecular model of the endoglucanase III from Trichoderma reesei by homology modelling using Modeller 9v12. Based on sequence similarity with protein of known structure (PDB ID: 1H1N) was chosen from PDB by using protein BLAST. The models were evaluated by PROCHECK.  Resulted Ramachandran plot analysis showed that conformations for 99% of amino acid residues are within the most favored regions.  A possible active site was identified in the model using Sybyl6.7. The predicted model permits initial inferences about the unexplored 3D structure of the endoglucanase III and may promote in relational designing of molecules for structure-function studies.

INTRODUCTION: Biofuels provide a potential route for avoiding the global political instability and environmental issues that arise from reliance on petroleum. At present, most of the biofuel is in the form of ethanol generated from sugar or starch, but this can meet only limited areas of global fuel requirements 1. To reduce the energy cost, low-acid/temperature pretreatments 2 were attempted, but it is still necessary to add large amounts of cellulolytic enzymes to hydrolyze the cellulose material. In this current study Endoglucanases were engineered for broad specificity, pH, temperature and activity.

Endoglucanases cut at random at internal amorphous sites in the cellulose polysaccharide chain, that generates oligosaccharides of various lengths and consequently new chain ends. As endoglucanase (EG) is a key component of cellulase which it degrades the cellulose material, a polymer to be smaller monomers and have been used in various industries like textiles, fruits and vegetable processing, and recently in bioethanol production 3.

Due to these essential applications of endoglucanase, and remaining cellulases various protein engineering approaches have been employed to enhance the functional properties of these enzymes to achieve better performance 4. As ethanol production is cheaper than liquid petroleum, the production of ethanol depends on simultaneous saccharification of cellulose to glucose and fermentation of glucose to ethanol by a recombinant yeast strain as a microbial biocatalyst. Recombinant yeast strain expressing endoglucanase and β-glucosidase was able to produce ethanol from β-glucan, CMC and acid swollen cellulose 5.

Yeast cell-surface is a technique used in protein engineering that enables 104–105 enzymes to be displayed on the surface of a yeast cell 6. The surface displayed yeast can be used as a whole-cell biocatalyst without requiring enzyme-separation and purification processes, and it can immediately in take glucose degraded from cellulose and thus, it is hardly contaminated by other organisms. Furthermore, direct fermentation to ethanol from cellulose could be conducted by using cellulase surface displaying yeast 7. This reduces the chance of contamination and high efficiency of product yield with low economic value of bioethanol production 8.

The protein sequence of endoglucanase of “Trichoderma reesei” was retrieved from NCBI database (National Center for Biotechnology Information) which have 418 amino acid residues, accession number (Genbank id) is AAA34213.1 for modeling. Homology modeling usually starts by searching the PDB (Protein Data Bank) of known protein structure using a query sequence. This search is generally performed by comparing the target sequence with the sequence of each of the structure in the database. The protein sequence of 1HIN (template) worked as a target sequence. For identification of appropriate template BLASTp was performed against Protein Data Bank, select templates for generating the putative 3D structures.

The method of comparative modeling requires identification of homologous sequences with existing structure. The first step of comparative/homology modeling, scanning and selection of template protein structure was carried out using the target sequence as query 9. A sequence similarity search by BLAST program was carried out with query sequence against proteins whose solved structures had been deposited in the Protein Data Bank (PDB) to find related proteins as templates. BLASTp generally used for template selection procedure [http: //blast.ncbi.nlm. nih. gov/ Blast] 10. The BLAST analysis outputted potential template for modeling is 1H1N, the high degree of primary sequence identity (99%) between target and endoglucanase III indicates that this crystallographic structure was good model to be used as template for endoglucanase III enzyme.

The alignment of the endoglucanase III target and 1H1N is shown in (Figure 1). A total of 20 models were generated using program MODELLER 9.11. MODELLER implements comparative protein modeling by satisfaction of spatial restraints. Comparative initial alignment was done by using clustalX. 11 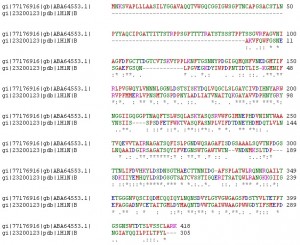 Modeller generated the 20 models for the same target, out of which the best model can be selected for further analysis. We evaluated the model with the lowest value of the Modeller objective function and PROCHECK results. The stereochemical quality of the developed models for endoglucanase III enzyme using Ramachandran's plot calculation computed with PROCHECK 12.

The SITE ID module of Sybyl 6.7 13 is a suite of programs for identifying and characterizing binding sites and functional residues from protein structure. In this study, the active site search program was used to search the protein binding sites by locating binding pockets studied structure. Through comparing the conserved residues in family of the studied protein and combining the search results and other experiment results, the binding sites of Endoglucanase III were predicted. Those results were used to guide the following docking experiment.

FlexX automated docking software used for docking simulation 14 installed on Silicon Graphics Inc octane2 workstation using the package SYBYL 6.715 to investigate the binding mode between the inhibitors and Endoglucanase III receptor. The flexible docking program uses incremental construction algorithm, which employs the preparation of receptor by adding hydrogen’s and assigning Gasteiger Huckel charges, and saved it in PDB file. The ligand cellulose was minimized by assigning Gasteiger charges and non polar hydrogen’s. The incremental construction algorithm is known to be the most efficient and reliable method of FlexX.

In the present study, the primary sequence identity between endoglucanase (target) and Trichoderma reesei indicates that ~90% sequence identity. Medium accuracy model, obtained with a template-target sequence identity of 50-60%. The sequence analysis result based on BLASTp, a number of models had been generated for each binary complex and the final model selected based on MODELLER objective function.

In the current research work, experimental structure of endoglucanase of Trichoderma reesai is not available in Protein Data Bank (PDB), homology modeling approach was used in order to derive their structure. BLAST search results had shown higher similarity with crystal structure of IHIN, while the template was selected on the basis of higher sequence identity. It shows 99.0% sequence identity, with maximum conserved residues. Comparative modeling predicts the 3-D structure of endoglucanase III model of given protein sequence (target), based primarily on this alignment to the template. The developed model was also checked for phi and psi torsion angles using Procheck for Ramachandran plots.

All together 98% of the residues were found to be in core and allowed regions, which validate the quality of predicted homology models. Visualization and analysis of the model using Swiss PDB Viewer (spdbv) reveals that there are no steric hindrances between the residue and thus modeled structure are stable. Target structure-template structure superimposition was done in order to calculate Root Mean Square Deviation (RMSD) between the target and template sequence. This implies good quality of the modeled structure (Figure 2) and ramachandran plot (Figure 3) of Endoglucanase III. 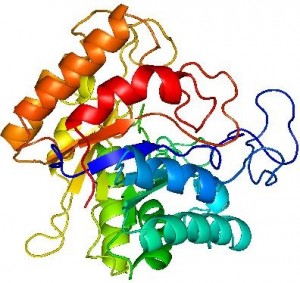 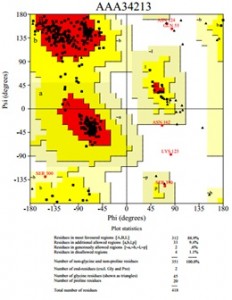 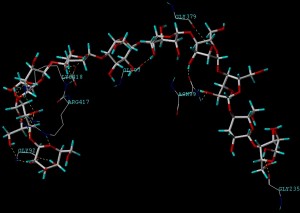 B. Chandrasekhar and B. Bhima*