The prophylactic efficacy of garlic (Allium sativum Linn.) (Alliaceae) extract was studied on changes in WBC differential count pattern in male albino rats. The rats were divided into four groups A, B, C and D, keeping group A as a healthy control. The garlic extract was tried in three different doses, 1ml, 2ml and 4ml/ kg body weight as low, medium and high dose respectively and given orally for the period of 7, 14, 21 or 28 days daily to the rats of group B, C and D as stated above. The results clearly indicate that a significant increase (P<0.01) in lymphocyte and eosinophil percent and a significant decrease (P<0.01) in neutrophil and monocyte percent at low and medium dose but at higher dose their percentage increases within the normal values. This investigation indicates not only the benefits and drawback of raw garlic but also its uses in regulation of certain parameters for well-being of individuals.

INTRODUCTION:Medicinal use of garlic (Allium sativum) has existed for centuries, but its therapeutic and pharmacologic properties still needs more investigation. Epidemiologic studies in the past 10 years have revealed an inverse relationship between garlic consumption and the incidence of certain forms of diseases, including stomach, colon and laryngeal cancers 1.

The importance of garlic was recognized many centuries ago, in early Egyptian, Chinese and Indian civilizations as a herbal or traditional medicine. Today, in many parts of the world garlic is being used both as prophylaxis and for the cure of variety of diseases including acute and chronic infections, gastritis, dysentery, typhoid fever, cholera, tuberculosis, pneumonia, diabetes mellitus, heart disease and hypertension 2.

Garlic is the most commonly used herbal remedies and is considered to have hypo-cholesterolemic as well as other cardioprotective properties 3. Allicin, diallyl disulfide-oxide, an active ingredient released from garlic (alliin) is a systemic vasodilator 4. Ether extracts of garlic and partially purified distilled extracts of garlic have been reported to inhibit human platelet aggregation in vitro 5.

Treatment with garlic extracts was found to improve the activation of natural killer cells, the function of T-lymphocytes 6. Effect of garlic in vitro and in vivo studies showed that aged garlic extracts stimulate immune functions. Medicinal use of Allium sativum (garlic) has existed for centuries, but its therapeutic and pharmacologic properties still needs more investigation.

In the traditional system of medicine, extract of garlic & herbal formulation are used as drug of choice rather than single drug.

Information on traditional uses of raw garlic extract and their effects on differential count of WBC created attention to find out whether the raw Allium sativum extract can be used to alleviate some of the risk factors associated with these parameters in mammals.

The Extract: Six months old (after harvest) garlic bulbs were collected from the local market. Garlic bulbs were separated, peeled and washed with distilled water. After drying in shed, about 500 gm of clean garlic bulbs were crushed with the help of electronic grinder. The extract was strained through muslin cloth after squeezing the crushed materials 7.

Experimental Animal: Healthy adult male albino rats weighing approximately 150 – 200 gm were selected for the experiment. All animals were acclimatized for a week in the laboratory before use 8. The animals were housed five per cage under controlled conditions of a 12 h light/dark cycle, 50% of humidity and 26°C ± 2°C, and minimum noise levels 9. Animals had free access to tap water ad libitum and normal diet.

Experimental Design: The animals were divided into four groups. Group A animals, which served as healthy control, were given normal feed and tap water ad libitum throughout the experiment. Group B, C and D animals were fed with 1ml, 2ml and 4ml/ kg body weight garlic extract daily for 7, 14, 21 or 28 days daily. In all the groups the extract was force fed with by using ball – tipped needle every day between 11.00 a.m. to 12.00 pm 10, 11.

Differential Count Studies: The rats were anaesthetized with ether on day 7th, 14th, 21st and 28th day, after which heart puncture was carried out to collect the blood directly in BD Vacutainer® K2 EDTA bottles (made in USA). This collected blood was used to determine lymphocyte%, eosinophil%, neutrophil% and monocyte%. These parameters were analyzed by fully automated Haematological Analyzer, Sysmex (Model No: KX – 21) {Sr. No. B – 1163} made in Japan.

Statistical Analysis: All the experiment was adequately replicated and subjected to statistical analysis by two way analysis of variance (ANOVA), followed by Student’s t-test, wherever required 12.

Effect on Eosinophil%: It is evident from the results that administration of garlic extract increases or decreases eosinophil% significantly (Table 1, Fig. 1). In group B and C individuals, the eosinophil% was significantly increased (P<0.05) to the extent of 26.32% and 19.74% respectively whereas in group D individuals a significant decrease (P<0.05) of 17.72% in eosinohil% was observed.

Mechanisms responsible for an increase in blood leukocyte pattern after administration of garlic extract are not known. The increased number of WBCs may result from the ability of some garlic extracts to inhibit neutrophil migration 14, 15.

TABLE 1: PERCENT CHANGE IN LEVEL OF LYMPHOCYTE%, NEUTROPHIL%, EOSINOPHIL% AND IN MONOCYTE% AFTER FOLLOWING THE PROGRAMMED FEEDING OF ALLIUM SATIVUM (GARLIC) EXTRACT DAILY FOR 7, 14, 21 OR 28 DAYS RESPECTIVELY IN MALE ALBINO RATS 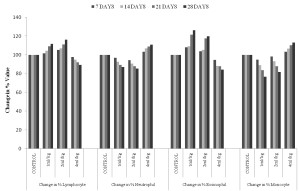 There are no records about an influence of garlic on migration of other leukocytes. Results show that administration of garlic causes the activation of both non-specific (granulocytes, monocytes, lysozyme) and specific (lymphocytes, IgG) defence mechanisms 16. Garlic given for a longer period was observed to cause a significant increase in total white blood cell (TWBC). These data, therefore, get support from the earlier findings of that garlic extracts stimulate immune functions 17. This observation may partly explain the role of garlic in activating the natural killer cells, the function of T-lymphocytes and the level of interleukin – 2 6.

CONCLUSION: In conclusion, our results show that administration of garlic extract causes the activation of both non-specific (granulocytes, monocytes, lysozyme, Cp) and specific (lymphocytes, IgG) defence mechanisms and influences favourably growth rate and systemic development of the investigated animal. Our present study also confirmed that garlic preparations can be used as very attractive alternativefor antibiotic growth promotors in nutrition, especially what concerns their impact on animal performance.

ACKNOWLEDGEMENT: Authors are thankful to University Grant Commission, New Delhi, Letter No. F. No. 34- 414/ 2008 (SR) for their financial support.