ABSTRACT: According to Brazilian regulation, the registration of phytomedicines must inform the characterisation of, at least, one of their constituent. In order to contribute to this goal, a tincture of Cissus verticillata (L.) Nicolson & C.E. Jarvis prepared with ethanol 96oGL was investigated. This plant species is widely used due its hypoglycaemic properties, to control diabetes, and empirically to treat the consequence of cerebral vascular accident. Thus, this work reports the evaluation of the flavonoid content in the tincture and the characterisation of flavonoid glycosides, because flavonoids can be part of the active constituents of this herbal drug, and also because these substances can be used as markers. This article both confirms the presence of several flavonoids previously detected in this herbal drug and reports the presence of others not previously described and are characterised in this species for the first time. The flavonoid content in the tincture, determined as Rutin using UV spectroscopy, is 3.6g% of tincture. A method based on reversed phase (RP) HPLC analysis was developed and allowed good separation of the flavonoids found in C. verticillata. Aglycones and both O- and C-derivatives of the flavonoids are easily and also adequately separated.

INTRODUCTION:Medicinal plants, according to the Brazilian regulation, must be standardized in order to be introduced in the basic health system or used in the development of a phytomedicine 1. Tinctures, used in the pharmaceutical praxis as component of phytomedicines, are very useful pharmacopeic derivatives of plant material; they can be manipulated as ingredients in many liquid formulations, and can also be used after evaporation to dryness in solid and semi-solid formulations.

The Brazilian Pharmacopoeia contains a general monograph about tinctures in which the mode of preparation and the proportion of the herbal drugs in the extract are specified 2. Many tinctures marketed in Brazil are prepared with ethanol 70ºGL or absolute ethanol, depending on the metabolic class to be extracted.

The leaves of Cissus verticillata has alleged popular use as hypoglycemic remedy in Northern (Amazonia) 3, in Northeastern 4 and Southern Brazil 5. The detection of phenolic compound in the secretion of idioblasts as well the occurrence of flavonoids glycosides in this plants species corroborate the objective of this work since flavonoids are already detected in Cissus and show hypoglycemic activity 6.

Our group investigated the aqueous extract and the tincture prepared from Cissus verticillata. The hypoglycaemic property of this herbal drug was determined in rats treated with aqueous extract in which the presence of flavonoids glycosides could be observed 7, the same results were observed for Cissus quandrangularis rhizome extract 8. Likewise, the acute exposition of humans to a decoction of dried leaves of the plant produces hypoglycaemic effect at 120 minutes 9.

Our group works investigating substances present in pharmacopeic preparations obtained from medicinal plants, which can be used to standardise the plant species, its derivatives and products. Here, we report the flavonoid content of the tincture prepared from leaves of C. verticillata. The chromatographic profile of flavonoids from C. verticillata shows peaks with retention times and spectra very similar to those obtained from Passiflora incarnata L. (Passionflower).

Solvents: The water used as eluent was purified by a Milli-Qplus® system from Millipore (Milford, MA, USA) and acidified to pH = 3.2 by addition of 85% formic acid obtained from Carlo Erba (Milan, Italy); HPLC-grade Acetonitrile and Methanol were from Merck (Darmstadt, Germany).

Determination of the Total Flavonoids content: The total flavonoid content was determined using a procedure based on the method developed and validated by Silva 12 where 500 mg of extract were treated with methanol, under reflux. The methanolic solution is taken to 50 mL, from which 10 mL are partitioned between water and chloroform. The hydromethanolic phase added of glacial acetic acid, pyridine and methanolic solution of aluminium chloride is analysed under UV light at 420 nm. The total content in flavonoids is expressed in grams of Rutin per 100g of tincture.

The flow rate was 0.8 mL min-1. Before analysis tincture of C. verticillata was filtered through PTFE membrane filters 0.2 µm. The volume of sample solution injected was 10 µL. UV-Vis spectra were recorded in the range 190-450nm, and chromatograms were acquired at 230, 254, 280, 330 and 350 nm. Typical chromatograms at 280 nm and at 350 nm of Cissus (CIS9POS) and comparison with Passionflower (PASSIEU) samples are depicted in figure 1 and 2, respectively.

Instrumentation for HPLC-MS Analysis: The analysis was conducted using 1100 MS detector interfaced to the above-described HPLC system by an 1100 MSD API-electrospray (ESI), instruments from Agilent Technologies (Palo Alto, CA, USA). The interface geometry, orthogonal positioning of the nebulizer relative to the capillary inlet, enabled the use of analytical conditions similar to those used for HPLC-DAD analysis.

The column, time and flow rate used were the same as those described above, without appreciable variation of the chromatographic profile. Full scan spectra from 100 m/z to 800 m/z were obtained in positive-ion mode; the scan time was 1 s. The volume of sample solution injected was 10µL.

Identification of Constituents: The structural identification of each compound was carried out mainly based on its UV spectrum, retention time on reverse phase, and MS spectra obtained by applying different fragmentation energies with the API/ESI technique.

Moreover, the use of standard reference compounds and/or laboratory extracts helped to complete the identification.

RESULTS AND DISCUSSION: The table 1 shows the comparison of HPLC-MS data obtained from a tincture of C. verticillata to those of Passiflora incarnata which allows characterising the compounds listed therein 8, 13. All peaks show very similar retention time in both chromatograms (Figure 1 and 2). 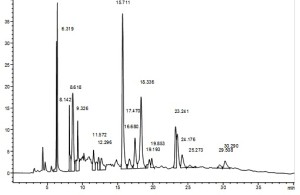 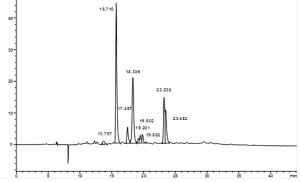 FIGURE 1:  CHROMATOGRAPHIC PROFILE AT 280nm (a) AND 350nm (b) OF CISSUS VERTICILLATA 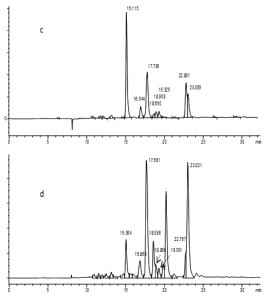 Comparing retention times, UV-Vis and mass spectra of these substances to those obtained from Passiflora incarnata and using the information available in the literature 14 the flavonosides of C. verticillata could be characterised. The peaks A and Abis present analogous mass spectra in positive mode exhibiting [M+H]+ and [M+Na]+ ions at m/z 595 and 617.

The structure of peak A, the most polar glycoside in the sample, was mainly determined by the fragmentation pattern of its MS spectrum in negative ion mode in agreement with a previous report 15 and due the UV-Spectrum showed in Figure 3. These data suggest the presence of an apigenin nucleus bounded to two glucose moieties, and thus it could be characterised as vicenin-2 or apigenin-6, 8-di-C-glucoside 16. 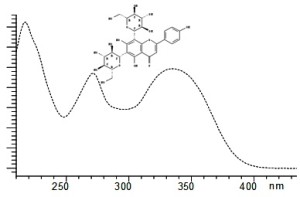 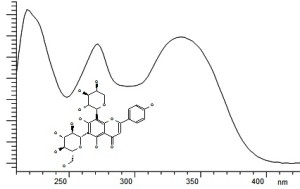 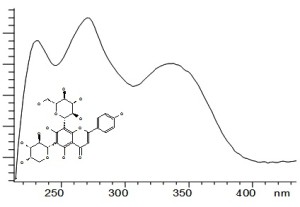 Peak D (minor constituent) was identified as homoorientin, by comparison of chromatographic and spectroscopic data with authentic samples.

These suggestions were confirmed by the typical fragment ions [M+ H-H2O]+ and [M+H-2H2O]+ that were evidenced at m/z 547 and 529. Other characteristic fragment ions [M+H- 2H2O-CH2O]+ and [M+H-5H2O-CH2O]+ were also evidenced at m/z 499 and 445. No differentiation was found between mass spectra of peak B putatively assigned to isoshaftoside and compound E and between mass spectra of peak C putatively assigned to shaftoside and compound F.

From these data, the minor constituents, peaks E and F, were identified as structural isomers of apigenin-6, 8-di-C-glycoside 16, as demonstrates Figure 6 which shows similar spectra for both substances. 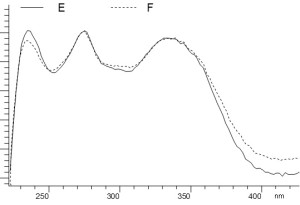 FIGURE 6: UV SPECTRA CORRESPONDING TO THE PEAKS E AND F

The peaks G and H at 22.80 min and 23.06 min respectively in the HPLC-DAD chromatograms of Cissus were identified as Vitexin and isovitexin respectively by comparison their chromatographic and spectroscopic data with authentic samples. These results allow to conclude that the tincture of Cissus verticillata at 96oGL contain at least eight flavonoid glycosides which can be used as quality markers of plant material, its derivatives and products. The detection and characterisation of these substances in pharmacopeic preparations, using LC-DAD and LC-MS, can be very useful in developing phytomedicines, once the isolation and characterisation of these substances by chromatographic and spectrometric usual methods demands more plant material, chemicals and time.

ACKNOWLEDGMENT: The authors are grateful to the National Council for Scientific and Technologic Development – CNPq, Coordination for the Improvement of Higher Education Personnel – CAPES, Foundation Pará Amazonia - FAPESPA and the Federal University of Pará – UFPA for material support.