ABSTRACT: Naturally occurring non-starch polysaccharides are known for their therapeutic value. This paper describes isolation, characterization and evaluation of glucose lowering potential of one such plant polysaccharide isolated from the leaves of the plant Vitex negundo. It was isolated and characterized using various analytical techniques and biochemical tests which confirmed the presence of carbohydrates and elements such as C, H and O. It demonstrated a reduction in glucose concentration in-vitro, however non-significant in comparison to standards. In-vivo, it was given per orally in fasting male C57 mice at 10, 30 and 100 mg/kg single dose post 30 min of which serum glucose was recorded. Glucose load was given 30 min after administering crude polysaccharide after which serum glucose concentrations were estimated at 15, 30, 60 and 120 min. Obtained results suggest a non-significant reduction in AUC as well as individual glucose levels at all the time points in crude polysaccharide treated animals in comparison to vehicle control in fasting as well as glucose loaded conditions. Thus, the crude polysaccharide isolated from the leaves of V. negundo doesn’t have a significant antihyperglycemic activity in single dose when given via per oral route in normal fasting as well as glucose loaded mice. It may have antihyperglycemic action on repeated dosing in glucose loaded diabetic animals, which needs further investigation. However, this paper is first to study anti-hyperglycemic potential of crude polysaccharide from leaves of V. negundo.

INTRODUCTION: Many phytoconstituents have been known for their therapeutic potential in-vitro as well as in-vivo. Plant polysaccharides are one of them which have been reported for their anti-inflammatory, anti-cancer, anti-hyperglycemic and anti-oxidant properties in various experimental models 1, 2, 3.

Vitex negundo is a plant from Verbanaceae family which is a woody aromatic shrub growing to a small tree having tri or penta-foliate leaves with quadrangular branches and bluish-purple flowers 4, 5. Entire plant has been reported in different systems of medicines for various activities however, seeds, roots, leaves and bark are mainly used. Traditionally, V. negundo has been used as anti-oxidant, analgesic, anti-inflammatory, as a vermifuge and in arthritis 4 and leaves are reported for antibacterial, antitumor, astringent, febrifuge, sedative, tonic and vermifuge 6. Plant mainly contains flavanoids, flavone glycosides, volatile oil, triterpenes, tannins and polysaccharides 6, 7.

Type II diabetes is a chronic metabolic disorder resulting from defects in insulin action and secretion. It is associated with other diseases such as obesity, hypertension, hyperlipidemia (increased VLDL, triglycerides and decreased HDL cholesterol), and cardiovascular disease, which is together known as ‘Metabolic Syndrome’. It is characterized by fasting and postprandial hyperglycemia and if not treated timely, can cause long-term microvascular and macrovascular complications, such as nephropathy, neuropathy, retinopathy, and atherosclerosis. Risk factors for diabetes include - obesity, sedentary lifestyles and diets rich in fats 11, 12. Insulin resistance is decreased responsiveness of target tissues (skeletal muscles, adipose tissues, liver) to normal circulating levels of insulin. As a result of insulin resistance, there is reduced glucose utilization, which leads to hyperglycemic conditions 13.

Considering the anti-diabetic potential of V. negundo leaves as well as various naturally occurring polysaccharides based on above reports, this paper aimed at isolating the crude polysaccharide from the leaves of V. negundo as per the reported method 20, characterizing it and evaluating its anti-hyperglycemic potential in-vitro using HepG2 cell line and in-vivo in normal male C57 mice post IPGTT (intraperitoneal glucose tolerance test). Anti-diabetic mechanisms of a plant extract / phytoconstituent can be attributed due to its insulin sensitizing, mimetic, secretogogue property or via inhibition of intestinal digestion and/or absorption of carbohydrates 2, 3. Main targets of insulin include liver, skeletal muscle and fat cells. Hence, in this paper, a preliminary attempt has been made to evaluate anti-hyperglycemic activity of the crude polysaccharide of V. negundo leaves.

Isolation of Crude Polysaccharide from V. negundo Leaves (Modified as Reported by Wang et al., 2013): 21 Fresh, mature leaves of V. negundo were collected from the botanical garden of K. B. Institute of Pharmaceutical Education & Research, Gandhinagar, Gujarat, India and were confirmed for the identity by the Department of Pharmacognosy, K. B. Institute of Pharmaceutical Education & Research, Gandhinagar, Gujarat, India (PH/HERB/14/001). Collected leaves were shade dried and powdered for storage in dry and air tight container. Shade dried leaf powder was treated with methanol till the solution turned colourless. This colourless dried leaf powder was then extracted with 3 parts of distilled water on a water bath for 2 h each time. The pooled water extract post filtration was allowed to cool and precipitated with 70% methanol until maximum precipitation was achieved.

Precipitated polysaccharides were separated by centrifugation, repeatedly washed with acetone, dried in oven (just to evaporate moisture not exceeding 40 - 50 ºC) and stored in an air tight vial till use. Crude polysaccharide yield obtained with this method was ~ 1.5% w/w.

Characterization of the Crude Polysaccharide Isolated from V. negundo Leaves:

FT-IR Spectroscopy (400 - 4000 cm-1) was performed to obtain fingerprints as well as identify functional groups and type of linkages present in crude polysaccharide 17 isolated from different batches of powdered V. negundo leaves. The sample was run on the Bruker instrument (3000 Hyperion Microscope with Vertex 80 FTIR System).

In-vitro Glucose Uptake Activity of Crude Polysaccharide from V. negundo Leaves Using HepG2 Cell Line: 23 HepG2 is a mouse liver cancer line which is well reported model to test insulin mimetic activity of herbal extracts / isolated phytochemicals. It gives idea about mechanistic aspect of the test substance such as involvement of membrane transporters (such as GLUT2 in liver cells) or liver enzymes which lead to glucose utilization. Experimental design to evaluate the glucose uptake potential of the crude polysaccharide from V. negundo leaves was slightly modified as reported by Zhang et al., 2008 23. HepG2 cells were maintained in DMEM culture medium containing 10% FBS, 2mM glutamine, 4.5 g/l (a high glucose condition) and antibiotics at 37ºC, 5% CO2. Once the cells achieved 80 - 90% confluency, they were detached from the culture flask with a solution of 0.25% trypsin and 1mM EDTA. Trypsin digestion was stopped by a complete media (DMEM with high glucose equivalent to 25 mM glucose) and plated in a density of 10,000 cells/well in a 96 well plate. 24 h post plating, they were incubated with different concentrations of PS (crude polysaccharide of V. negundo leaves), Metformin and Insulin under standard conditions.

In-vivo Anti-Hyperglycemic Activity of Crude Polysaccharide from V. negundo Leaves in C57 Mice: C57 mice are well reported animal model for type II diabetes 24 (Srinivasan and Ramarao, 2007). Male C57 mice of 8-10 weeks age were taken for the study. Animals were divided into five groups and kept on overnight fasting before treatment. They were labeled as follows:

Animals were approved by the IAEC (Registration number: KBIPER/2011/221) and were housed and acclimatized for one week in standard polypropylene cages (six animals/cage), maintained under controlled room temperature (22 ± 2 °C) and humidity (55 ± 5%) in 12 h /12 h light-dark cycle. Fasting blood collection was done and polysaccharide fraction was administered by oral route at 10, 30 and 100 mg/kg doses in overnight fasted mice. Vehicle system used to suspend the drug was 1% Tween 80: 1% PEG400: 0.5% CMC in deionized water. Glucose load (1.5 g/kg/10 ml) was injected intraperitoneally after 30 min of polysachharide administration. Blood was collected at 0, 15, 30, 60 and 120 min, after glucose load. Serum was separated and analyzed for glucose levels. Serum glucose was measured using Agappe Diagnostic Ltd., Kit, using Biotek Synergy Spectrophotometer.

Physicochemical Properties of the Isolated Crude Polysaccharide from V. negundo Leaves: Isolated crude polysaccharide from V. negundo leaves appeared dark brown in colour with amorphous texture and hygroscopic property. Its pH when solubilized in water was found to be 6 to 6.5. Its melting point was recorded as 293º to 296ºC. It is solubilized in hot water with sonication while partially soluble in solvents such as methanol, ethanol and DMSO.

Biochemical Tests for Confirmation of Polysaccharides: Biochemical tests confirmed the presence of carbohydrate and other possible constituents were found to be absent Table 1.

FT-IR Spectral Interpretation: 25 FT-IR spectra over a range of 400 - 4000 cm-1 indicated a similar pattern of spectra for all the batches of the crude polysaccharide isolated (all figures not shown here) at different time points, suggesting stability and non-degrading nature of compound when stored in cool and dry place in airtight containers. Moreover, “finger print region” which is generally exhibited by carbohydrates at maximum absorbance of 1200-950 cm-1 was also evident from the spectra. Additionally, OH stretching from carboxylic acids at 3500 - 2200 cm-1, aliphatic CH stretching at ~2918 cm-1, carbonyl stretching at ~1600 cm-1, C-O-C stretching from ethers and esters at 1200 cm-1. C-O-H stretching vibrations at ~ 1000 cm-1, confirmed the presence of polysaccharides and various functional groups present in the same Fig. 1. 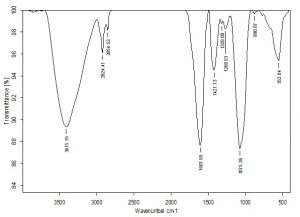 HRLCMS Interpretation: Molecular formula and mass of the isolated polysaccharide was found to be C24H48O23 and 705.12 respectively Fig. 2. 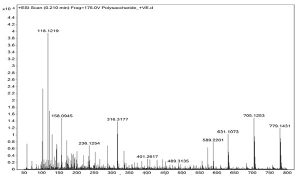 Elemental analysis of crude polysaccharide isolated from the leaves of V. negundo showed 66.52%, 23.8% and 7.1% of carbon, hydrogen and oxygen respectively.

% Change in Glucose Uptake in Crude Polysaccharide Treated HepG2 Cells: % Reduction in media glucose in treated cells was observed in all test groups, however it was non-significant and not concentration dependent Table 2.

TABLE 2: % REDUCTION IN GLUCOSE UPTAKE FROM MEDIA IN CELLS TREATED WITH VARIOUS CONCENTRATIONS OF METFORMIN (M1 TO M5), CRUDE POLYSACCHARIDE OF V. NEGUNDO LEAVES (PS1 TO PS7) AND MARKETED INSULIN PREPARATION (TORRENT PHARMACEUTICALS; I1 TO I7); N = 2 IN CASES THE READING WERE NOT OBTAINED DUE TO CONTAMINATION ISSUE; p NOT LESS THAN 0.05, ONE WAY ANOVA TEST FOLLOWED BY BONFERRONI’S MULTIPLE COMPARISON TEST

Effect of Single Dose Novel Crude Polysaccharide from V. negundo on Fasting Serum Glucose and AUC post IPGTT in Male C57 Mice: Novel crude polysaccharide isolated from V. negundo when given in a single oral doses of 10, 30 and 100 mg/kg in male C57 mice, decreased the fasting serum glucose levels as well as AUC120 min at all time points viz. 15, 30, 60 and 120 min post intraperitoneal glucose challenge but not at significant level in comparison to vehicle control Fig. 3 & 4. 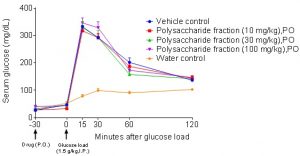 CONCLUSION: Physicochemical characterization of the crude polysaccharide of V. negundo confirm the presence of carbohydrate having C, H and O elements only with molecular mass ~705.12. Further detail characterization is a separate project in itself and since our primary objective is to evaluate glucose lowering activity of the crude polysaccharide of V. negundo leaves, we have performed basic characterization. Preliminary in-vitro data suggest that crude polysaccharide treated HepG2 cells did show a reduction in glucose concentrations i.e. enhanced glucose uptake process but at non-concentration dependent and non-significant level. This suggests possible insulin sensitizing and glucose lowering potential of the crude polysaccharide which can be better evaluated in-vivo. Hence, further in C57 mice, no significant reduction in fasting serum glucose was observed post treatment with 10, 30 and 100 mg/kg PO of crude polysaccharide (PS) vs. vehicle control which means PS does not have a direct effect on blood glucose levels. Moreover, post glucose load, no significant reduction in serum glucose levels at time points 15, 30, 60 and 120 min was observed in PS treated groups vs. vehicle control which suggest that single dose of PS is not effective in lowering blood glucose levels. Further in-vivo experiments with repeated dosing are required in diabetic animals to explore efficacy and mechanistic aspect of crude polysaccharide of V. negundo leaves.

ACKNOWLEDGEMENT: We are highly thankful to Zydus Research Centre, Ahmedabad, Gujarat, India for extending technical support for the in-vivo experiment.