Magnetic nanoparticles can be synthesized by the traditional chemical means such as coprecipitation or by biological systems3.

The critical parameters of nanomagnets are particle size, surface characteristics and good magnetic response2. Biosynthesised nanomagnets are superior to their chemically synthesized counterparts in the above said parameters3.

Chemical methods for the synthesis of magnetite use high energy inputs, toxic chemicals and nonpolar organic solvents and this retards the use of nanomagnets in biomedical field. Unlike chemical systems, the biological systems permit the synthesis at ambient temperatures, pressures and neutral pH conditions4. Biosynthesis of “magnetite” by magnetotactic and iron reducing bacteria has been studied extensively. Synthesis of magnetite by fungi is also being studied and like bacteria, magnetite is being synthesized intracellularly and extracellularly by fungi5.  Fungal biogenesis of magnetite offers many advantages like ease of handling and production. Intracellularly produced nanomagnets are reported to be detrimental to the target devices4 where as Fusarium oxysporum reduce metal ions extracellularly and produce stable nanoparticles6.

Magnetic nanoparticles are employed in both diagnostic and therapeutic medicine and are recently applied in various fields such as MRI imaging, water treatment, and hyperthermia and drug delivery systems.  Drug loaded magnetic nanoparticles have several advantages such as small particle size, large surface area, magnetic response, biocompatibility and non-toxicity7.

In the present study, the paramagnetic Fe3O4 nanoparticle was synthesized using F. oxysporum and the efficacy of the magnetite to be used in biomedical field was analysed. The size and shape of the particle was measured by Scanning Electron Microscopy (SEM) and Transmission Electron Microscopy (TEM), the topography was analysed by X-ray diffraction (XRD) studies and the magnetic behavior was analysed by Vibrating Sample Magnetism (VSM) curve. The toxicity of the nanoparticles was assayed by treating the human monocytes with nanoparticles through MTT assay.

Isolation and Microscopic characterization of Fungi

Duff soil samples were collected from different agriculture fields from the depth of 3 to 4 cm in sterile container. The samples were subjected to decimal dilution and plated in sterile Sabouraud's Dextrose Agar (SDA) plates. The plates were incubated at room temperature for 48 hours for adequate growth of mycelium and formation of spores.  The pure cultures were raised by subsequent subculturing in sterile SDA plates. The pure cultures were subjected to wet mount using Lactophenol cotton blue and examined under microscope. The cultures which were preliminarily identified as Fusarium sp.8 were tested for the synthesis of magnetite and the efficient isolate was stored at 4°C in SDA slant for further study.

The fungal DNA was isolated from the mycelium by modified method of Kamel et al9.  A small amount of mycelium was taken by filtration and 500 μl extraction buffer (200mM Tris HCl - pH 8.5, 250 mM NaCl, 25 mM EDTA and 0.5% SDS) was added. The mycelium was crushed mechanically using small mortar and pestle till the mycelium crushed completely.

The proteins were precipitated by adding equal volume of saturated phenol/Chloroform/ isoamyl alcohol (25:24:1) mixture kept at room temperature for 20 minutes. The contents were centrifuged at 10000g for the separation of protein precipitate and supernatant was collected in an another fresh vial.   For the removal of RNA, 10 μl of RNase (20 mg/ml) was added to the content and incubated at 40°C for 20 minutes. The DNA was settled by the addition of 0.6 volume of isopropyl alcohol and the settled DNA pellet was isolated by centrifugation at 12000g for 10 minutes at 4°C. The pellet was washed thrice using ethanol and finally suspended with 20 μl of TE (10mM Tris and 1mM EDTA) buffer.

The DNA sequence obtained was subjected to Basic Local Alignment Search Tool (BLAST) in GenBank/NCBI server. Besides, The ITS rDNA sequence of various soil habitat Fusarium spp. were collected from  Genbank  and were aligned with the help of  Clustal-X Ver.2.0 aligning tool. The aligned sequences were subjected to phylogenetic analysis using MEGA (Molecular Evolutionary Genetic Analysis) Ver.4.012.  Obtained original sequence was submitted in GenBank/NCBI through ‘Sequin’ submission tool and accession number was obtained

Fusarium oxysporum was cultured as described by Mukherjee et al13. After adequate incubation, the fungal mycelium was harvested by filtration aseptically and washed thoroughly using sterile distilled water. Around 10 g of wet fungal biomass was resuspended in 100 mL aqueous solutions of K3[Fe(CN)6] and K4[Fe(CN)6] (pH 3.1) at a 2:1 molar ratio in an Erlenmeyer flasks. The content was incubated at 30°C with 200 rpm agitation for 48 hours.

The product was collected by separating the fungal mycelia from the aqueous extract by filtration using Whatman filter paper. The filtrate was centrifuged at 1000 rpm for 10 minutes to obtain the pellet, washed using ethanol thrice and dried by evaporating the solvent in room temperature4.

The X ray diffraction pattern of the  obtained magnetic nanoparticles were analyzed by Powder X-ray diffraction (PXRD) by model Bruker AXS D8 advance with Cu (Kαλ=1.5406 Å) radiation, scanning range from 10°–90°. The morphology of the magnetic nanoparticles was revealed by Scanning Electron Microscopy SEM JEOL Model JSM - 6390LV and Transmission Electron Microscope by TEM Tecnai-10. The paramagnetism was analyzed by keeping the particles in magnetic field and the magnetization curves of the dried particles were recorded with a VSM at room temperature.

The cell suspension with more than 90% cells viability was considered for MTT assay. The cell suspension was diluted using MTT assay medium for the final concentration of 1.0 x 105 cells/ml and constant volume was dispensed in to assay plate. The plate was incubated at 37o C for overnight with 5% CO2, The nanoparticles  were dissolved in dimethyl sulfoxide (DMSO) and different concentration of nanoparticles were added in separate wells of previously incubated cell lines. The plates were further incubated for overnight in the same condition and density of the cells were measured.

In order to synthesize the magnetic nanoparticles, the fungi were isolated from the soil using SDA medium and screened to obtain F. oxysporum based on the colony morphological and microscopic characteristics. The fungal isolates that exhibited septate hyaline mycelium, slightly curved shape thin walled macro conidia in abundance and elliptical small micro conidia   were identified as Fusarium sp. Among the Fusarium isolates, the isolate showed high efficiency on synthesis of magnetite was considered for further study and the strain name was designated as SK.

Further confirmation of the identification was carried out by 18S ribosomal DNA analysis. The ITS1, 5.8S and ITS2 sequences of 18S ribosomal DNA were amplified altogether and sequenced.  The obtained sequence showed 507 nucleotide base pairs in size (Accession JX235357) was subjected to BLAST analysis which led to the inference that the isolated fungi was F. oxysporium. Further, the sequence was aligned with 18S ribosomal sequence of various Fusarium spp. derived from Gen Bank). The alignment results of the obtained sequence showed that the ITS1, 5.8S and ITS2 were present as 47-193, 194-351 and 351-507 nucleotide positions respectively and the ITS2 was found to be partial.   Phylogenetic tree was constructed using multiple aligned sequences and the result revealed that the Fusarium sp. SK was clustered with F. oxysporum with boot strap of 99% (Fig.1). Hence, the fungus was considered as F. oxysporum. 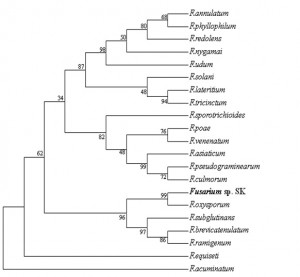 The seeking of Fusarium spp especially F. oxysporum in this experiment has some reasons because of its versatile properties for biosynthesis of various nanomaterials. Among the fungi, F.oxysporum is widely used in the research for biosynthesis of various metallic nanoparticles like gold, silver and platinum because of its capacity to reduce the inorganic metals by producing extracellular reductase enzyme. Besides, it has high level of intracellular metal uptake capacity, grow over the surface of inorganic substrate during culture and produce large amount of reductase enzymes with efficient way as a catalyst 5.

Accordingly, the Fe3O4 magnetite is synthesized by extracellular hydrolysis of the iron complexes by the cationic proteins secreted by the F. oxysporum which results in the synthesis of crystalline magnetite particles 4.

Synthesis and Characterization of Magnetite

The isolated Fusarium oxysporum SK was used for the biosynthesis of magnetic nanoparticles.  The biogenic nanoparticles were separated and purified. The particles were minute black crystal and showed dispersion in water, ethanol and other solvents. However, it showed poor dispersion in non polar solvents. The nanoparticle showed paramagnetism when the external magnetic field was applied. Most of the magnetite nanoparticles previously reported are crystalline and monodisperse in nature. Such nanoparticles can be easily dispersed in aqueous media than other polar solvents. The paramagnetism can be induced to dispersed magnetites and be accumulated by applying external magnetic field14.

There are many different possible iron oxide structures such as magnetite (Fe3O4), hematite (a-Fe2O3), or ferric hydroxide (b-FeOOH) 17 have been reported previously. According to the XRD data, the standard magnetite crystal has six diffraction peaks and marked to their indices as 220, 311, 400, 422, 511 and 440. This diffraction pattern corresponds to the spinel shaped structure and thus the biogenic iron oxide was confirmed to be a magnetite with spinel structure.

The hysteresis loops of magnetic nanoparticles were measured by Vibrating Sample Magnetometer and the magnetization curves of the biogenic magnetite are shown in Fig 3. The magnetite particles showed superparamagnetic character and the saturation magnetization was found to be 19.9emu/g.

The stable superparamagnetic structures find application in biological use when exploited by medical and pharmaceutical industries. In clinical applications, the particles can be accumulated inside the body by an external magnetic field due to their superparamagnetic property 19. The internal structure and surface morphology of the biogenic nanoparticles were investigated by Electron Microscopy. The SEM and TEM studies revealed that the surface morphology of the nanoparticles was spherical and the surface was found to be rough (Fig. 4a and 4b). 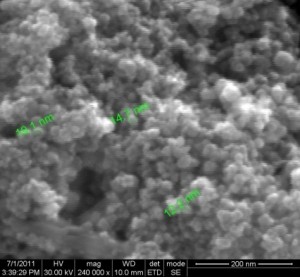 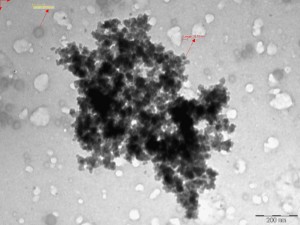 The use of nanoparticles as drug delivery system depends on their utility and safety. The toxicity of nanoparticles depends on various factors, including: size, aggregation, composition, crystallinity, surface functionalization21. The biogenic nanoparticles were checked for toxicity against human monocytes. For cytotoxic evaluation, MTT reduction was used to metabolically quantify viable cells after exposure to magnetic nanoparticles. The MTT assay for cell viability evaluation has been described as a suitable method for detection of biomaterial toxicity22.   The evaluation showed that there was no any cell damage or lysis before and after the assay (Fig. 5a and 5b). 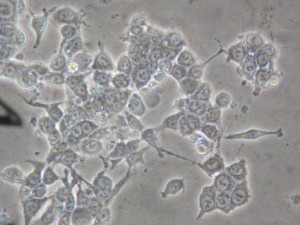 FIG. 5a HUMAN MONOCYTES BEFORE TREATMENT OF MAGNETIC NANOPARTICLES 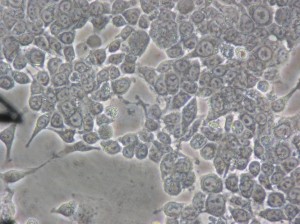 FIG. 5b HUMAN MONOCYTES AFTER TREATMENT OF MAGNETIC NANOPARTICLES

Magnetic targeting is useful for intravascular or intracavitary drug delivery, including tumor chemotherapy or intraocular antiangiogenic therapy. For all such in-vivo applications, the magnetic drug carrier must be biocompatible and nontoxic23. The MTT assay results revealed that there was no reduction of growth of monocytes where as the growth had increased in all the concentrations proportionately.  This showed that the nano particles were not toxic to the human monocytes and also it could have been used as a growth promoting substance for its growth.

The previous reports suggested that only less percentage of toxicity was showed by the magnetic nanoparticle towards the human cells24. Whereas the negligible rate of toxicity was exhibited by high concentration of magnetite itself or due to surface functionalization using various chemical compounds. Thus, the toxicity level has varied based on the nature of functionalizing agents that are used for surface functionalization of magnetites25.

I. Arulpandi and S. Kanimozhi *