ABSTRACT: Snakehead fish powder containing albumin has macromolecule size which is difficult to penetrate into membrane cell. So, It was formulated into nanoemulsion utilizing the best comparison of surfactant, co-surfactant and oil. Nanoemulsion of snakehead fish powder was characterized by particle size analyzer. The snakehead fish were extracted by atomizer (-40 °C, 1atm) to gain powder which was formulated into nanoemulsion by spontaneous emulsification method using the best comparison of oleic acid, propylene glycol and Tween 80 (1:10). Propylene glycol was added into Tween 80 and oleic acid and stirred until homogeneous mixture. Then water, containing 0.125% of snakehead fish powder, was added drop by drop until becoming a transparent solution by sonication. It was characterized by UV-Vis Spectrophotometry and Particle Size Analyzer. The results of this research showed that snakehead fish nanoemulsion generated clear, stable, and translucent formula having the transmittance value of 100%. The characterization results described nanoemulsion had the average particle size of 147.63 nm. Meanwhile, the average of polydispersity index and zeta potential values were 0.234 and 13.38 mV. This means that nanoemulsion was stable having a uniform particle size, pH 5.5, and the viscosity value of 136.7 cP. The results of the evaluation and preparation stability test showed a good level of stability with the viscosity and pH by one way ANOVA analysis which did not change significantly.

INTRODUCTION: In Indonesia, one of freshwater fish species having main function for human health is snakehead fish (Ophiocephalus striatus). It contains high protein such as albumin, amino acids and unsaturated fatty acids which are often used by people to accelerate wound healing with formation of new tissues 1. Besides that, unsaturated fatty acids in snakehead fish can regulate prostaglandin synthesis having important role in inflammation process and accelerating wound healing.

Prostaglandin is one of tissue products emerging inflammation reaction which can activate macrophage system strongly 2.

According to Tungadi (2011), snakehead fish powder had been formulated into macro emulsion cream for accelerating wound healing of post-operation in vitro. In general, this cream was physically unstable so that the emulsion system was easily broken by adding energy of oil, water phase and storage temperature. This problem can be solved by reducing particle size of active compounds and stabilizer use. The reduction of particle size or droplet oil-water can be done by making nanoemulsion with the comparison of surfactant, co-surfactant, and oil appropriately 3, 4. The snakehead fish powder can be formulated into emulsion dosage form because the contents of the fish consists of polar (water soluble protein) and nonpolar (fatty acid soluble oil) parts. Nanoemulsion can be used as transdermal drug delivery system which has to pay attention to penetration of drug active compounds because it has to be able to pass through the skin barrier i.e. stratum corneum.

Meanwhile, Tungadi, R. (2016) stated that snakehead fish cream (negative control) was difficult to penetrate through the stratum corneum. By testing on rabbits in vivo it can be seen that open wounds longer recover by using snakehead fish cream than penetrant enhancers such as propylene glycol (treatment group). This means that propylene glycol can accelerate the diffusion rate of albumin into stratum corneum which the amount of albumin around 50% compared to without penetrant enhancer about 5-7%. Therefore, snakehead fish powder was formulated into nanoemulsion 5.

Nanoemulsion can increase the diffusion rate of active compounds because it reduces the particle size or droplets from oil and water phase in the emulsion system. Smaller particle size can enhance extensive contact with the membrane cell particles and facilitate carrier particles for penetration into membrane cells.

MATERIALS AND METHODS:  Snakehead fish powder of pharmaceutical grade was gained by PT. Royal Medical Pharmaceutical, Indonesia, and was certified containing protein 85.6%, albumin 30.2%, omega-3 2.03%, omega-6 2.11% and omega-9 0.92% and polyunsaturated total 5.1% respectively. Basis of nanoemulsion consisted of tween 80 27.5% (surfactant), propylene glycol 22.5% (Co-surfactant), and oleic acid 5% (oil). All of them were bought from PT. Intraco Chemical. propyl paraben 0.02%,  methyl paraben 0.18% and BHT 0.1% were purchased from PT. Sentana Chemical. The UV-Vis Spectrophotometry was from Perkin Elmer (USA). The DelsaTM Nano having particle size of 1 nm – 0.7 mm (UK). In addition, a pH meter (Systronics model EQMK), a sonicator (Specta Lab, model UC 40) and a hot air oven (Memmert) were utilized in this study.

Optimization of nanoemulsion basis: The optimizations of nanoemulsion basis were made in different comparisons of surfactant, co-surfactant and oil. There were five formulas with the comparison of different concentrations between surfactant (tween 80), co-surfactant (propylene glycol) and oil (oleic acid) such as F1 (1:6), F2 (1:7), F3 (1:8), F4 (1:9), and F5 (1:10). Tween 80 and propylene glycol were mixed together utilizing magnetic stirrer for 30 minutes 250 rpm (the first mixture). After that, oleic acid was added to the first mixture while stirring and adding water drop by drop containing snakehead fish powder 0.1% then done sonication for 10 minutes. The same procedure was made for all formulas with different comparisons of tween 80, propylene glycol, and oleic acid.

Formula 5 was physically stable utilizing centrifugation method (3800 rpm; 5 hours). The formula did not segregate. Otherwise, formulas 1 to 4 gave cloudy appearance and showed segregation after centrifugation. Tween 80 as nonionic surfactant has high hydrophilic and lipophilic balance (15) so that it can be stable in an emulsion system with oil in water 9.  This surfactant has pivotal roles in nanoemulsion basis because it has a large surface area for reducing interfacial and surface tension causing the surfactant to be absorbed on interface phase. Regarding this, it can decrease the surface free energy by ruining globule and resulting small globule 10. The most surfactants are not able to reduce interfacial tension in emulsion so that it needs to add co-surfactant (Propylene glycol) which can increase the solubility of nonpolar groups 11. Besides that, it can intensify flexibility of surfactant film and fluidity of emulsion phase 12.

compounds such as albumin, protein, and amino acids to penetrate membrane cells. It causes the increase of the contact area between the carrier particles and the membrane cell 16. Regarding this, the carrier particles are easy to release active compounds into systemic circulation system causing the increase of bioavailability of snakehead fish nanoemulsion and the acceleration of wound healing processes. 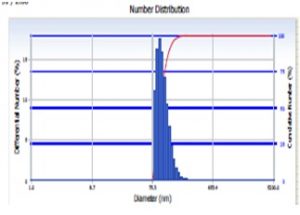 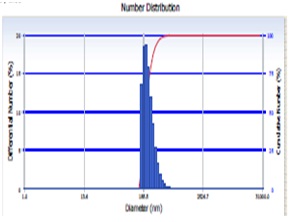 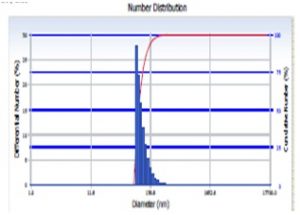 Meanwhile, the statistical analysis of freeze thaw method particularly pH (Table 4) and viscosity (Table 5) data showed that P value is greater than 1 which mean there is no real difference between pH and viscosity of the stability test.

CONFLICT OF INTEREST: The researchers declare no conflict of interest.