ABSTRACT: Ethylhexylglycerin is an alkyl glyceryl ether. This means that the ethyl hexyl group is bound to glycerin at one end by an ether linkage. it has been used as a common ingredient in bath products, body and hand products, cleansing products, deodorants, eye makeup, foundations, hair care products and suntan products. The compound is synthesized by esterfication of 2-Ethylhexanol and epichlorohydrin, followed by ring opening reaction of epoxy positioned at 1st and 2nd carbon in the chemical structure. It was characterized by NMR, seven -CH2 (position 10, 11, 9, 8, 6, 4 and 2) carbons present at negative side. Tertiary carbons are present at chemical shifts 39 ppm and 70 ppm (position at 7 and 3) and primary carbons are present at chemical shifts 10 ppm and 13 ppm (position at 14 and 12). Both primary and tertiary carbons were found on the positive side of the spectrum. From FTIR studies, peak corresponding to -OH stretch is observed at 3,391 cm-1 and the -OH bending is seen at 1,111 cm-1. By Mass characterization, the m/z value of the sample was found to be 204.9 (ES-) which represents Ethylhexylglycerin. The purity and impurity profile of material was achieved by GC-FID method with >99.0%.

INTRODUCTION: The ethylhexylglycerin is chemically 3-[(2-Ethylhexyl) oxy]-1, 2-propanediol with the molecular formula and molecular weight as C11H24O3 and 204.3 g•mol−1, respectively. It is widely used as an ingredient in cosmetics and in deodorants and is commercially marketed under the brand name sensiva® SC50 1. It also has anti-microbial activity, therefore, is also used as a preservative 2 - 3.

Literature review has revealed its synergistic effects with other preservatives as it boosts the efficacy of other preservatives 4 - 6. There have been minor cases reported 7 - 10 during the period of 1990 - 2015, when evaluated at two Belgian university patch test clinics, where 13 patients were presented with allergic contact dermatitis caused by ethylhexylglycerin 11.

However, due to its several properties and rare side effects, it has been a drug of choice in many formulations 12 - 14. There has been no literature where the drug was characterized. Therefore, the present study has been carried out to synthesize the ethylhexylglycerin using the starting materials as epichlorohydrin and 2-ethylhexanol and also to determine the physical properties of the drug followed by characterization with the help of GC-FID, FTIR, GC/MS and NMR spectroscopic methods.

MATERIALS AND METHODS: Acetone was obtained from RANKEM, India. Cadmium trichloride of NMR grade was purchased from MERK, India. 2-ethylhexanol and epichlorohydrin of GC grade were used as starting materials for the synthesis of ethylhexylglycerine were purchased from MERCK, India.

Synthesis of Ethylhexylglycerin: Ethylhexyl-glycerin was synthesized by using the starting material as 2-ethylhexanol. It was first mixed with the catalyst and epichlorohydrin was added drop wise under cooling. This resulted in the formation of 2-Ethylhexyl glycidyl ether. The second step was a ring opening step where, the obtained product was treated with water. As a result, the layers were separated to give the crude product. It was then purified to obtain the final qualified product which was characterized. The scheme is shown below in the Fig. 1.

Characterization: The synthesized Ethylhexyl-glycerin was subjected to identification and characterization was carried out with GC-MS, NMR and FTIR spectroscopic methods for the confirmation of the structure. Several tests that include solubility, appearance, odour, refractive index, density, water content and presence of impurities by elemental analysis were also performed. 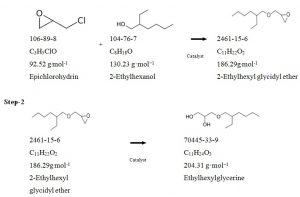 Solubility: Solubility is one of the most critical properties that have a significant impact on performance of a molecule. During this study, the sample was subjected with different solvents to determine its solubility. The solubility results were tabulated in Table 1.

Appearance and Odour: The state of a chemical has a big impact on its exposure route and distribution behavior in various environmental compartments. Usually, the state (solid, liquid, gas) for a chemical under normal conditions; 10 ml of the sample was taken in a 50 ml Nessler’s cylinder and was placed over white surface. It was then observed transversally in diffused light for the presence of foreign matters followed by observing odour with odour strips.

With the freshly prepared KF reagent, sample is dissolved in methanol and titrated with KF reagent. The moisture/water content is then calculated using the formula:

Where, V: Volume of Karl Fischer reagent consumed in the titration (ml).

W: Actual quantity of the sample taken (g or ml).

Boiling Point: The boiling point of Ethylhexyl-glycerin was determined in the laboratory by placing the 100 ml of sample in round bottom flask. It was then heated to observe bubbles flowing out of the tube. The contents of the tube were then allowed to cool and the temperature at which the liquid starts to flow into the tube was recorded as the boiling point.

Flash Point: Set a flash Series 3 instrument is used for closed cup. It is sealed with a lid through which the ignition source can be introduced periodically.

Elemental Analysis: Elemental analysis on carbon, hydrogen and Oxygen is the most essential, and in many cases the only investigation performed to characterize and / or to prove the elemental composition of an organic sample. Numerous compounds include no additional elements besides C, H and O, which is seldom determined separately to determine the percentage of Carbon, Hydrogen and Oxygen in the molecule. Determination of C/H/O was done using a "Vario EL III CHNSO Elemental Analyzer" by Elementar Analysen-systeme GmbH. The sample was subjected into the elemental analyzer (C, H and O). The instrument was calibrated with the analysis of standard compounds using the K-factors calculations. Thus the instrument ensures maximum reliability of the Results as the combustion gases are neither split nor diluted but directly carried to build in GC system. Simultaneous determination of CHO can be done in less than 10 min. This method finds greatest utility in finding out percentages of C, H, and O in organic compounds which are generally combustible at 1100 °C. The results are shown in the Table 3 with its respective spectrum in Fig. 7.

Presence of Related Compounds: A simple, economic, and time-efficient related substance by GC-FID method has been developed for the quantification of related substances present in the ethylhexylglycerin. For this study, GC with model number GC2025 of SHIMADZU was used.

Preparation of Standard Solution: Approx. 1 g of the ethylhexylglycerin was weighted exactly and transferred in to 50 ml volumetric flask. A measured volume of 1 ml of each 2-Ethylhexanol and 2-ethylhexyl glycidyl ether was added and finally made up to mark with 50 ml of Acetone.

Preparation of Sample Concentration: 1 g of the sample was weighed accurately and dissolved in 50 ml of acetone. The samples were then injected into the GC system on a DB-1 GC column with the carrier gas nitrogen at flow rate of 2.0 ml/minute and eluents were monitored by FID (Flame ionization detector) to determine the presence of other substances (impurities) related to ethylhexyl-glycerin. The data obtained was summarized in the Table 4. 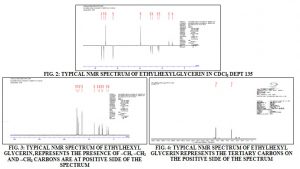 Therefore, the spectrum confirms the presence of two -CH3 carbons, two -CH carbons and seven -CH2 carbons present in the given sample. From FTIR studies, peak corresponding to -OH stretch is observed at 3,391 cm-1 and the -OH bending is seen at 1,111 cm-1 which is shown in Fig. 5. Therefore, from the NMR and FTIR spectrum, the spectral data confirms the structure of the molecule. By Mass characterization, the m/z value of the sample was found to be 204.9 (ESI+) which represents Ethylhexylglycerin. The spectrum is shown in the Fig. 5.

From the Elemental analysis results, the Ethylhexylglycerin has Carbon, Hydrogen and Oxygen elements. The % Results of these elements were exactly matching with % of each element present in molecule with respect to its Molecular formula. The following elemental data shown in the Table 3 and Fig. 7, the compound confirms to be Ethylhexylglycerin.

Related Compounds Study by GC: The estimation of impurity profiles of Ethylhexyl-glycerin and related materials is always a great challenge for the efficient chromatographic separation. In addition to producing stable and volatile compounds for the gas chromatographic analysis and the selectivity in gas chromatography is determined by the structure of the stationary phase and solute factors, such as polarisability, solubility, magnitude of dipoles and hydrogen bonding behavior. The flame ionisation detector has become one of the most popular measuring devices used in GC.

TABLE 3: THE PERCENTAGE OF CARBON, HYDROGEN AND OXYGEN PRESENT IN THE SAMPLE 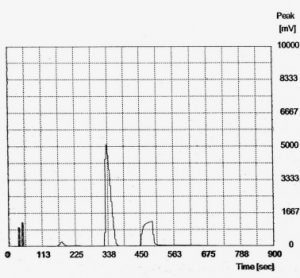 Its use is based on the measurement of variations in the ionisation current in a hydrogen-oxygen flame due to the presence of eluted substances. Chemionisation reaction occurs in the flame, assuming collision of neutral atomic excited states with molecules in their ground state. Based on the synthetic reactions involved in synthesis of Ethylhexylglycerin, identified the 2-Ethylhexanol and 2-Ethylhexyl glyceryl ether as process related impurities are present.

The Trend data of impurity profile as tabulated in the Table 4 represents the presence of 2-Ethylhexanol is <0.02% level and 2-Ethylhexyl glyceryl ether is <0.1%. The Typical GC Chromatograph is shown in the Fig. 8. 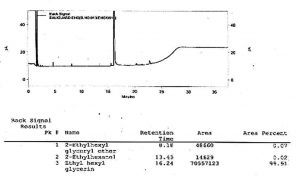 CONCLUSION: The manufacturing or synthesis of ethylhexylglycerin can be accomplished by traditional etherification technique. As would be expected an increased chain length translates into greater hydrophobicity. Ethylhexylglycerin, speci-fically has “limited solubility in water (≈ 0.1%), is highly soluble in organic solvents and has an estimated octanol / water partition coefficient of 2.4.This ingredient function is mostly as surfactants or skin conditioning agents in cosmetic products. Finally, the product is proven as ethylhexylglycerin by spectral characterization. The Purity of the product was >99.0% by this chemical route of synthesis.

ACKNOWLEDGEMENT: The authors are grateful to the management of Salicylates and chemicals Pvt. Ltd., Hyderabad for providing necessary facilities to carry out this work.

CONFLICT OF INTEREST: The authors declare no conflict of interest and none have received no payment in the preparation of this manuscript.