ABSTRACT: Culture dependent phenotypic characterization analyses were applied to study the protease producing bacteria from Indian Soda (Lonar crater). The uniqueness of the Lonar lake water is its salinity and alkalinity. A total of one hundred and fourteen bacterial cultures were isolated from the water and sediment samples collected from the hyper alkaline saline environment of Lonar lake. The thirty two bacterial strains were found protease producing bacterial culture, out of them strain EW2 was selected for 16S rDNA sequencing, production and partial characterizations of protease on the basis of their maximum proteolytic activity. The phylogenetic position indicated the strain was related to phylum Firmicutes. Optimum enzyme activity was found to be at 80 °C and pH 9.5. The protease was highly stable over broad temperature from 40 to 90 °C, pH 7.0 - 12.0, showing excellent thermostablity and alkaline tolerant nature. The enzyme activity has enhanced by all metal ion which was tested in this studies indicating it was a metalloenzyme but inhibited by organic solvent except acetone. This is valuable information for enzyme production and optimization of protease from Bacillus pumilus EW2 has bright future towards the improvement and production of novel enzymes for leather, detergent and pharmaceuticals industries and biotechnological potential.

Introduction: The extracellular enzymes are secreted by wild group of organism comprise fungi bacteria, yeast actinomycetes 1. Alkaliphilic micro-organisms, in particular Bacillus species, have attracted much interest because of their ability to produce extracellular metabolites that are active and stable at high pH. The unusual properties of these metabolites offer a potential opportunity for their utilization in processes demanding such extreme conditions 2.

The reason for this is their high pH exibiting range of pH 6 - 12 and temperature stability. Alkaline proteases belong to the group of serine proteases, or metalloenzyme 3. Those from Bacillus species have wide use and importance in several industrial economies such as in food, detergent and in the synthesis of biologically active peptides 4. Extre-mozymes have a great biotechnological potential, including agricultural, chemical and pharmaceutical applications 5, 6.

Due to the harsh condition in industrial production process, the present enzymes are not sufficient to meet most of the potential, so in last decades isolation and characterization of extremophiles have attracted attention 7. Halalkalophiles are salt-loving organisms survive in alkaline environment that inhabit hyper-saline alkaline environments. They are characterized by large amounts of NaCl saturation due to the evaporative concentration. The progression and formation of alkalinity and salts also concentrate, giving rise to an alkaline saline environment 8. Such type of condition generated in the soda lakes. Soda lakes are the most stable alkaline environments in the world, with pH values generally higher than 10 - 12 9.

The bacteria survive in the soda lakes are mostly alkaliphilic, it is to be considered that extracellular enzymes synthesized by alkaliphilic bacteria would be diligent under alkaline stipulations. These extremozymes are active in absence or presence of trace amount of some metal ions and such enzymes are of biotechnological potential 6. The Lonar lake is the great soda lake which is located in Lonar, District Buldhana, Maharashtra, India (latitude 19° 8, longitude 76° 36).

The alkaline Lonar crater is a unique basaltic rock meteorite impact crater, ranking third in the world and is filled with saline water having an average pH of 9.5 - 10. The Lonar lake was extensively studied for their bacterial diversity based on traditional and modern techniques with potential applications 10 - 13. In view of the above facts, the present study focused on the screening and characterization of extracellular protease production from Bacillus pumilus.

Enrichment and Isolation of Microorganisms: Lonar lake water and sediment sample were collected in sterile bottles and polythene bags respectively, from defined sampling site. Enrichment of water samples and sediment samples were carried out in Horikoshi I, Horikoshi II and nutrient agar at pH 10, nutrient agar at pH 10.0 with 30 g l - 1 sodium chloride. All flasks were incubated at 37 °C on a rotary shaker (100 rpm) for 48 h. After enrichment, well isolated and morpho-logically distinct colonies from these plates were transferred on the respective medium slants.

Identification of the Proteolytic Isolates: These isolates were identified in accordance with the methods recommended in Bergey’s manual of determinative bacteriology and diagnostic micro-biology. The identified strains were maintained on nutrient agar slants having pH 10 at 4 oC.

Enzyme Assay: The standard graph of tyrosine was prepared by adding different concentration of standard tyrosine (1 mg/ml). Estimation of proteases was carried out with 2.5 ml of casein in a test tube; 1 ml of enzyme source was added and incubated for 10 min at room temperature. After incubation 2 ml of TCA was added to stop the reaction and centrifuged the reaction mixture at 5000-8000 rpm for 15 min 19.

Partial Characterization of Protease: Partial characterization of protease from Bacillus was carried out by effect of pH, temperature, substrate, enzyme, metal ions and organic solvents on alkaline protease activity were then measured as per assay procedure.

Enzyme Stability in Presence of Solvents: Stability of the protease enzyme was determined in the presence of various organic solvents (10 mM each). 0.25 ml of organic solvent was added to 1 ml of the protease solution in a 1.5 ml micro centrifuge tube with a screw cap. The mixture was shaken at 150 rpm for 100 min at 37 °C. Then, the remaining activity was measured under the enzyme assay conditions.

Screening of Bacterial Isolates, Identifications and Characterization of Bacterial Cultures: There is very less studies were performed on the about the microbial diversity of hyper-saline alkaline Lonar crater especially from sediment and water characterized by alkaline and saline conditions. Bacillus EW-2, isolated from those microsites, shares with other alkaliphilic Bacillus species the capacity to grow at high pH values 20, 21. During a previous study carried out from 2008 to 2017, total one hundred and fourteen alkaliphilic bacterial cultures were isolated from Lonar lake 13, 22. In the present study, out of one hundred and fourteen, thirty two bacterial cultures were found with proteolytic activity. All the bacterial strains were found alkaliphilic. According to Bergey’s manual of systematic bacteriology, the isolates were identified as Bacillus sp. All the bacterial cultures were found gram positive and spore forming bacilli. Out of these thirty two, one bacterial isolate was selected for the further production and characterizations on the basis of their maximum proteolytic activity of Bacillus sp. EW-2. In the present studies the 16S rDNA analysis of isolates EW2 indicated that the bacterium affiliated to Firmicutes, which included family of bacilliace, belong to Bacillus pumilus EW2.

Effect of pH on Activity of Enzyme Protease: The effect of pH on protease activity of Bacillus pumilus EW-2 was determined by incubating the enzyme in different pH buffers ranging from 7 - 12 for 10 minutes at 37 °C. The enzyme was stable over the pH range of 7 - 12. The protease was active in a wide pH range with optimum activity at pH 9.5 and was stable over a broad pH range 7 - 12 with retention of more than 58 - 73 % of initial activity. The optimum activities of this enzyme were at pH 9.5 with 35 units/mL. The enzyme activity decreased dramatically at pH 10 (70%) and 12 (58%). The optimum pH range of alkaline proteases is between pH 9 and 11 23. Alkaline protease from Bacillus EW-2 novel feature in the extremozyme which can produce the protease at alkaline pH which was beneficial for biotechnological potential and industrial application.

The similar studies were performed by Sookkheo et al., 24 reported from thermophilic Bacillus stearo-thermophilus TLS33, optimum pH values of 8.5.To determine the optimum pH for enzyme activity, reactions were performed at various pH but optimum activity was found at pH 9.0 for Elizabethkingia meningoseptica KB042 isolated from chicken feathers by Nagal et al., 25. 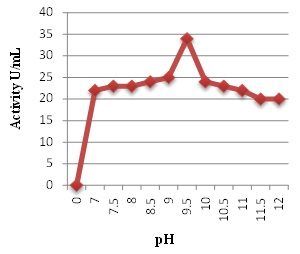 FIG. 1: EFFECT OF pH ON PROTEASE

FIG. 2: EFFECT OF TEMPERATURE ON PROTEASE 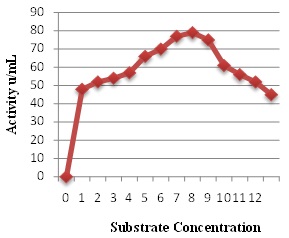 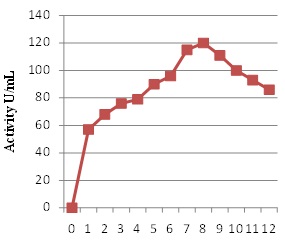 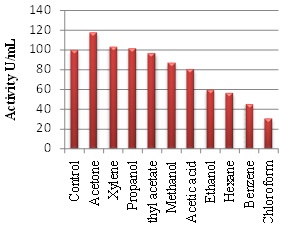 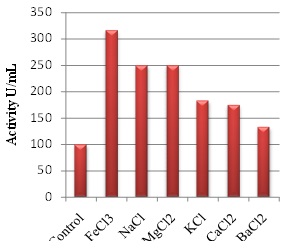 CONCLUSION: The Bacillus pumilus EW-2 strain isolated and extracellular synthesis of thermostable alkaline metalloprotease. Effects of metal ions and enhance the activity indicated that the alkaline protease belongs to the family of serine proteases. The optimum temperature at 80 °C and pH 9.5 for protease activity thereby give an opportunity to its biotechnological potential and to take super advantage in leather, detergent and pharmaceuticals industries as an eco-friendly.

CONFLICT OF INTEREST: Author has no conflict of interest.