INTRODUCTION: Principally, it was observed that the drugs developed from natural sources mainly come from microorganisms and terrestrial plants. However, marine organisms are the alternative sources to discover novel bioactive compounds 1.

Secondary metabolites are organic compounds synthesized in living organisms using primary metabolites. These compounds are specific for each and every organism species within a phylogenetic group.

Macroalgae are the potential sources of primary metabolites and secondary metabolites which are extensively evaluated using bioassays and pharmacological studies 5, 6, 7. Many secondary metabolites are produced from intermediates and end products of secondary metabolism which are grouped into terpenes, phenolics, and alkaloids 8, 9. Seaweed resources such as polysaccharides, lipids, proteins, carotenoids, vitamins, sterols, enzymes, antibiotics and many other fine chemicals are used as major metabolites for human benefits 10, 11, 12. Ulva fasciata contains sphingosine derivatives that have in-vivo antiviral activity 13. Extract of Ulva lactuca has anti-inflammatory and antitumour compounds 14. The secondary metabolites from Ulva fasciata and Hypnea musciformis enhance the bacterial clearance capability of the hemolymph of shrimp and Penaeus monodon 15.

Portieria hornemannii contains halogenated monoterpene called halomon, which is cytotoxic in nature 16. The Codium iyengarii is a potential source of steroidal glycosides known as iyengarosides A and B 17. Sargassum carpophyllum is the source of two bioactive sterols. Which induces morphological abnormality in the plant pathogenic fungus (Pyricularia oryzae) and exhibits cytotoxic activity against several cultured cancer cell lines 18. Laminaria and Sargassum species are used in China for the treatment of cancer. Undaria contains antiviral compounds which inhibit the herpes simplex virus. Corralina species are rich sources of calcium carbonate and hence are used in bone replacement therapies 19. Brown seaweeds produce terpenoids, acetogenins, and other aromatic compounds 20, 21, 22, 23, 24.

Macroalgae from temperate and polar regions produce high concentrations of polyphenols called phlorotannins 25, 26. Isoprenoid and acetogenin derivatives recognized from red seaweeds are useful as defensive metabolites 27, 28. Bryopsidales are probable sources of sesquiterpenoid and diterpenoid compounds 24. Several marine secondary metabolites have antifouling strategies due to their capability to inhibit the growth, attachment, and settlement of other marine organisms 29, 30, 31. Seaweed extracts are being used for the treatment of asthma, thyroid, goiter, urinary infections, stomach ulcers, and even tumors. Sulfated polysaccharides such as carrageenan, agar, agarose, and furcellaran have wide applications in medicines. Carrageenan obtained from Chondrus, Eucheuma, Gigartina, and Iridea has an effective therapy for gastric and duodenal ulcers 32, 33. Fucoidan obtained from Gracilaria corticata, is used for colorectal and breast cancer treatments 34. L-kainic acid obtained from Digenea simplex is used in treatments of cancer, inflammation, and infectious diseases 35. Phenolic compounds produced by Rhodomela confervoides, Symphyocladia latiuscula and Polysiphonia urceolata have antidiabetic activity. They inhibit the activity of protein tyrosine phosphatase (PTPase), which is a responsive factor for insulin. Polyphenolic compounds obtained from Laurencia undulate used for the treatment of asthma 36.

Sulfated polysaccharides from Ulva pertusa, Capsosiphon fulvescens, and Codium fragile have immune-modulating activity for stimulating macrophages 51. The ethanolic extracts of Codium tomentosum have antigenotoxic and antioxidant activity 52. Ethanolic extract from Codium decorticatum has antibacterial activity 53. The methanolic extract of Ulva linza has high inhibitory activity against inflammatory response due to the presence of high polyunsaturated fatty acids (PUFA) 54.

Extraction of Secondary Metabolites: Seaweeds were collected and washed thoroughly with distilled water to remove unwanted impurities and other debris. They were allowed to dry for few days under sunlight. After drying, each macroalgae species was cut into small pieces and made into a coarse powder with the help of a mechanical grinder. Dry powder from each algae (Ulva lactuca, Ulva faciata, Acanthophora dendroides, Padina tetrastromatica, Cystoseira indica, and Gracilaria corticata) was filled in a thimble and was subjected for extraction in a soxhlet extractor. Extraction was carried out in different solvents starting from nonpolar solvents (petroleum ether and n-hexane) to semi-polar solvents (chloroform and acetone) and finally polar solvents (methanol and water) at 70 °C using a soxhlet extractor. After extraction, samples of methanol extract were concentrated using a rota evaporator. Then, concentrated samples were subjected to LC-MS analysis for the characterization of secondary metabolites.

Data Acquisition and Processing: All LC-MS data were converted to the mzdata format. Data preprocessing was performed using MZmine 2.23. Fragmentations were gathered with the corresponding precursor ions. Precursor ions of the metabolites were identified by using the MET-LIN metabolite database (http://metlin.scripps.edu/). 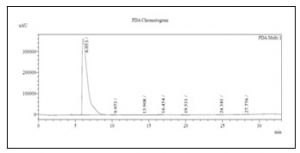 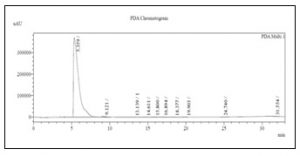 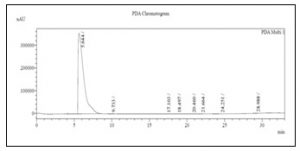 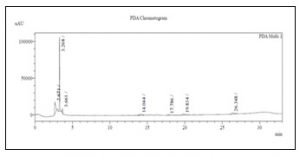 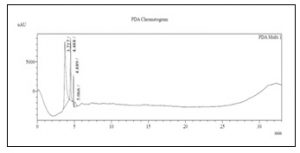 ACKNOWLEDGEMENT: Authors are heartily thankful to the Department of Biosciences, Saurashtra University, Rajkot for providing facilities to carry out present research work.

CONFLICTS OF INTEREST: Authors declare that there is no conflict of interest regarding the publication of this research article in the Journal